It was raining and a chilly 56°F when I left the Ingalls Homestead at 1:00.  I drove past more lakes and wetlands for 38 miles on 14E, while the Mama Mia! cast sang of having a dream and pushing through darkness for another mile. I passed Lake Sinai and then arrived in Brookings, population 22,943.

I went through the Subway drive-through to pick up a late lunch; it took forever, but a girl needed to eat. 🙂

Brookings is home to South Dakota State University; the South Dakota Art Museum is a small but beautiful museum on the campus.  On this day, there were four stunning exhibits.

The first exhibit was Harvey Dunn (1884-1952).  Dunn was an American painter and teacher.He was born near Manchester, South Dakota, on March 8, 1884.  The son of homesteaders, he attended school in a one-room schoolhouse with his brother and sister and helped his parents with farming.

In 1901, Dunn began studying art at South Dakota Agricultural College (Now South Dakota State University).  After a year, he enrolled at the School of the Art Institute of Chicago, which he attended from 1902 to 1904; there he met the famous illustrator Howard Pyle, who became his mentor from 1904 to 1906.  He became a commercial illustrator and during World War I, he was chosen by the American Expeditionary Forces to document and illustrate the war for purposes of propaganda, recruitment and public education. After he returned from the war, his interest in commercial illustration declined.

Beginning in 1925, Dunn started making regular treks back to South Dakota from where he was living in New Jersey. It was during this period, from 1925 to 1950, that he created the bulk of what would become known as his prairie pioneer paintings.

He is best known for his prairie-intimate masterpiece, The Prairie is My Garden. In this painting, a mother and her two children are out gathering flowers from the quintessential prairie of the Great Plains. 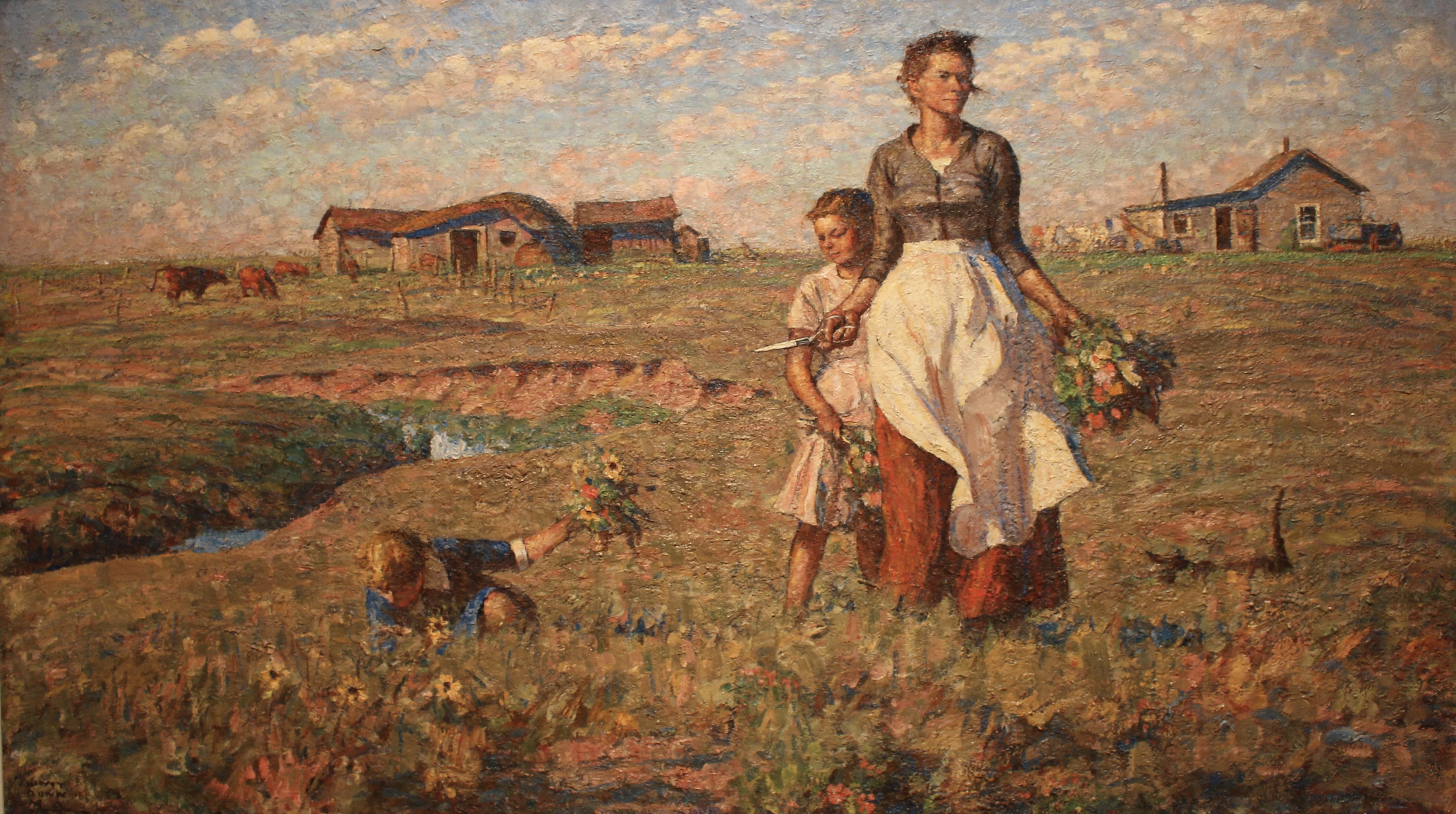 The Prairie is My Garden 1950 by Harvey Dunn

The exhibit celebrated the artist’s desire to fully, deeply and sensitively render truths about humanity through his depiction of others. He emphasized the importance of empathy.  I loved the amazing paintings The Prairie Is My Garden (1950), After School, After the Blizzard, and Jedediah Smith in the Badlands. The captivating paintings depicted people and nature fluid in their interactions.

After the Blizzard, n.d. by Harvey Dunn

Jedediah Smith in the Badlands, 1947, by Harvey Dunn 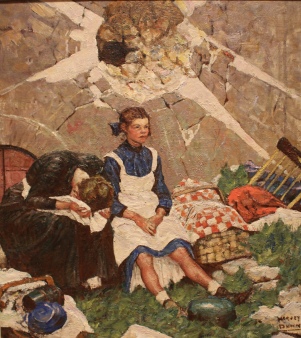 The Return, n.d., by Harvey Dunn 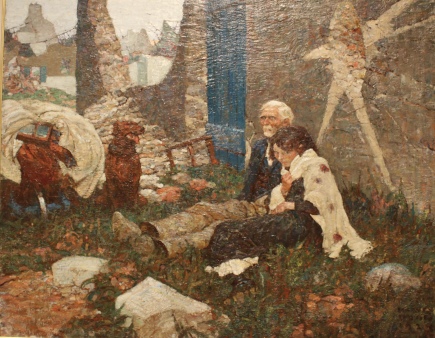 Battleground (The Refugee), 1920 by Harvey Dunn 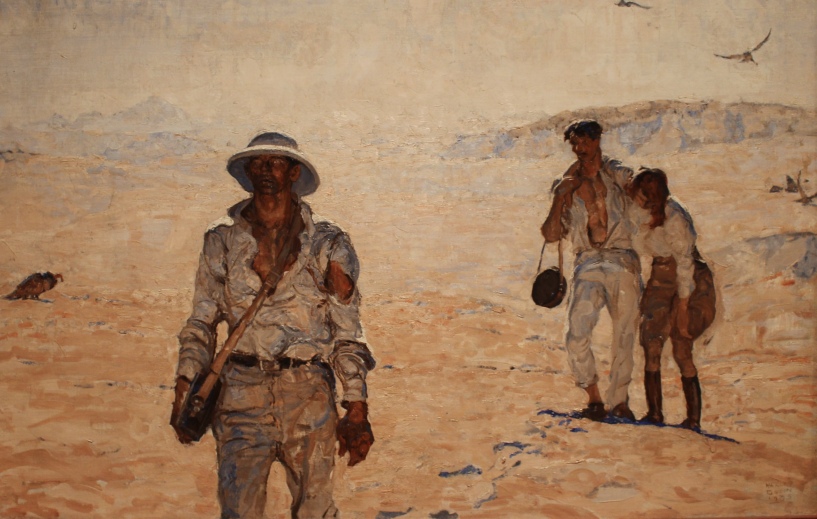 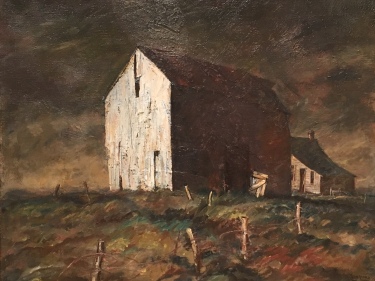 Another exhibit was on Afghan War Rugs: the modern art of Central Asia.  Women wove rugs into rich pictorial images that recount a broader and more contemporary story of their land.

Purchased throughout Central Asia and Europe, the over 40 rugs in this collection were selected for their exceptional quality, rarity, and surprising content.

Western interest in rugs and carpets from Afghanistan grew in the 19th century and has continued largely unabated despite civil wars, Soviet intervention, and foreign attempts to mitigate war. But war rugs – rugs with armaments or examples of modernity – are the latest artistic iteration in a long history of traditional hand-woven works from Central Asia. Ethnic communities such as the Baluch, Turkmen, and Hazara teach us about Afghanistan, its history and politics, foreign involvement in the country, and evolution of design in rugs and carpets.

War rugs are unique to Afghanistan and northern Pakistan, to which many weavers fled following foreign invasions and civil war.  Some feature maps, portraits of military heroes, monuments or cityscapes, but the most avidly collected examples showcase weaponry and armaments. Machine guns, assault rifles, bombs, mines, tanks, war planes, and drones figure prominently. War rugs produced after 1979 derive their imagery from television broadcasts, propaganda posters, and first-hand observation of a country under siege (from a plaque at the exhibit). 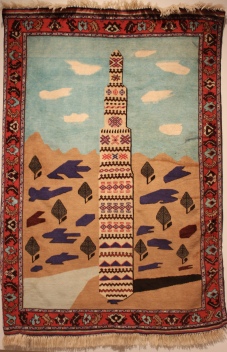 Rug with the Minaret of Jam acquired in Peshawar (Pakistan), 1991 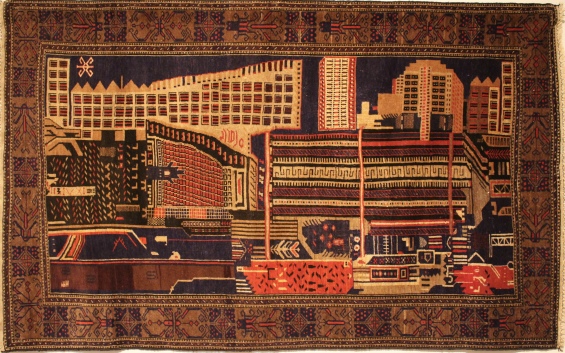 Rug with Map of Afghanistan, Acquired in Peshawar (Pakistan), 2006

Rug with Map of Afghanistan, Acquired in Peshawar (Pakistan), 2007

Another fascinating exhibit was A Life’s Work: Paul Goble (1933-2017) Illustrations of American Indian Stories.  Paul Goble was born in England in 1933. He grew up in a family where art and literature were valued and encouraged. He grew up with a deep fascination for the indigenous people of North America.  As a young man, he made several visits to the U.S. to spend time on reservations in South Dakota and Montana.  Goble moved to America permanently in 1977 and became an American citizen in 1984.  He died in the Black Hills of South Dakota in 2017.

Throughout his career, Goble won countless awards for his writing and artwork.  In 1979, he received the Caldecott Medal, which is one of the most prestigious awards in all of children’s literature. His Caldecott winner, the illustrated children’s book The Girl Who Loved Wild Horses, is just one of over 40 books in a career extending back to his first title, Red Hawk’s Acocunt of Custer’s Last Battle, published in 1969. Throughout his career, Goble focused on Plains American Indian history and retellings of traditional American Indian stories.

Paul Goble has given his original paintings to the South Dakota Art Muusem. The art displayed was from his different books and different stages of his career.

He and his wife, Janet, live in Rapid City, South Dakota.

Illustration from The Legend of the White Buffalo Woman, 1998 by Paul Goble

Illustration from The Return of the Buffaloes, 1996, by Paul Goble 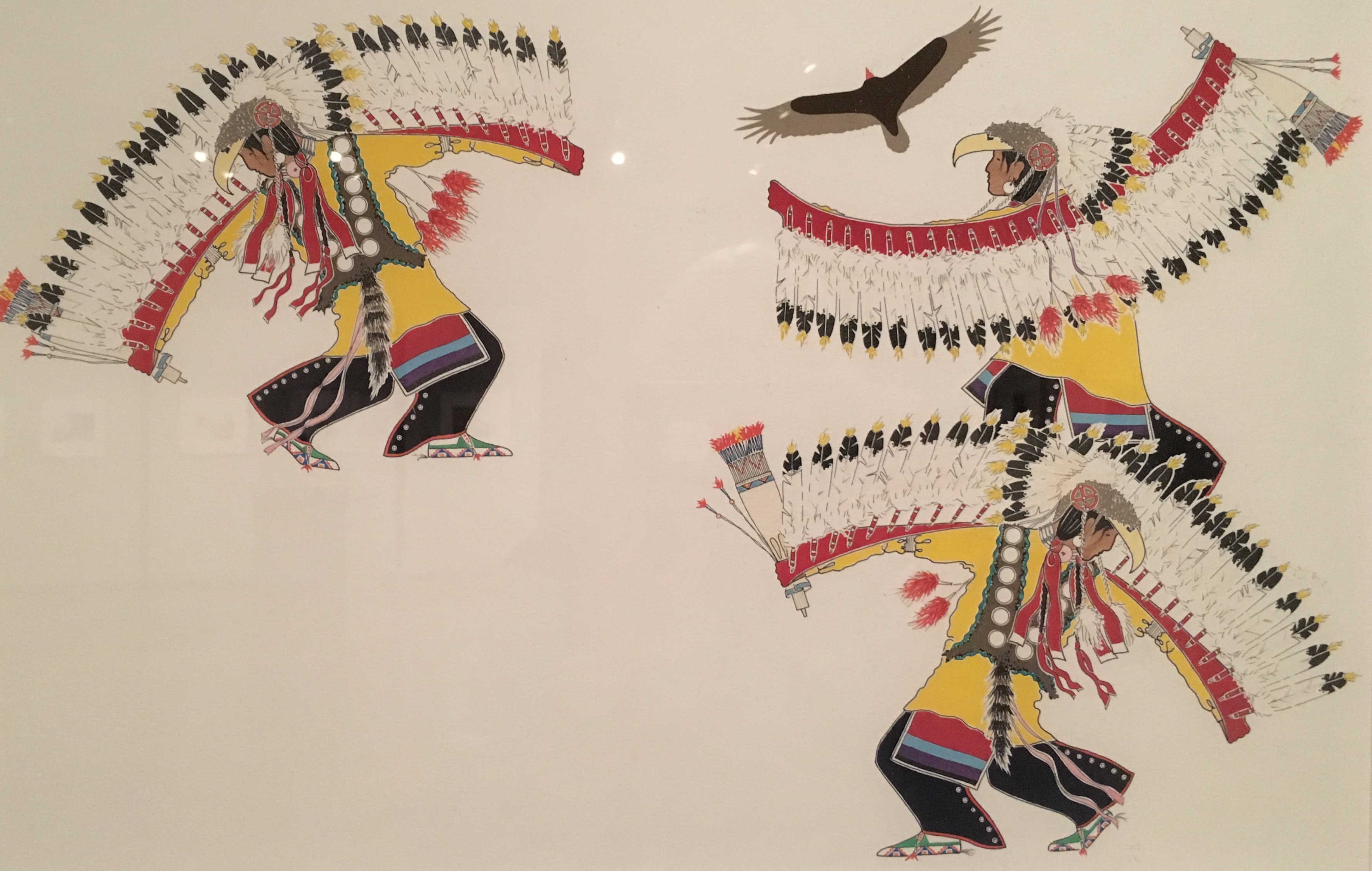 Illlustration from Iktomi and the Buzzard, 1994 by Paul Goble

Illustration from Her Seven Brothers, 1988 by Paul Goble 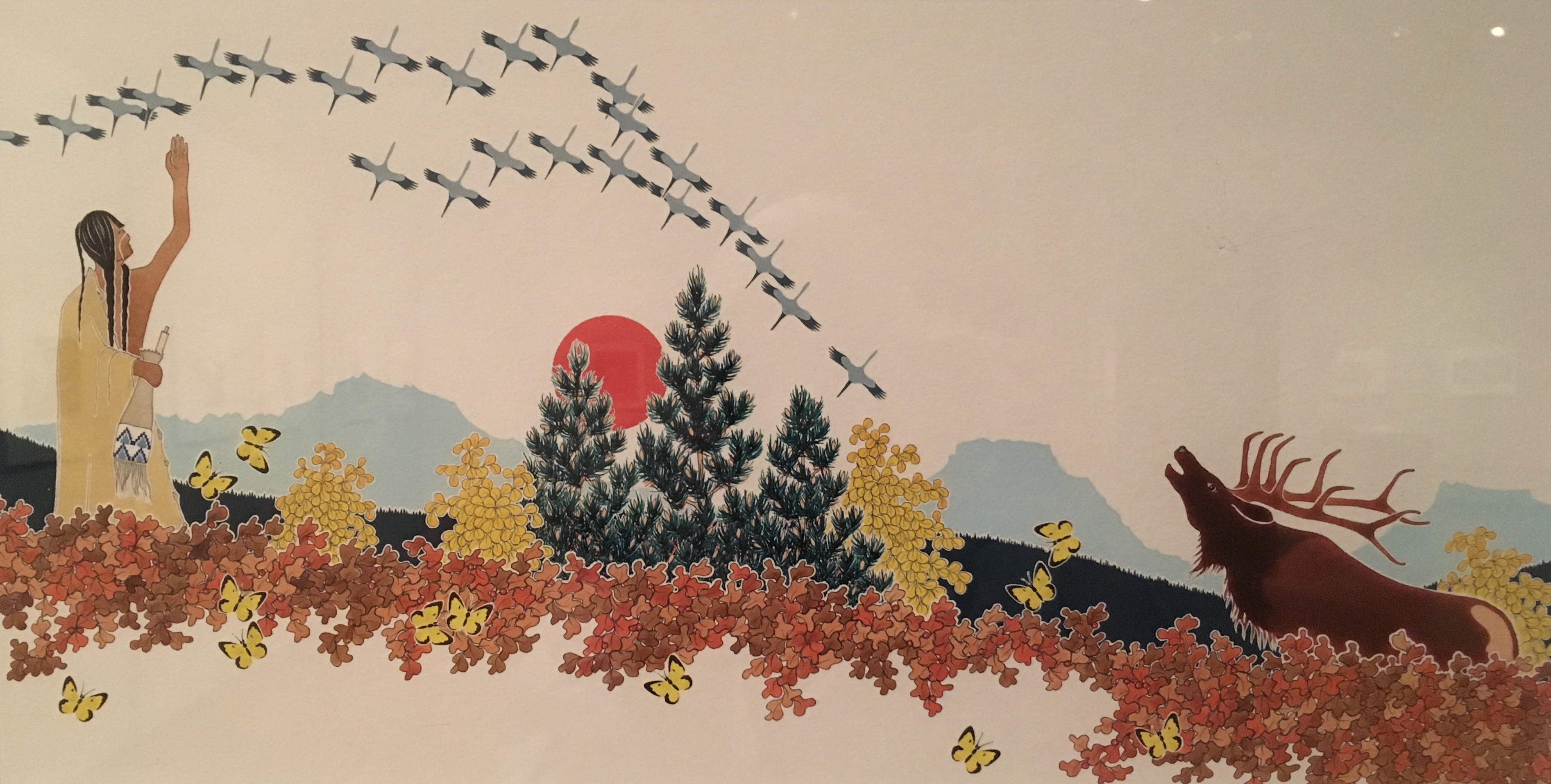 Illustration from The Great Race, 1985 by Paul Goble

Nelson’s artwork appears in books, greeting cards, and CD covers.  He has served as the author and illustrator for 11 children’s books.  His books have received the American Indian Library Association Honor Book Award in 2016, and many other awards. He has lectured at the National Museum of the American Indian in Washington, D.C.

Nelson is a member of the Standing Rock Sioux tribe of North and South Dakota.  His paintings offer a fresh contemporary interpretation of traditional Lakota images. 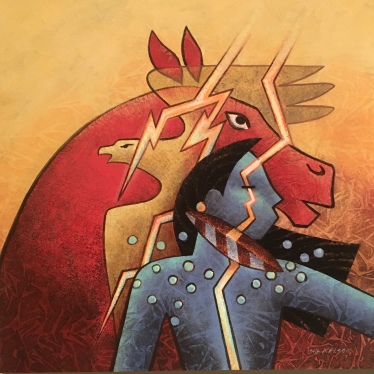 Dancing Beneath the Stars by S.D. Nelson (Illustration from The Star People: A Lakota Story, 2003)

The Tree of Life by S.D. Nelson (Illustration from Black Elk’s Vision: A Lakota Story, 2010) 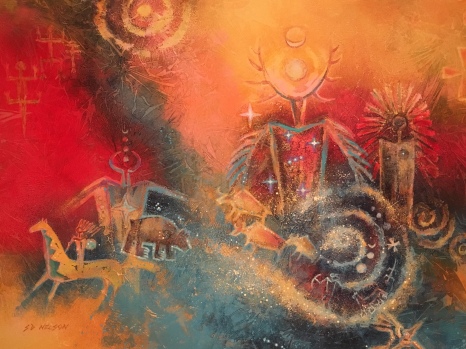 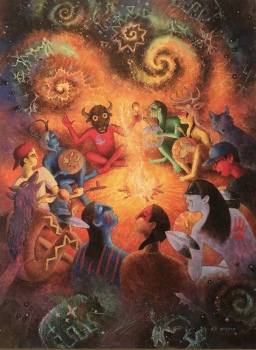 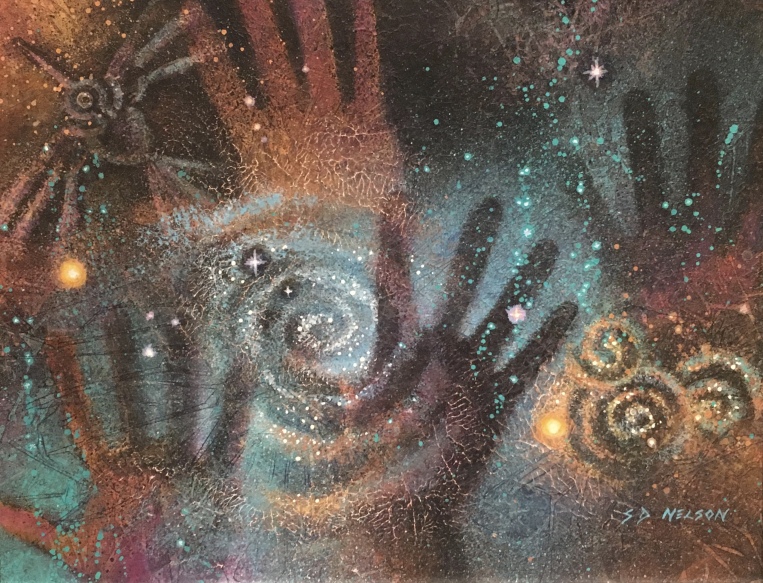 Beyond the Many Stars by S.D. Nelson

The Battle of the Little Bighorn by S.D. Nelson (Illustration from Black Elk’s Vision: A Lakota Story, 2010) 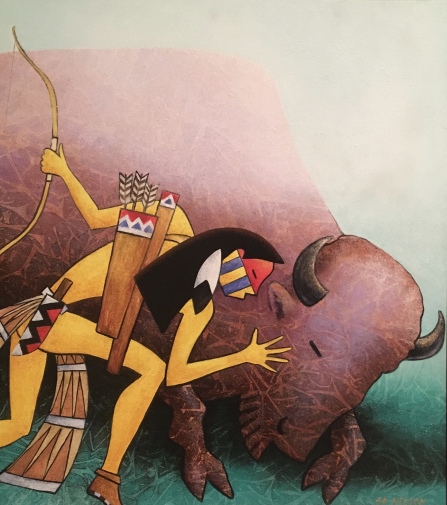 Last, I stopped in at the South Dakota Agricultural Heritage Museum, also on the campus.  It is dedicated to the preservation and interpretation of South Dakota’s agricultural history and rural heritage. There I found giant harvesters, tractors, and displays of engines. It showed the evolution of farming technology. I still didn’t understand how all this equipment was used in farming, but it certainly was an impressive collection. 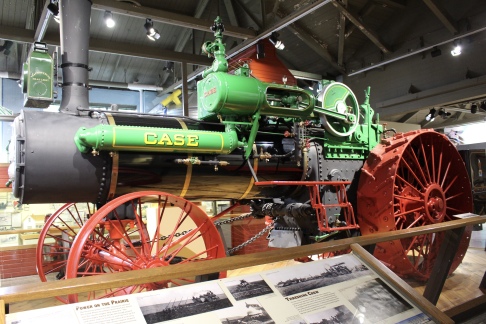 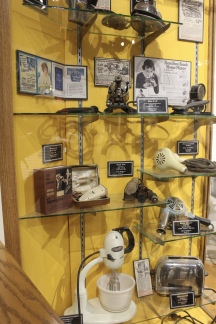 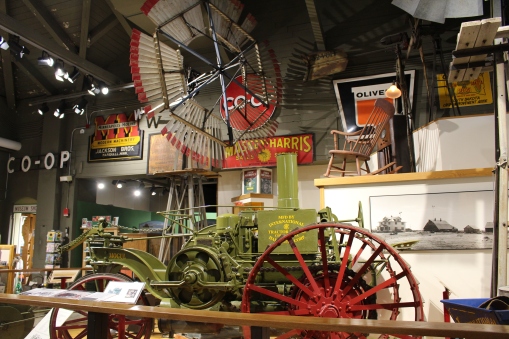 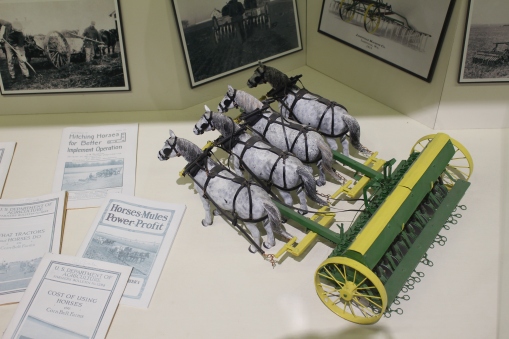 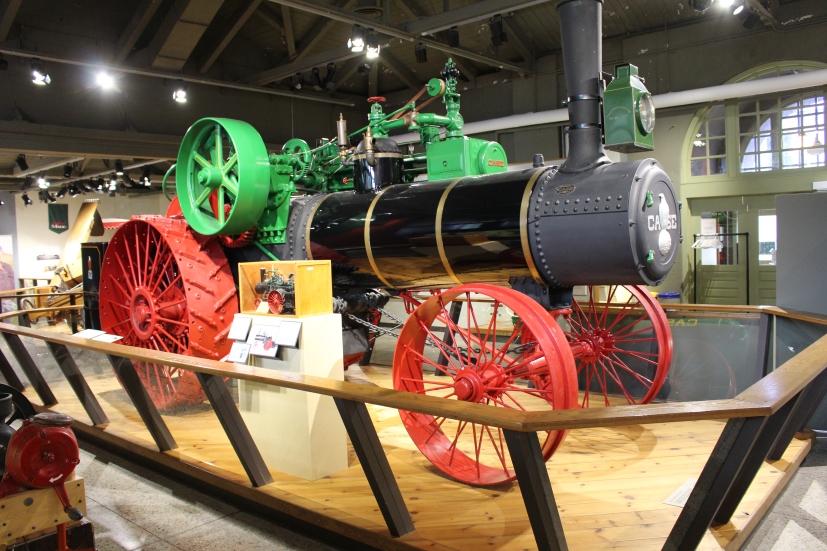 I got on 29N, once again in the midst of cornfields. I got behind a wide load and couldn’t pass.  I arrived in Watertown, population 21,482, at 4:20. I checked in at the Quality Inn & Suites Watertown.

I ran out for an early dinner at Dempsey’s Brewery Pub & Restaurant.  I had French onion soup that was too salty, a Blue Moon, and a side house salad. The food was mediocre.

Here is my journal spread for this day. 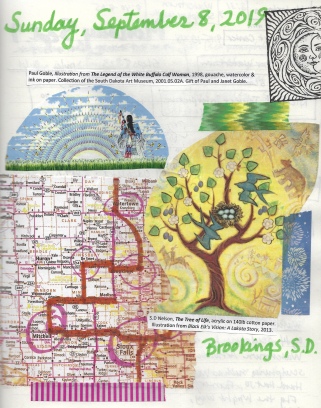 Information from the exhibits at the South Dakota Art Museum is from plaques and brochures created by the museum.