Monday, I hightail it down the highway, while fields undulate out the window and smokestacks belch.  Out the car window, Maryland, Pennsylvania, New York rush by in a blur. I cruise, snagged by small town speed limits, and then accelerate across ribbons of asphalt through northern states. Finally, I traipse through the streets of Elmwood Village, mosey into Talking Leaves Books, where books whisper stories, a butterfly journal calls my name and Postcards talk of the End of America.

Tuesday, I’m on a small bus tour of Niagara Falls, the New York side.  Texans in the group bemoan the need to be politically correct and wonder what I, a Virginian, think about the furor over Confederate statues. Pready’s Indian accent wafts over the microphone.  On the Maid of the Mist, in our blue ponchos, we’re assaulted by a typhoon.  Under Bridal Veil Falls, we watch as folks in embattled yellow ponchos climb red stairs against the force of wind stirred up by the raucous falling water. In the semicircle of Horseshoe Falls, we bob in a spot of relative calm, mesmerized and gripping the rails, as the water rushes madly over the precipice looming overhead.

Later, we enter the maelstrom at Cave of the Winds ourselves, bracing against the catapulting gales and showers.  We whoop and holler with a mixture of delight and terror.  Drenched ponchos whip around, flapping against legs, heads and bodies.

Wednesday night, I’m startled by what sounds like a gunshot outside my Moonlite Motel room. I never find out what it is. In the morning, rain sputters from a gloomy sky as I bump over potholed roads and peeling yellow lines on my way to Prospect Point. There, at the top of American Falls, volumes of water rush seamlessly over boulders and trees and plummet over the cliff.  At Terrapin Point, I stand at the brink of Horseshoe Falls and see the tumultuous water tumble headlong into a rising plume of mist.

On the Canadian side, I walk to the brink of Horseshoe Falls, where clear aquamarine water glides over the crest; I’m mesmerized by the calm before it devolves into a tempest below.  All nationalities jostle for space at the railings – Chinese tourists taking self-obsessed photos, Muslim families speaking Arabic, women wearing headscarves. They’re chattering, laughing, exclaiming. People are on the move, in Canada, in the U.S. – back and forth across the Rainbow Bridge. There are more diverse nationalities in Canada.  This is the way of the future, people migrating, in flux – immigrating, emigrating –  and nationalities blending, although many are fighting hard against it.

On Thursday, I walk downriver along the White Water Walk; the unnavigable rapids here churn in confusion and disorder. They’re unruly, untamed.  A couple of platforms are slightly above water level, but the river won’t be contained. It sloshes and churns over the platform, soaking our feet. Later, I don a red poncho for Hornblower Cruises, where I stand near the front and get doused under the self-perpetuating storm of Horseshoe Falls.

In the afternoon, butterflies in the Conservatory flit about, impossible to capture on camera.  Later, drinking Tempranillo out of silver espresso cups, we watch as a rainbow rises from the mist and stitches itself like woven translucent threads across the blue sky. 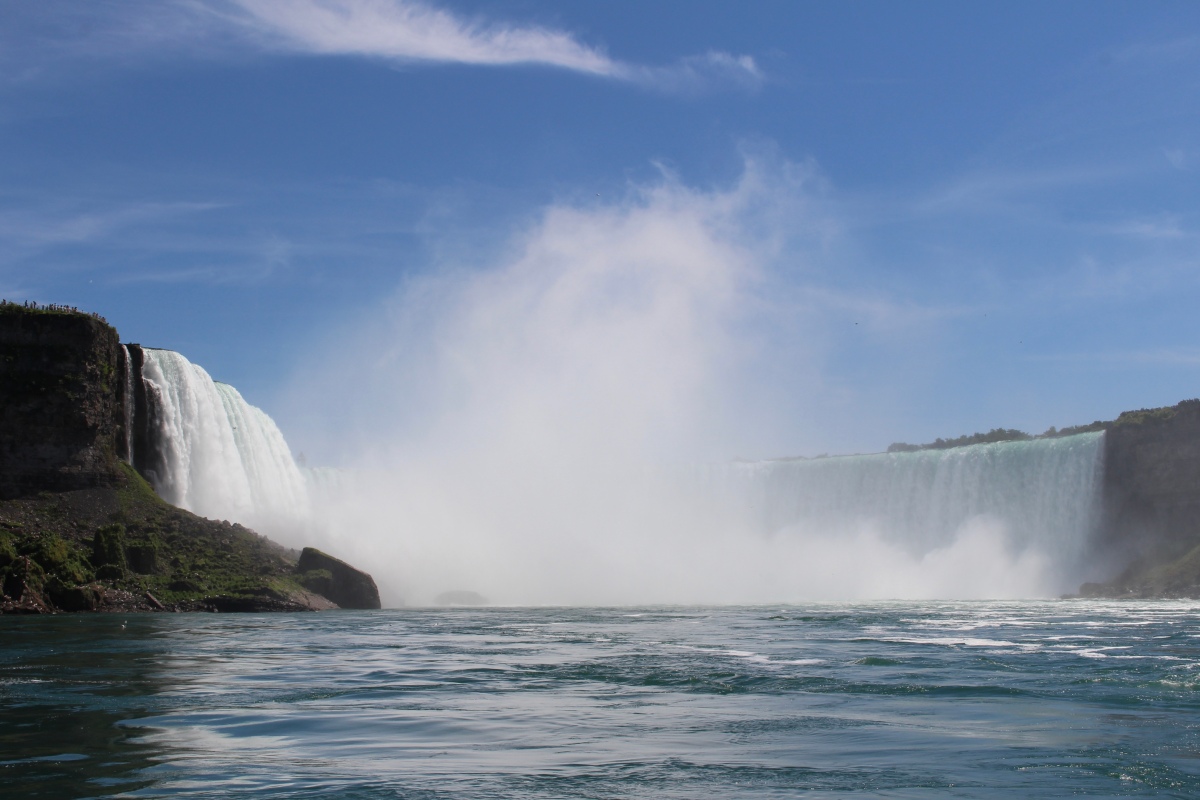 Horseshoe Falls from Maid of the Mist

American & Bridal Veil Falls from Maid of the Mist

Maid of the Mist and American & Bridal Veil Falls 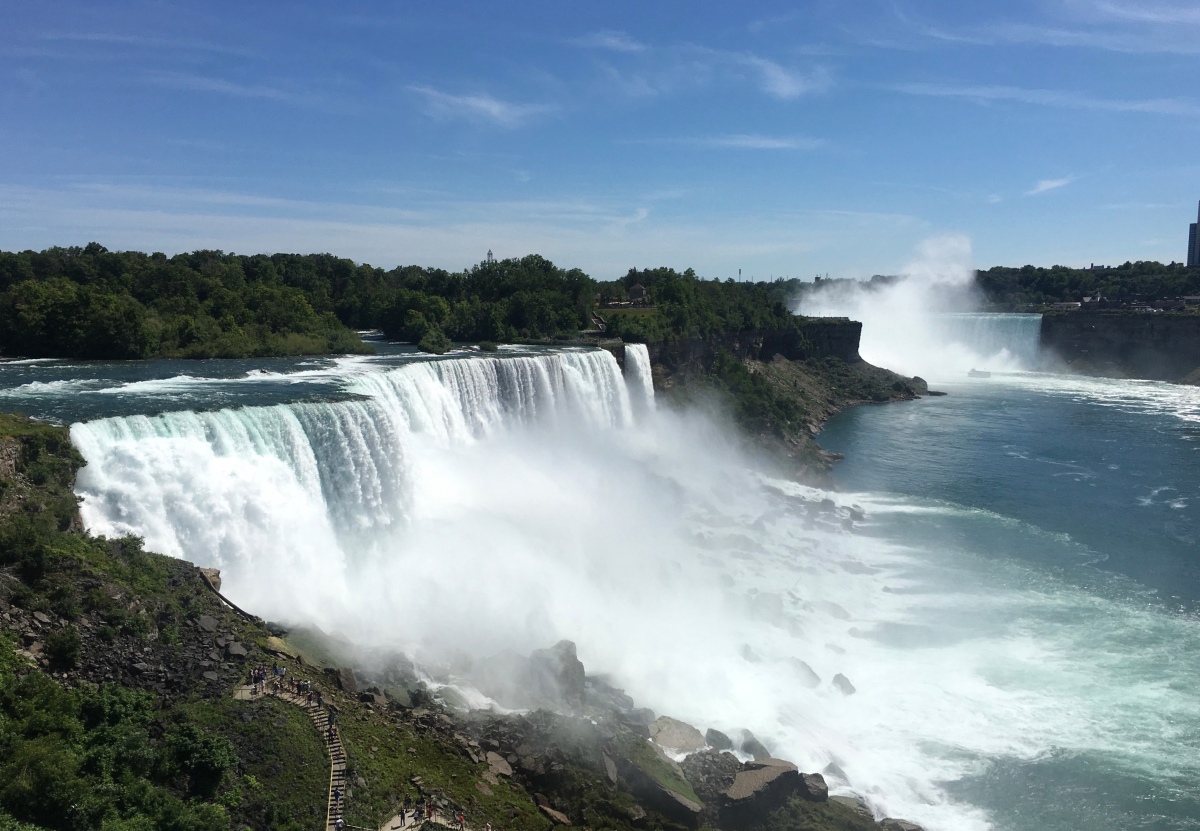 Niagara Falls from the Observation Tower

Bridge across the upper American Falls 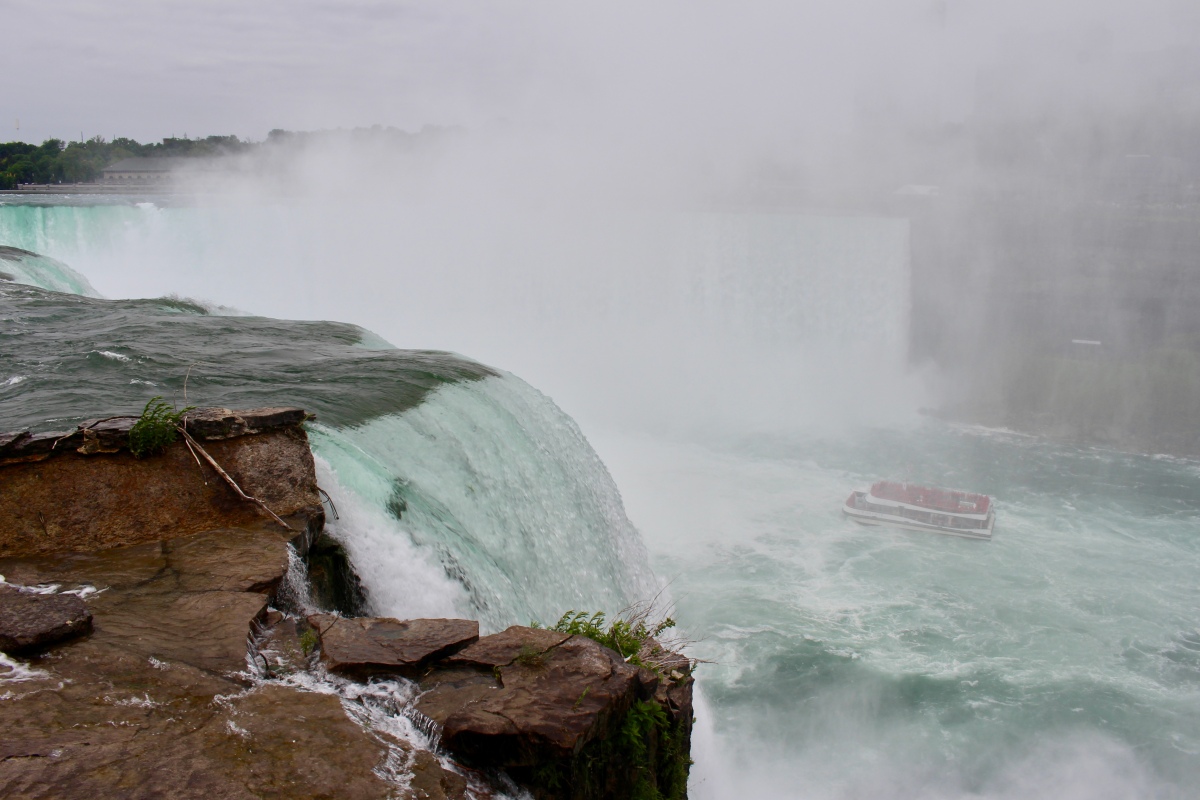 Horseshoe Falls from American side 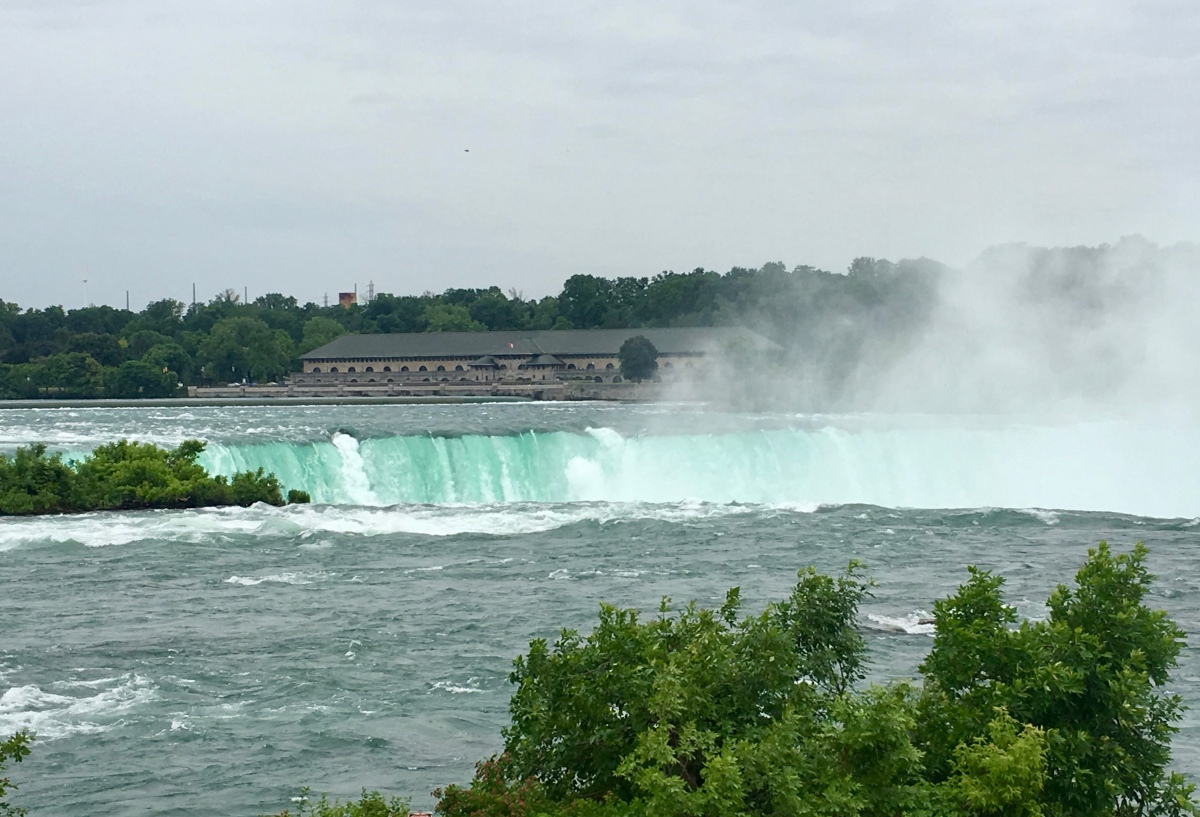 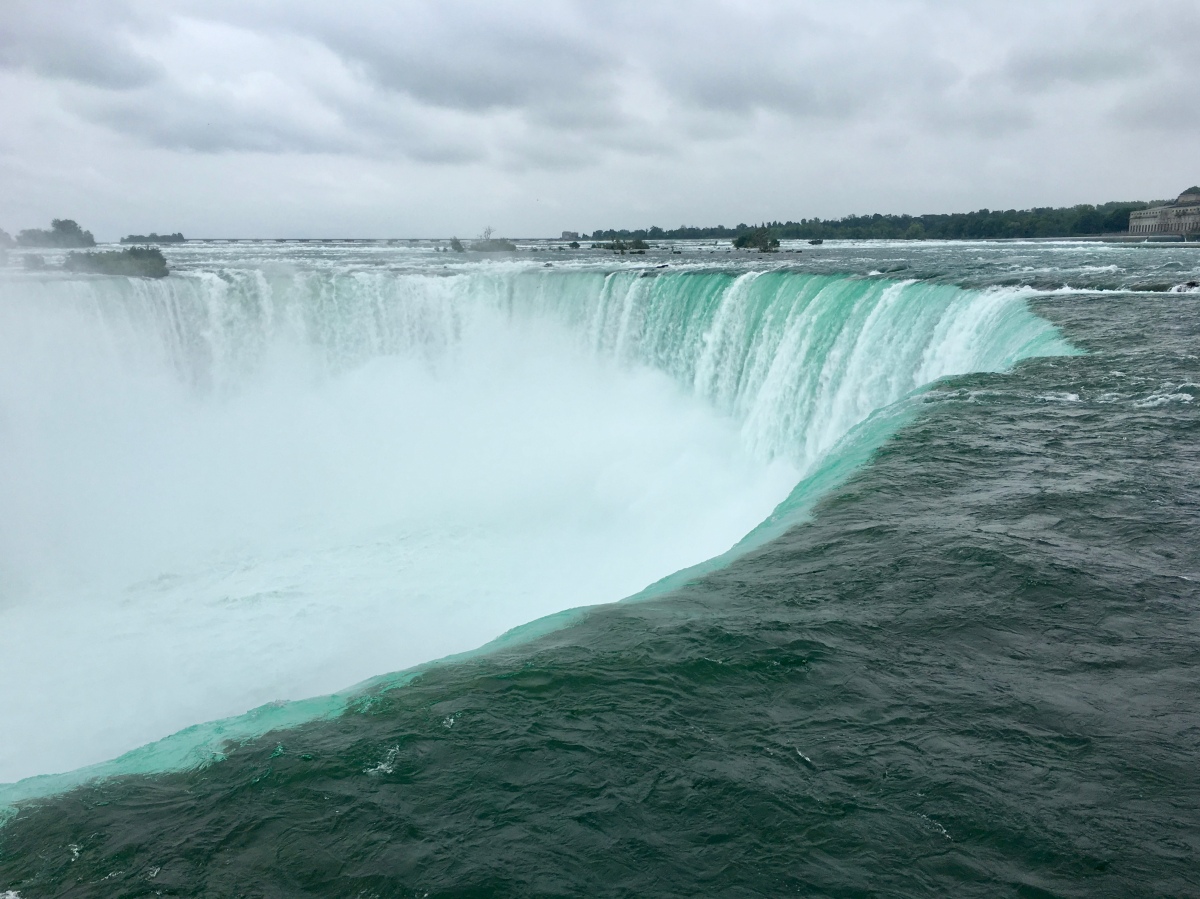 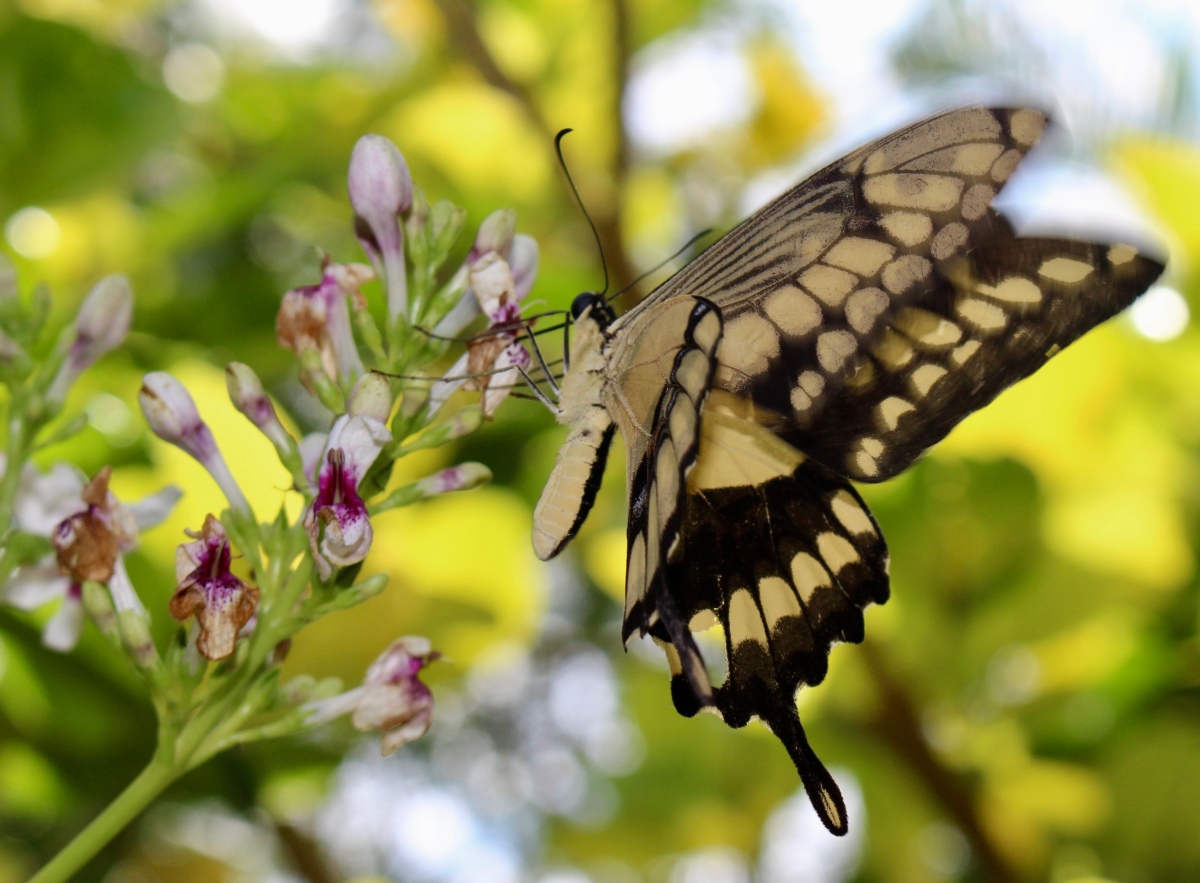 At the Butterfly Conservatory

At the Butterfly Conservatory 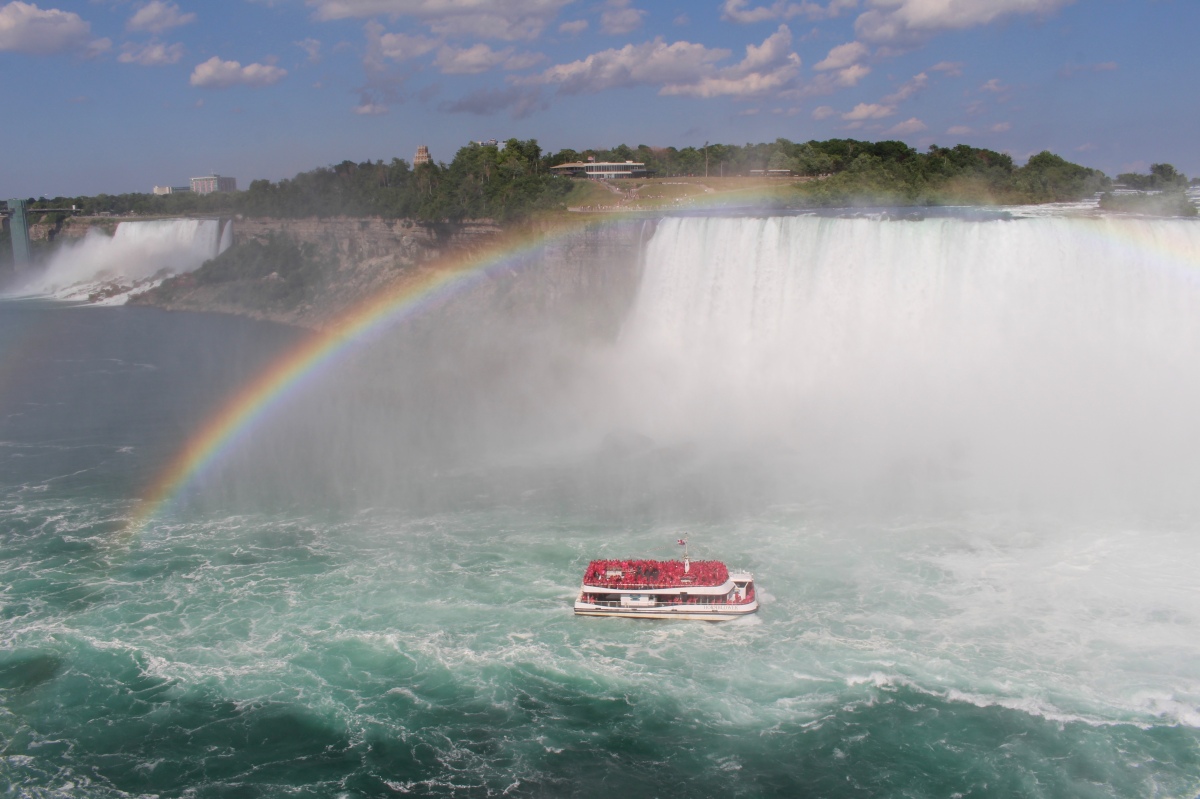 “PROSE” INVITATION: I invite you to write up to a post on your own blog about a recently visited particular destination (not journeys in general). Concentrate on any intention you set for your prose.  In this case, one of my intentions for my trip to Niagara Falls was to write about movement and sound, using strong verbs and imaginative language.

Include the link in the comments below by Monday, November 26 at 1:00 p.m. EST.  When I write my post in response to this invitation on Tuesday, November 27, I’ll include your links in that post.