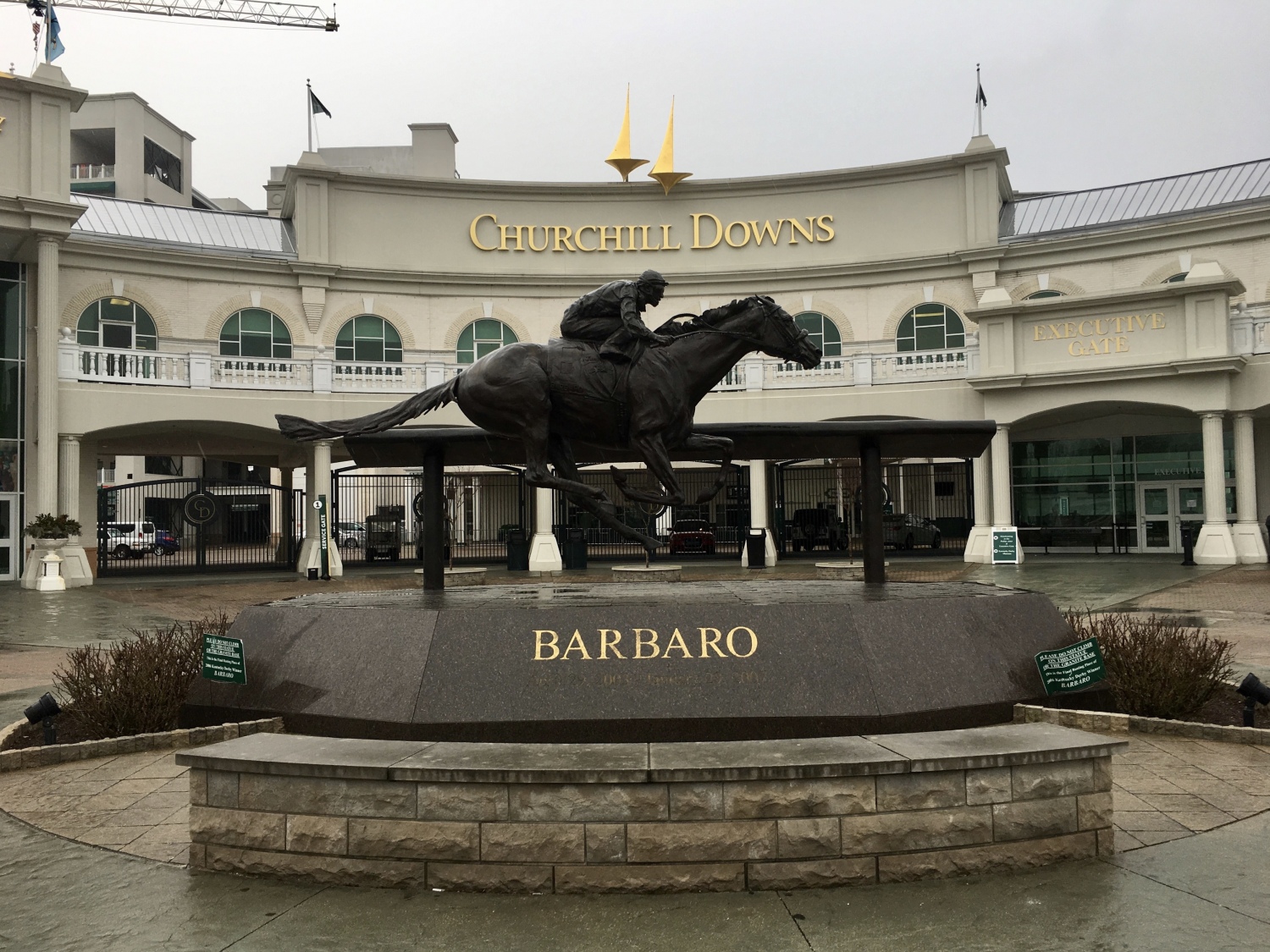 I tried to be optimistic as I left my sister’s house in southern Illinois to drive to Louisville, Kentucky, but the dreary, frigid and damp weather — 28°F with icy rain — didn’t help my outlook. My moods tend to vary drastically depending on the weather, and it didn’t help that at the last minute my sister backed out because of a problem with her dog Babe, who she planned to bring along. Steph isn’t much of a traveler anyway, so I guessed it was for the best.

After saying my goodbyes at 9:10, I drove through DeSoto in freezing rain, and the car was soon caked in ice.  Loreena McKennitt sang “Beneath a Phrygian Sky,” which dangled elusive dreams of The English Patient and Turkey all rolled into one.  The song put me in an optimistic state of mind until the brown eddies of the Little Muddy River quickly pulled me back into the gloomy winter landscape.

I passed silver silos and red chicken coops dotting miles of farmland. I assumed the large silver cylinders with cone tops were silos, although I didn’t know if that’s what they were properly called.  A silo is a structure used in agriculture to store grains or fermented feed known as silage. I didn’t know if the things I saw were silos or grain elevators. My farm lingo was challenged, to say the least.

In the town of Hurst, population 800, I wondered what treasures hid in Dave’s Man Cave.  In the town of Bush, population 300, a sorry-looking area surrounded T&T Recycling. Just past Royalton and Ziegler were two flags: a U.S. flag and another that said TRUMP 2020. Ugh. I passed Plumfield Christian Church and Kreative Kitchens & Baths as my wipers pounded against a frame of ice accumulating around the windshield’s edges.

I headed north on Rt. 57 and it was 29° and still raining ice as I passed Rend Lake. Before long, I was on I-64 heading east. My gas tank was getting low so I stopped at a Citgo, but all the pumps were closed. The proprietor of the Citgo informed me I’d have to drive 35 miles to the next station on I-64.  The other option was to drive six miles each way off course to Wayne City, which I did.  I figured I could make it six miles but didn’t know if my tank could carry me 35 miles.

I pushed the inside lever to open the gas tank but it was frozen over with a solid sheet of ice.  I attacked the ice encasing the gas cover with my sturdy ice scraper. Then I went to work breaking up the ice buildup on the windshield. I felt like some kind of crazed maniac as I stabbed at the ice.

Finally, I was back on the interstate, a flat stretch of highway over soggy and boggy land, flat and every shade of brown. I was lucky it wasn’t snowing and that the highway wasn’t icing over. I passed Burnt Prairie and AntQ Mall Antiques, the Little Wabash River and Mt. Carmel.  Just before noon, I got a Welcome to Indiana: Crossroads of America.

In Indiana, I crossed the Big Bayou River, then drove past New Harmony and Mt. Vernon.  Industrial sized water sprinklers hovered over the land and silos hunched, sodden, in the fields. Past Stateline Fireworks and the Black River, I stopped at a rest area to assail the ice that had built up again on the windshield. Then it was on past Poseyville, Cynthiana and Evansville.  A Monastery offered prayers and a gift shop, and I supposed I should have stopped for a dose of optimism.

I called the Frazier Museum in Louisville to see what times the Kentucky Show! was playing.  I figured I’d have to visit there tomorrow as I’d have a hard time making the last show at 3:00.  I continued past Jasper, Birdseye, and Winzerwald Winery.  I crossed into Eastern Standard Time, which put me at 2:15. I passed Marengo, Leavenworth, Indiana Caverns and Squire Boone Caverns, Palmyra and Corydon.

It was 3:07 by the time I passed the Kentucky state line: Welcome to Kentucky: United We Stand, Divided We Fall.  Despite the continual testing of my threadbare optimism, I made it to Louisville and got to the Kentucky Derby Museum by 3:20. 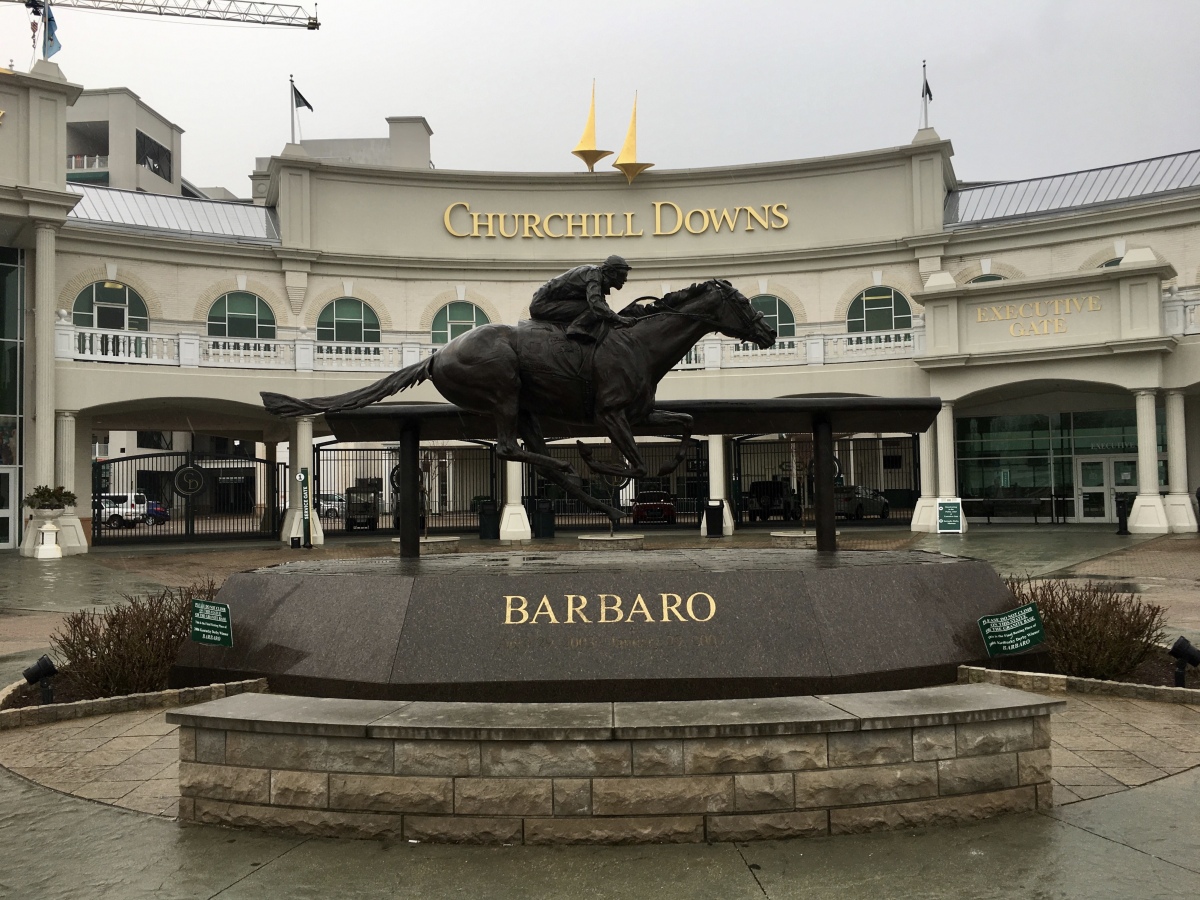 At the Museum, I joined a tour of the outdoor racetrack at Churchill Downs. It was a miserable hour in the freezing rain, but I learned a thing or two: that the Kentucky Derby has been run every year since 1875; that it is run on the first Saturday in May; the whole event goes from 8 a.m. to 8 p.m., in which time there are 14 horse races, the Derby being the 12th.  Only three-year-old Thoroughbreds can run in the race, a distance of one and a quarter miles (2.0 km). After horses win, money multiplies as they breed and sire colts, anywhere between $175,000 – $500,000 for each shot, with a colt guaranteed. If an offspring becomes a champion, the sire’s fees can be raised. 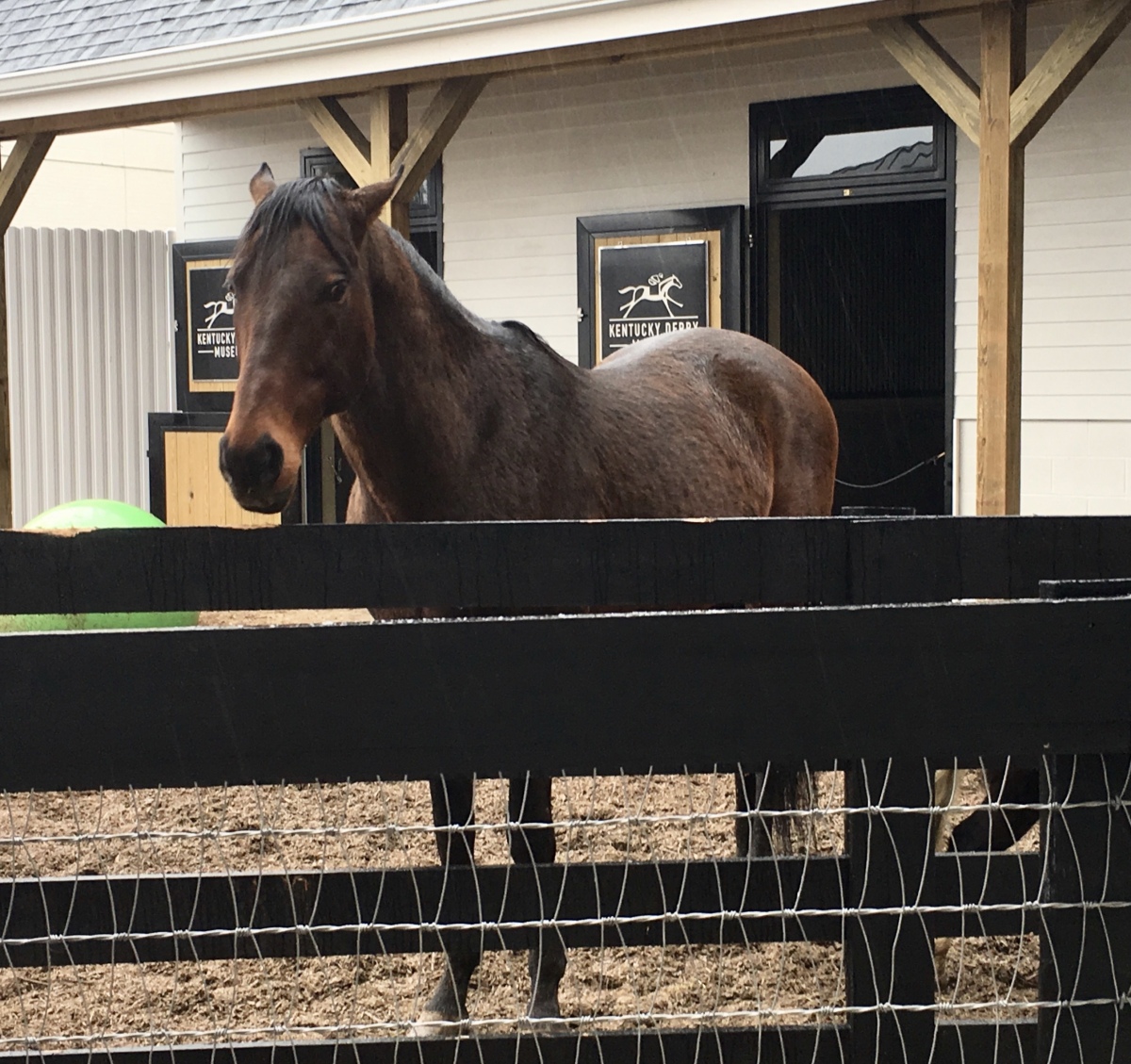 a horse on display at the Kentucky Derby Museum 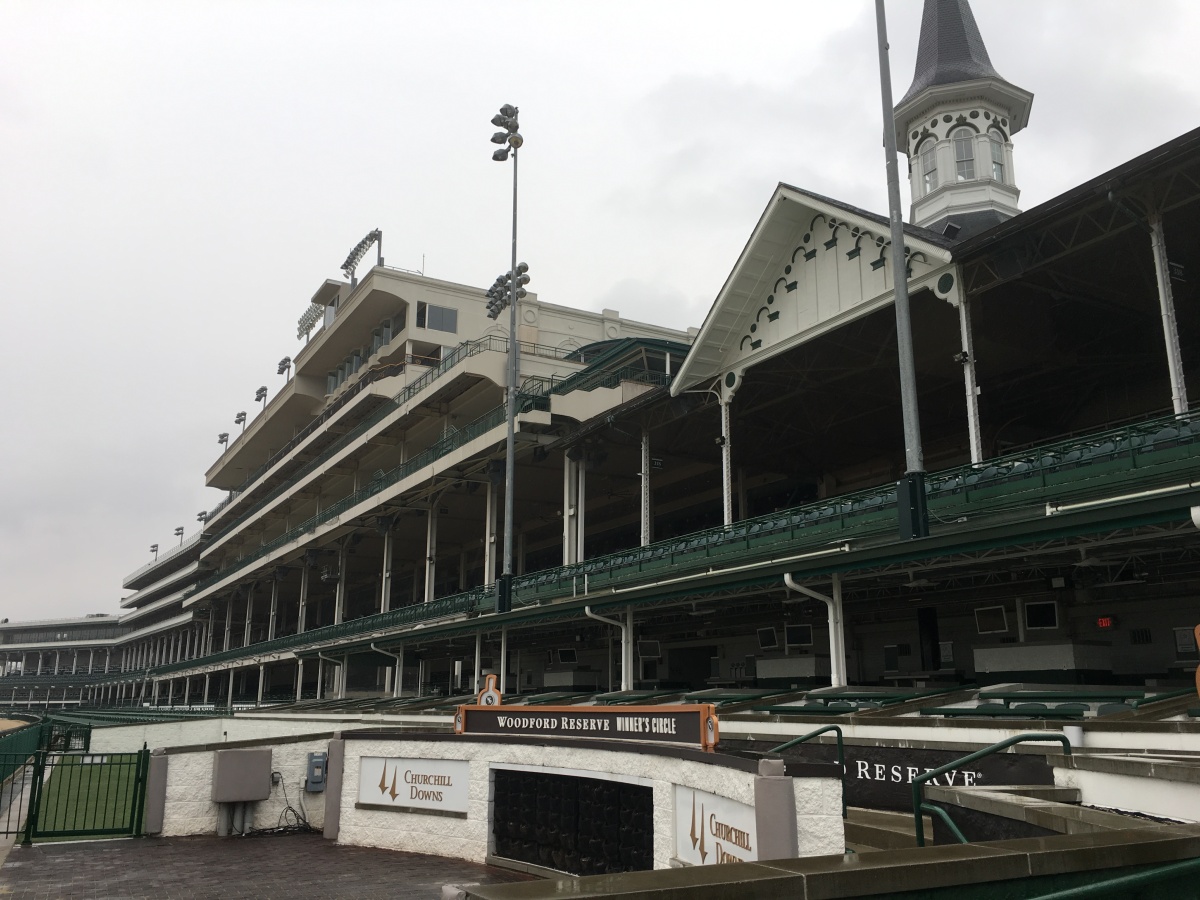 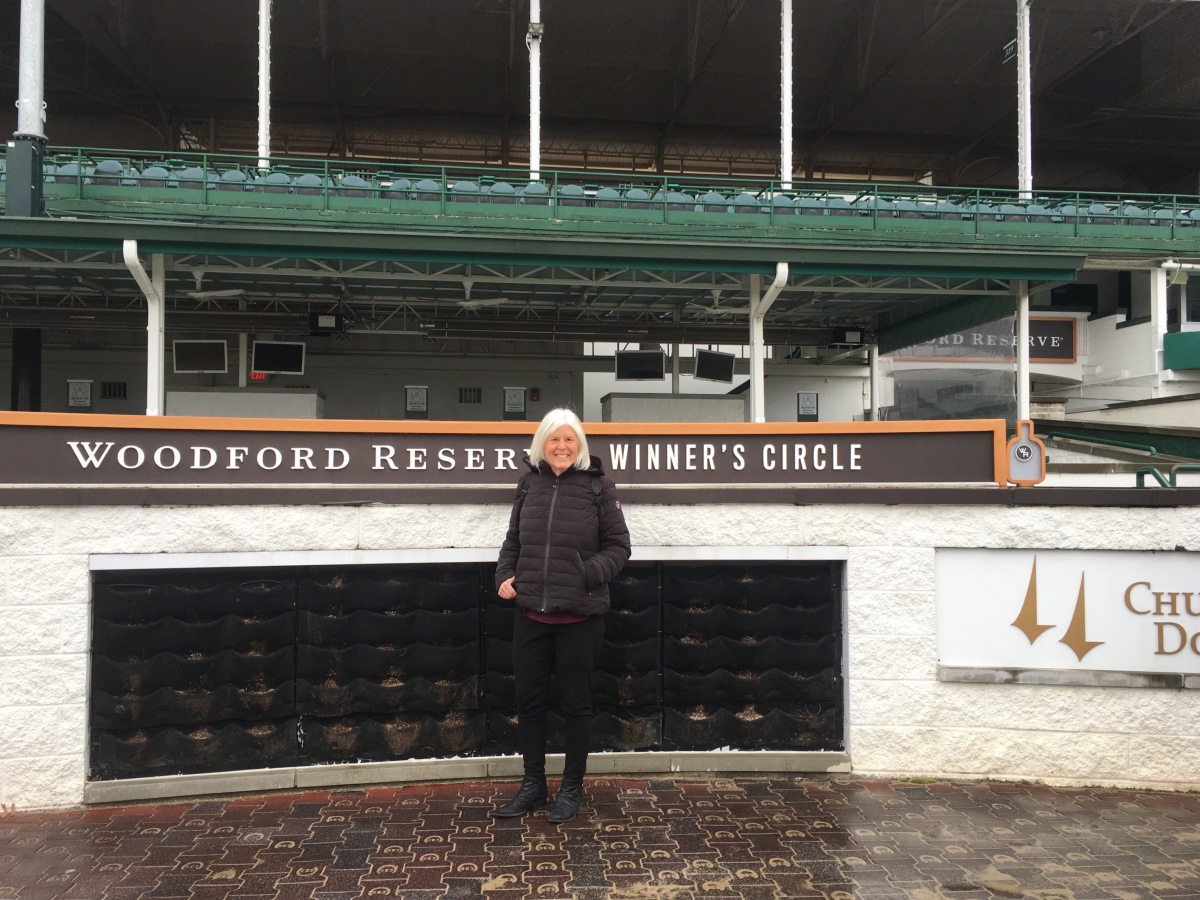 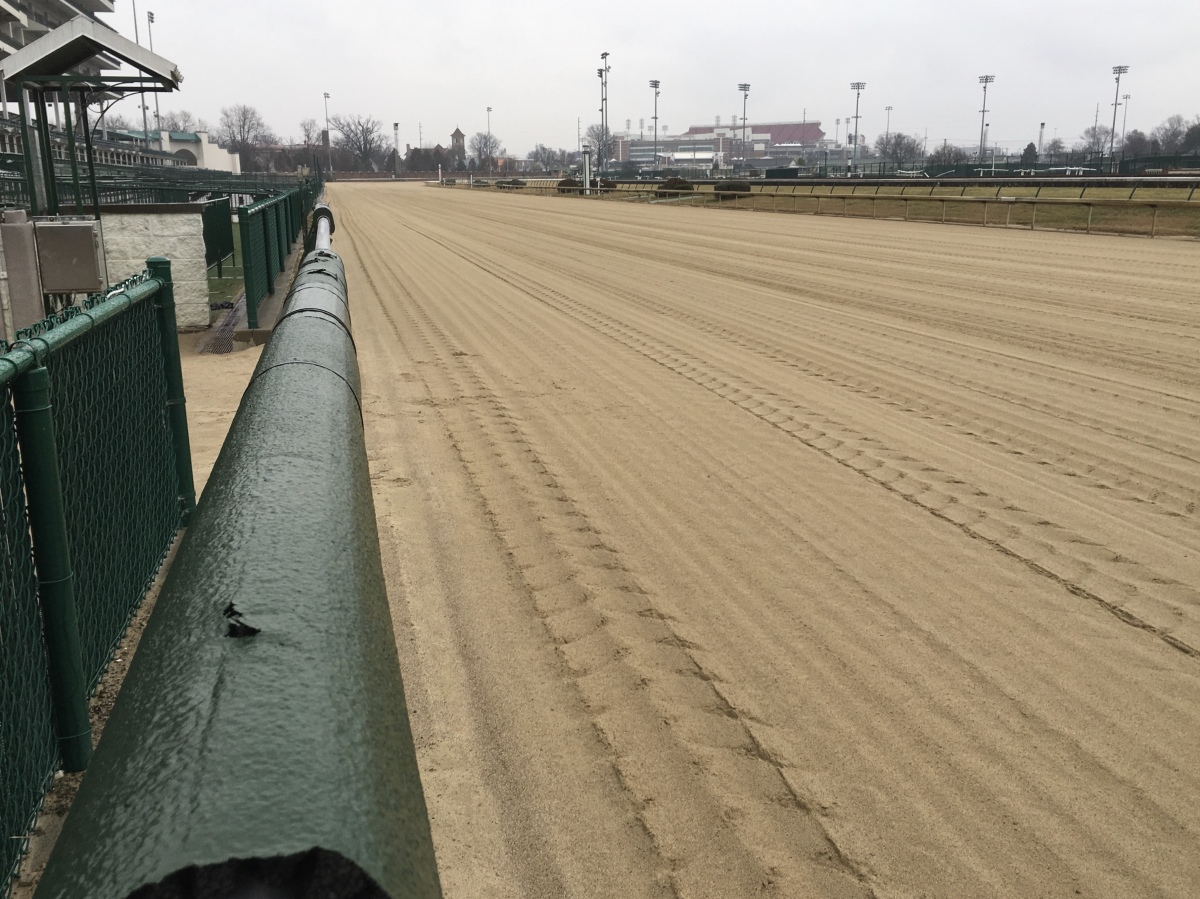 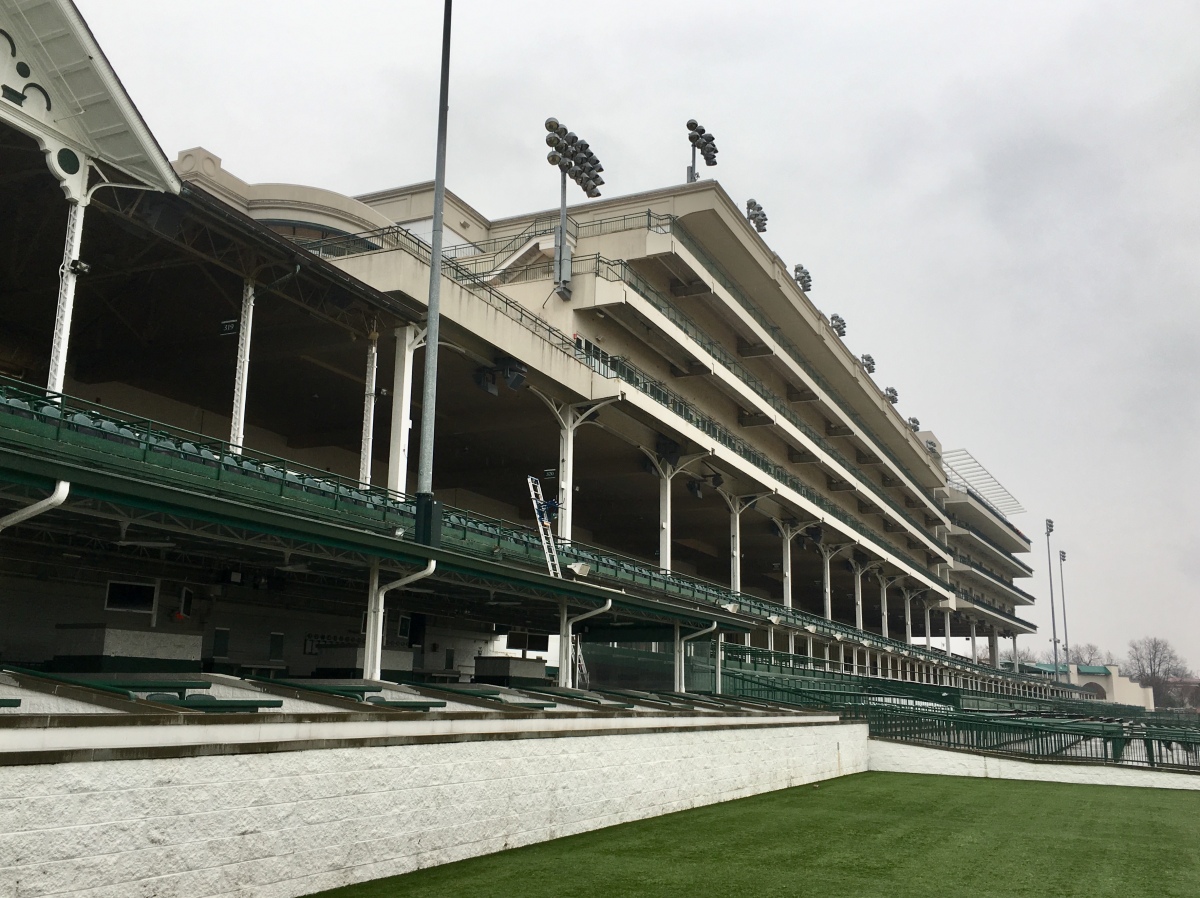 The Derby is the first leg of the American Triple Crown and is followed by the Preakness Stakes, then the Belmont Stakes.  Anywhere from 16-20 horses can participate. All horses must carry 126 lb. (fillies carry 121 lb.).  They must be weighed before and after the race.  In the past some jockeys carried lead to get up to the required weight and then tossed it during the race. 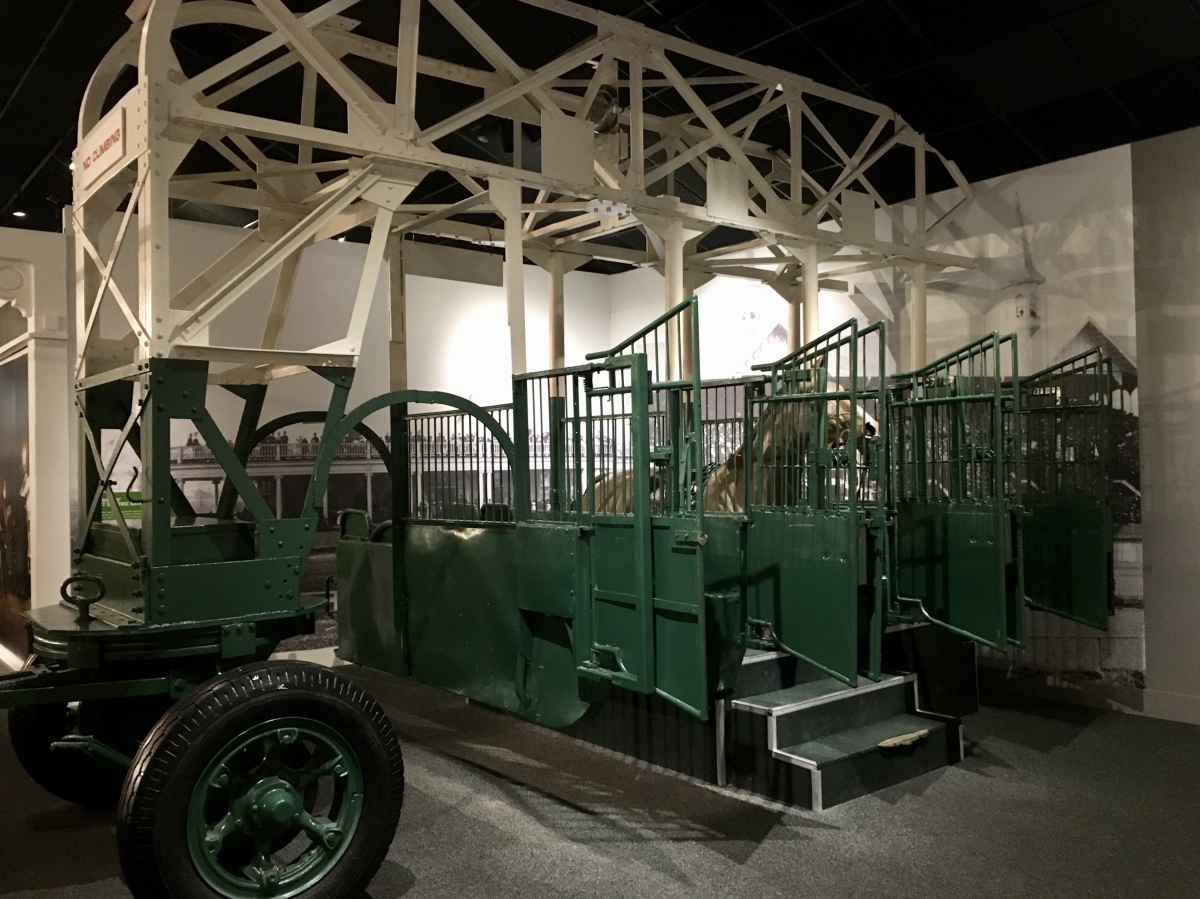 the starting gate for the horses

Churchill Downs has 60,000 seats but no one is turned away.  Usually around 170,000 wander around the stands, mostly in the infield. In the underground tunnel, up to $23 million – all cash – is wagered.  Add concessions and lots of money is circulating. 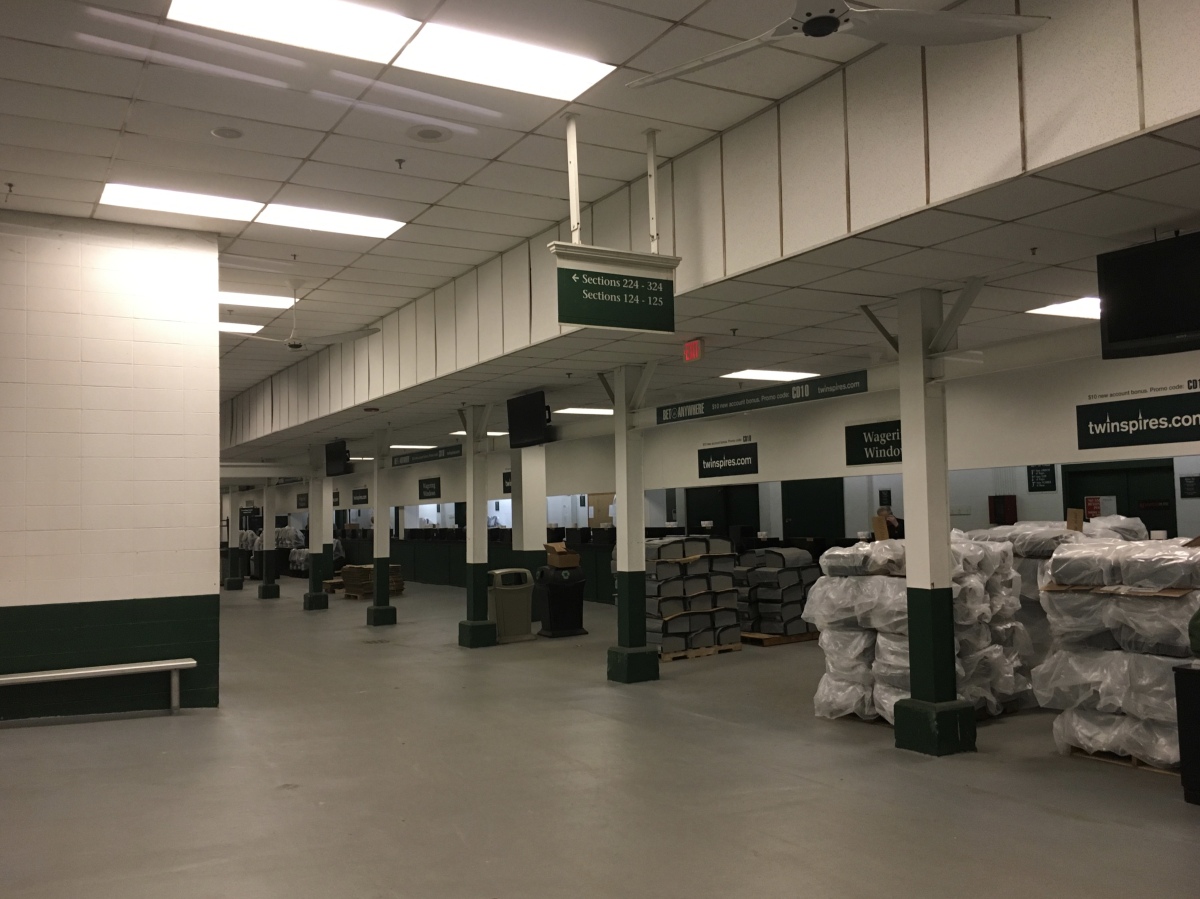 the underground tunnel where wagers are made

I admired a rose-draped statue of Justify, winner of the 2018 Derby. The Derby is often called “The Run for the Roses” because of the blanket of roses draped over the winner. Because it was raining on that May day in 2018, the track was sloppy and difficult. 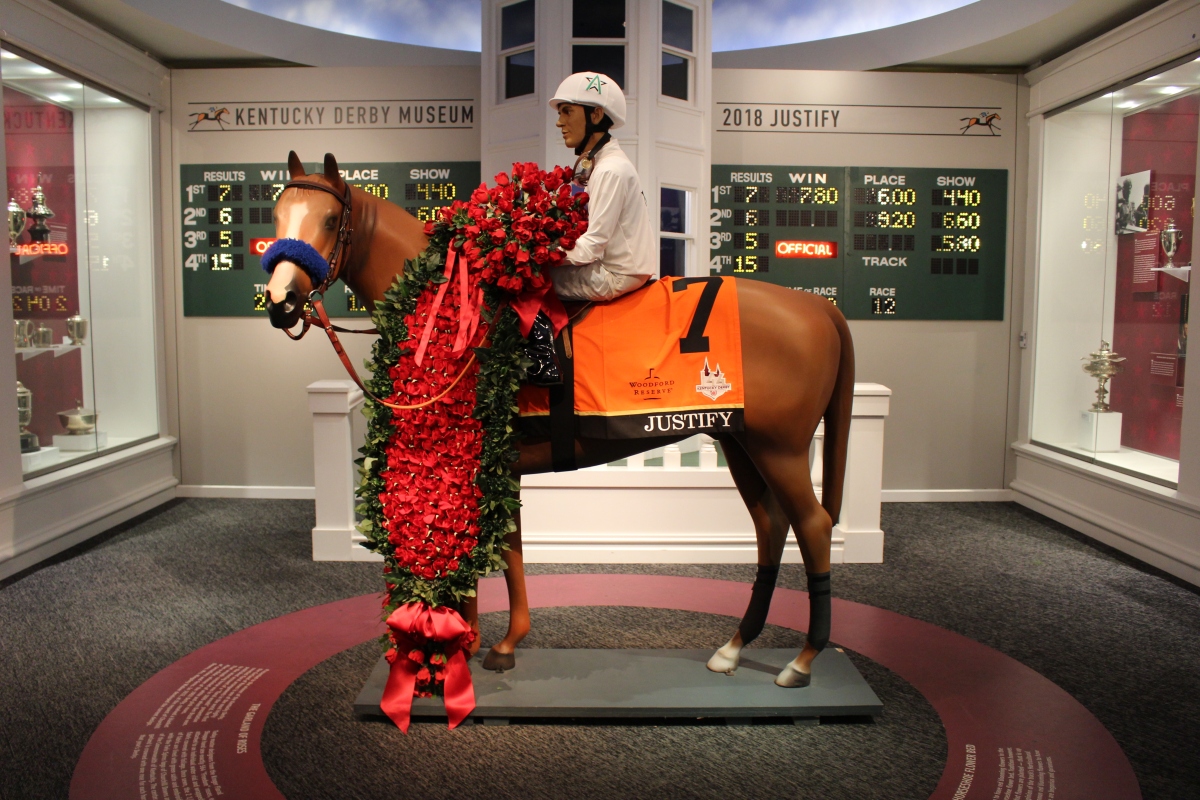 Justify decked out in roses

Back in the warmth of the Museum, I found an exhibit on jockey Bill Shoemaker, one of the biggest stars of Thoroughbred racing. He won his first race in 1949, his first Kentucky Derby in 1955, and rode his final race in 1990.  He retired as the most winning jockey of all time (a record since broken by two others) and became a trainer.  Despite suffering a life changing accident in 1991, in which he lost control of his car and went over an embankment, severing his spinal cord, he continued to train horses and be part of the industry he loved.  He passed away in 2003. 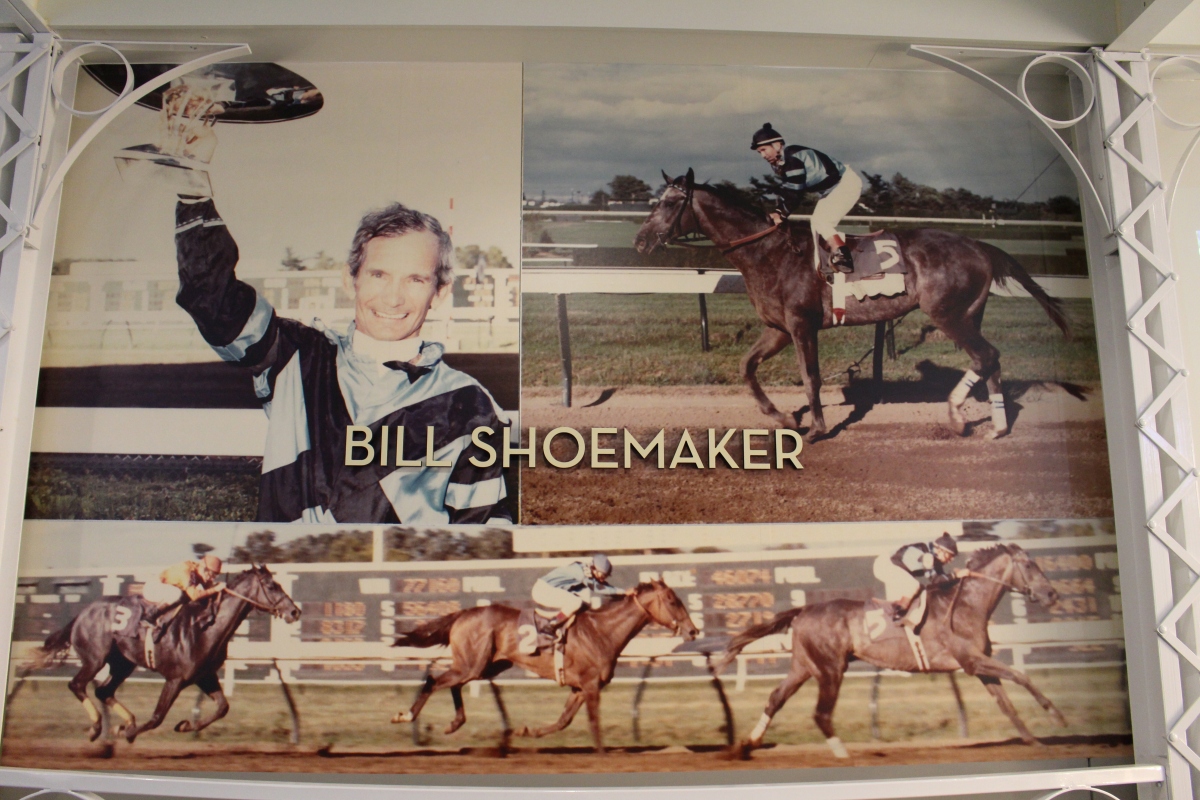 A poster featured the Louisville Jockey Club, which oversees breeding and racing of Thoroughbred race horses.  Each winner of the Derby has a plaque bearing its name at Churchill Downs.  The Racing Form is a tabloid newspaper founded in 1894 in Chicago, Illinois; it publishes the past performances of race horses as a statistical service for horse-racing bettors in North America. 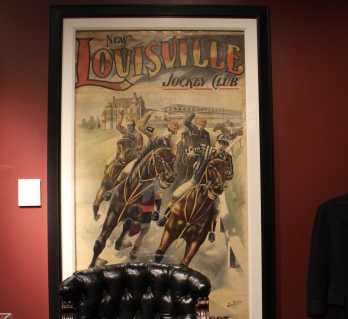 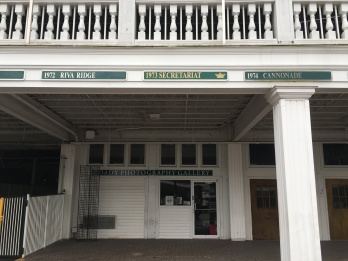 plaques to Derby winners including Secretariat 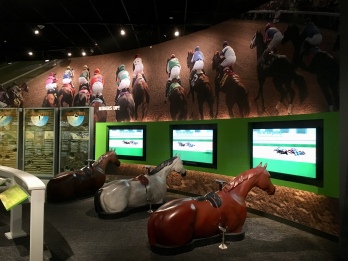 display in the museum 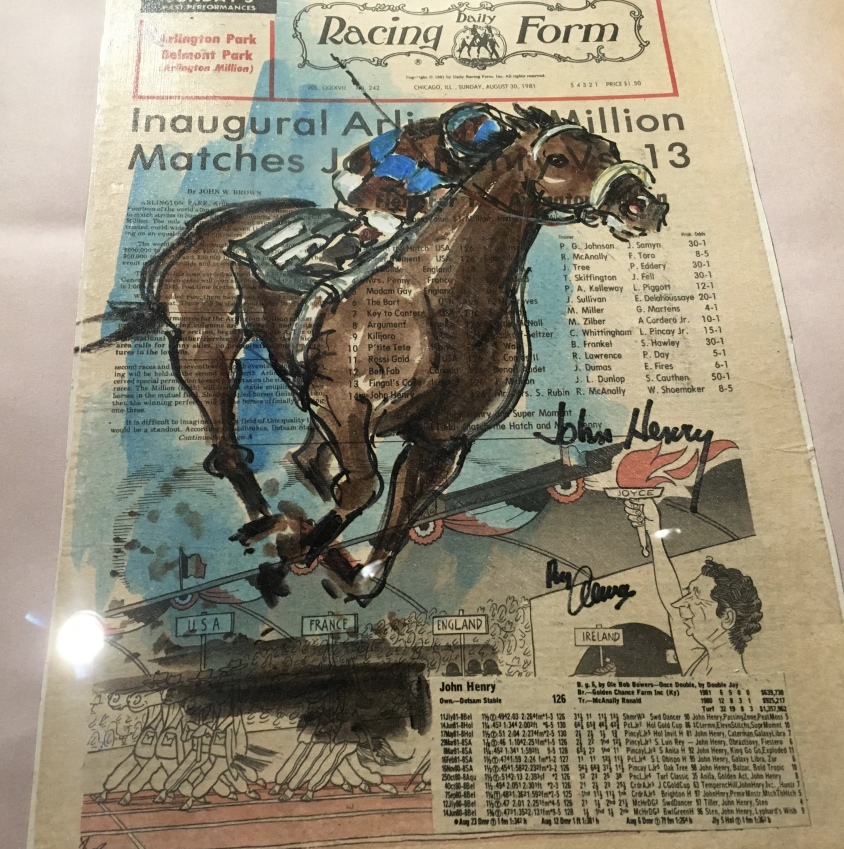 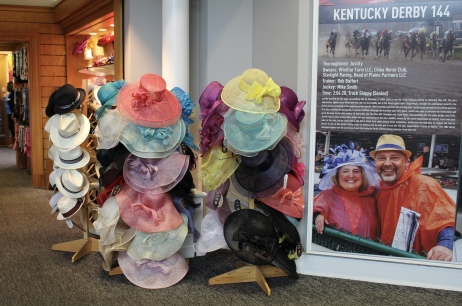 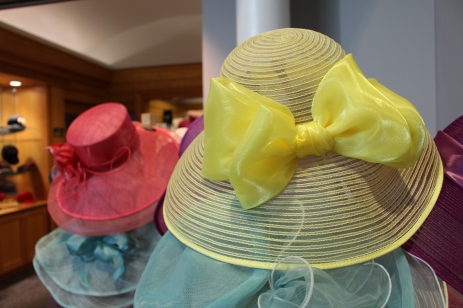 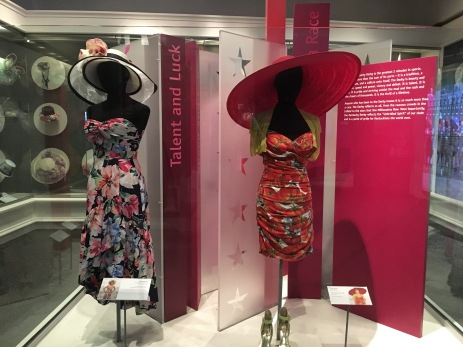 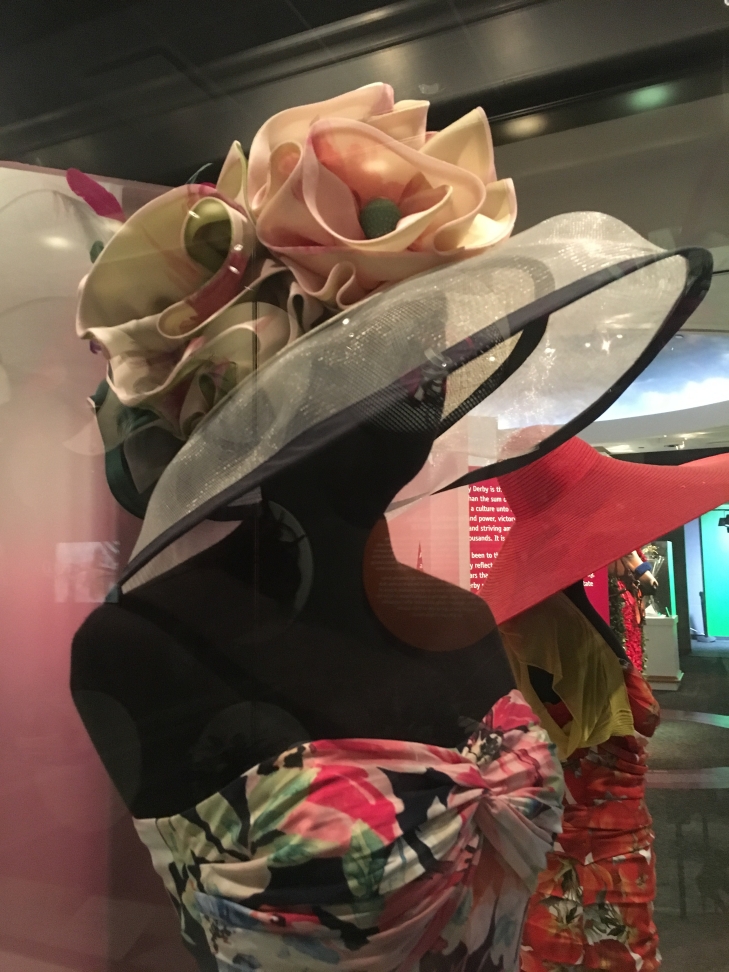 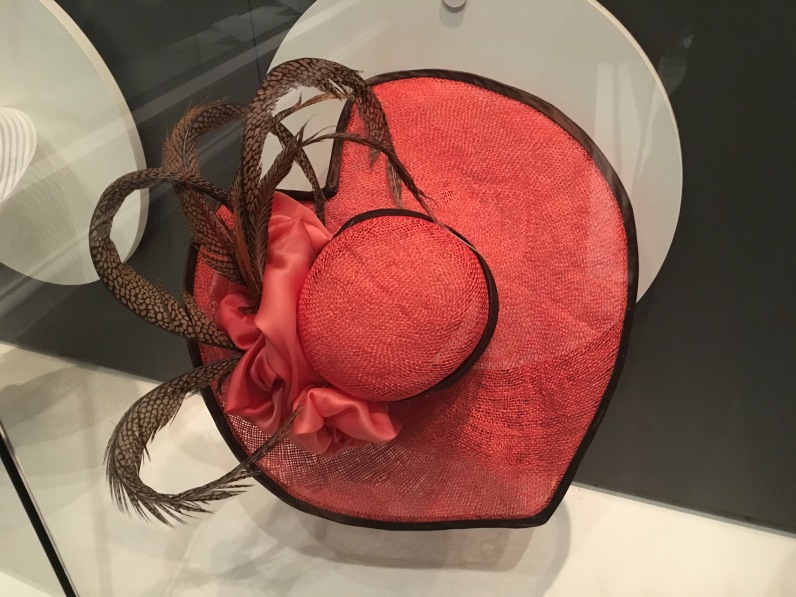 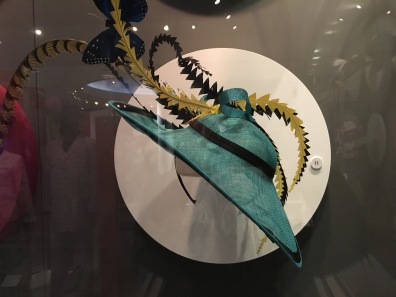 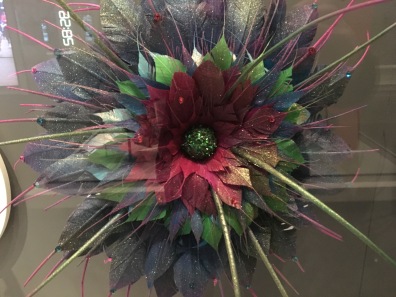 My favorite thing about the museum was watching the 360° film about Derby Day, which enthralled me so much, I decided I must attend the spectacle one of these days. 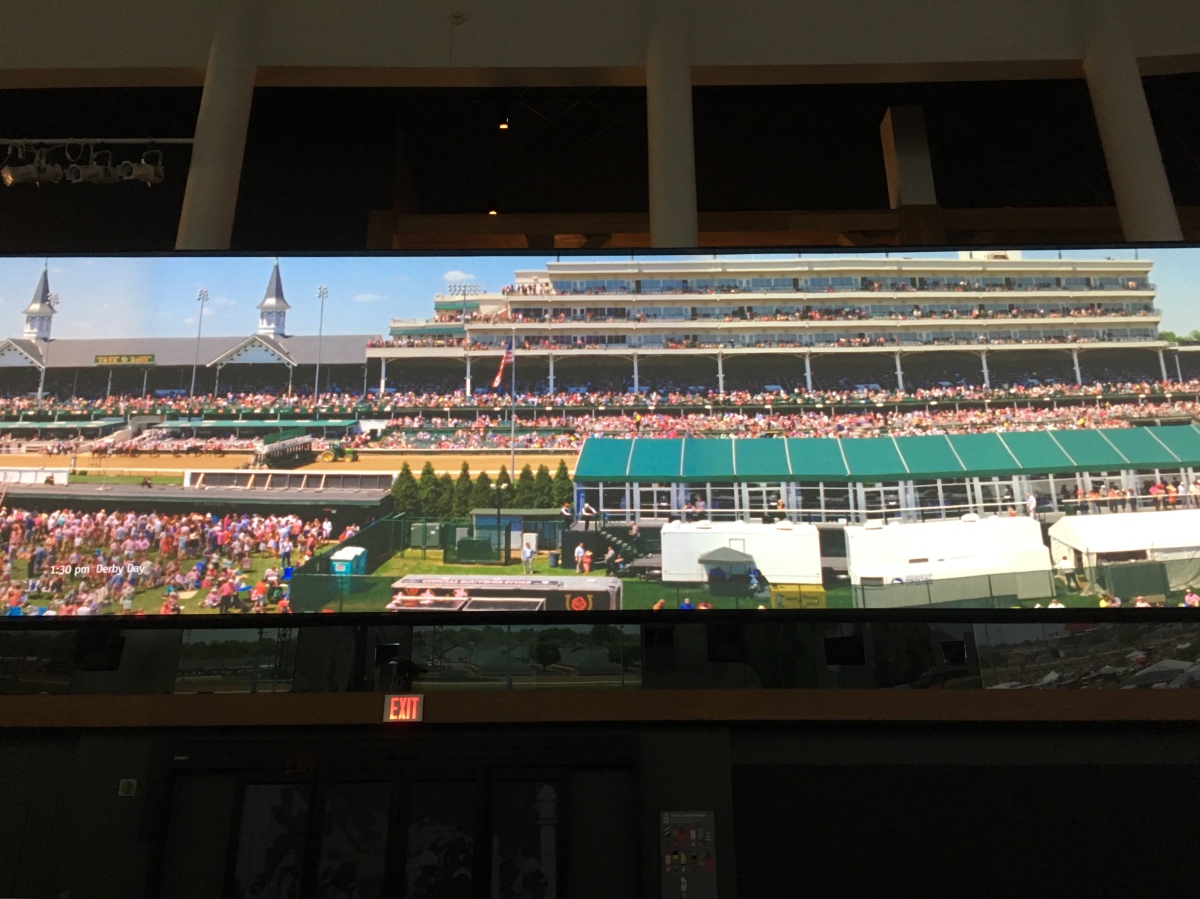 The Kentucky Derby reflects the unbridled optimism of horse owners and the public, a sort of encapsulation of the American Dream. Millions are spent on breeding and training horses for what many consider “the most exciting two minutes in sports.” If that isn’t an example of both the folly and power of optimism, I don’t know what is.

One of my intentions was to write about the theme of “Optimism – Power or folly.”

Include the link in the comments below by Tuesday, August 20 at 1:00 p.m. EST.  When I write my post in response to this challenge on Wednesday, August 21, I’ll include your links in that post.