After leaving the Pinckney site, I drove through Isle of Palms and then to Sullivan’s Island, where I cruised past the tiny downtown area and Stella Maris Roman Catholic Church. Edgar Allan Poe was inspired by Sullivan’s Island’s lonely windswept landscape to write The Gold Bug and other works.

I dropped into Fort Moultrie, part of Fort Sumter and Fort Moultrie National Historical Park.  I watched a hokey film there that must have been made 40 years ago!  It was long and rather ridiculous.

Fort Moultrie is the only area of the National Park System where the entire 171-year-history of American seacoast defense (1776-1947) can be traced.

Fort Moultrie was part of the first system of fortifications in the United States. Moultrie’s first incarnation, a perimeter of felled palm trees, didn’t even have a name when it was unsuccessfully attacked by the British in the summer of 1776, the first victory of the colonists in the Revolution.  Redcoat cannonballs bounced off the flexible trunks, from which South Carolina’s nickname, “The Palmetto State,” comes.

During the British occupation in 1780-1782, the Fort was called Fort Arbuthnot. The Fort was renamed for the U.S. patriot Commander in the Battle of Sullivan’s Island, General William Moultrie.

Atop the decayed original Fort Moultrie, the Army completed a new fort in 1798; the Army also built 19 other forts along the Atlantic coast. After years of neglect, the Antigua-Charleston hurricane destroyed Fort Moultrie in 1804.

In 1809, a brick fort was built. Young Lt. William Tecumseh Sherman was stationed here in the 1830s, well before the Civil War. The Great Chief Osceola, along with his fellow Seminoles, was detained here after his capture in 1837.  The Chief died at the Fort in 1838 of malaria.

The main design didn’t change over the next five decades. By the time of the Civil War, Fort Moultrie, Fort Sumter, Fort Johnson, and Castle Pinckney surrounded and defended Charleston.

South Carolina seceded from the Union on December 20, 1860 after the first election of President Abraham Lincoln. A Federal garrison was sent to Fort Moultrie. On December 26, 1860, Union Major Robert Anderson moved the garrison to Fort Sumter because Fort Moultrie was thought too vulnerable from the landward side.  On February 8, 1861, South Carolina joined five other seceded deep southern states to form the Confederate States of America. In April, 1861, Confederate troops shelled Fort Sumter and the American Civil War began.

Moultrie’s main Civil War role was as a target for Union shot during the long siege of Charleston.  It was pounded so hard that a wall fell below a sand hill.

A full military upgrade happened in the late 1800s, extending over most of Sullivan’s Island.

The U.S. Army modernized Fort Moultrie in the 1870s with new weapons and deep concrete bunkers. In 1898, the Spanish-American War broke out with Fort Moultrie’s smaller rapid-fire batteries still years from completion. 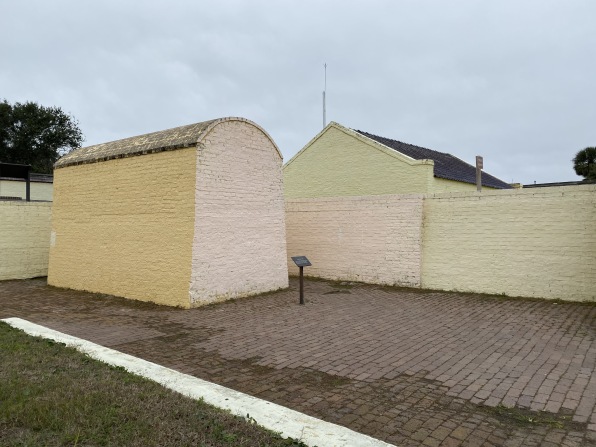 After the U.S. entered World War I, four 6″ guns were removed for service on field carriages on the Western Front in 1917 and were never returned to the fort. 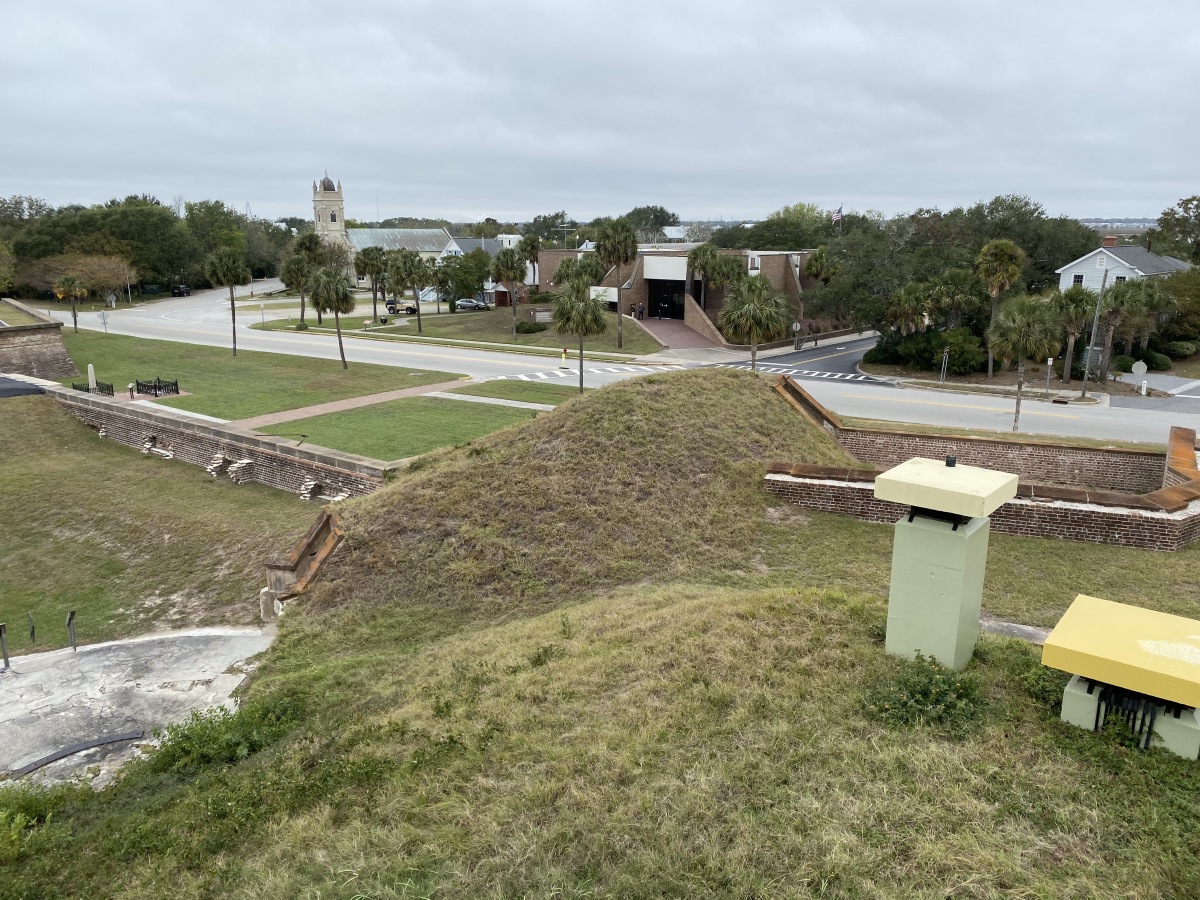 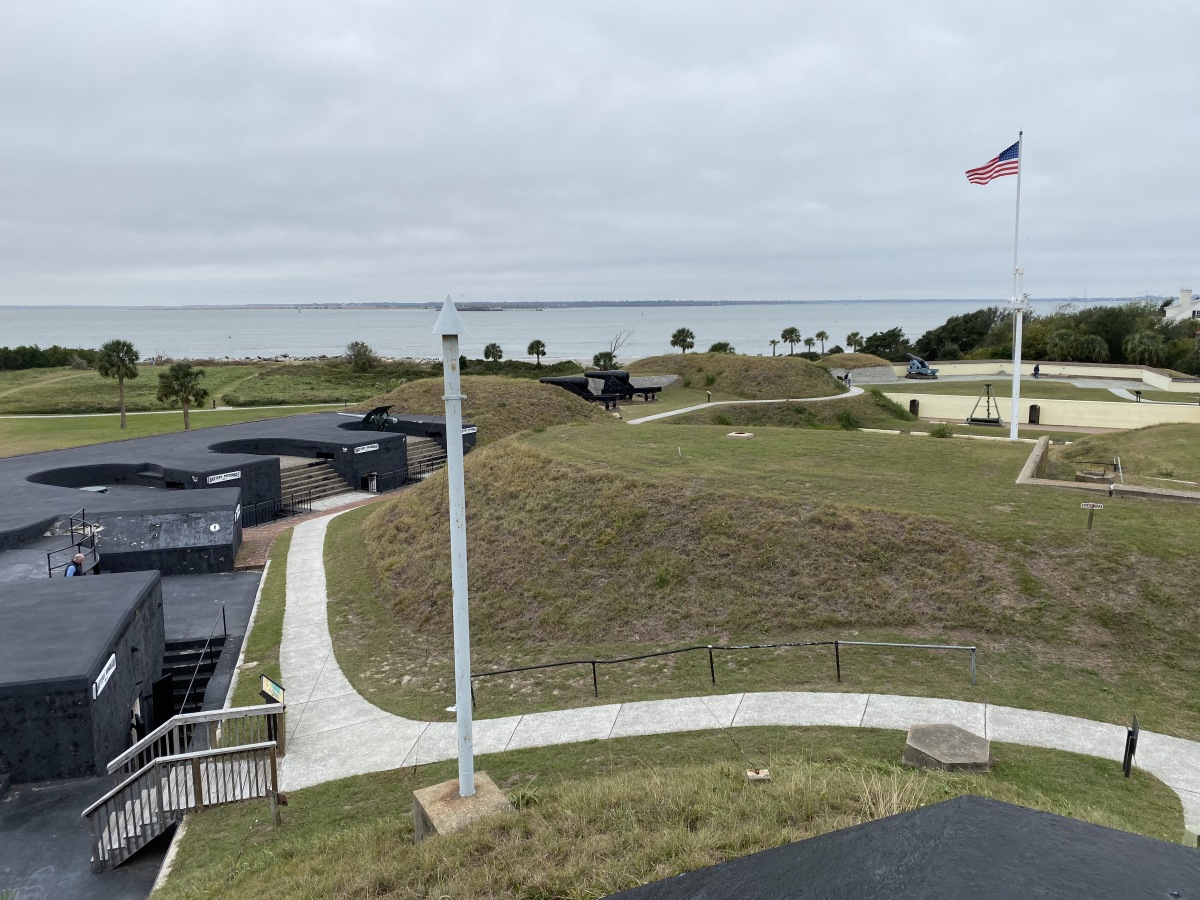 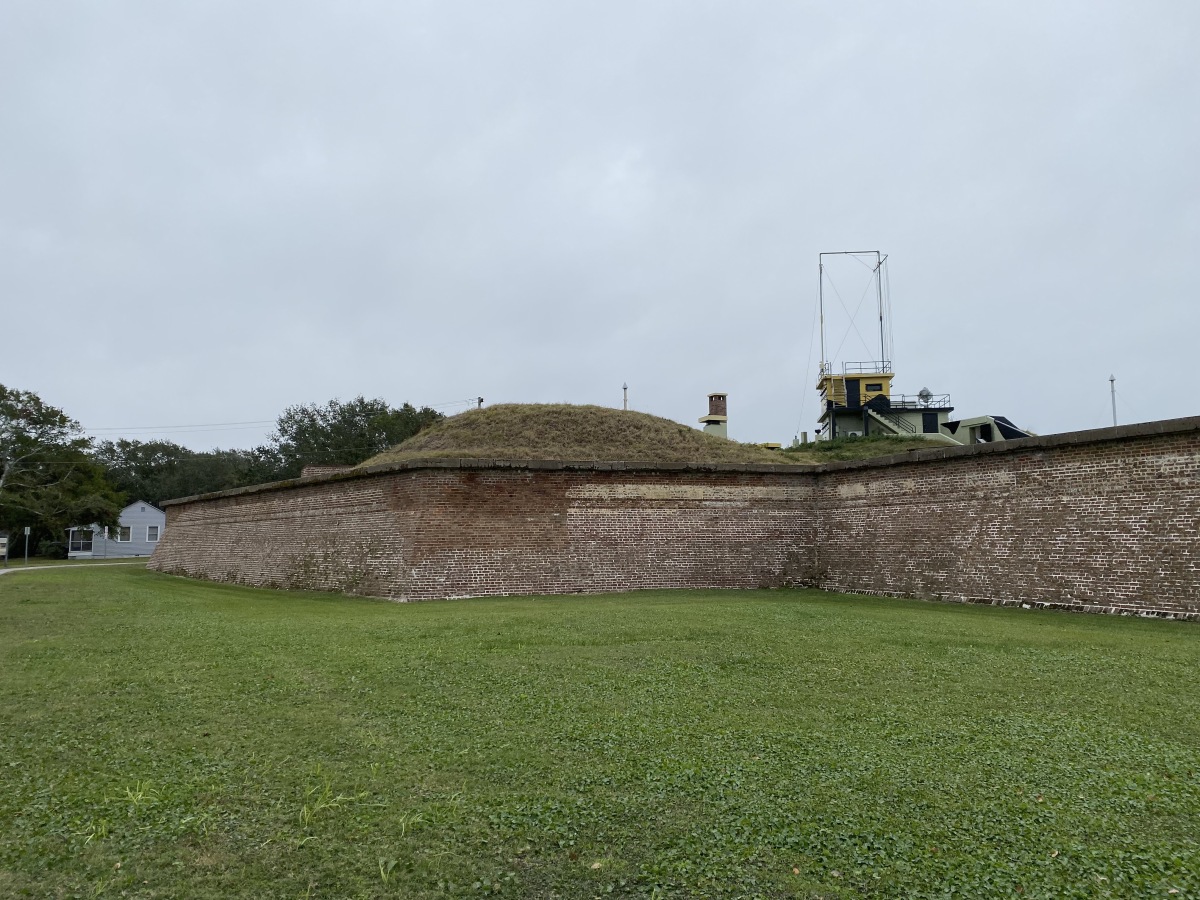 With the outbreak of World War II in 1939, and the fall of France in 1940, there was an upgrade of coastal fortifications.

On August 15, 1947, the Army lowered Fort Moultrie’s flag for the last time, ending 171 years of service. Due to changes in military technology, including submarines and nuclear weapons, seacoast defense of the U.S. ceased to be a viable strategy.

After walking around the Fort, I went into the Visitor’s Center to see the displays.  Many of them were about Sullivan’s Island and the slave trade.

The forced exodus of West Africans to the New World often ended on Sullivan’s Island near Charleston, the entry point for nearly half the captive Africans shipped to North America. Beyond military defense, the island had quarantine stations to protect the colony from deadly diseases.  Between 1707 and 1799, when arriving ships carried infectious diseases, their free or enslaved passengers were quarantined either aboard ship or in island “pest houses.” This painful history makes Sullivan’s Island a gateway through which many African Americans can trace their entry into America.

The mixing of African and European cultures gave rise to the Gullah/Geechee culture that still exists today along the Atlantic coast of North Carolina, South Carolina, Georgia, and Florida. Gullah/Geechee people have retained more of their African traditions of language, food, religion, crafts and folklore than any other African American community. 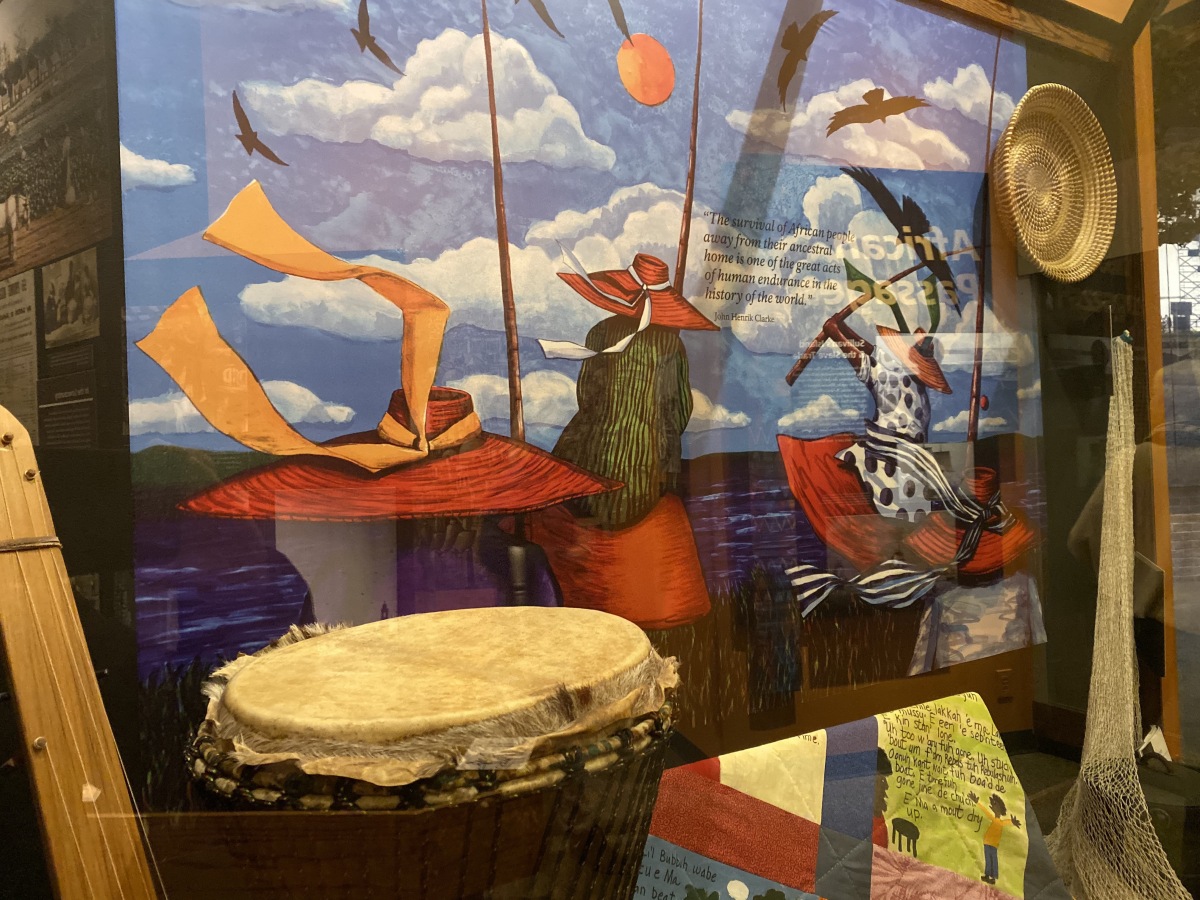 The threat of cruel punishment or being sold from one’s family forever didn’t stop an enslaved black majority from resisting.  In their resolve, they ran away, went on work slowdowns, destroyed property, or poisoned their owners. They also rebelled like in the Stono Rebellion in 1739 and the failed Denmark Vesey conspiracy in 1822.  In an effort to prevent runaways, Charleston required hired-out slaves to wear badges as proof of their enslavement.

I had read much about the badges and the Denmark Vesey conspiracy in the excellent novel by Sue Monk Kidd, The Invention of Wings.

The Civil War forced an end to slavery, ushering in the period of Reconstruction, during which a newly freed people enjoyed a brief period of near equality.  It would take over a century for the promises of a social revolution to become a reality for people whose ancestors came to America in chains.

Sadly, they are still fighting for equality today.

From the beginning, Africans were the backbone of Carolina’s economy.  English colonists brought a plantation system perfected on the sugar islands of Barbados. Africans cleared the land for agricultural production.  They made the tar and pitch to keep ships afloat. They stirred the indigo pots, herded the cattle, and fished the waters. But their labor and ancient ingenuity growing rice was prized the most. They skillfully tamed the freshwater swamps to grow a fickle crop that required a balanced flow of water for profitable yields.  The Africans grew the “white gold” that made Carolina rich.

An end to slavery

Slavery in the Low Country

In Charleston, port physicians inspected incoming ships to protect the settlement from contagious diseases.  If a ship was suspected of carrying infection, Africans and white passengers arriving from Europe or other American colonies were quarantined.  They were isolated aboard ship, in homes, or in pest houses.

The first public pest house or “lazaretto” was constructed on Sullivan’s Island around 1707.  During the next 80 years four public pest houses were built between Fort Moultrie and the western end of the island. Following complaints by island residents, the last pest house was closed and sold in 1796.

In July 1839, 53 enslaved Africans revolted on board La Amistad, leading to a U.S. Supreme Court ruling that set the Africans free. The captives were smuggled to the Americas from Africa after the international slave trade was outlawed. The Africans revolted off the coast of Cuba, and their case for freedom was heard in a New England court. 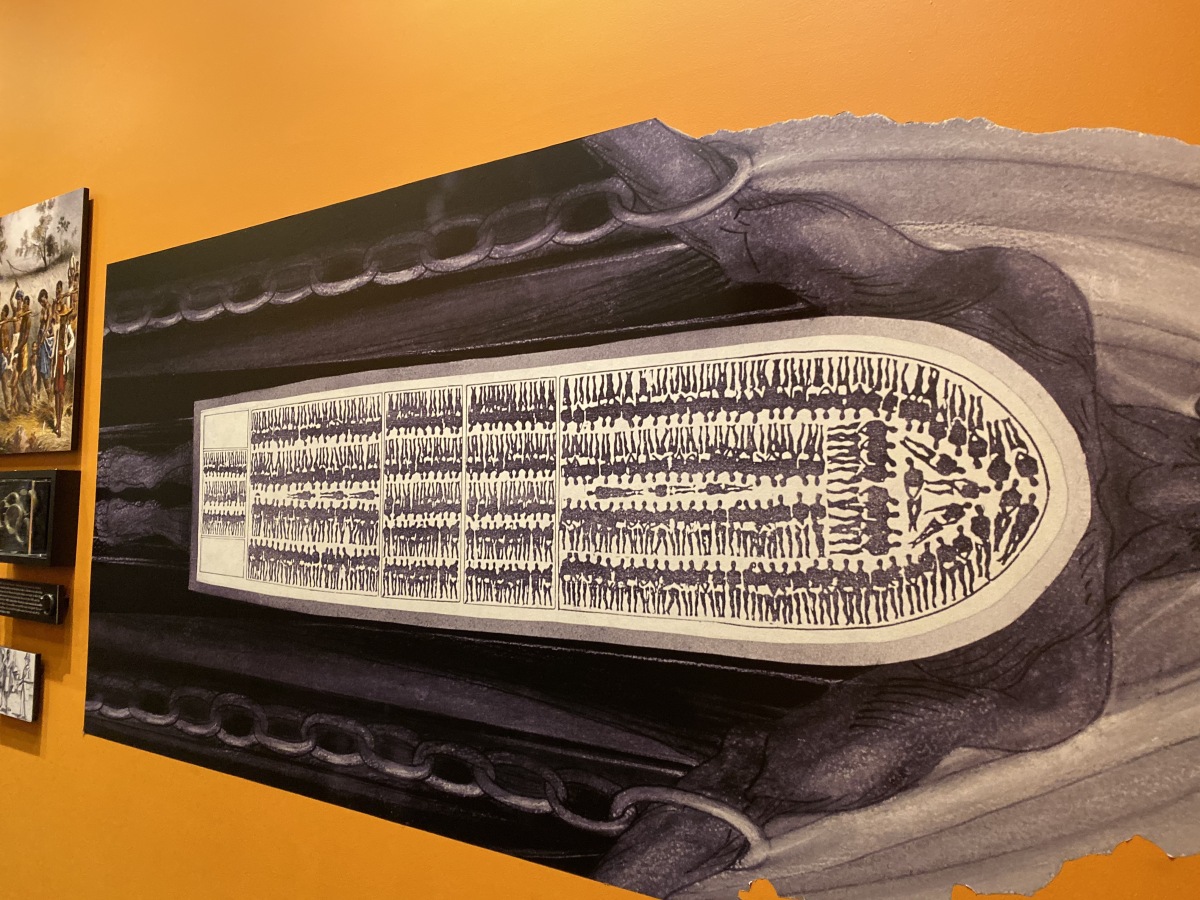 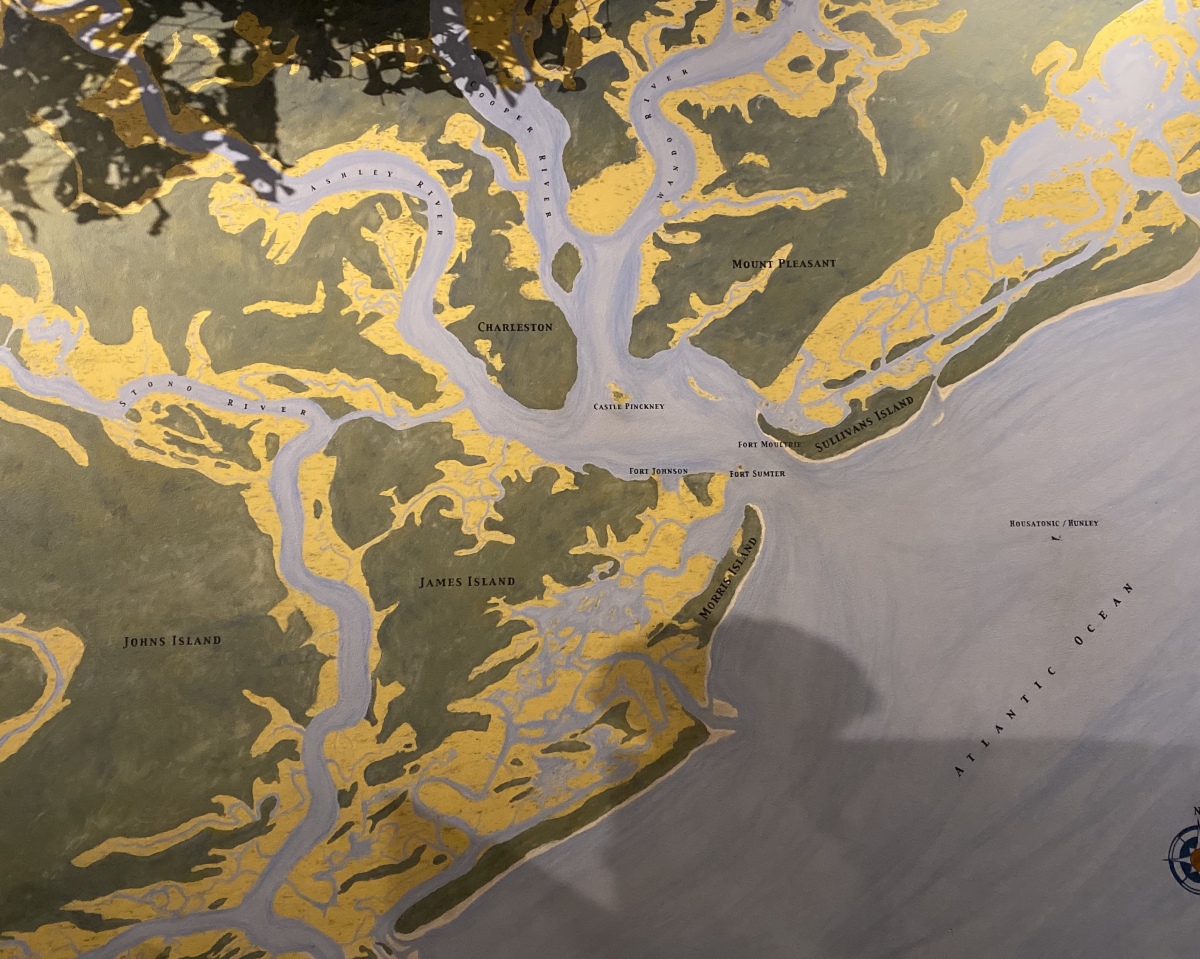 After walking around the Visitor’s Center, I climbed to the observation deck to see a view of the fort from on high. From this deck, the strategic value of Fort Moultrie became clear. Charleston Harbor’s main ship channel — the only deepwater access to the port — passes directly in front of the fort. Ships entering the harbor had to pass close under the fire of Fort Moultrie’s guns. From the time of the American Revolution through World War II, the fort’s position on the south end of Sullivan’s Island was the key to defending Charleston. 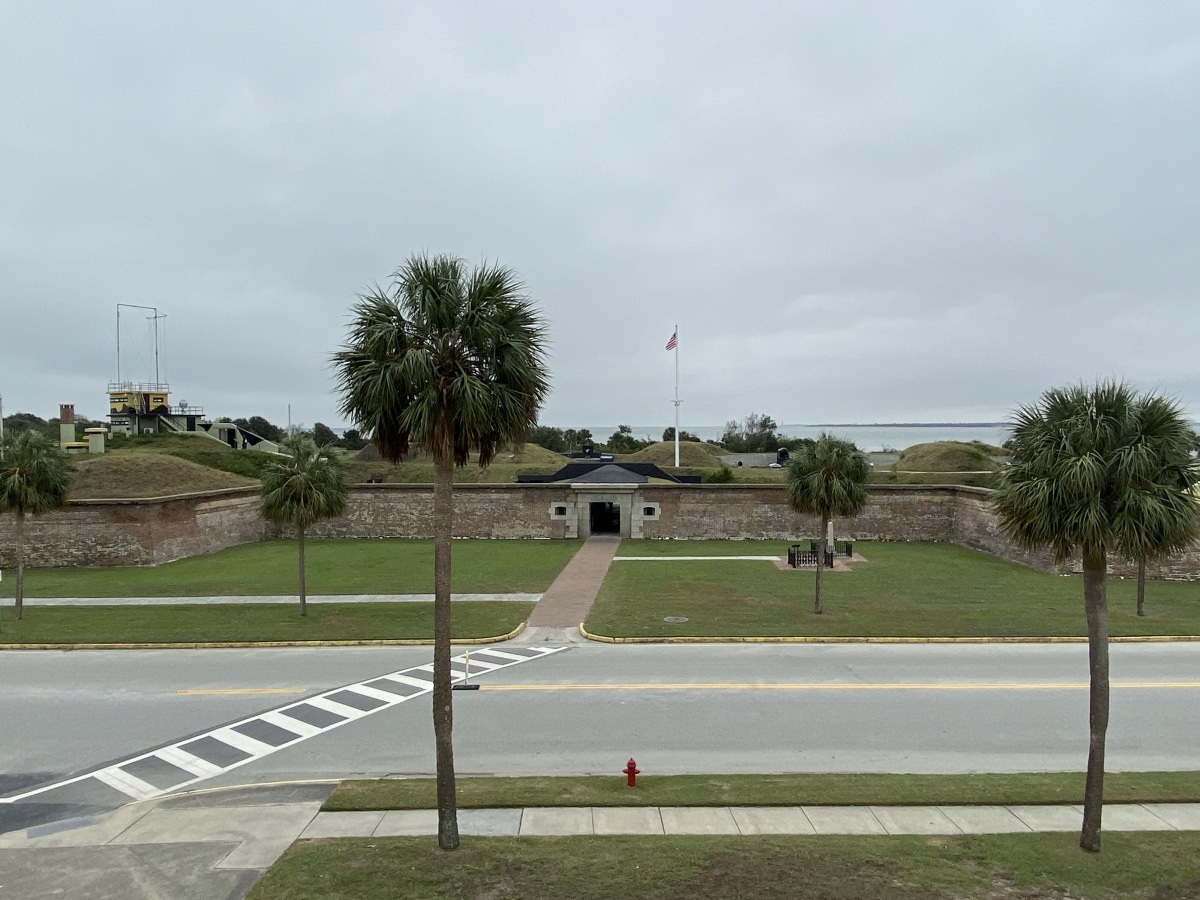 Below is my cancellation stamp for Fort Sumter, the Charles Pinckney National Historic Site, and Fort Moultrie.

By the time I left Fort Moultrie, it was raining.  I went back to the Airbnb and Sarah and I ate lunch there (chicken poblano soup and various crackers and cheeses/hummus/salami/chicken salad).  We watched a bit of Falling Inn Love (when city girl Gabriela wins a rustic New Zealand Inn in a contest and teams up with contractor Jake to fix and flip it).

Then we drove back to King Street in the pouring rain to go shopping.  We went first to Blue Bicycle Books (used, rare, and local) and browsed for a while.  “DEBORAH” was in the window and a book by Deborah Burns, Saturday’s Child: A Daughter’s Memoir, for an upcoming book talk.  When I stopped to take a picture of the window design, a guy walked by and said “Are you Deborah?”  That was random!

We went to H&M, where I bought three turtlenecks (black, purple and pink) and Sarah bought a bunch of stuff.  Sarah also bought earrings at Anthropologie and two pairs of very expensive jeans (with buttons) at Madewell.  We popped in and out of lots of small boutiques.

Tiring of the rain, we drove back to our Airbnb and watched the rest of the movie and had a glass of wine.

Then we drove back to Charleston to go Magnolias, with a “delightful take on Southern classics.” It was cozy, noisy and boisterous inside but the food was mediocre. I had an Uptown Fizz (Aperol, Moscato Rosé, & fresh cucumber).  We had an asparagus salad with arugula that we shared.  I had Buttermilk Fried Chicken Breast with mashed potatoes, collard greens (with too much vinegar), creamed corn, a cracked pepper biscuit, and herb gravy.  The chicken was dry and everything else was tasteless. 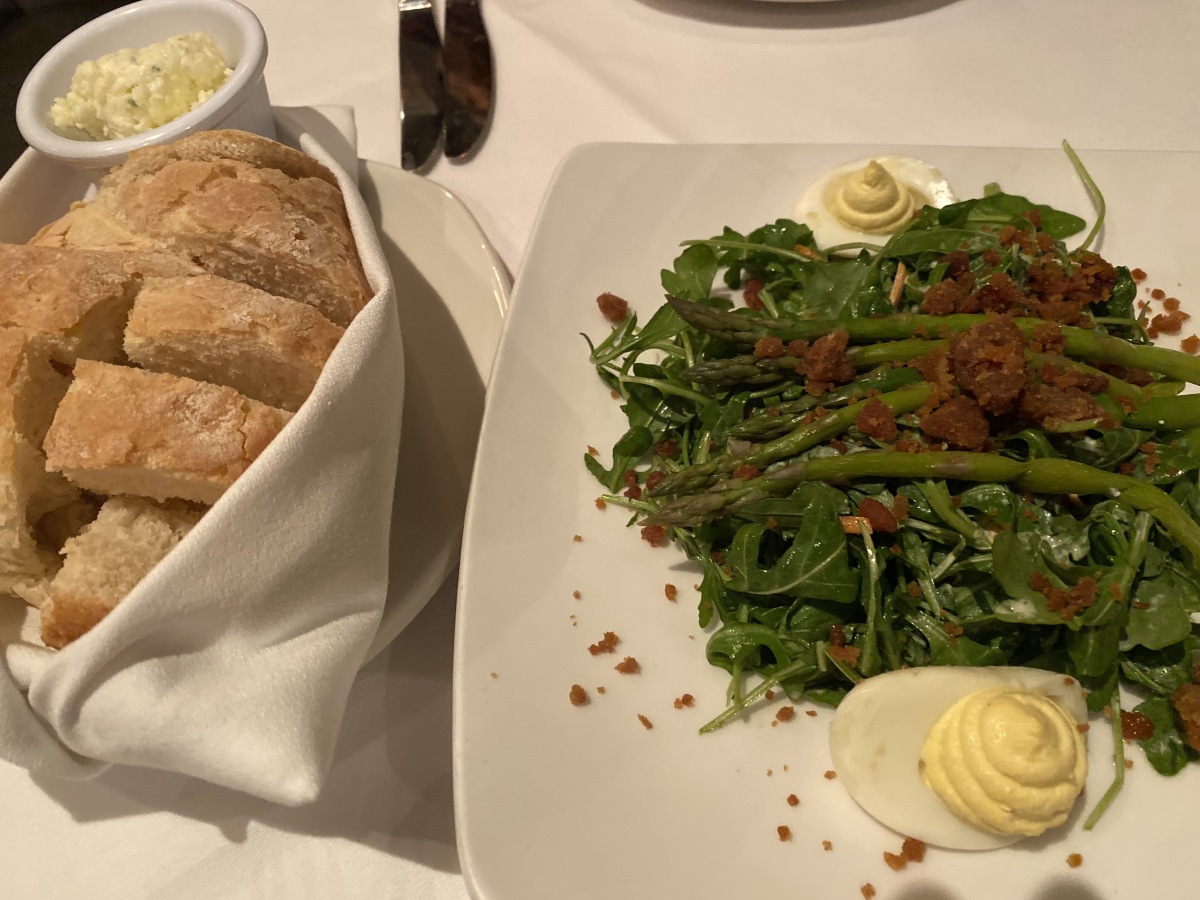 After dinner, we got cozy in our Airbnb and watched several episodes of This Is Us.