I wrote one post about the hike we took to Owachomo Bridge: the owachomo bridge trail at natural bridges national monument. This post features the other two natural bridges: Sipapu and Kachina.

The rock here is sandstone first formed by windblown sand.  The deep and curvaceous White and Armstrong Canyons and their three bridges were formed by water’s relentless action against the sandstone. Sipapu and Kachina straddle streams with long, winding curves.  Owachomo, straddling no stream now, apparently was cut by two streams.

When a stream forms a looping meander and almost circles back on itself, it can carve the thin rock wall in which a natural bridge forms. Flood waters erode both sides of the thin wall, and even at low water levels, percolation weakens the wall.

Over time, the river breaks through and takes the shorter course under the new bridge, abandoning the old meander. The river continues to wear down the rock, enlarging the hole by cutting itself deeper. A natural bridge is temporary as blocks fall from its underside, and its surfaces weather, wear and weaken.

Sipapu means “place of emergence,” the entryway by which the Hopi believe their ancestors came into the world. Sipapu is 220 feet high, 31 feet wide, and has a span of 268 feet.  It is 53 feet thick. Mature, highest and greatest in span, it endures very little stream erosion because its abutments stand far from the stream.

Ancestors of modern Puebloan people moved onto the mesa tops to dry farm in 700 CE and later left as the natural environment changed.  Farmers returned about 300 years later, building homes both on the mesa tops and in alcoves in the cliffs. South facing caves provided passive solar heating and cooling. The farmers often chose sites near seep springs where water could be found.  From an overlook into White Canyon, we saw the Horse Collar Ruin built in one such alcove. 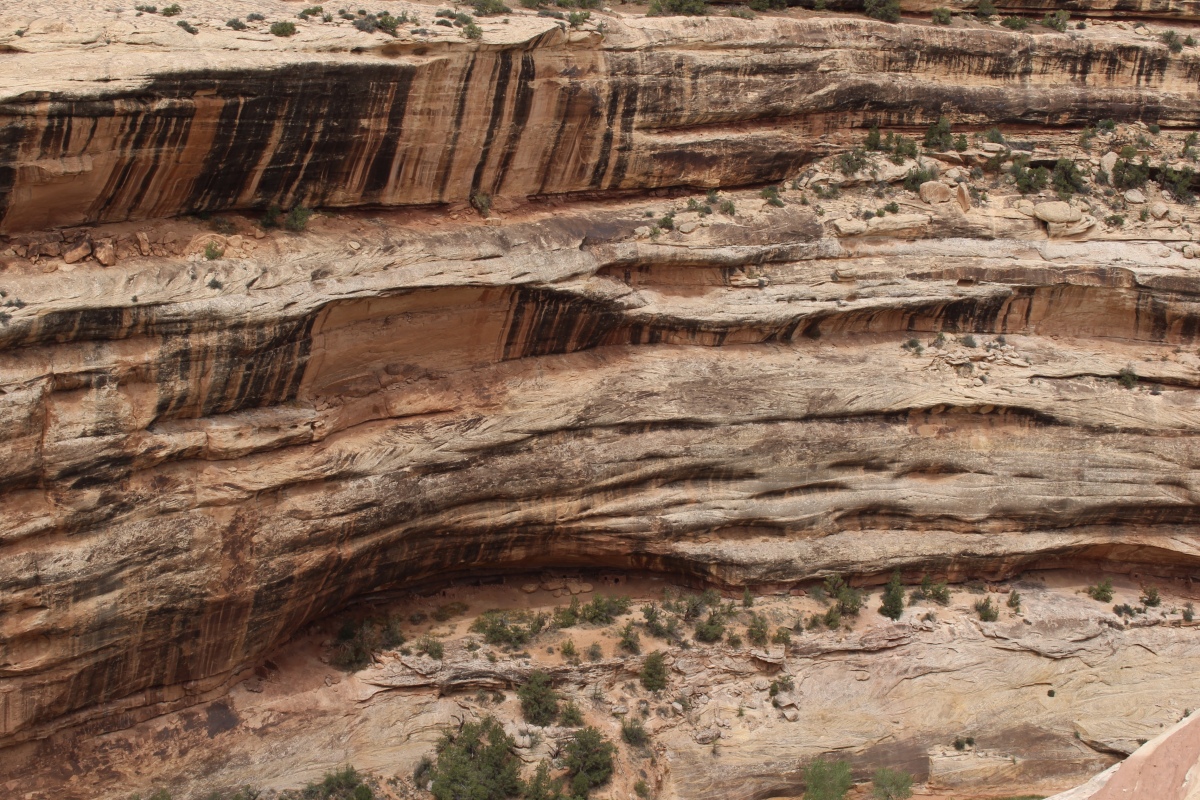 We couldn’t get a great view of Kachina Bridge without hiking down to it.  As we didn’t have time to do two hikes, we only were able to admire it from above.  Kachina is named for rock art symbols that resemble symbols commonly used on kachina dolls.

Kachina Bridge, the youngest bridge, is big and bulky.  White Canyon floodwaters still work on enlarging its span.  Kachina is 210 feet high, 44 feet wide, and has a 204 foot span. It is the thickest bridge at 93 feet.

Owachchomo, the oldest bridge, is no longer eroded by streams, but frost action and seeping moisture continue to continue to erode it.  The bridge may now have a fatal crack, or it may stand for centuries. Owachomo is 106 feet high, 27 feet wide, and has a span of 180 feet. It is only 9 feet thick, much thinner than the other two.

Information above came from various brochures created by the National Park Service.

Here is a companion piece to this post that discusses the difference between arches and bridges: arches in the four corners.

I challenge you to post no more than 20 photos and to write less than 500-800 words about any travel-related photography intention you set for yourself. Include the link in the comments below by Wednesday, January 30 at 1:00 p.m. EST.  When I write my post in response to this challenge on Thursday, January 31, I’ll include your links in that post.

This will be an ongoing invitation, every first and third (& 5th, if there is one) Thursday of each month. Feel free to jump in at any time. 🙂

Thanks to all of you who shared posts on the “photography” invitation. 🙂