In Indiana, I:  Drove amidst silos, barns, cows and farmland and visited the Lincoln Boyhood National Memorial and the George Rogers Clark National Historical Park. 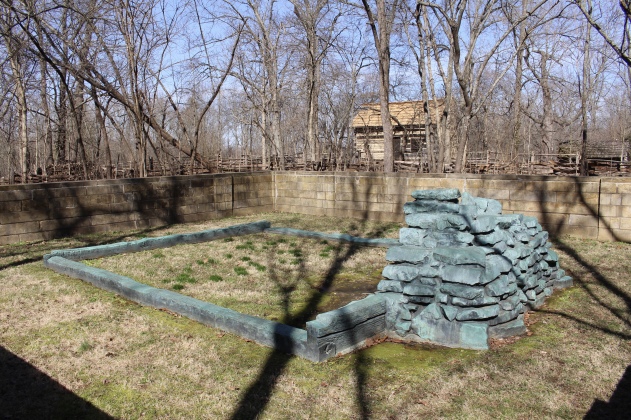 In Illinois, I:  Visited my sister at her new home in Murphysboro and explored local eateries in Carbondale.  Drove to the Garden of the Gods in the Shawnee National Forest on a springlike day, and took a walk amidst whimsically-shaped rocks.  Felt inspired by my sister’s artwork and her various collections, including artistic cigarette cards and early editions of classic books. Got caught up watching Michael Cohen’s testimony before the House Oversight and Reform Committee.  Got hooked on the TV series Happy Valley. Drove in icy rain from Murphysboro to Louisville, where I had to keep getting out of the car and scraping ice off the windshield. 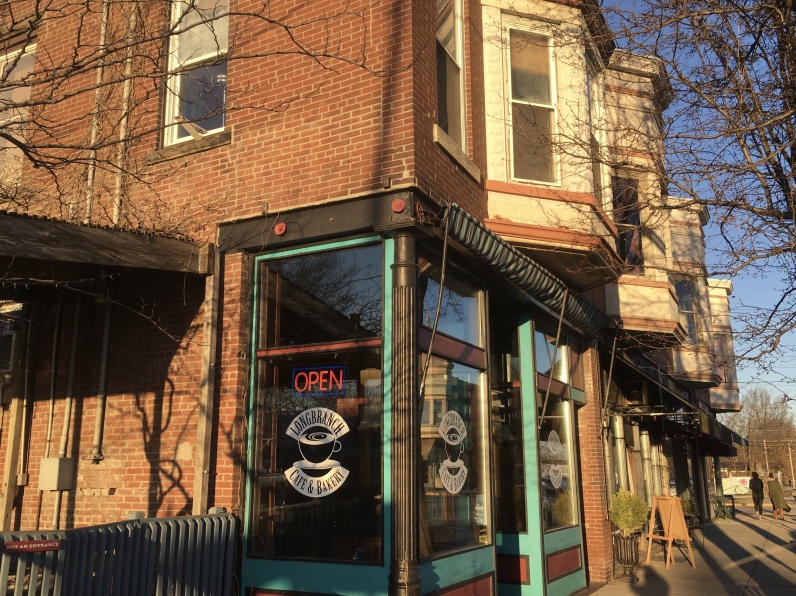 Garden of the Gods in Illinois

In Kentucky, I: Took a tour of Churchill Downs Racetrack and felt inspired to attend the Kentucky Derby sometime in the future.  Learned about bourbon and the Lewis and Clark expedition at the Frazier History Museum.  Felt grateful for the controversial boxer’s fight against racism at the Muhammad Ali Center in Louisville. Marveled over stained glass and amazing mosaics at St. Mary’s Cathedral Basilica of the Assumption in Covington. Learned more than I ever wanted to know about the breeding of stallions at Claiborne Farm in Lexington. Tasted bourbon several times, both at the Evan Williams Bourbon Experience in Louisville and again at Town Branch in Lexington. 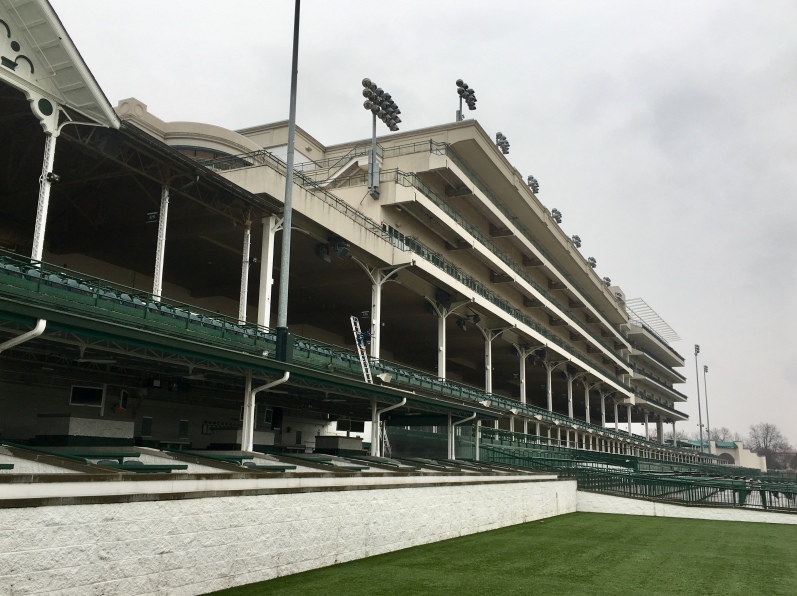 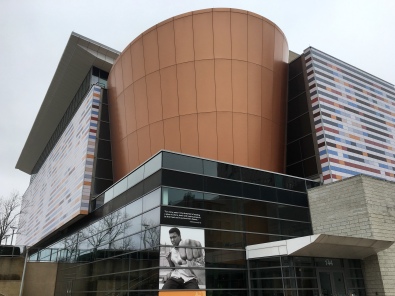 Saint Mary’s Cathedral Basilica of the Assumption in Covington, KY 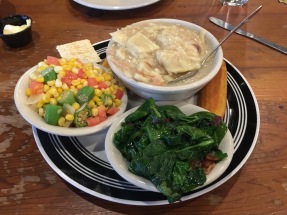 dinner at Ramsey’s in Lexington

In Cincinnati, Ohio, I: Enjoyed mural arts and a blast from the past at Cincinnati’s American Sign Museum.  Learned all about the history of slavery and enslaved people all over the world at the National Underground Railroad Freedom Center. Took a long walk through downtown Cincinnati, along and across the Ohio River on the Roebling Suspension Bridge, to Covington, KY. Tried to stay warm at Krohn Conservatory,  Cincinnati Art Museum, and Findley Market in cold, rainy weather.  Ate decadent foods like Cincinnati chili, biscuits & gravy, and chicken & dumplings too many times to count. 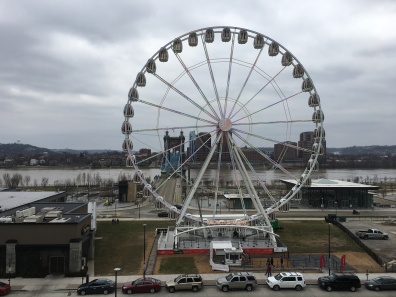 Cincinnati along the Ohio River

Paris 1900 in the Cincinnati Art Museum

I have often imagined American cities and especially the American Midwest as being boring and even a bit backwards.  I have generally thought of these states as drive-through states, states you drive through to get to more interesting places.  Most of the states I visited, with the exception of Illinois, are red states, meaning they’re conservative and voted for Trump in 2016. Before I embarked on the road trip, I read Hillbilly Elegy: A Memoir of a Family and Culture in Crisis by J.D. Vance.  The book is a memoir of growing up in an economically depressed town, Middletown, in Ohio, and gives some insights as to why people are so desperate that they resort to falling for the promises of a charlatan.

My general impressions were that Indiana and southern Illinois would never be places I’d like to live as there was not much of interest going on there.   Louisville, Kentucky seemed down on its luck and a bit derelict, with its main draw being the Kentucky Derby, a one day event in May. It did have the Frazier History Museum and the Muhammad Ali Center, which were fascinating museums. Covington, Kentucky benefited from its proximity to Cincinnati (it’s just across the Ohio River) and was a delight. I loved the rolling hills and horse farms outside of Lexington, but I never developed a taste for bourbon and probably never will.

On the other hand, I found Cincinnati to be a charming town with its ArtWorks Cincinnati program — transforming city walls one at a time. It also was home to a good market, Findlay Market, a creative food scene, some fine museums (most notably the American Sign Museum and the Cincinnati Art Museum) and Krohn Conservatory, and a general feel-good vibe.  I enjoyed it and hope I can return one day in better weather to explore further.

Visiting some of the more depressed areas, especially Louisville, parts of Ohio outside of Cincinnati, and areas in Indiana, I could see why people might vote for someone who promised jobs and economic renewal, despite enacting many policies that actually hurt them, such as limited access to healthcare.  Kentucky was also part of the Confederacy in the Civil War and wanted to keep the institution of slavery.  Mitch McConnell is Kentucky’s senior U.S. Senator and the Senate Majority Leader, a staunch Trump supporter and someone I loathe.  I knew all of this going in, and it may have colored my view of Kentucky.  It wasn’t of my favorite states, and I don’t think I’ll be visiting again except possibly to attend the Kentucky Derby one of these days.

As you can see from the polarsteps map below, my trip turned out to be more of a Midwestern triangle Δ and rectangle than just a Δ. 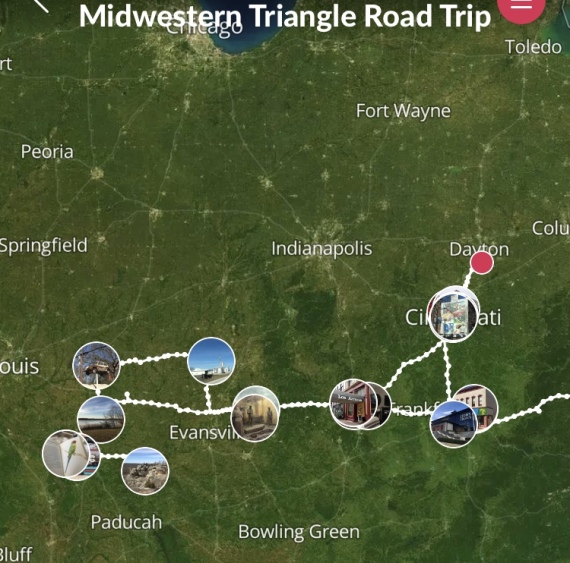 As a follow-up to my trip, I wrote a number of posts based on intentions I set before embarking:

I still have several poems to write: 1) a found poem from any book I read about Cincinnati or Ohio; 2) and two headline poems for Louisville and Lexington.

I was also supposed to do a sketch each day.  I didn’t do one every day, but I did a couple, most very elementary and one simply awful (I’m too embarrassed to show it here)! I really need to remember to do sketches in pencil before committing them to ink.

I’m still not good at capturing a place using all five senses in my writing.  It is still my goal to improve on that count. 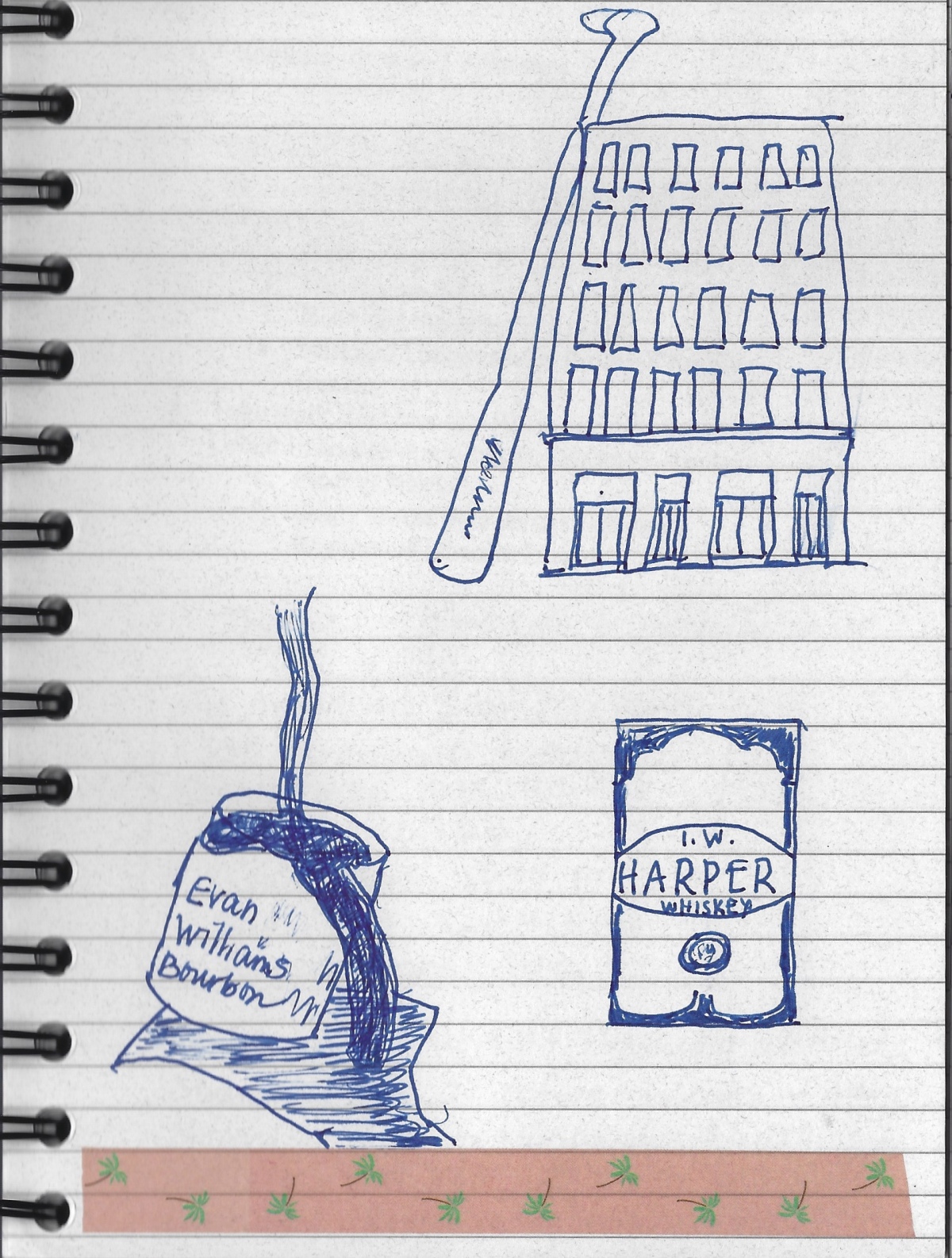 Louisville sketches in my journal

Include the link in the comments below by Sunday, October 6 at 1:00 p.m. EST.  When I write my post in response to this challenge on Monday, October 7, I’ll include your links in that post.