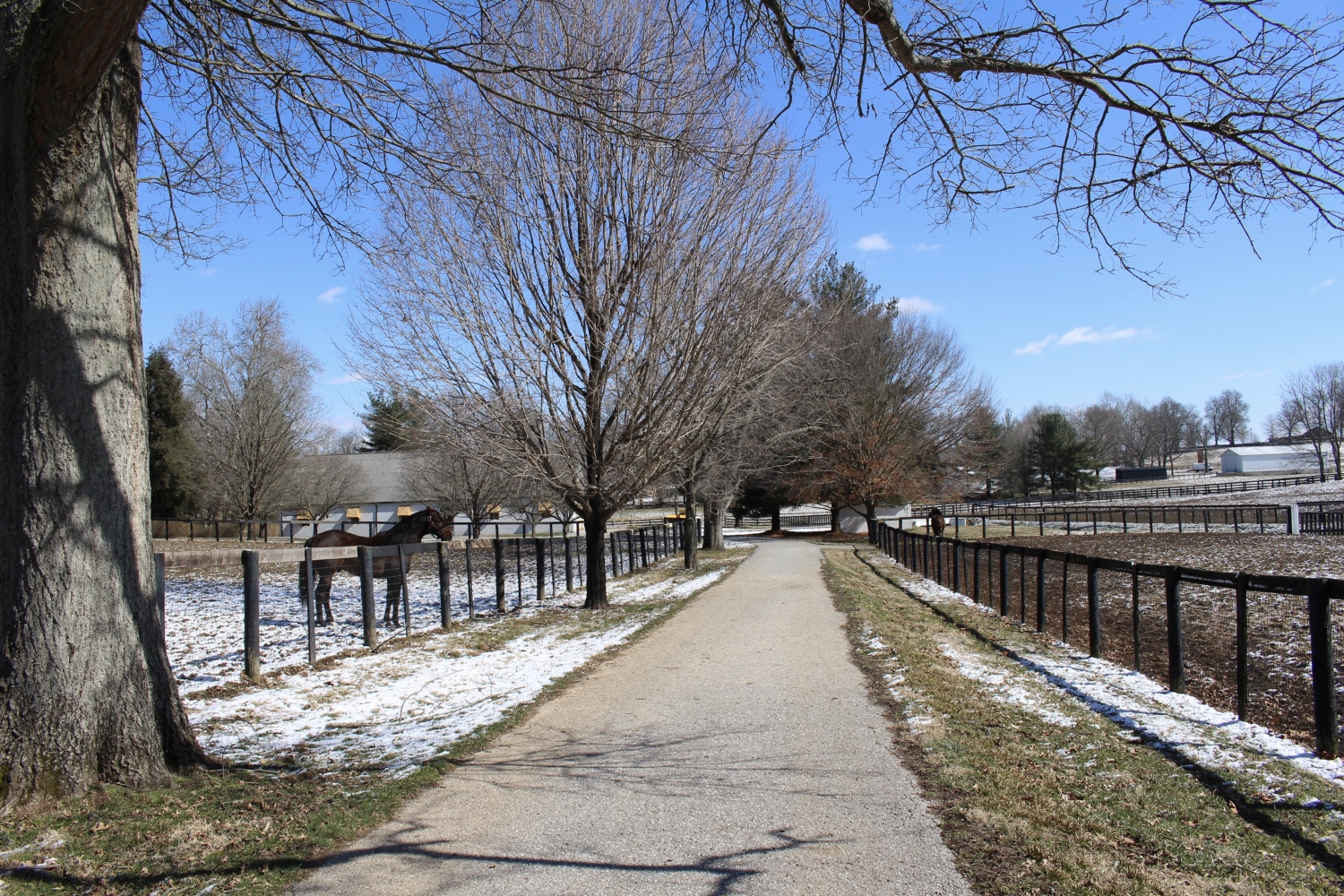 It was a Mardi Gras kind of day when we drove to the Horse Capital of the World in Lexington, Kentucky. We rolled over frost-bitten hills lined with wooden fences under corsages of clouds. Long shadows of fences and bare-branched trees lay etched on the snow, and horses grazed in the fields. When we got out of our warm car at Claiborne Farm near Paris, Kentucky, it was 19ºF, a biting cold that pierced through our hats and jackets right through to our bones.

On the one-hour guided tour, Joe, the Claiborne Farm stallion manager, explained risqué details on the breeding process as we stood outside the breeding shed; in this no-frills place, stallions and brood mares have produced over 80 champion racehorses. The top rated stallion in the world, War Front, has roughly 80 dalliances per year during breeding season (January-May).  War Front’s stud fee is $250,000 per shot, with a guaranteed foal. It’s estimated that the horse is worth about $80 million.

We walked the shed rows of iconic stallion barns, currently home to War Front, Blame, Runhappy, Unbridled, Easy Goer, Pulpit, Round Table, Orb, and others. We visited the cemetery of 20 champions, including the thoroughbred racehorse Secretariat. In 1973, Secretariat (1970 – 1989) became the first Triple Crown winner in 25 years. His record-breaking victory in the Belmont Stakes, which he won by 31 lengths, is widely regarded as one of the greatest races of all time.

Claiborne Farm is a 3,000 acre operation which has been owned by four generations of the Hancock family.  Arthur “Bull” Hancock, Jr. died in 1972; his death was discussed in the 2010 movie, Secretariat. Seth, his son, took over, syndicating Secretariat for breeding purposes; the horse stood at stud at Claiborne Farm from the conclusion of his racing career at the end of 1973 until his death in 1989.

We fed peppermints to some of the stallions, including Orb, who was “cribbing,” or gnawing on the fence. After being defeated in his first three starts, Orb won five consecutive races, culminating with a victory in the Kentucky Derby on May 4, 2013. He was retired at the end of the year to stand at stud at Claiborne Farm.

Hall of Fame for horses 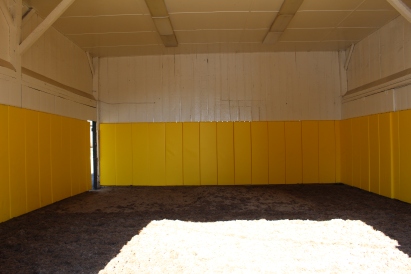 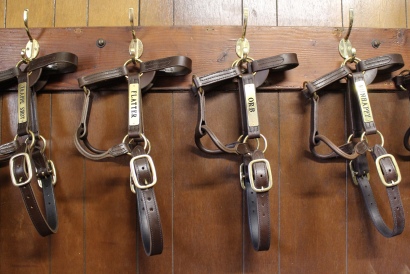 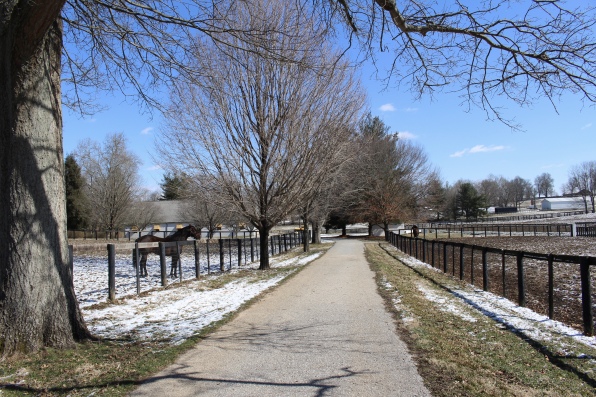 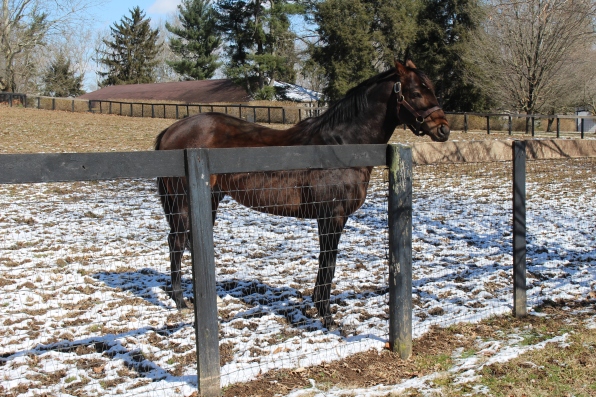 Mike & me at Secretariat’s grave 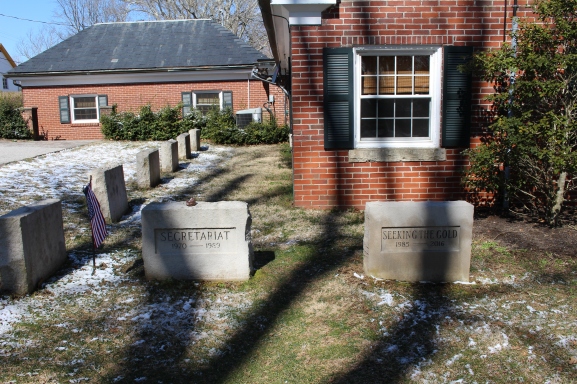 We met the wildly valuable, famous and friendly War Front.

Trying to thaw out after our hour-long tour, we ate Kentucky-style lunch at Lil’s Coffee Shop — steaming chicken noodle soup for me and chili for Mike, accompanied by sandwiches of egg salad and chicken salad — in the midst of antique & used furniture at J.J. Newberry Company. 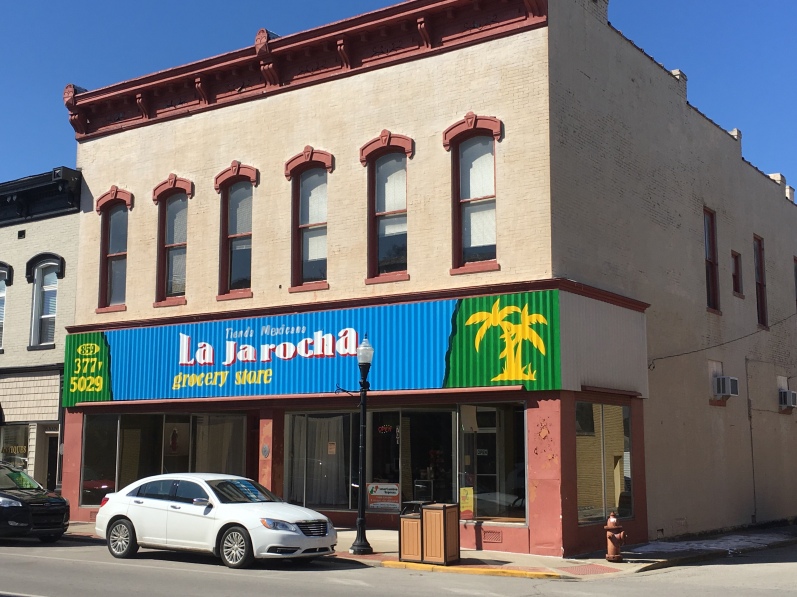 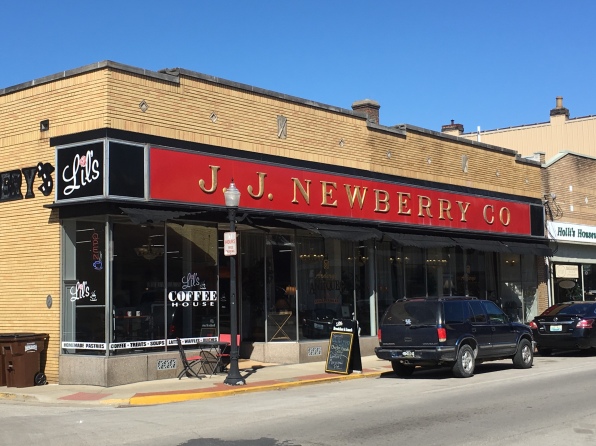 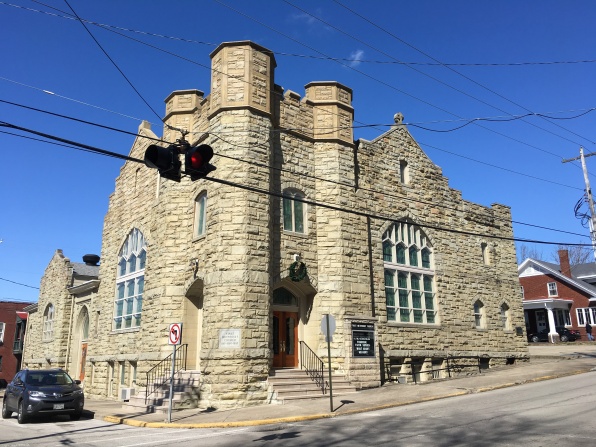 It was a day of layers, frozen fingers and toes, fuzzy hats, scarves, gloves and hand warmers.  A day of landscape dusted by snow, not about to melt even in the sun.  It was a day of immersion in a crystallized landscape, with Amish quilts on the sides of barns, cattle huddled in small groups, and horses grazing in sprawling pastures. A day where a sign at Transylvania University reminded us we were in Amish country: God is able to make greatness out of our great mess. 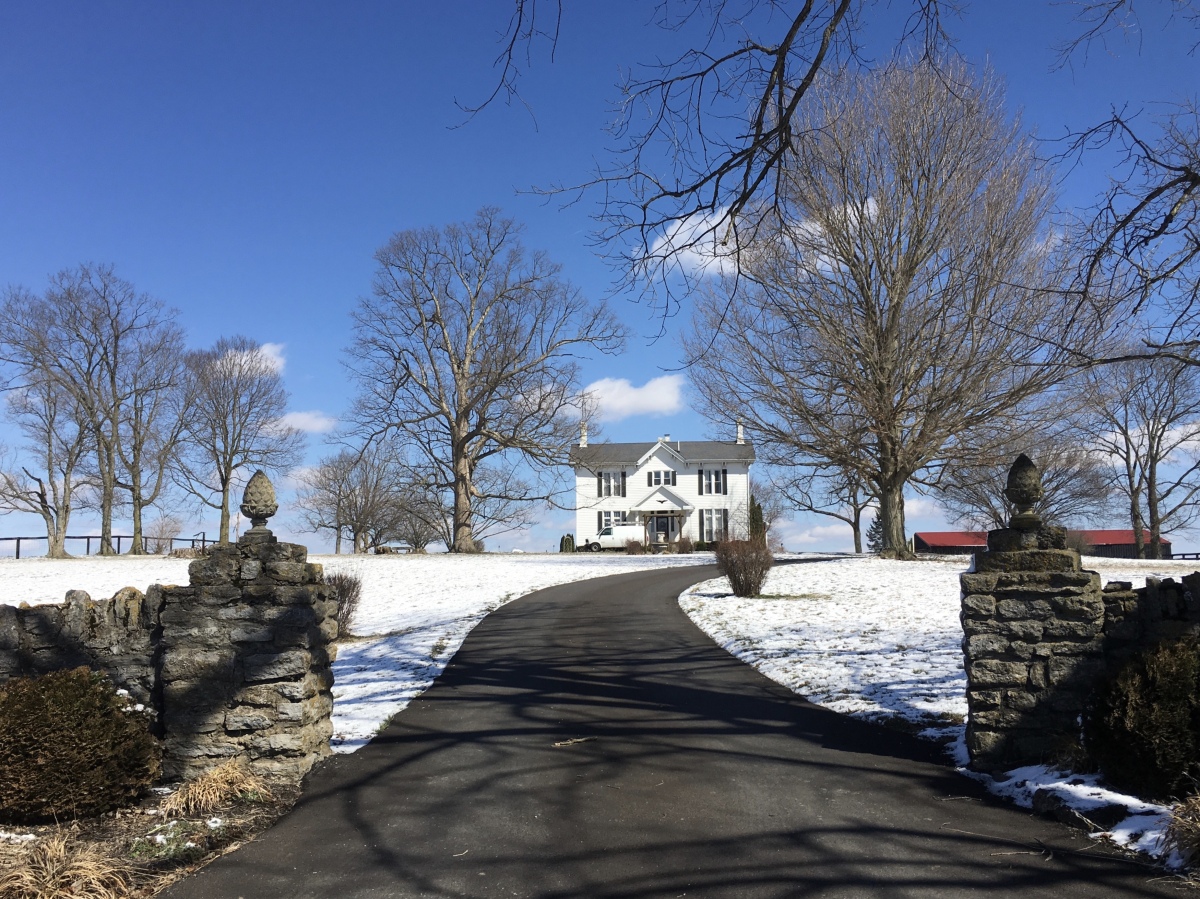 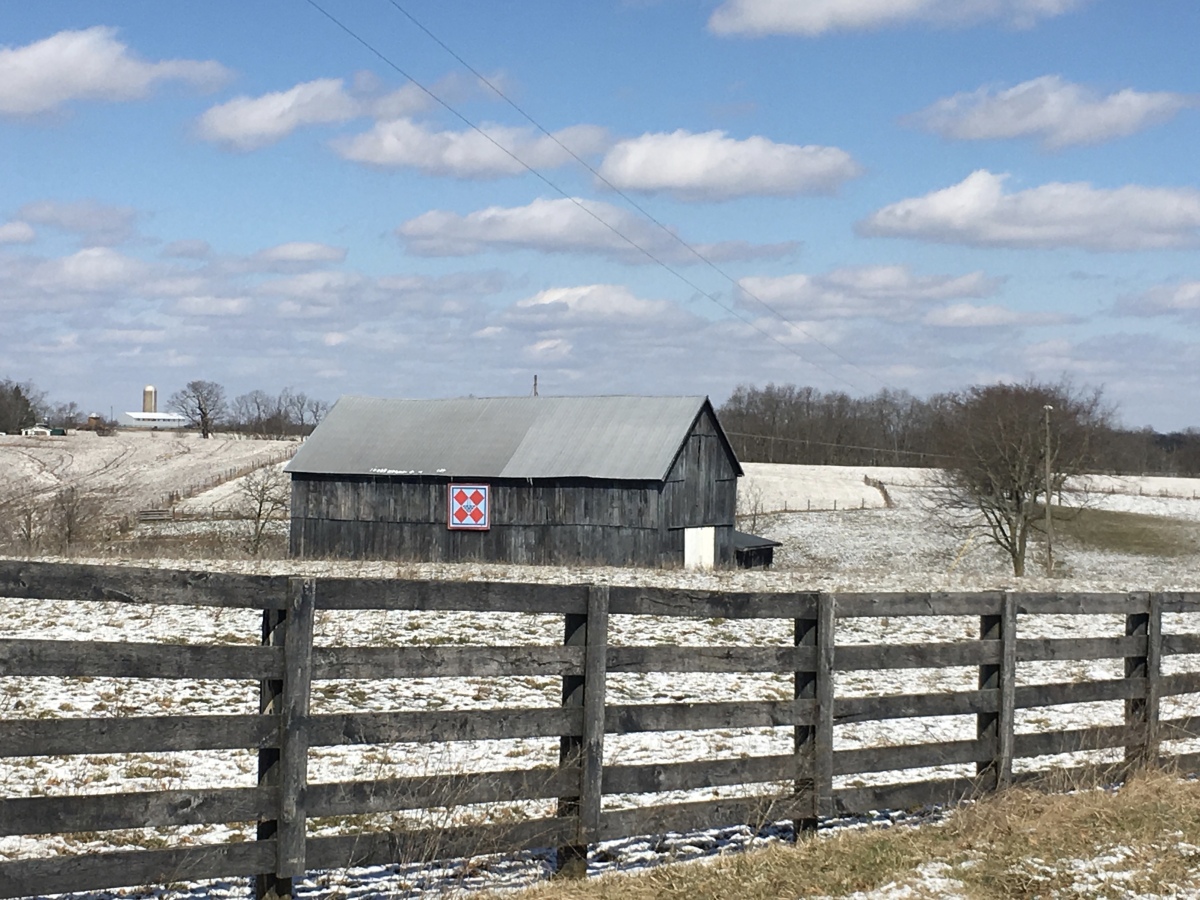 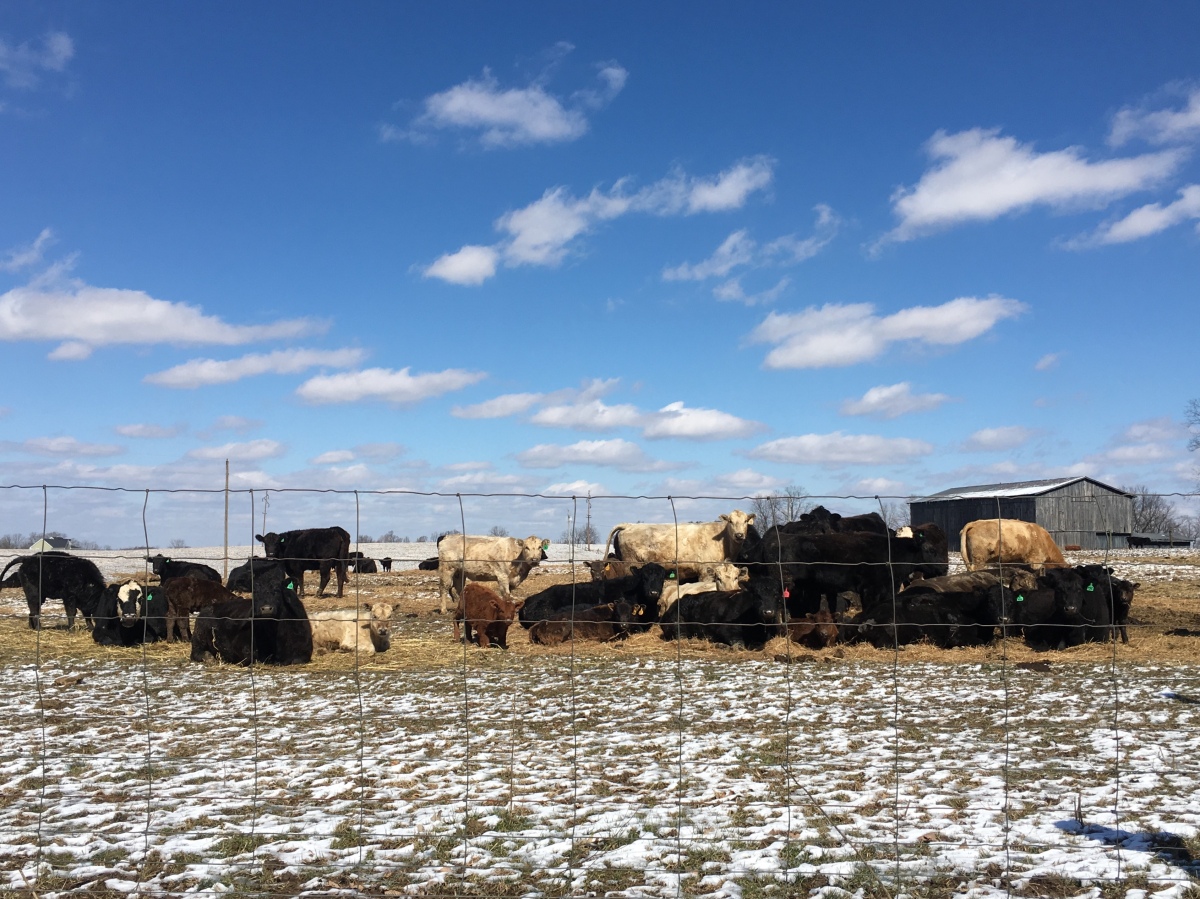 We drove to the Colville Covered Bridge, built in 1877, spanning Hinkston Creek. As of 1976, it was the last surviving covered bridge in Bourbon County and was listed on the National Register of Historic Places in 1974. 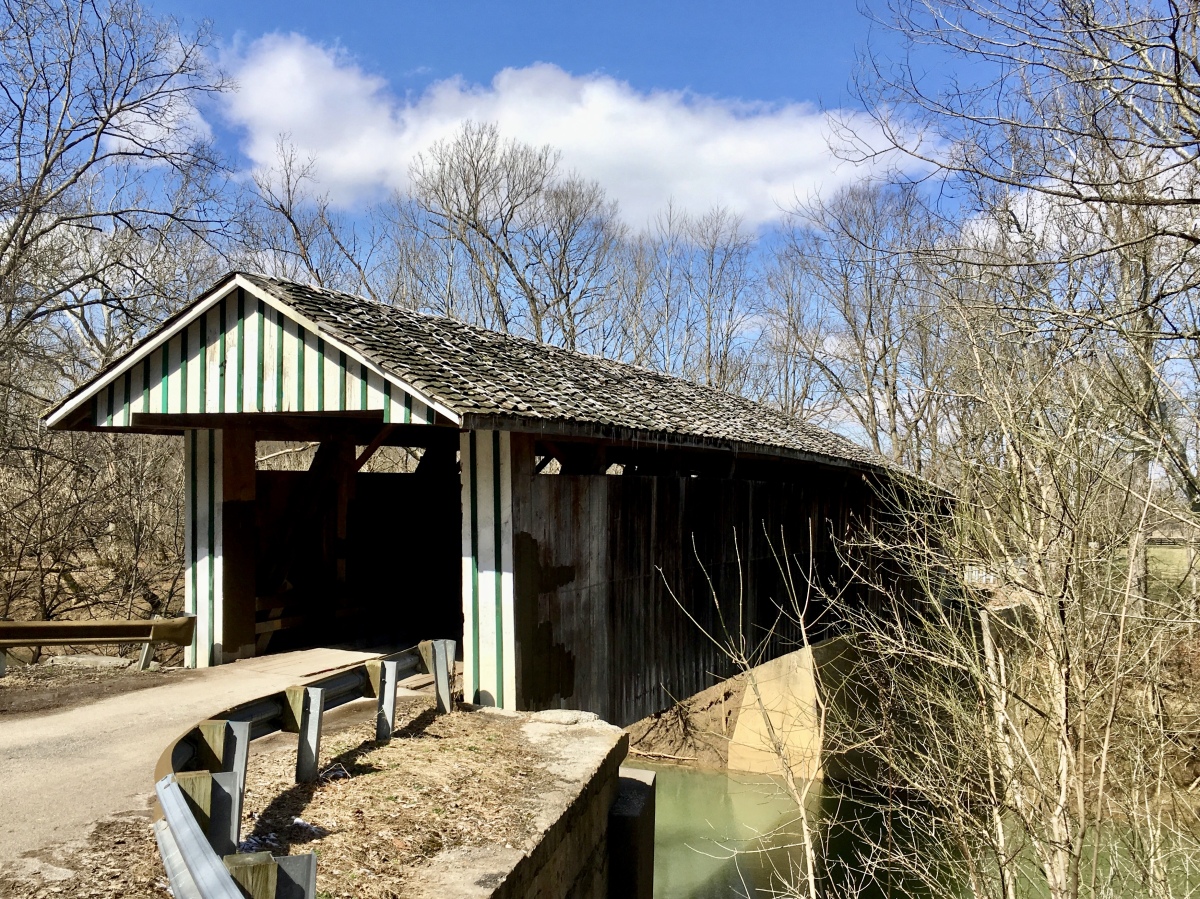 At the University of Kentucky library we stopped to see the Wade Hall Quilt Collection, but the small Amish quilts hung high on a tall wall in the midst of students chattering at study tables. The venue was disappointing. 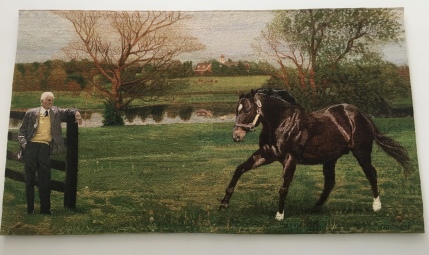 mural at University of Kentucky 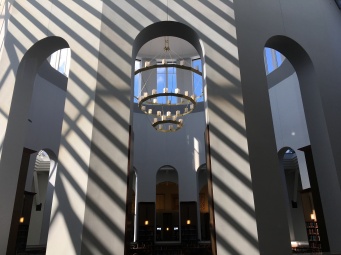 library at University of Kentucky

At Town Branch Bourbon and Alltech Lexington Brewing Co., we went on a half-hour tour of the brewery and a half-hour tour of the distillery. At the brewing company, we tasted Kentucky Ale, Kentucky Kolsch and other beers. At the distillery, we tasted bourbons.  The explanation of processes were too scientifically complicated for my little brain, and the tasting did nothing for me as I’m not a fan of bourbon. Obviously, many people are fans, however, as it is a lucrative business for Kentucky.  Bourbon has been featured in the Kentucky Derby’s traditional drink, the Mint Julep, for over a century. Each year, almost 120,000 Mint Juleps are served over the two-day period of Kentucky Oaks and Kentucky Derby weekend at Churchill Downs Racetrack. 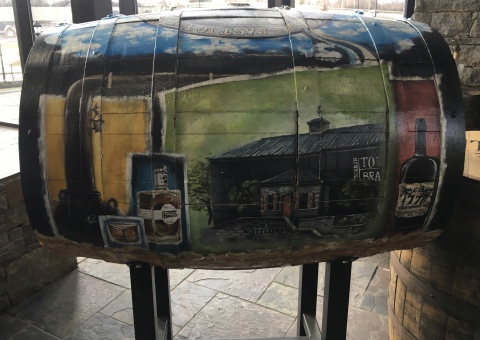 We ate an early dinner at Ramsey’s, where Mardi Gras purples and greens glittered on balloons and beads; waitresses wore festive masks. Instead of bread, we were served saltine crackers with butter. I loved my chicken and dumplings, sauteed spinach, and corn, tomatoes and okra with cornbread. Mike had mac & cheese,  green beans, fried green tomatoes and corn oyster.  Half his meal was frighteningly deep-fried. Mine was good comfort food, warming me up after the frigid day outside.

“PROSE” INVITATION: I invite you to write up to a post on your own blog about a recently visited particular destination (not journeys in general). Concentrate on any intention you set for your prose.  One of my intentions was to pick a theme for the day.  I knew we’d be in Lexington, so I picked “horses” as my theme.

Include the link in the comments below by Monday, September 23 at 1:00 p.m. EST.  When I write my post in response to this invitation on Tuesday, September 24, I’ll include your links in that post.

I am traveling from September 1 to October 4. If I cannot respond to or add your links due to wi-fi problems or time constraints, please feel free to add your links in both this post and my next scheduled post. If I can’t read them when you post them, I will get to them as soon as I can. Thanks for your understanding! 🙂