Sometimes we choose a journey due to constraints of time or money, to a place within driving distance. We might have visited a place earlier in our lives and only had time to skim the surface, so we want to return and delve deeper.

This the case with our call to Delaware.  We have several days we can venture out in January and we want a place within a short drive from our home in Virginia.  We’ve also visited a couple of places in Delaware over the years, but have only skimmed the surface.

Why Delaware?  The second-smallest U.S. state has a decent-sized city in Wilmington, some cute historical and beachfront towns, state parks, and a wildlife refuge.

On December 7, 1787, Delaware became the first state to ratify the Constitution of the United States, and has since been known as “The First State.”  As I’m still on a quest to fill up my National Park passport, we’ll make a stop at several of the seven sites that make up First State National Historical Park. These are spread throughout the entire state. The park focuses on the story of first settlement through the ratification of the United States Constitution. The sites include: Wilmington: Beaver Valley, Fort Christina, and Old Swedes Church; New Castle: New Castle Court House; Dover: The Green, Dover and John Dickinson Plantation; and Lewes: Ryves Holt House.

As second smallest state in the USA after Rhode Island, Delaware should be easily navigable.  There are sites in Upper Delaware, which include Wilmington and New Castle.  Lower Delaware includes shore areas such as Lewes, Cape Henlopen State Park, Rehoboth Beach, Dewey Beach, the Delaware Seashore State Park, and the Bombay Hook National Wildlife Refuge.

In June of 1990, when I was only 34, Mike and I, along with our friend Carroll, took part in a sprint triathlon on the grounds of St. Andrew’s School in Middletown, Delaware.  A sprint triathlon consists of a half-mile swim, 12.4-mile bike and 3.1-mile run.  As in most events such as these, athletes are seeded according to their normal speed, and since I’m so slow, I started in the last wave. My friend Carroll was in the wave ahead of me, and Mike was in one of the earliest waves.

The swim portion of the sprint triathlon at St. Andrews School.

After the swim, and at the end of the bike ride, I was at the tail end of the pack.  Race course sweepers on motorcycles were following closely behind me, and I got so irritated, I jumped off my bike and yelled at them, “Back off!”  By the time I reached the trail through the woods for the final 3.1-mile-run, I was truly at the end of the pack. I wasn’t happy about being last, as I’d already finished last in a 5-mile run in Coeur d’Alene, Idaho in 1982, an icy course called the Hangover Handicap on New Year’s Day. 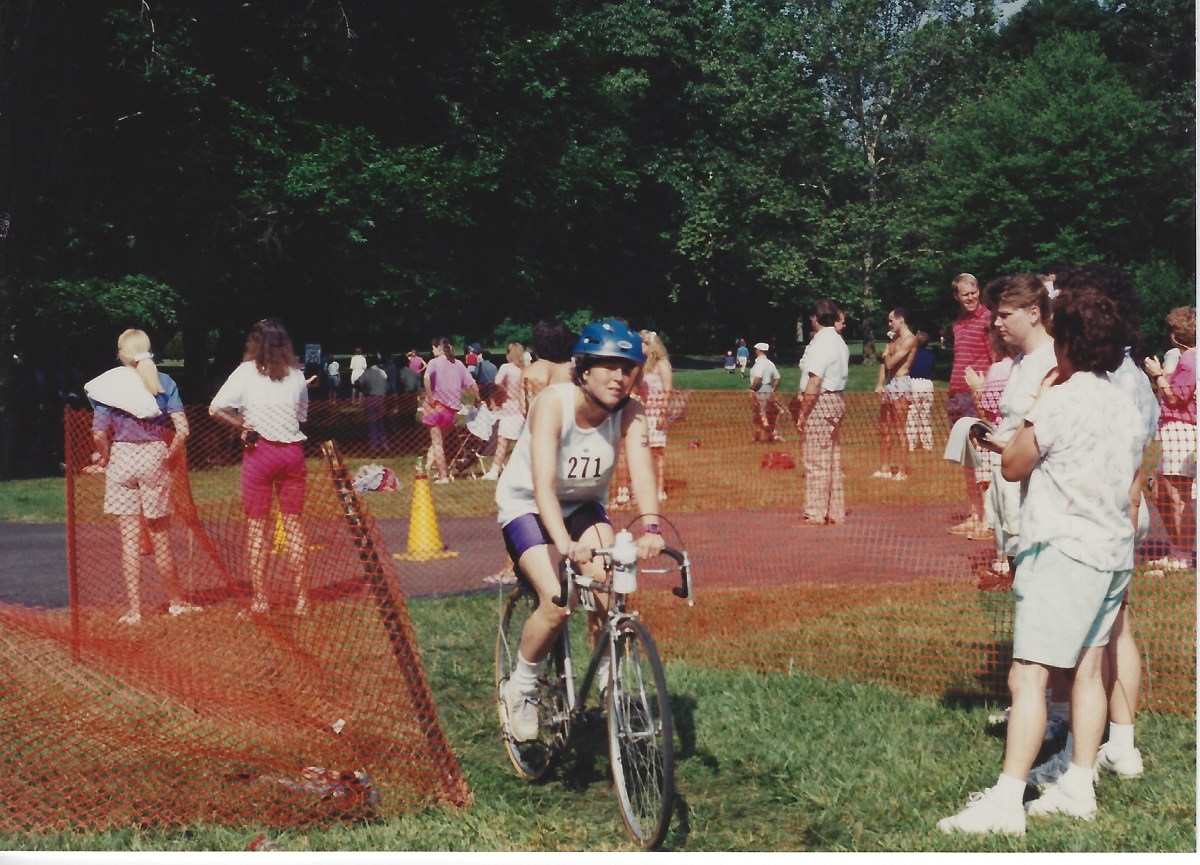 I take off on the bike, not looking very happy!

As I plodded along, I saw Carroll running ahead of me, which motivated me to pick up my pace.  As I caught up with her, we ran together for a bit, and then I apologized and told her I was NOT going to finish last, at which time I mustered all the energy I had and pushed ahead.  I finished second to last and Carroll last; she actually would have been last even if we had crossed the finish line together because she had started a wave ahead of me.  I still laugh about that incident, even though it is quite embarrassing, and very selfish! 🙂 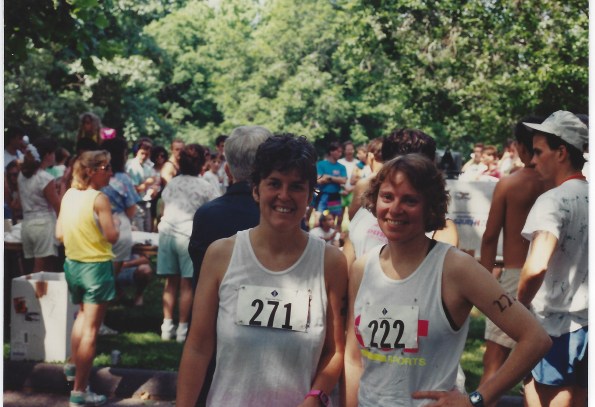 me with Carroll after the race

One of my favorite films, the 1989 Dead Poets Society starring Robin Williams and Ethan Hawke, was filmed almost entirely on the St. Andrew’s School grounds. It is a gorgeous campus, and visiting there took me back to scenes from that fabulous movie.

the lake at St. Andrew’s School

In 2004, I went to a writer’s conference at Books and Coffee in Dewey Beach, Delaware, which has now vanished, as have so many independent bookstores.  At that conference, I met the author Debra Puglisi Sharp, who had recently published her book, Shattered: Reclaiming a Life Torn Apart by Violence, which tells the story of her abduction and her husband’s murder by a man on crack cocaine.  She had been living an easy middle class life in her quiet Delaware neighborhood when violence struck and sent her life careening.

I also went to Rehoboth with my best friend Jayne in 2008 for a short visit, although I didn’t explore as I would have liked to.

I dipped again into Delaware in June of 2016 to visit Winterthur, the estate of the du Pont family, one of the richest families in America. According to Forbes:

DuPont started as a gunpowder manufacturer, later expanding into dynamite, paints, plastics, dyes and materials. Its scientists invented nylon, Kevlar and Teflon. It eventually evolved into a chemicals giant.

Winterthur was originally the home of Evelina Gabrielle du Pont and her husband, James Bidermann, eventually passing into the hands of Henry Francis du Pont in 1927 (winterthur museum, garden and library: a delaware country estate).

I won’t visit Winterthur again on this trip, but I hope to visit Nemours Mansion & Gardens, a 77-room Louis XVI-style château built by Alfred I. du Pont.   It also boasts the largest formal French gardens in North America, a Chauffeur’s Garage housing a collection of vintage automobiles used on the estate, and nearly 200 acres of scenic woodlands, meadows and lawns.

Last December, I ventured to Cape May, New Jersey (a mid-december escape to cape may) and despite its being freezing cold, I enjoyed walking on the beach and having it all to myself.  Travelers can cross the Delaware Bay from Lewes, Delaware to Cape May, N.J. by ferry, but I drove directly to Cape May last year.

It’s fun and festive to visit small towns in America when they’re all decked out for the holidays, so I hope they’ll still be festive when we visit.

As none of our adult children will be home for Christmas this year, we hope to celebrate part of the holidays by having a little adventure. 🙂 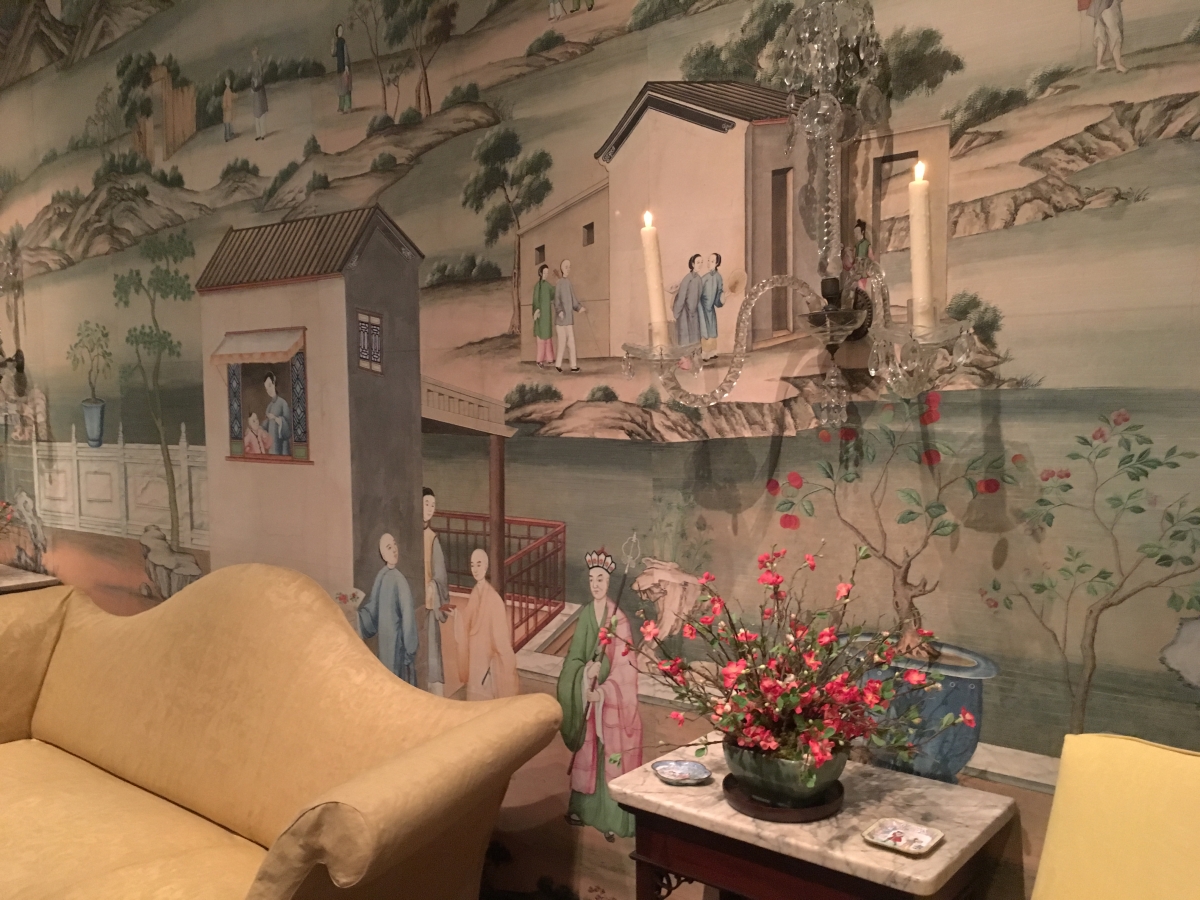 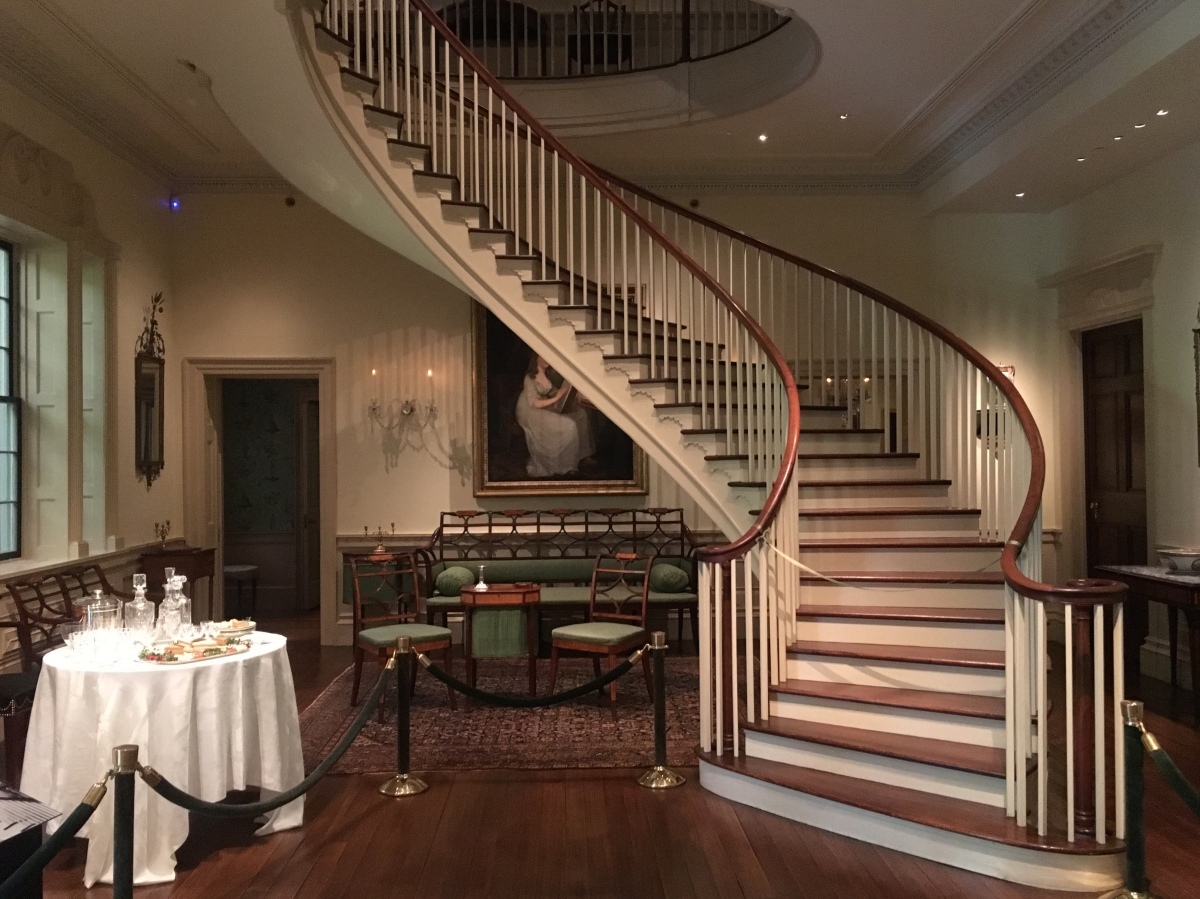 Include the link in the comments below by Wednesday, January 23 at 1:00 p.m. EST.

This will be an ongoing invitation, on the fourth Thursday of each month. Feel free to jump in at any time. 🙂