Chanting at 6:15 on Tuesday morning nudged us pilgrims from our dreams.  At a breakfast of muesli, bread and coffee, Joseph at Beilari warned that the weather over the Pyrenees was expected to be stormy and possibly dangerous on Wednesday.  He suggested we shouldn’t stop overnight in Orisson but continue straight through to Roncesvalles.  Alternatively, we could go the lower valley route to Valcarlos. Ingrid and I debated whether to heed his advice but decided to stick with our plan to stay the night in Orisson.  I set my backpack aside to be transported ahead and began to walk by 7:30, with an omelette sandwich from Beilari in my day pack.  Pilgrims emerged from various hostels, fresh and hopeful, and converged on the road leading out of St-Jean-Pied-de-Port like troops heading out to do battle.

Wearing shorts and a t-shirt, and carrying my trusty LEKI hiking poles, I walked with Ingrid and countless other pilgrims, up and up, a constant breathless climb.  Fuzzy sheep dotted green fields that skirted forests of chestnut and white beech trees. Window boxes blooming with impatiens, fuchsia, and Australian sword fern decked out whitewashed farmhouses.

French drivers veered maniacally around us, between us. Under a tree, an Italian man pulling a trolley regaled us with Italian opera – Pavarotti.  We stopped and listened, laughed and clapped. We were all so hopeful and excited and nervous, and here we were, listening to opera under a tree on a mountainside.

From pilgrims passing by, conversations echoed in Danish, French, Spanish, Korean and German. Cows studied us, chewing placidly on grass, and a donkey brayed.  Cowbells clanked, their music sashaying through the trees.  Cornfields gleamed as if the sun had soaked into each stalk. Tidy bales of hay dotted the fields. Along the path were yellow arrows, often crudely painted on trees, rocks or signposts.

It was a very steep climb for five miles, especially toward the end, but the views were stunning. Emerald mountains unfurled around us, in undulations and rumples.  I stopped not only to catch my breath but to take photos. And to eat half of my omelette sandwich.

When we reached Orisson at 11:15 a.m., we were given tokens for a 5-minute shower. Ingrid lost hers immediately and was afraid to ask for another because she might get yelled at.  I advised her to come clean, ask for another right away, so they’d know she hadn’t had time to use it and ask for another. She did and they gave her a replacement.  She and I were first in the side-by-side showers, laughing and joking as we hurried to get rinsed off within the 5-minutes.  We both had time to spare. After drying with our washcloth-sized towels, we dressed in what we’d hike in tomorrow, washed our clothes and hung them on the line outside to dry.  My pilgrim credenciale got bent and warped at the edges from carrying it in my waist pack and sweating all day.  I wrapped it in a plastic baggie, where it would stay for the rest of my Camino.

Our pleasant room had six bunks with windows opening onto views of the Pyrenees. Ingrid and I, first in, grabbed bottom bunks. Our roommates were Joyce from Connecticut, Marianne from the East Coast of Canada, and Bridgett and Jeannette from Ottowa. Joyce, Bridgett and Jeannette had large hardshell suitcases they were transporting ahead each day, arranged by a tour company.

On a platform overlooking the Pyrenees and the impossibly green valleys, we sat at picnic tables with other pilgrims and talked. An Irish guy named Cyril told of his struggles working on various farm operations, how he understands cattle more than the owners, how he milks an endless line of cows each day. David and Michelle from Britain just retired and said they have an adventurous spirit.  They wanted to start a new life, now that their children were grown and they had free time.  Big and sturdy, they both had a general roundness to them: she with a blonde pixie cut, he with a big belly, a ruddy complexion and a bemused expression.  Lisa from Leesburg, Virginia, not far from my home, told in dramatic fashion about how she can walk forever and carry a pack with no problem, but going uphill is another matter.  I listened, laughed, drank wine and ate the other half of my omelette sandwich.

It was a long afternoon.  Trying to nap in our room proved elusive, especially as someone with a drone was directing it outside of our window, looking in.

At our pilgrim dinner of soup, baked chicken, peas and potatoes, we all introduced ourselves.  We were told the forecast for tomorrow was fine.  I decided I must trust, have faith, that it would all work out in the end. 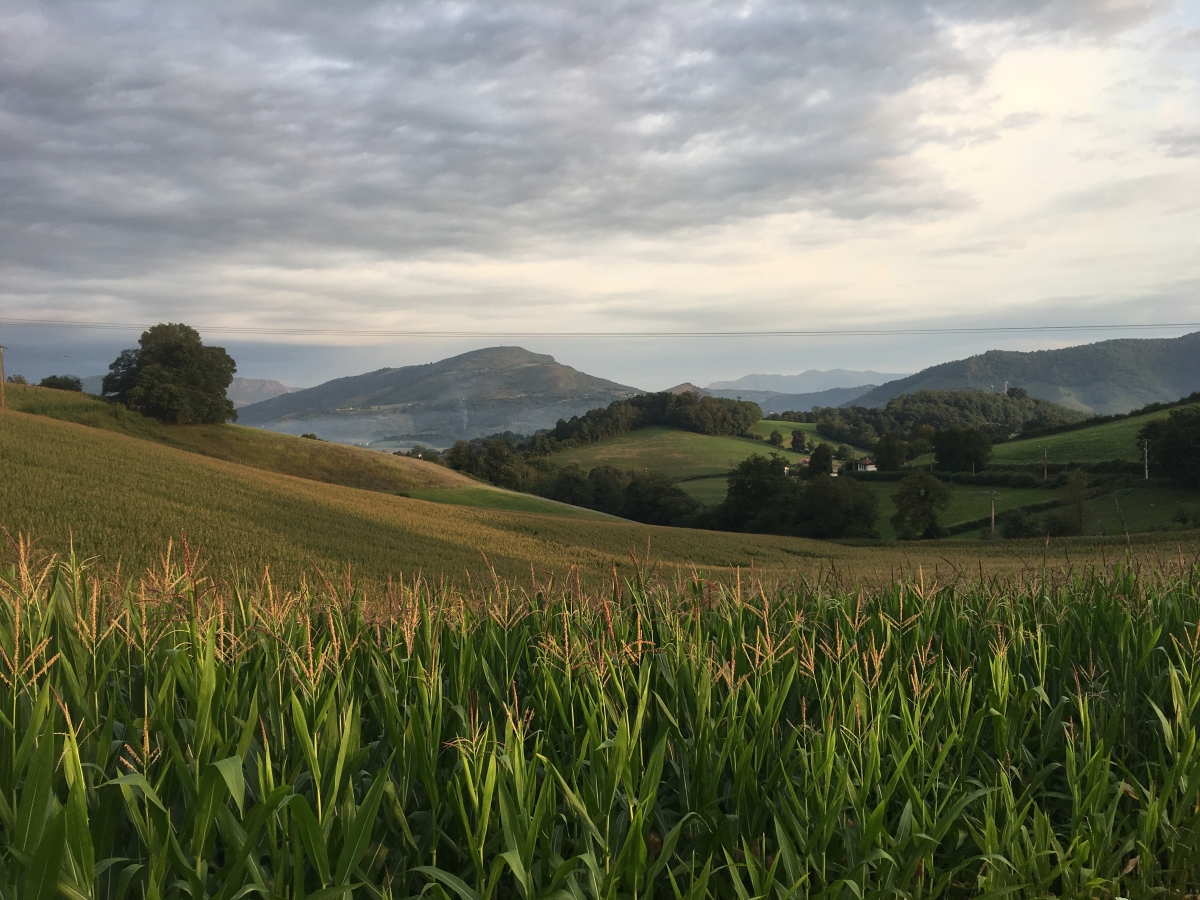 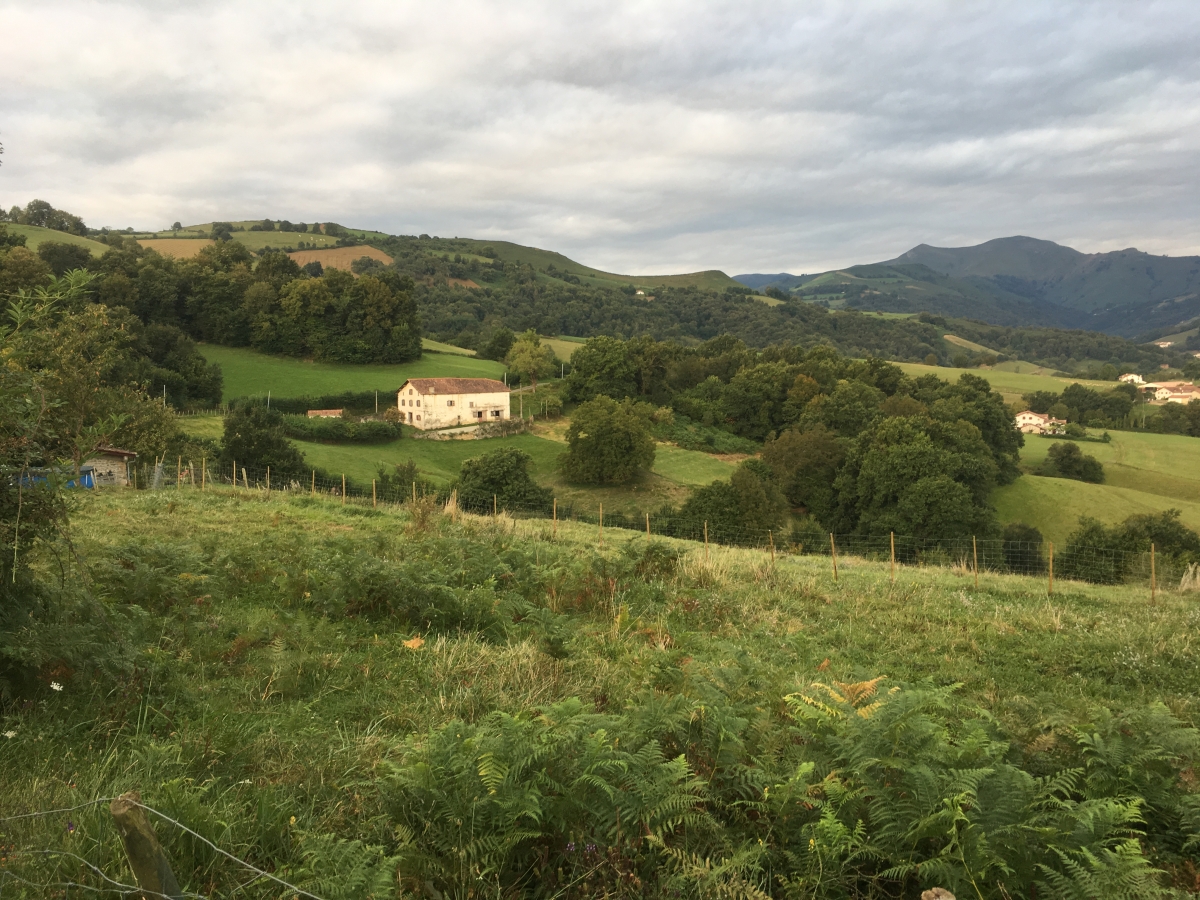 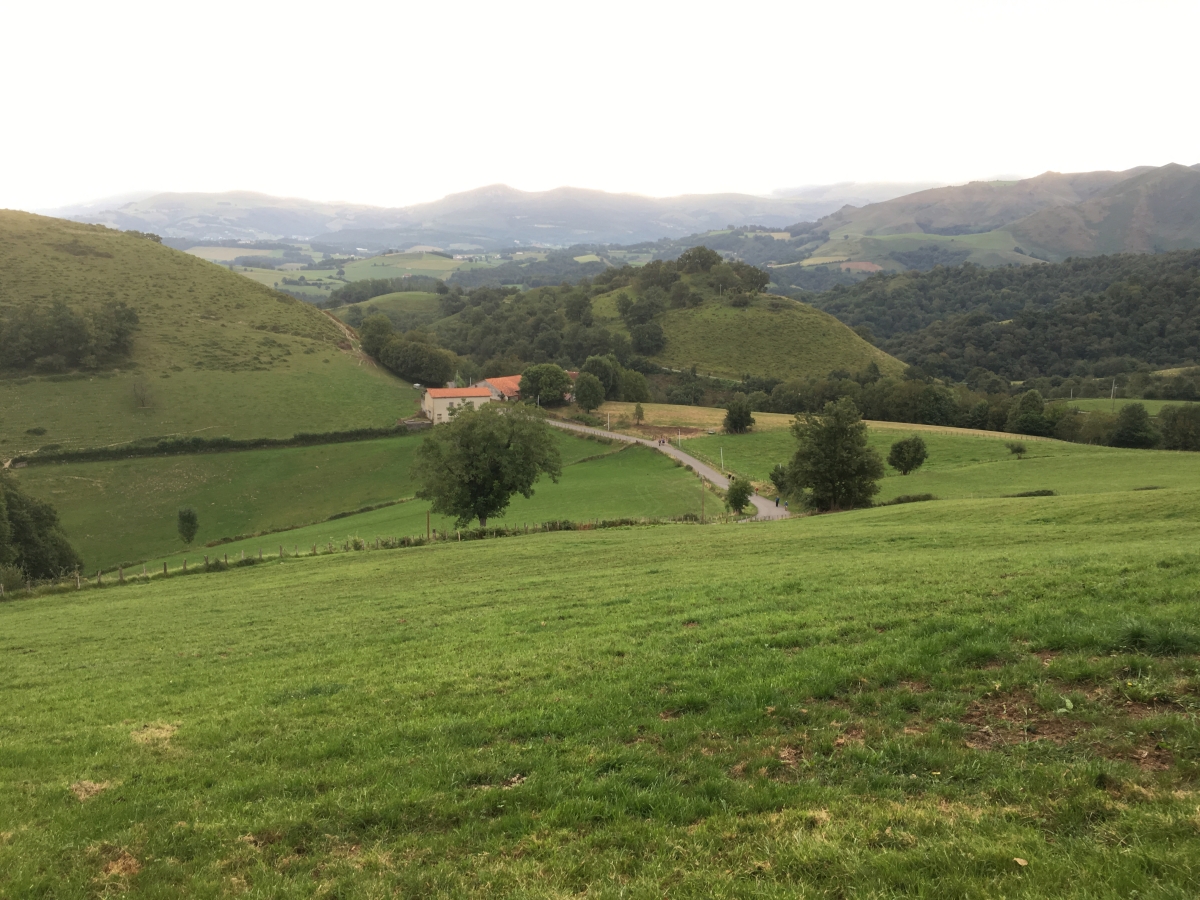 the path behind us

me on the Camino 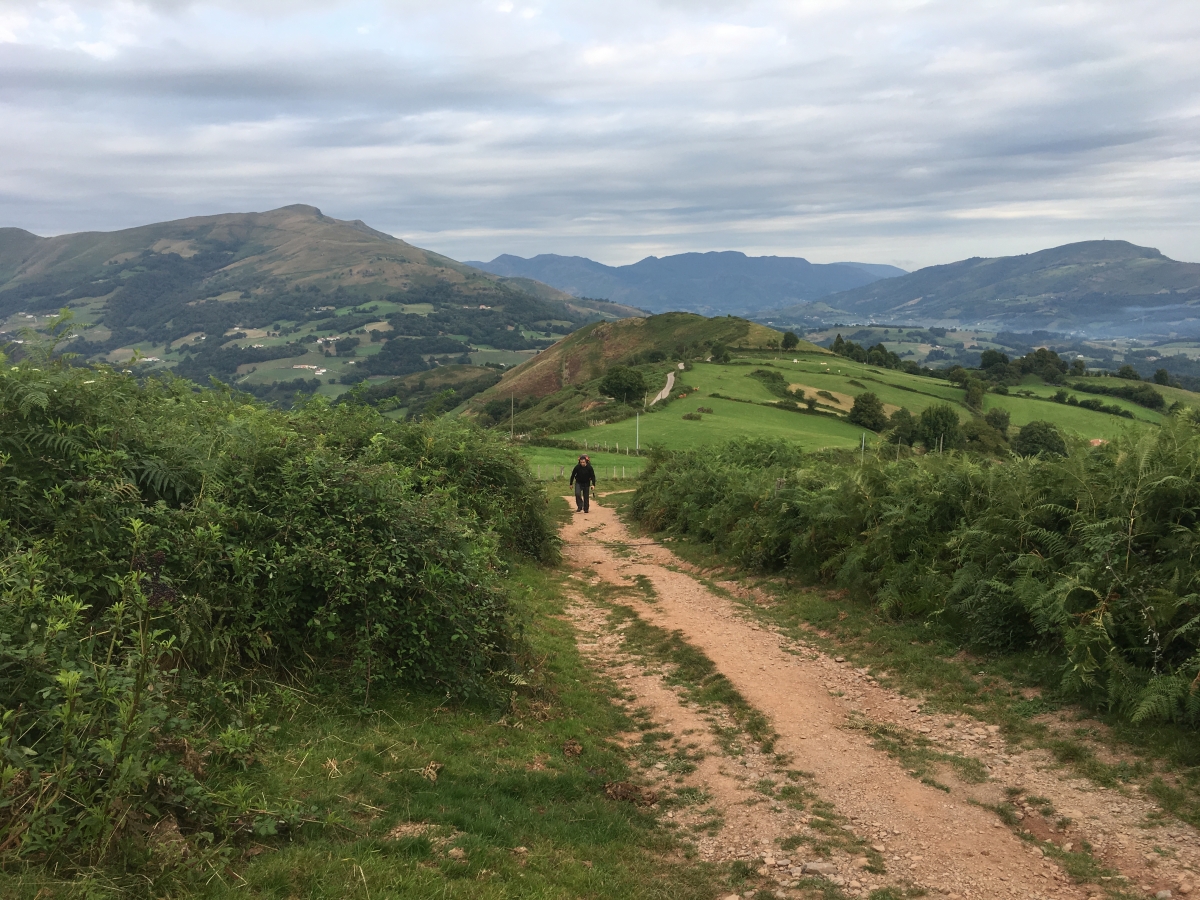 sweeping views of the Pyrenees 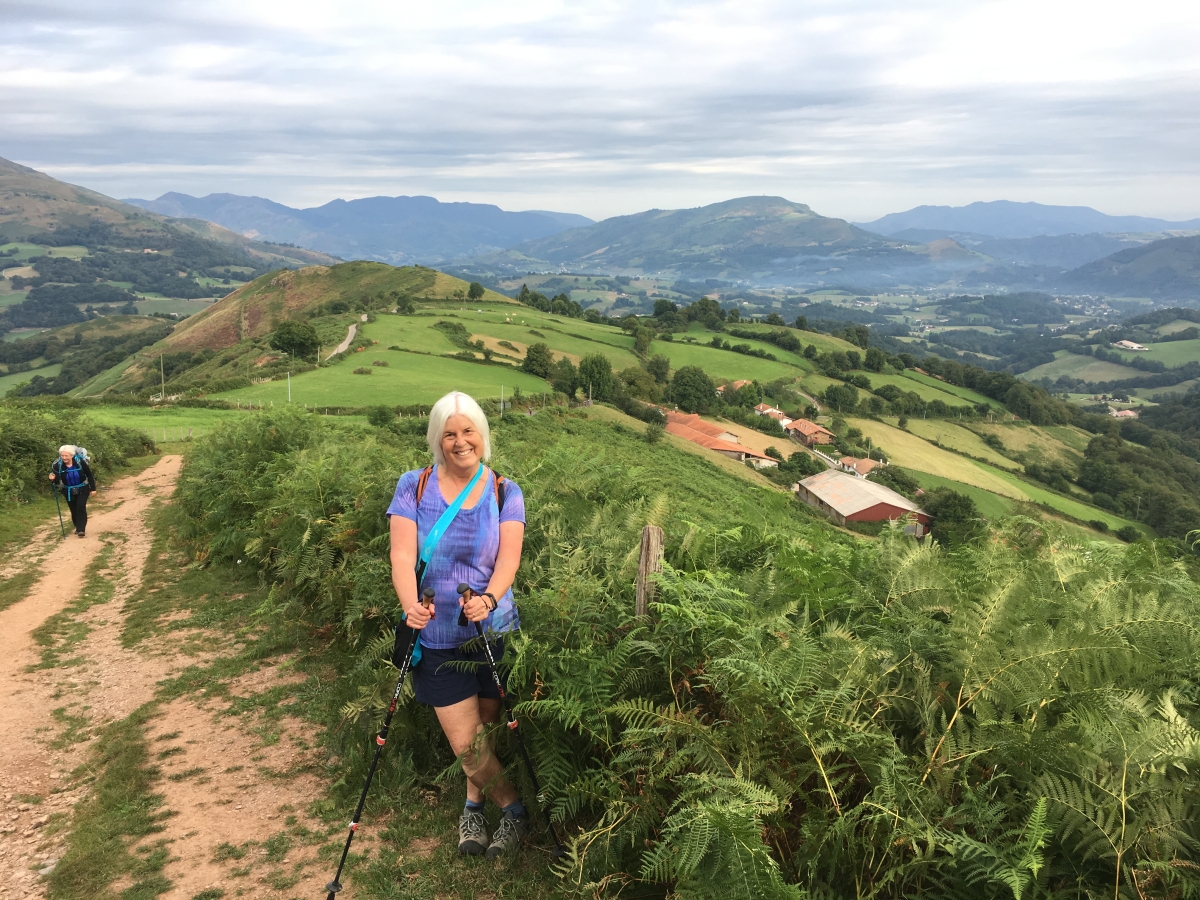 me on the trail

me with Ingrid walking up and up 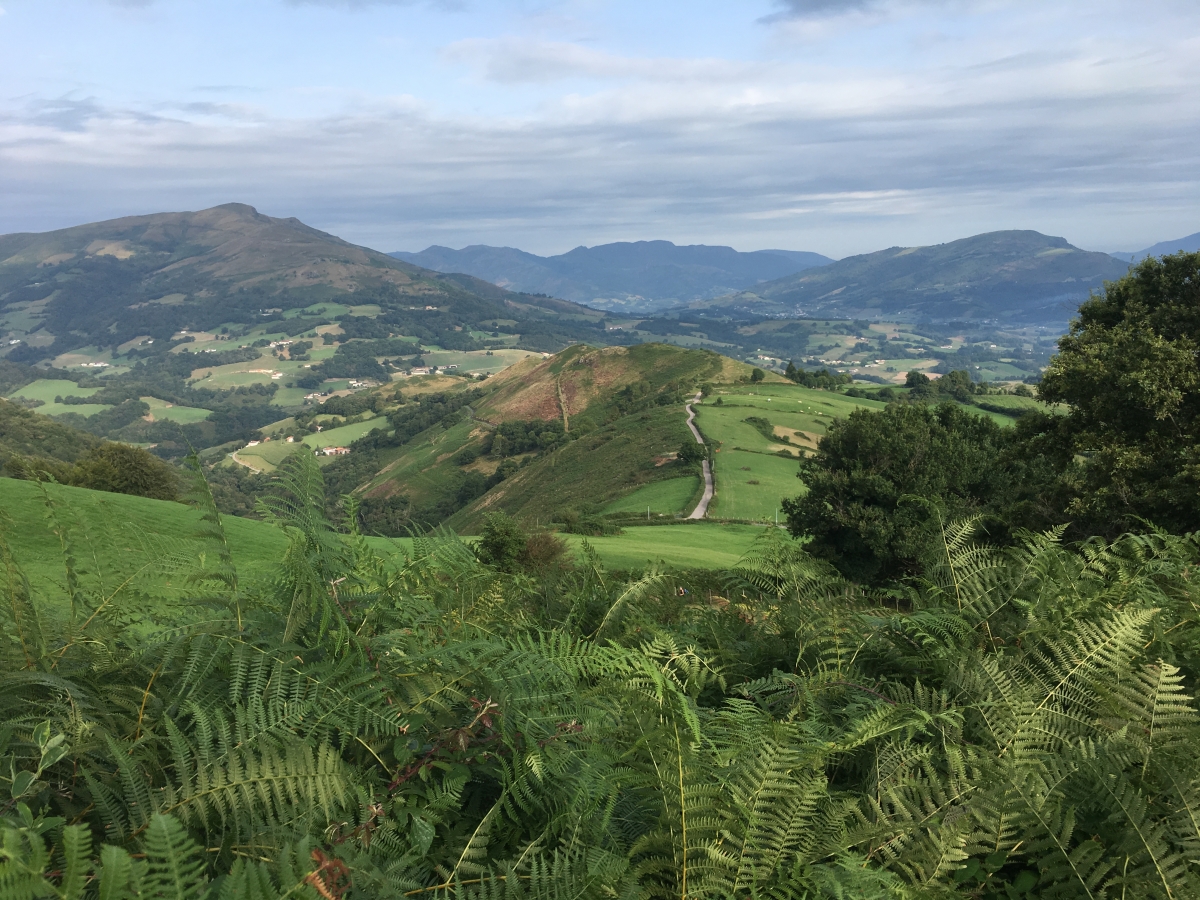 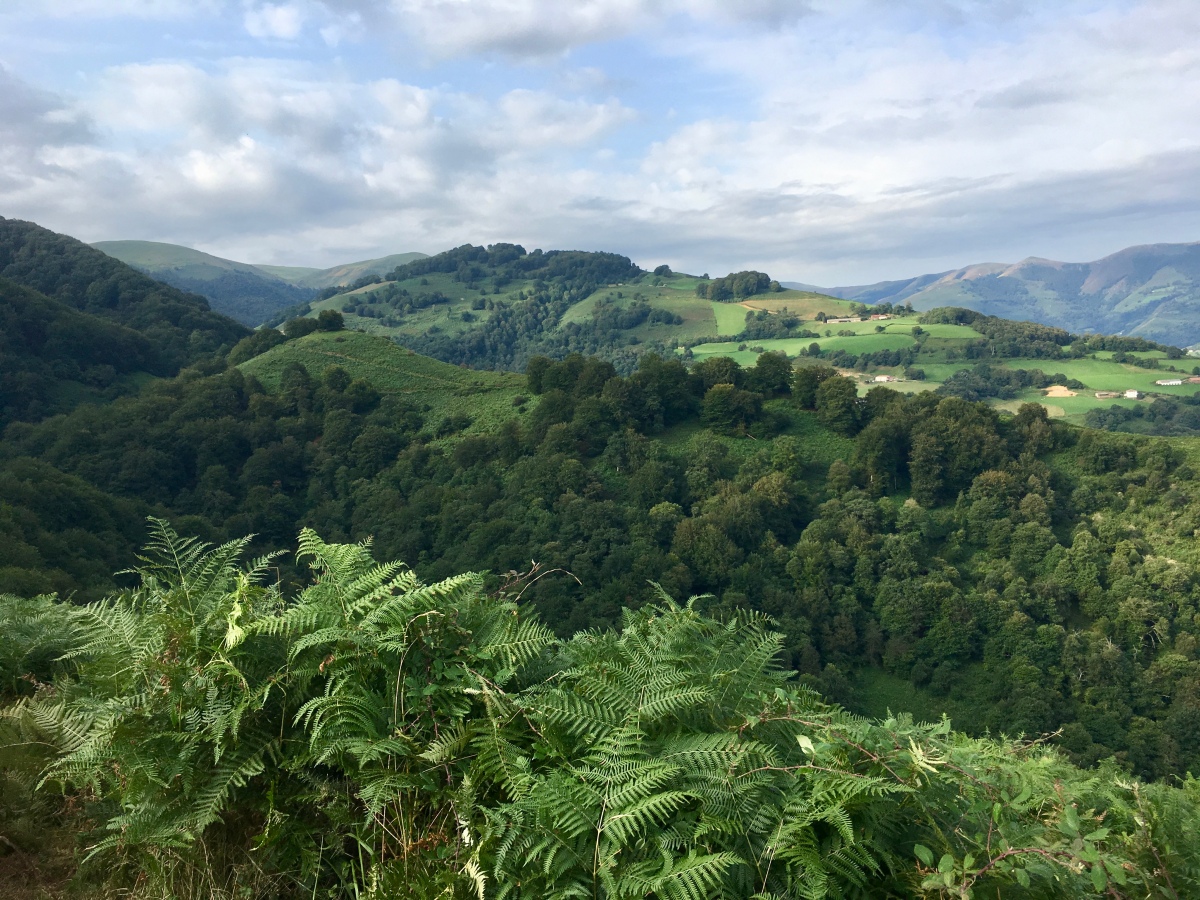 view from the outdoor cafe at Orisson

“PROSE” INVITATION: I invite you to write up to a post on your own blog about a recently visited particular destination (not journeys in general). Concentrate on any intention you set for your prose.  In this case, one of my intentions for my Camino was to write using all my senses to describe place and to capture snippets of meaningful conversations with other pilgrims.

Include the link in the comments below by Monday, January 7 at 1:00 p.m. EST.  When I write my post in response to this invitation on Tuesday, January 8, I’ll include your links in that post.