I took myself to Cape May in sub-zero temperatures and blustery winds in the dead of December, loading my Toyota Corolla with heavy sweaters, a down coat, gloves, a hat, boots and tennis shoes.  I brought a desire to be alone and at peace, to escape from our son’s endless stream of challenges, and to simply wander haphazardly, pay attention and take photos.

Heading north on I-95, I played my Spotify playlist, On the Way to Cape May, putting me in a Jersey state of mind.  I chuckled as the John Pizzarelli Trio serenaded me with a mishmash of how different singers would sing about New Jersey.  🎶 “Travelin’ down the turnpike, headin’ for the shore… Forty-seven shoe stores line route 22.” 🎶

In his Paul Simon version: 🎵 “gas stations we have scores… Some states have their rock stars, oh but Springsteen beats them all… Lots of dineries, oil refineries, our highways make you cough… The drinking spots and used car lots make the place just grand.” 🎵

🎼 “It’s another New Jersey sunrise,” Pizzarelli sang in a Beach Boys version of “Tequila Sunrise.” “Philly dogs like chili dogs they eat in Cherry Hill, woo-ee-ooo… There are no Jersey strangers, just friends we haven’t met.” {Instrumental} “Hey, let’s go to Jersey now, everybody’s learning how. Come on out to Jersey with me.” 🎼

He added the Lou Reed version to the tune of “Walk on the Wild Side:” 🎶 “Our famous parkway, it’s the dark way… you’d think for all those quarters, they’d turn the road lights on… And have no pity, Jersey City, once again we’ll shine…” 🎶

People certainly have a sense of humor about the Garden State! 🙂

Crossing over the towering verdigris-colored Delaware Memorial Bridge, I paid homage to veterans from both New Jersey and Delaware who died in the Korean War, the Vietnam War and the Persian Gulf War, to whom the twin suspension bridge is dedicated.

After crossing the Delaware River, I exited onto Route 40, where I stopped at a gas station and struggled to get my credit card to work in the gas pump. A lady in a monstrous SUV pulled up and rolled down her window.  “You’re not allowed to pump your own gas in New Jersey.  It’s great!  We never have to get out of our car.  I saw your Virginia plate and could see you were confused.” I was glad she informed me of this; I had no idea!

A white-bearded attendant lollygagged over to pump my gas.  I asked him if they had a bathroom inside and he dismissively shook his head.  I said aloud to myself, with the window open, “What? Crap! Why did I stop here?”

A burly African-American man poked his head out from the other side of the pump, where he was wiping the windshield of his huge burgundy pickup.  “Mam, there’s a sign over there that says there’s a restroom around the corner, outside.”  I frowned as I saw a porta-potty beside the building; I had no choice but to use it. A half mile further, a Wawa and a McDonald’s turned up, offering clean indoor facilities — too late for my needs.

Along Route 40, I passed a long lanky cowboy at Cowtown Rodeo.  Mike told me later he remembered seeing that cowboy on a high school road trip in 1972. 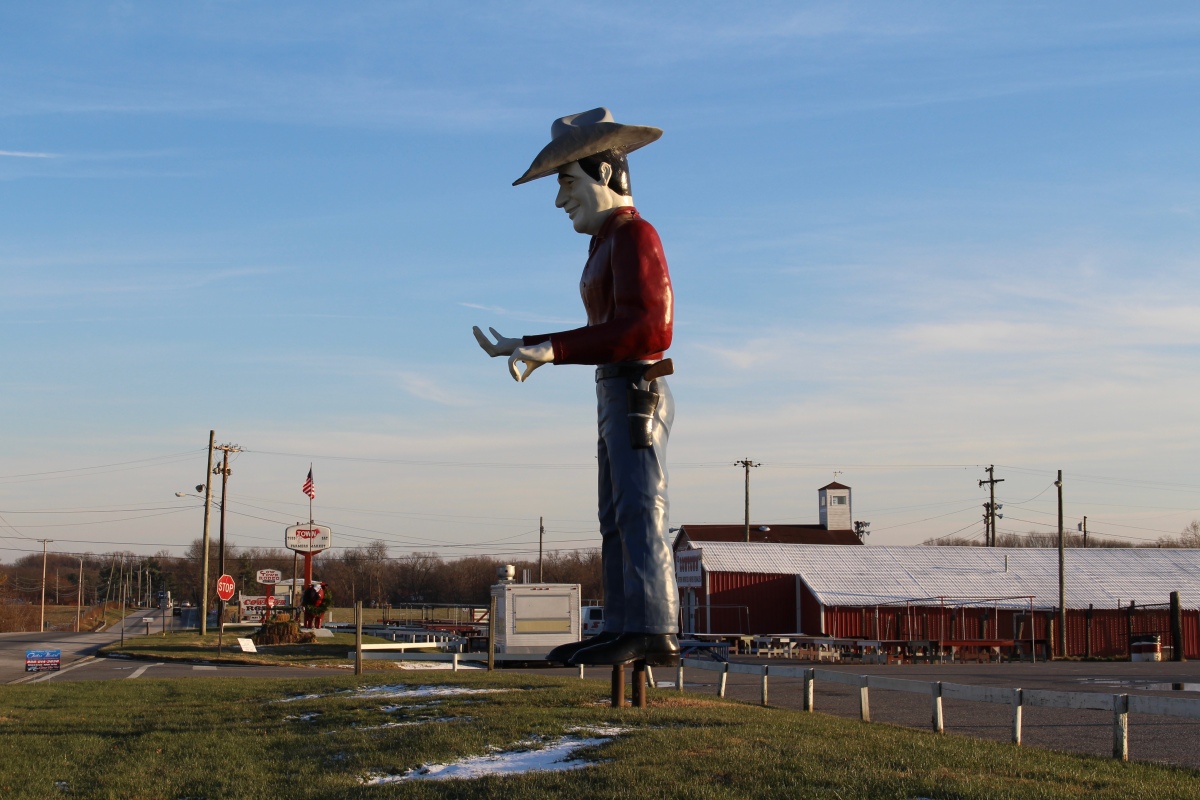 Across the street, John Wayne sat astride a horse in front of Cowtown Cowboy Outfitters, selling “the very best in Western wear since 1958.” Saddles, Western boots and hats, were flung over fence posts outdoors, enticing wanna-be cowboys to drop in.

I passed barns, silos, flat farmland, a big truck shop with the truck cabs tilted forward as if yawning. A John Deere tractor shop gleamed with green and yellow tractors and farm equipment.  RVs squatted for sale in a big lot.

I drove past the Boro of Elmer, brown derelict corn stalk stubs, Malaga, Porchtown, South Jersey Classic Cars, signs for Atlantic City, apple orchards and Bishop’s Produce Stand. Kountry Kitchen offered “Good Vittles,” but I had my heart set on lunch in Cape May.  I whizzed past Pinelands Nature Reserve and a “SHEEP FARM” sign, and around a traffic circle in the township of Dennis, where, whirling like a dervish, I sang along with Desert Sessions, “I Wanna Make It Wit Chu,” and later, “Livin’ on a Prayer” with Bon Jovi. 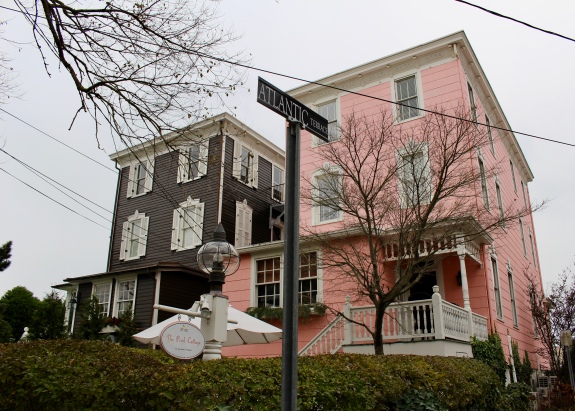 my 3rd floor room in The Pink Cottage

“ON JOURNEY” INVITATION: I invite you to write a 750-1,000 word (or less) post on your own blog about the journey itself for a recently visited specific destination. If you don’t have a blog, I invite you to write in the comments. Include the link in the comments below by Tuesday, April 10 at 1:00 p.m. EST.  When I write my post in response to this challenge on Wednesday, April 11, I’ll include your links in that post. My next post will be about my road trip to Nashville, Tennessee.  If you’d like to see the original post about this invitation, check out: on the journey: taking ourselves from here to there.

This will be an ongoing invitation, once weekly through April, and monthly after that. Feel free to jump in at any time. 🙂