Gentle chanting pulled us from our dreams on Monday morning at 6:15.  The pilgrims in my room stretched, whispered, and rustled in the dark until everyone was awake.  Once lights were on, they taped feet, organized backpacks, ate breakfast. I was the only pilgrim that would stay another day before walking, and the hospitaleros at Beilari told me I would have to leave the albergue at 8:00 a.m.  I could return at 12:30 through the back door, though new pilgrims wouldn’t be admitted until later.  While everyone got ready to leave me behind, I put rock tape on my knee and did some physical therapy exercises.  At 8:00, I was out the door.

St-Jean-Pied-de-Port nestles in the foothills of the Pyrenees in the French Basque countryside, at the “foot of the pass” (pied-de-port) to Roncesvalles in Spain.  I strolled in the cool morning air on the cobbled rue de la Citadelle.  On the façades of the stone buildings, window boxes overflowed with petunias and impatiens. At the far end of town, I walked through the 15th-century Port St. Jacques, where pilgrims walking from other parts of France enter the town to begin the Camino Frances.

I climbed to the Citadelle for views over the walled town and the Pyrenees. Built on the fortified château of the kings of Navarre, it is a stronghold with moats, firearms, swing bridges, draw bridges and walls flanked by bastions.  Below, a gauzy layer of mist lay fetchingly in the mountain folds and wove its way through the valley. There were few people at this hour; I encountered only a couple of large slimy tan slugs in the path.

Walking back into town, I stopped in at the 14th-century Notre Dame du Bout du Pont (The Church of Our Lady at the End of the Bridge), now known as Iglesia de la Asunción.  I had the church to myself and lit a candle to ask for blessings for my pilgrimage and for my family and then for each of my children individually.  I asked for guidance for them, and for protection and self-fulfillment. I felt awed by the task ahead of me: to walk 790 kilometers, or 490 miles, across Spain to Santiago de Compostela. By the time I left the church, I felt assured I wouldn’t be alone on my journey, and it humbled me.

I took a stroll through the Porte Notre Dame, through which I’d pass when I began my walk on Tuesday, and across the Pont d’Eyheraberry, where the Nive River mirrored the old stone buildings on its shores.

I continued out Porte D’Espagne, at the opposite end of town from Port St. Jacques; the road from this gate leads up into the Pyrenees.  I checked out my route for Tuesday morning on the Route de Napoléon (25.1km to Roncesvalles).  I’d be stopping 8km up the mountains at Orisson.

While enjoying a lunch of an omelette fromage and vin blanc at an outdoor cafe on the main road, I wrote postcards to my husband and children, mailing them from the local post office.

When I returned to Beilari, I found Ingrid, who I’d met yesterday on the train, standing outside the albergue, which didn’t open until 2:30. She was talking to two lively fellows, Newton from Brazil and Mike, originally from South Africa but most recently from California.  We had an intense but agreeable conversation bemoaning the current U.S. president. It was a thorough Trump-bashing, peppered with laughs and plenty of indignation.

Once Beilari opened its doors, Ingrid settled in, and I sat on the patio with a beer, writing in my journal. I felt a bit lost as all the pilgrims I’d met last night had taken off.  I wondered if I’d ever see them again. Ingrid joined me on the patio after she’d settled in, and we talked of Archie Bunker-type fathers, gay siblings, the president and his daily outrages, her involvement in the Unitarian Church and Habitat for Humanity, her job as a journalist and photographer, my stints teaching abroad and my blogging. We talked about our families and our pilgrimage and the next day’s walk.  She had trained quite rigorously in Colorado at high elevations over the summer, and felt strong and ready to begin her pilgrimage. I remained wary of my knee and wondered how it would hold up.

Beilari doesn’t have Wi-fi; they encourage people to talk to each other.  Some of us congregated in front of the Pilgrim Office across the street, trying to use their Wi-fi signal.  Ingrid asked if I’d reserved a room at the monastery in Roncesvalles.  I hadn’t so I checked online to try to reserve.  Surprisingly, I found it was full for Wednesday night, when I’d arrive there.  That made me nervous, so I reserved a room two towns further along, in Espinal.  As I became increasingly nervous about making it over the Pyrenees the first two days, and even adding another 6.7 km to Espinal, I decided I’d use Express Bourricot to send my backpack ahead in two stages, first to Orisson and then to Espinal. I would carry a simple day pack.

At apertivo, we went through the same routine from the night before: tossing the invisible ball, the sharing, the toasts.  At dinner, two tables of pilgrims shared a meal of white bean soup, salad topped with hard boiled eggs and carrots, ratatouille on rice, and chocolate mousse. It was a crowd of different nationalities and languages, making it hard to connect.  Paõ from Barcelona, who later slept in a bunk in my room, played a ukelele while pilgrims danced to his “La Bamba.”  Suddenly it was 10:30 and lights out.

Anxious about my first day of walking, I had a restless night, worrying about the Pyrenees. Could I make the entire pilgrimage?  Could I connect with people?  Could I, by some miracle, discover the art of living? 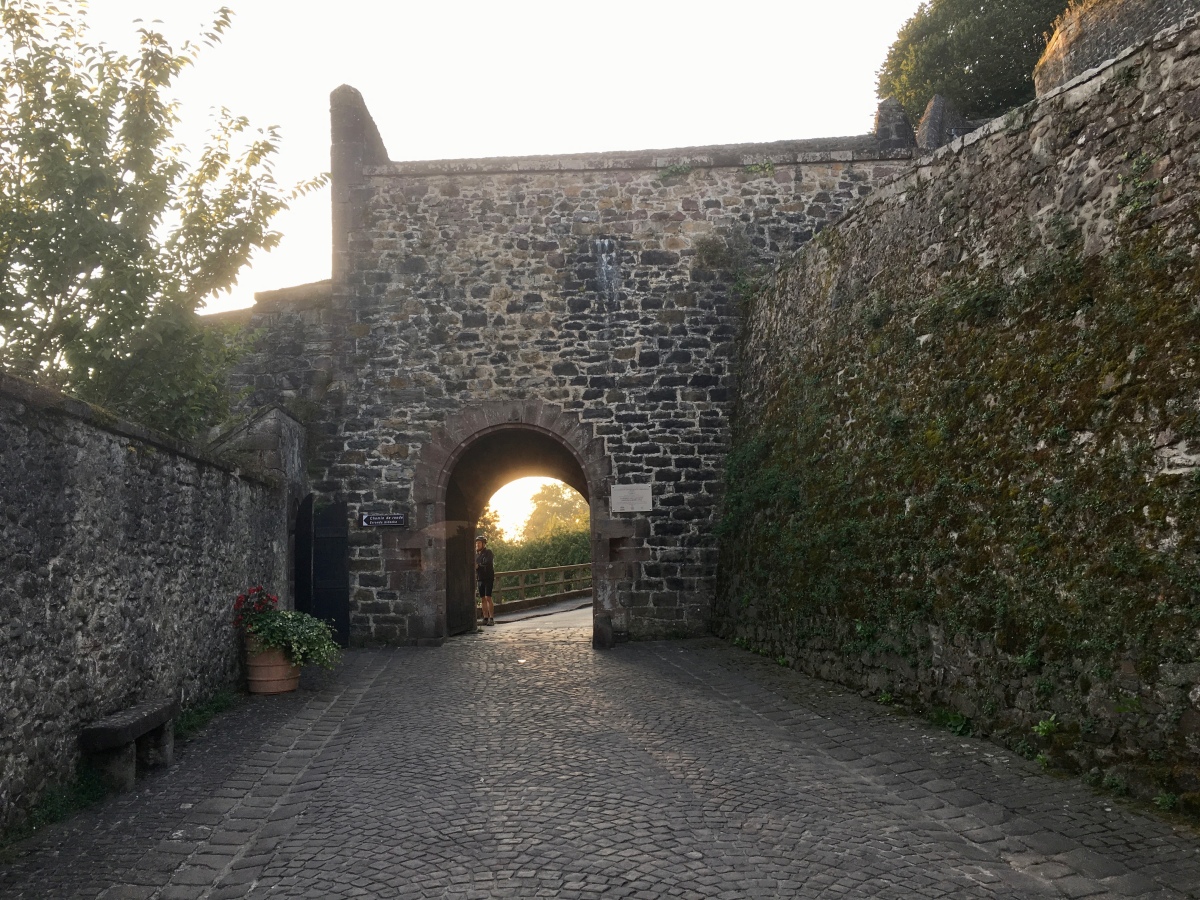 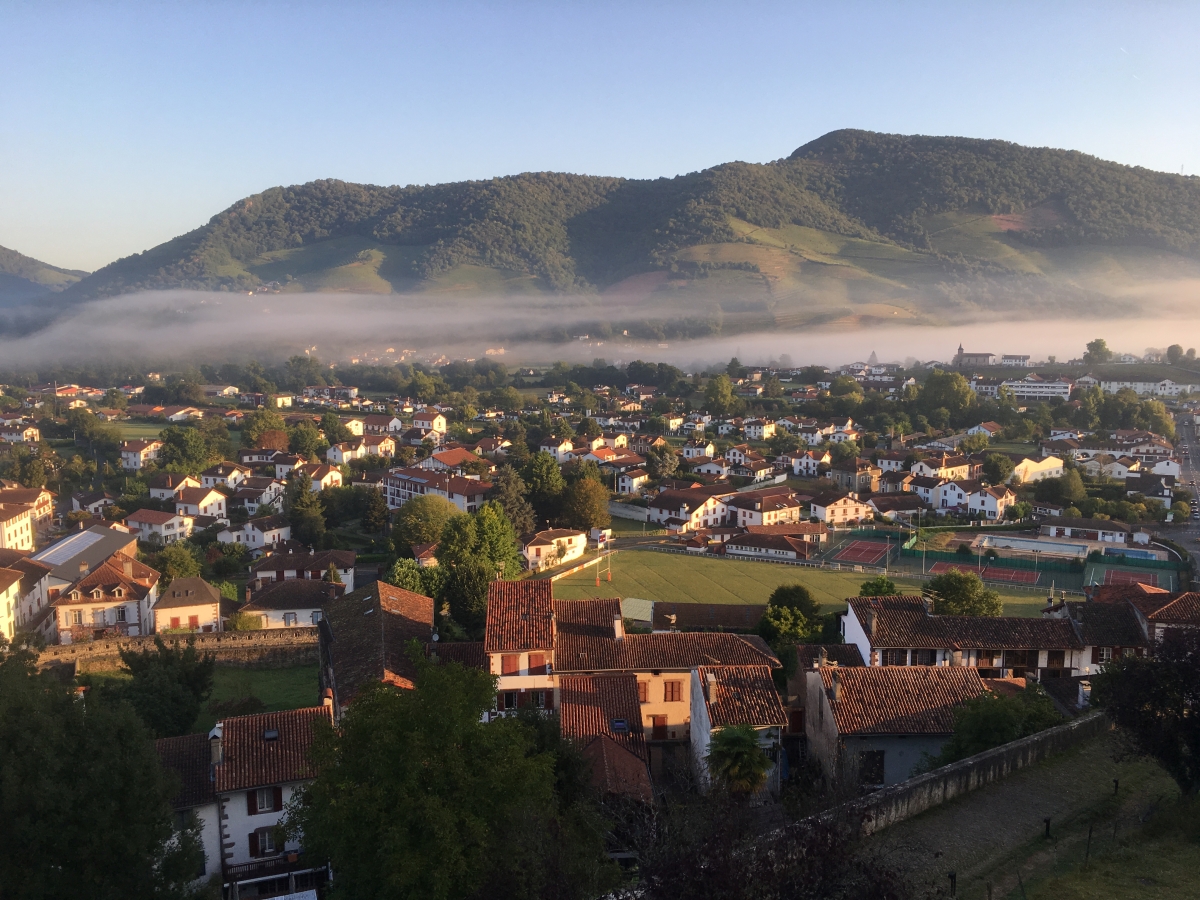 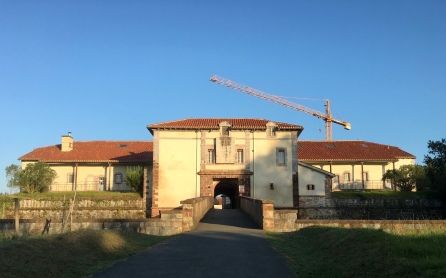 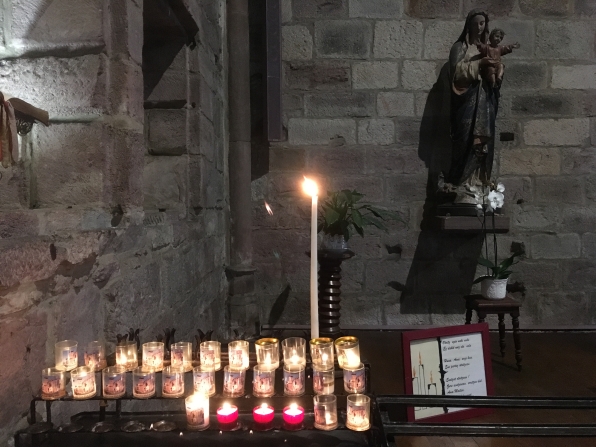 I loved the bridge over the Nive River. 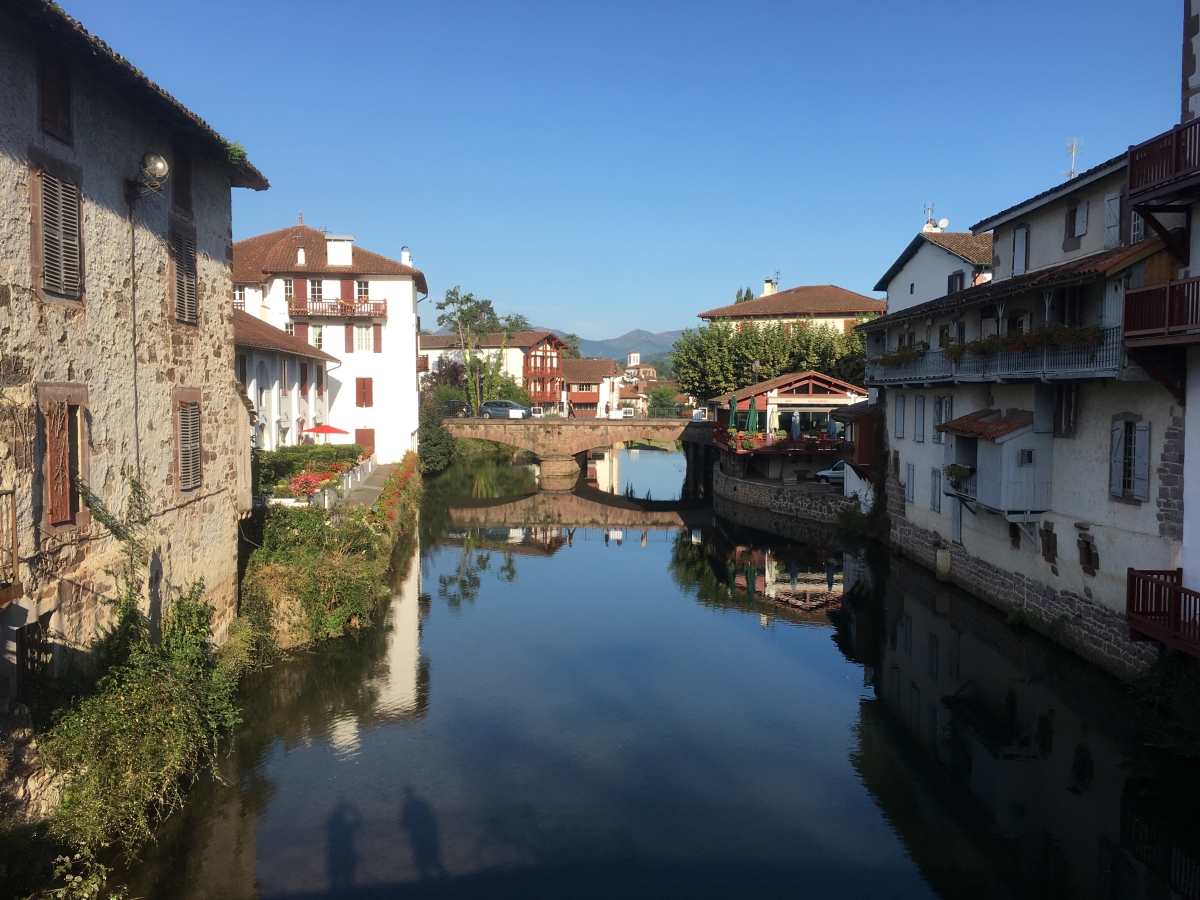 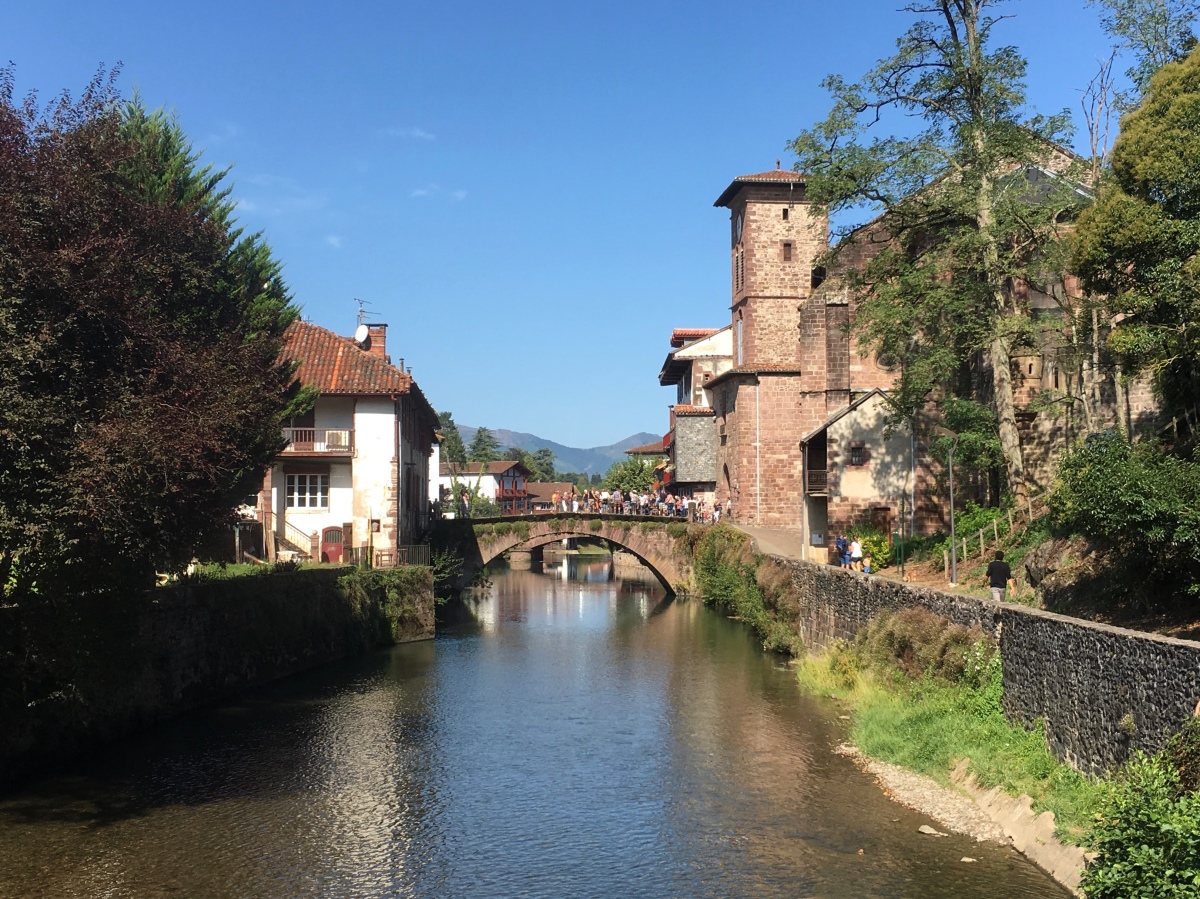 Pont d’Eyheraberry over the Nive River 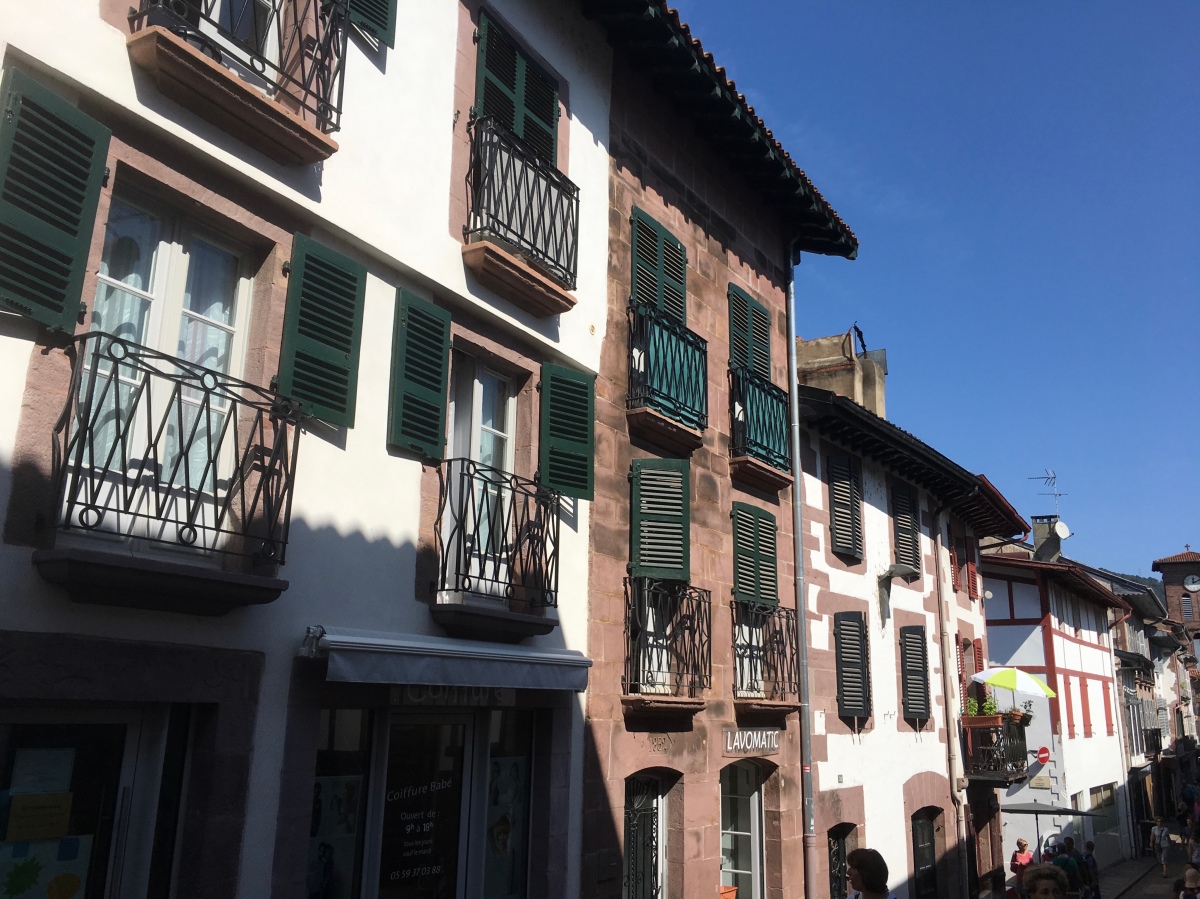 The Notre-Dame gateway, the Porte Notre-Dame, is the best preserved of the gateways to the town. 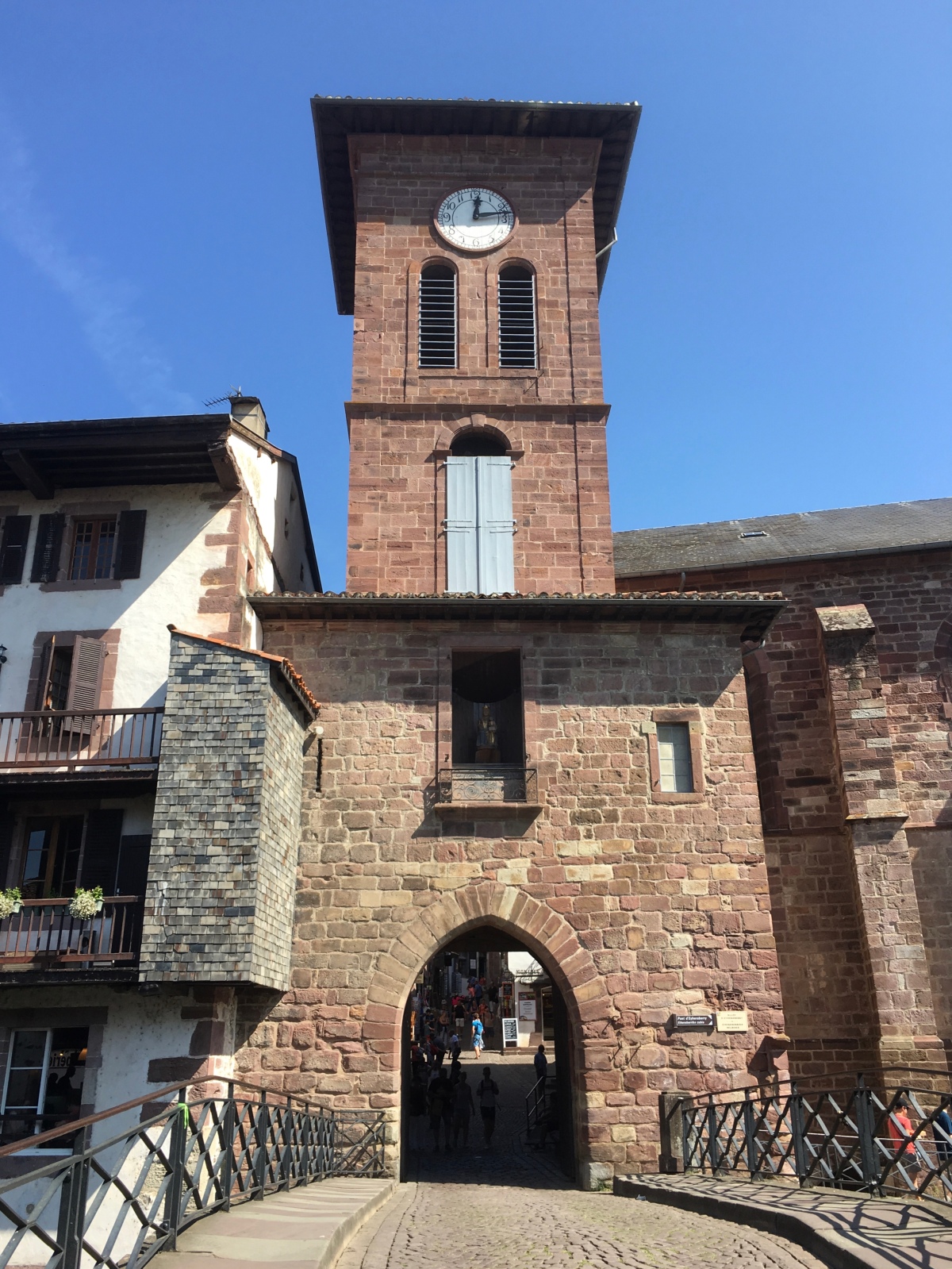 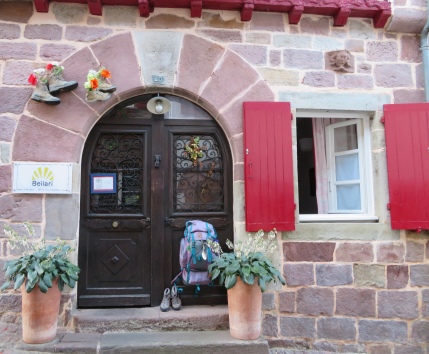 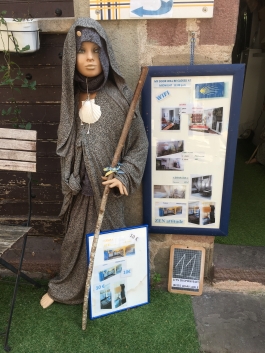 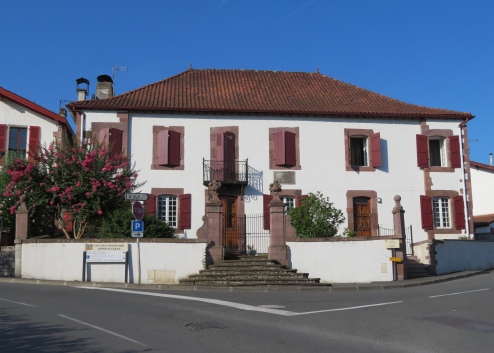 Orisson to the left &

A lively market offered enticing seafood, cheeses and wines outside the town walls. 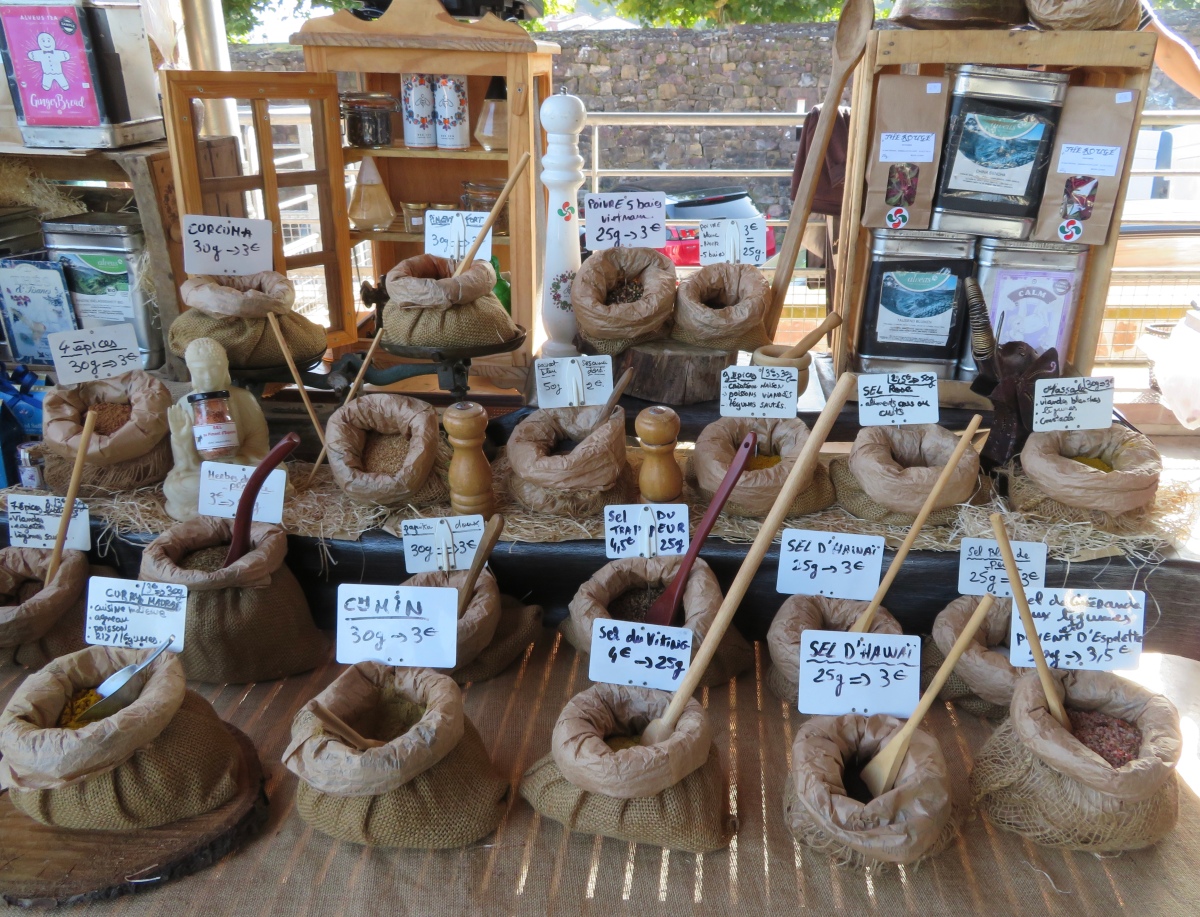 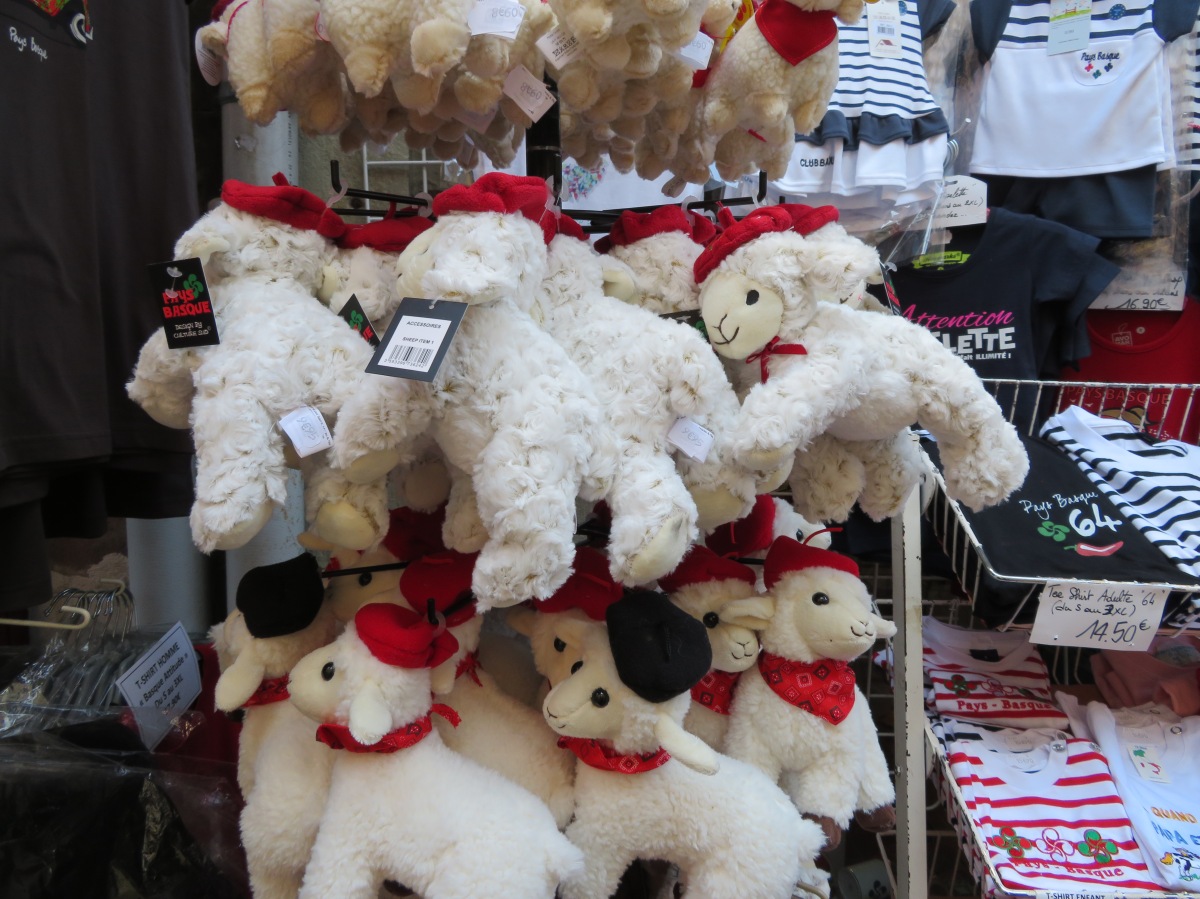 sheep at the market

Another Roman bridge sits in a wooded area south of the Pont d’Eyheraberry over the Nive River. 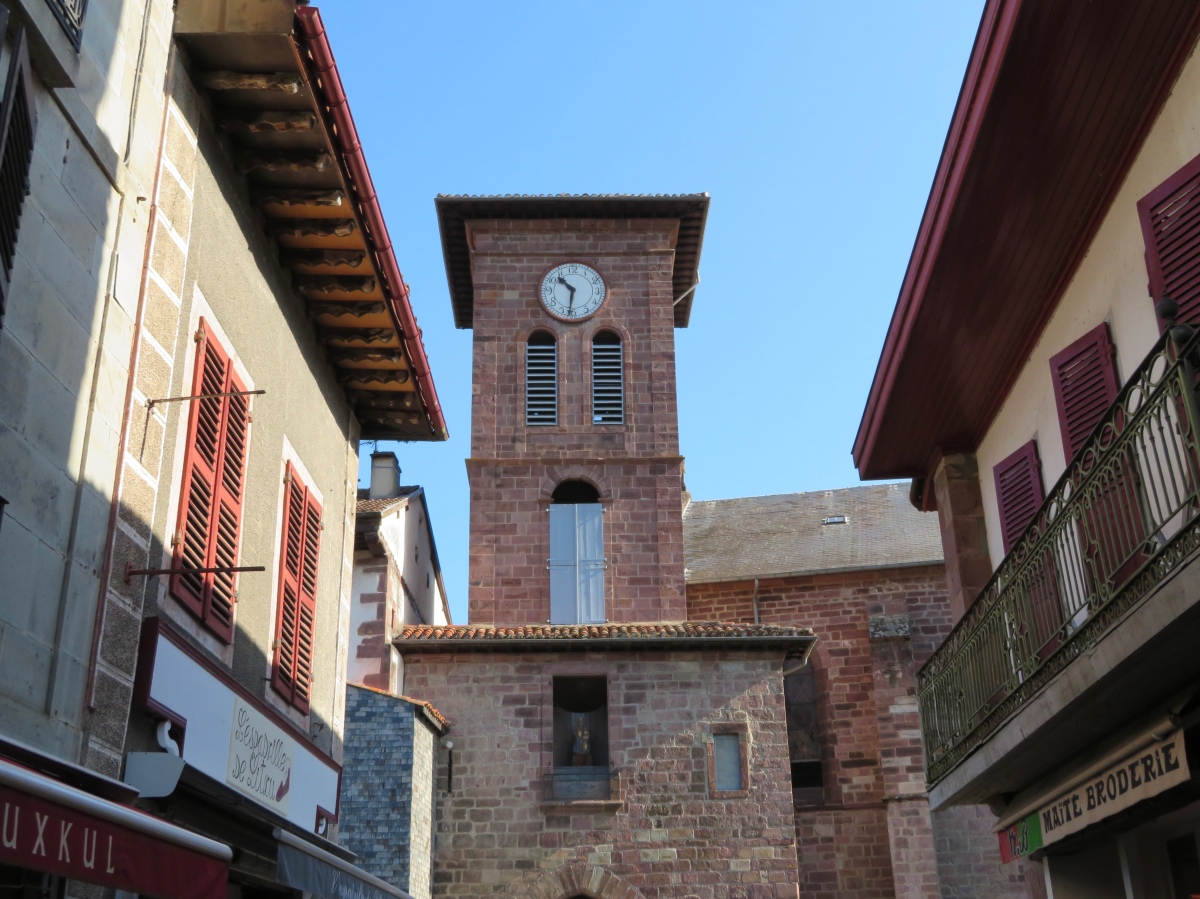 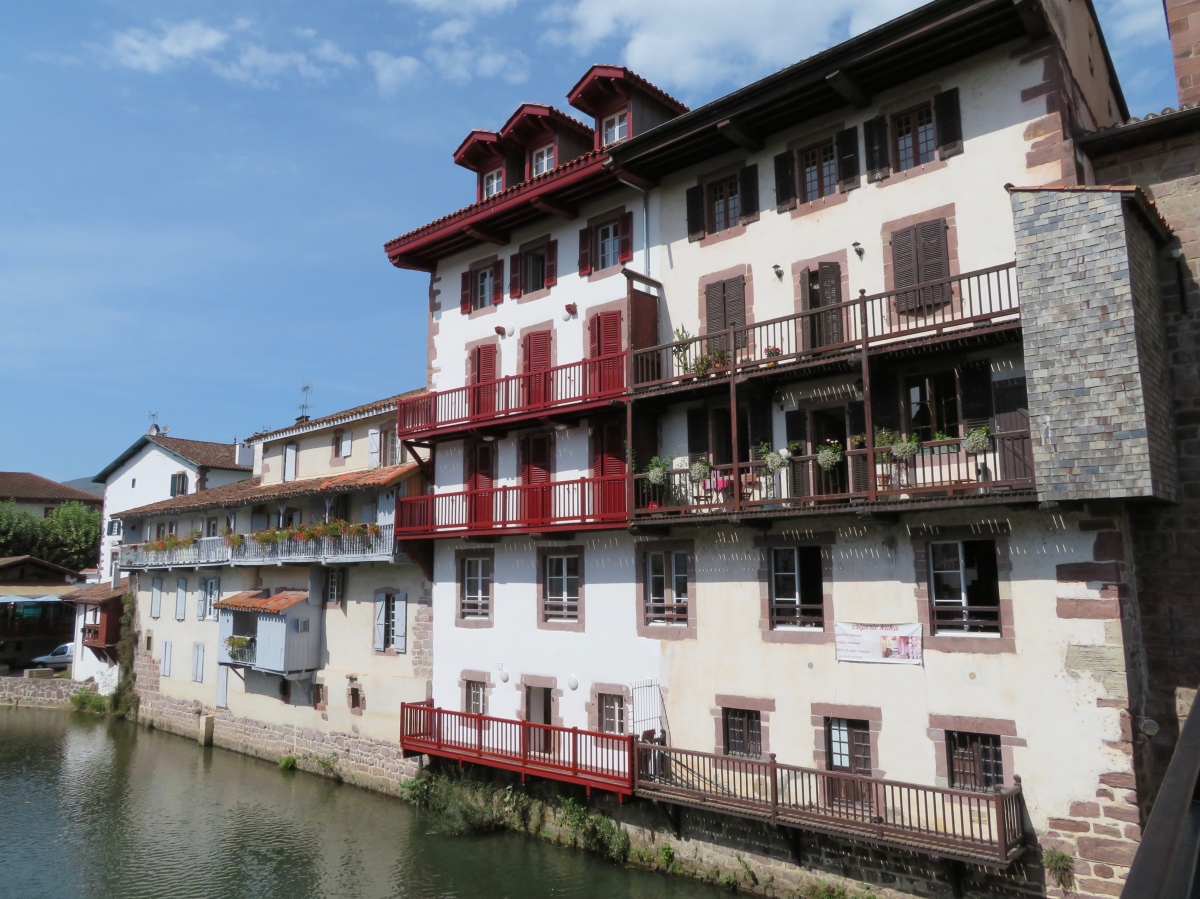 Houses on the Nive River 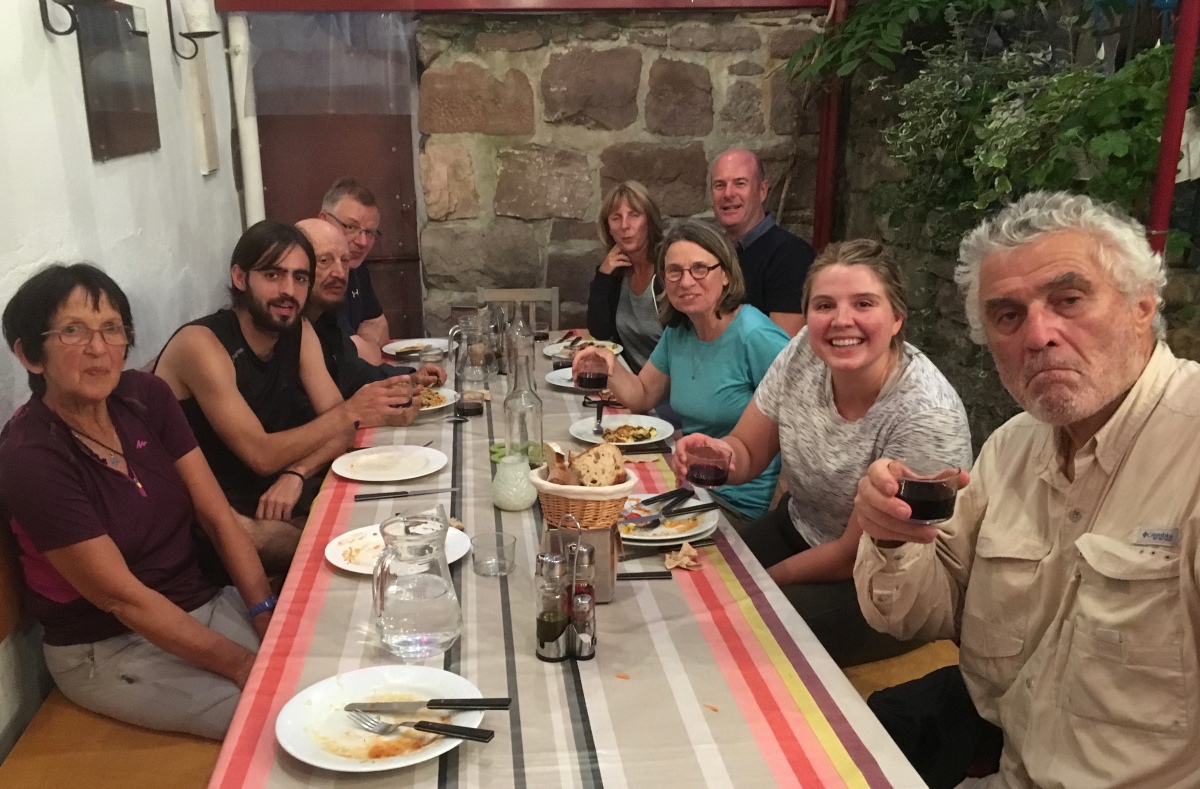 on journey: launching my camino

“PROSE” INVITATION: I invite you to write up to a post on your own blog about a recently visited particular destination (not journeys in general). Concentrate on any intention you set for your prose.  In this case, one of my intentions for my Camino was to write using all my senses to describe place and to capture snippets of meaningful conversations with other pilgrims.

Include the link in the comments below by Monday, December 24 at 1:00 p.m. EST.  When I write my post in response to this invitation on Tuesday, December 25, I’ll include your links in that post.