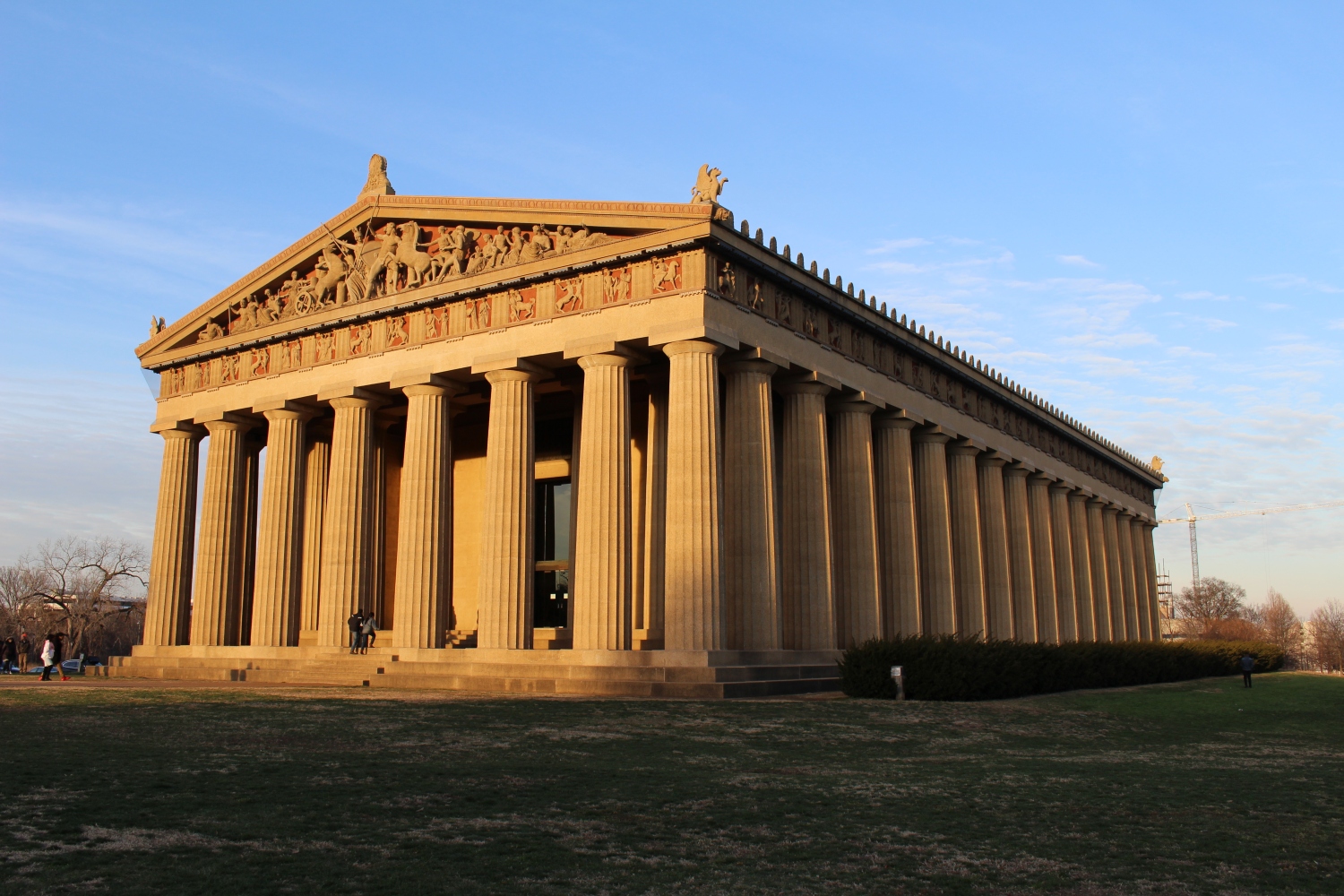 In anticipation of our trip to Nashville at the end of last December, I first bought Moon Tennessee by Margaret Littman, so I could read about the city.  All I knew is I wanted to find Parnassus Books; I also figured country music would be involved, but other than that, I had no idea what the city had to offer.

As I started reading, I made a list of places to see and things to do:

Later, I read about Nashville in a book about road trips called Wanderful: The Modern Bohemian’s Guide to Traveling in Style by Andi Eaton, where I found out about the Murals of 12 South and “gas-stations-turned modern-shop” such as White’s Mercantile and Imogene & Willie, as well as Reese Witherspoon’s Draper James boutique. We found that the Old Crow Medicine Show was playing at the Grand Old Opry, but tickets were sold out.  We’d have to find some other music venues.

Watching an Anthony Bourdain episode about Nashville, we figured we should seek out Nashville Hot Chicken, chicken marinated in a water-based blend of seasoning, floured, fried, drenched in a cayenne pepper paste, and served on white bread with pickle chips. It sounded good but highly decadent and super spicy!

My novel of choice was Whistling Past the Graveyard by Susan Crandall. It turned out only a small part of the book was set in Nashville; most was set in Mississippi in the summer of 1963, when the civil rights movement was underway. I was caught right away by the southern twang and dialect of the narrator, 9-year-old Starla Claudelle:

“I shoved the Frosted Flakes in my mouth to keep all the words spinning around in my head from shootin’ out.”

“I leaned so I could see into the kitchen. I was so low, I saw mostly legs. Miss Cyrena’s knee was jumpin’ like a jackhammer. I knew how she felt, all jittered up inside and no place to put the aggravation. Happened to me a lot.”

Red-headed Starla is as feisty as they come. She runs away from home to escape her mean-spirited paternal grandmother, Mamie, and to reunite with her mother who left her years before to make it big as a country singer in Nashville. She has delusions that her family will be reunited and all will be well again. On the way she meets a kind-hearted but meek African-American woman, Eula, who has absconded with a white baby she found on some church steps. A lot of adventures and misadventures occur, many of which are related to racism and race issues in the deep south. Little Starla learns over the course of the story how horrible the situation is for African-Americans in the south, and her “red-hot” temper often flares in the face of it.

If I had taken more time to find other books, I might have also discovered:

The most exciting thing I did was create a playlist for our 10-hour drive on Spotify: Highway to Nashville.  My top five favorites from this playlist of 92 songs are:

As I prepared this playlist, I started to get an inkling of why country music is so much fun!

Of course, I also prepared my journal and my intentions. I think I got a little too ambitious for this trip! 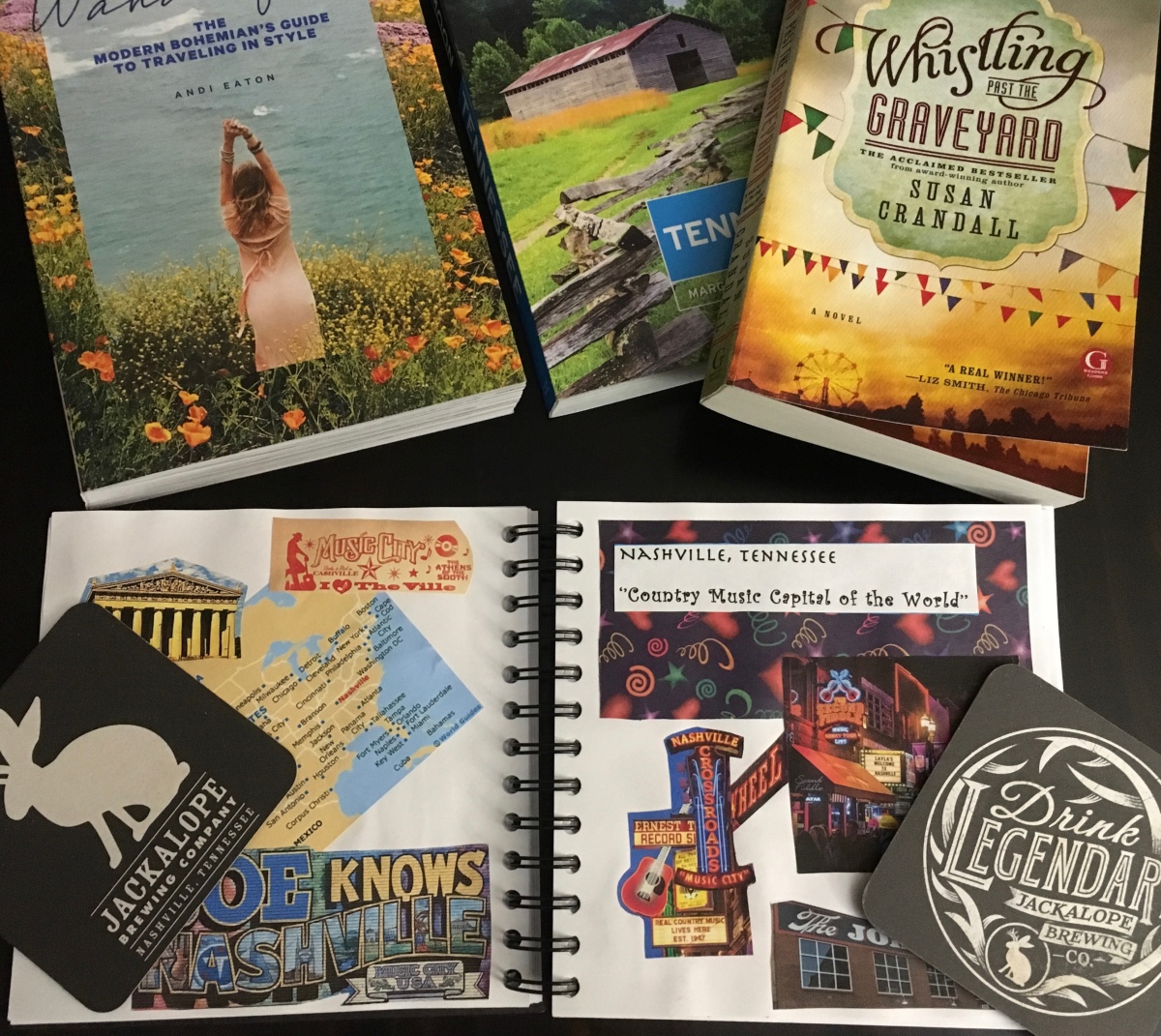 My journal and inspiring books

With all my reading, journal-preparing, playlist-making and intention-setting, I was very excited about Nashville by the time we left home on Wednesday, December 27!

“ANTICIPATION & PREPARATION” INVITATION: I invite you to write a 750-word (or less) post on your own blog about anticipation & preparation for a recently visited or a future particular destination (not journeys in general). If you don’t have a blog, I invite you to write in the comments. Include the link in the comments below by Thursday, April 12 at 1:00 p.m. EST.  When I write my post in response to this challenge on Friday, April 13, I’ll include your links in that post. My next post will be about Pittsburgh, Pennsylvania. 🙂

This will be an ongoing invitation, once weekly and then bi-weekly through April, and monthly after that. Feel free to jump in at any time. 🙂  If you’d like to read more about the topic, see: journeys: anticipation & preparation.

I invite you all to settle in and read posts from our wandering community. We only have one this time. I promise, you’ll be inspired!

Thanks to all of you who wrote posts about anticipation and preparation. 🙂

It does not matter, sunrise or sunset, just have fun in between

Now, Here and Somewhere else

Teach ESL and Travel the World