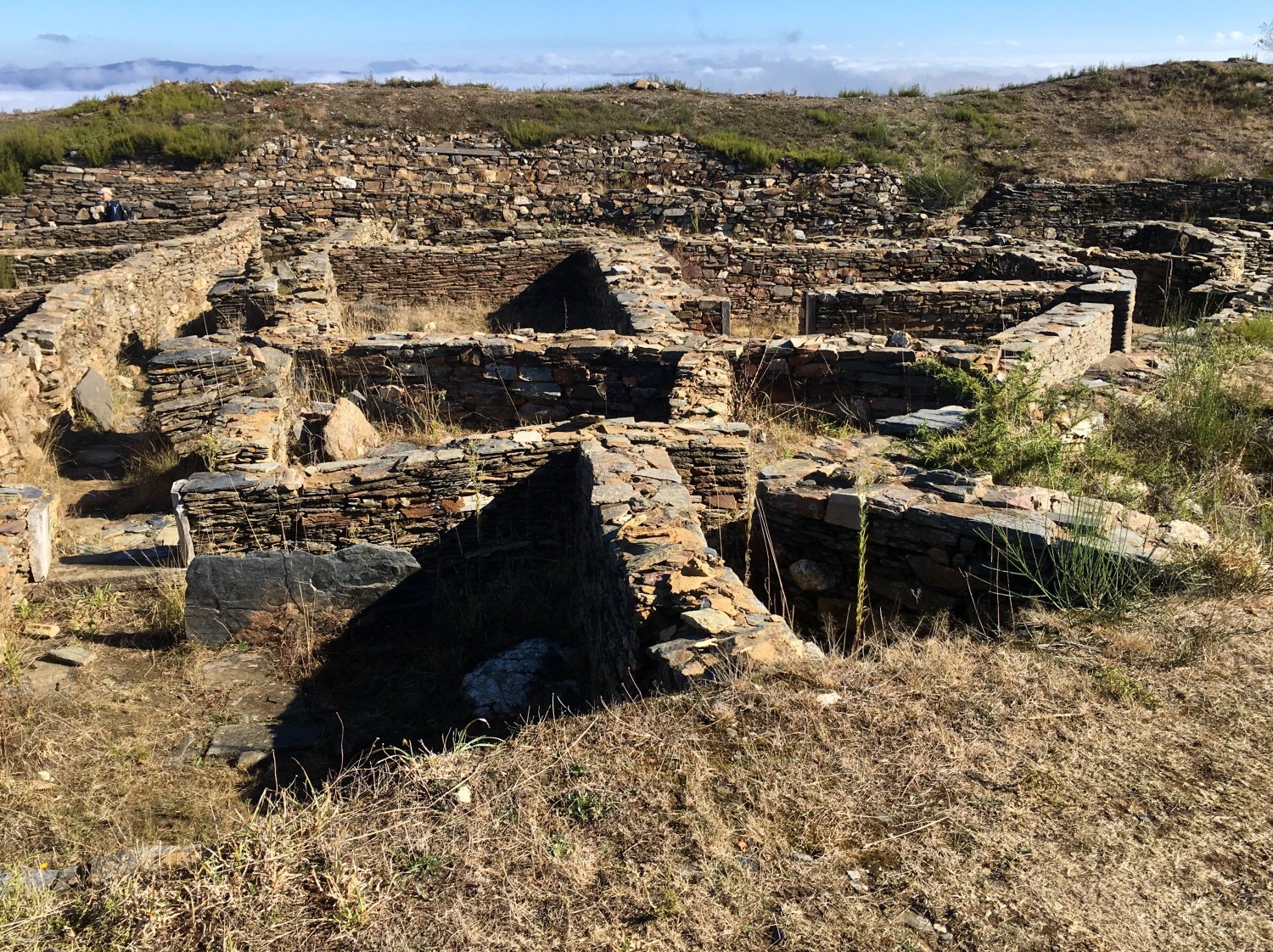 I got a late start, at 8:50 a.m., leaving Portomarín on a reddish dirt path in the fog with Darina, who I met at a cafe in town. We crossed a small bridge over the río Torres, and then up through a dense woodland lined with heather and gorse.  Since we were climbing, she soon left me behind.

The Spanish school kids swarmed around me, but I slowed to let them go past. Sunshine was in the forecast, but the fog didn’t burn off until 11:00.  I went through more forests, a long stretch of roadside walls past huge industrial complexes – an abandoned Fabrica and Aviporto fertilizer pant in Toxibó. Then again through pine forests with no sight or sound of traffic. There was a lot more climbing, 7.7 km to Gonzar, where enormous oaks stand sentry at the entrance to town. I had some potatoes bravas at café Descanso Peregrino, which was very busy.  There was a long line to the restroom.

According to The Pilgrimage Road to Santiago by David M. Gitlitz and Linda Kay Davison, today’s stretch of the Way was “famous as an open-air brothel.” 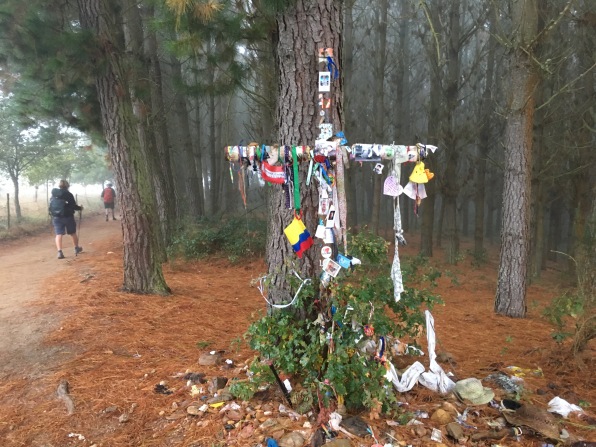 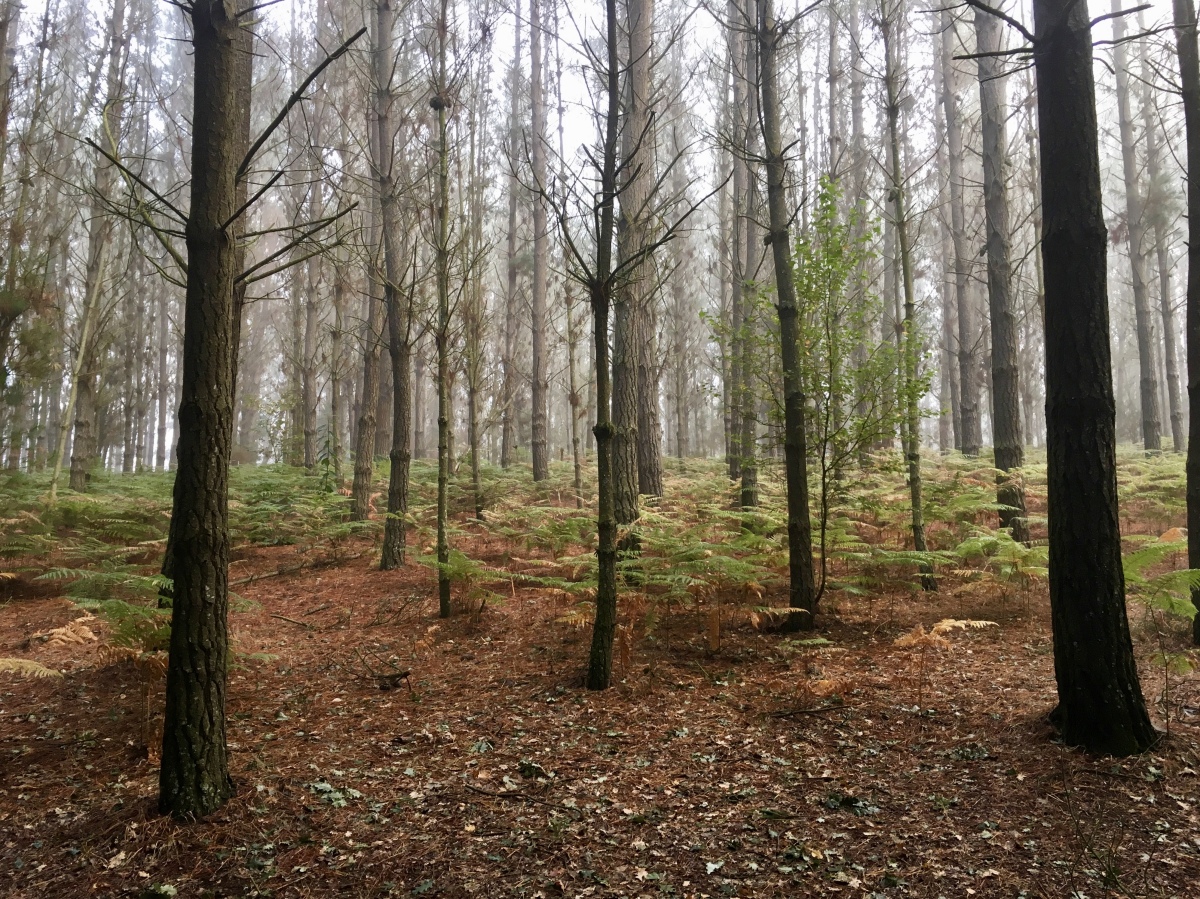 The route out of Gonzar was easy. I stopped at Café O Castro in Castromaior for a cafe con leche and a KitKat bar, mainly so I could use the bathroom. The woman who ran the cafe had cute painted stones displayed: houses, cacti, a frog.  A glossy German shepherd sprawled in front of the café. I passed by the Romanesque church of Santa María and then continued through the village.

It was a steep climb to the first cluster of eucalyptuses in Castromaior.  This native Australian tree would appear without interruption from here on, as it had been planted to supply the paper industry.  Here I stopped to see the ancient ruins of the 4th century B.C. Castro de Castromaior, an ancient archeological site inhabited from the 4th century B.C. to 1 A.D.  Ruins consisted of vegetable houses and a strong house from the beginning of the Roman conquest.

I ran into Darina at the ruins and we explored together. I was annoyed by a young woman doing yoga on the ruins.  I felt it was so selfish because she was in everyone’s photos.  There were beautiful views of the surrounding countryside. 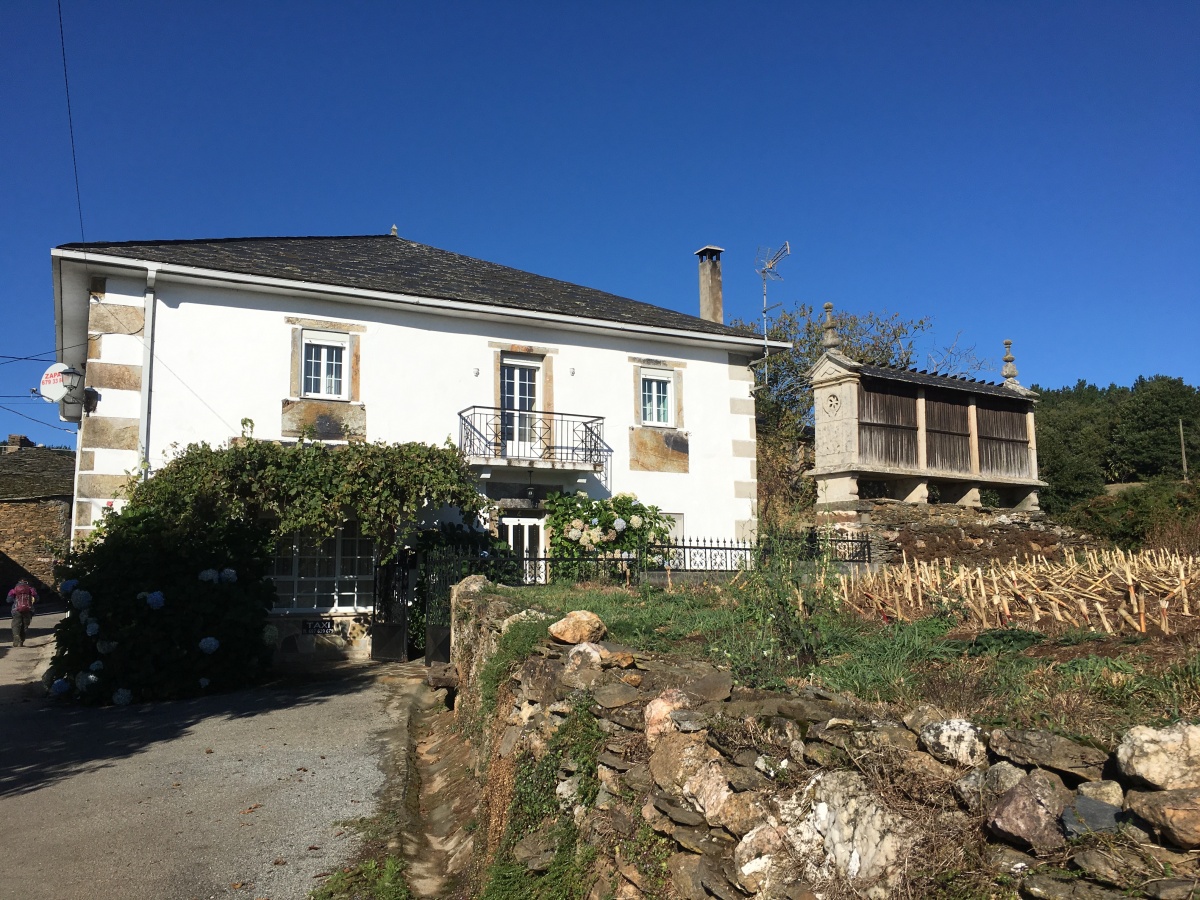 Church of Santa María in Castromaior 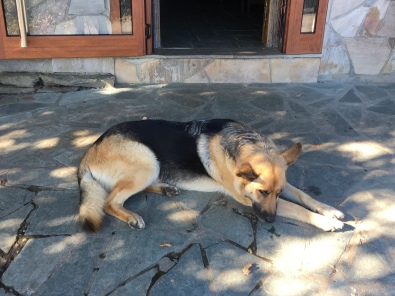 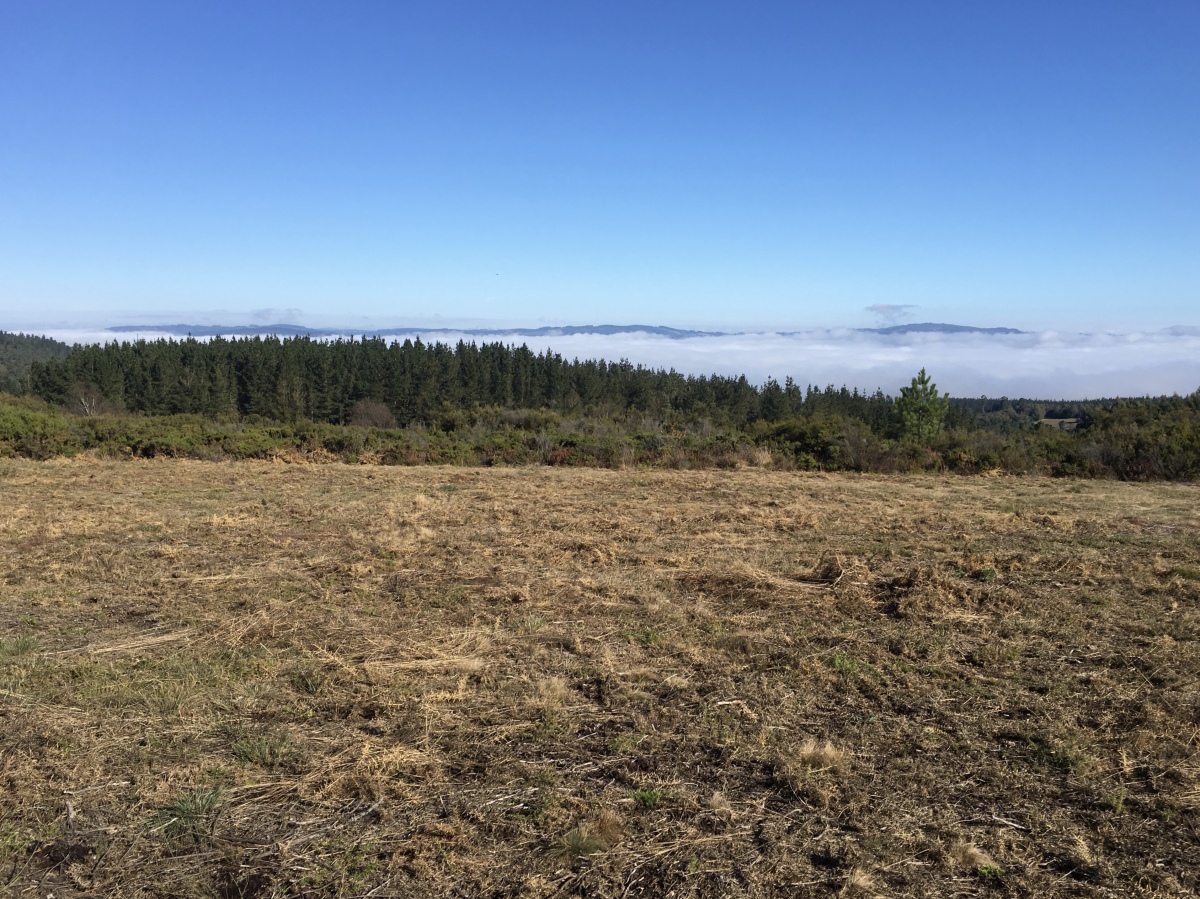 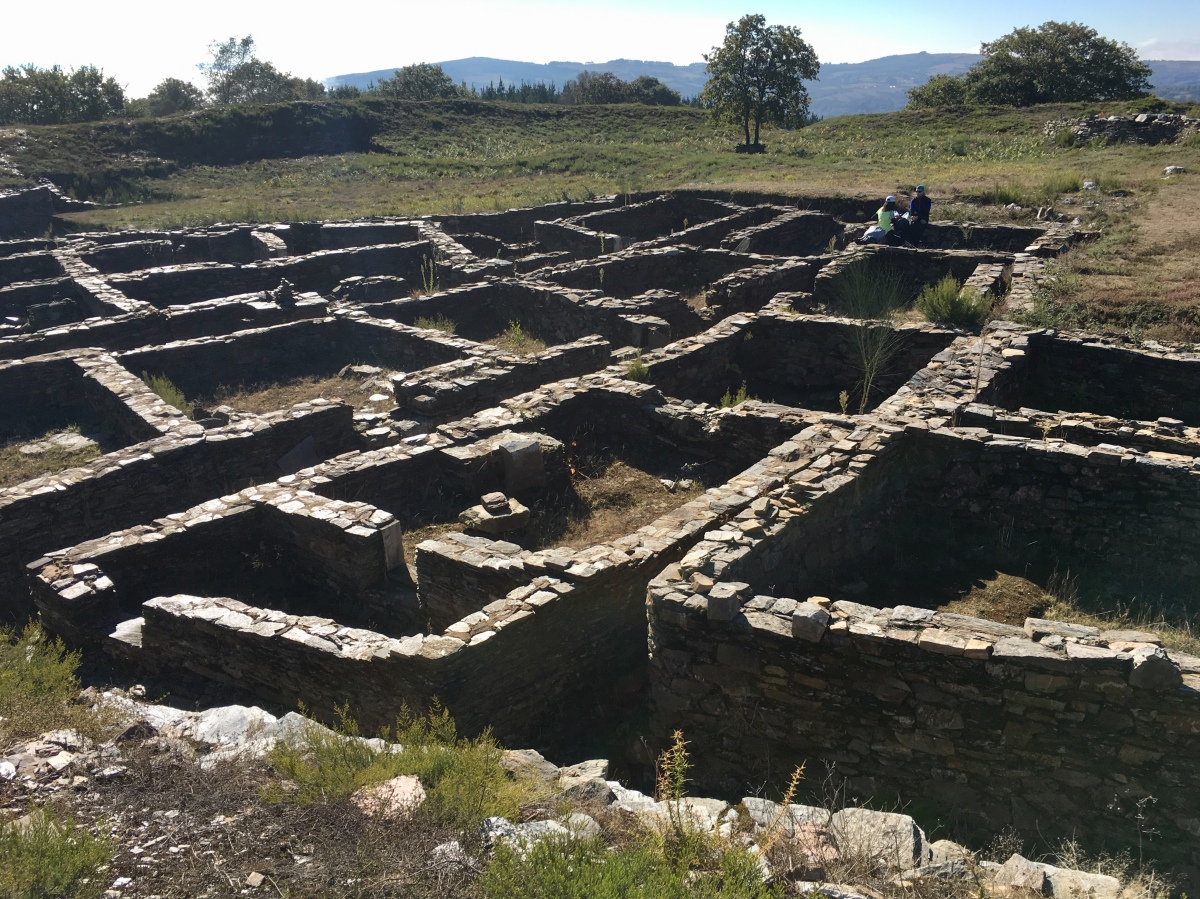 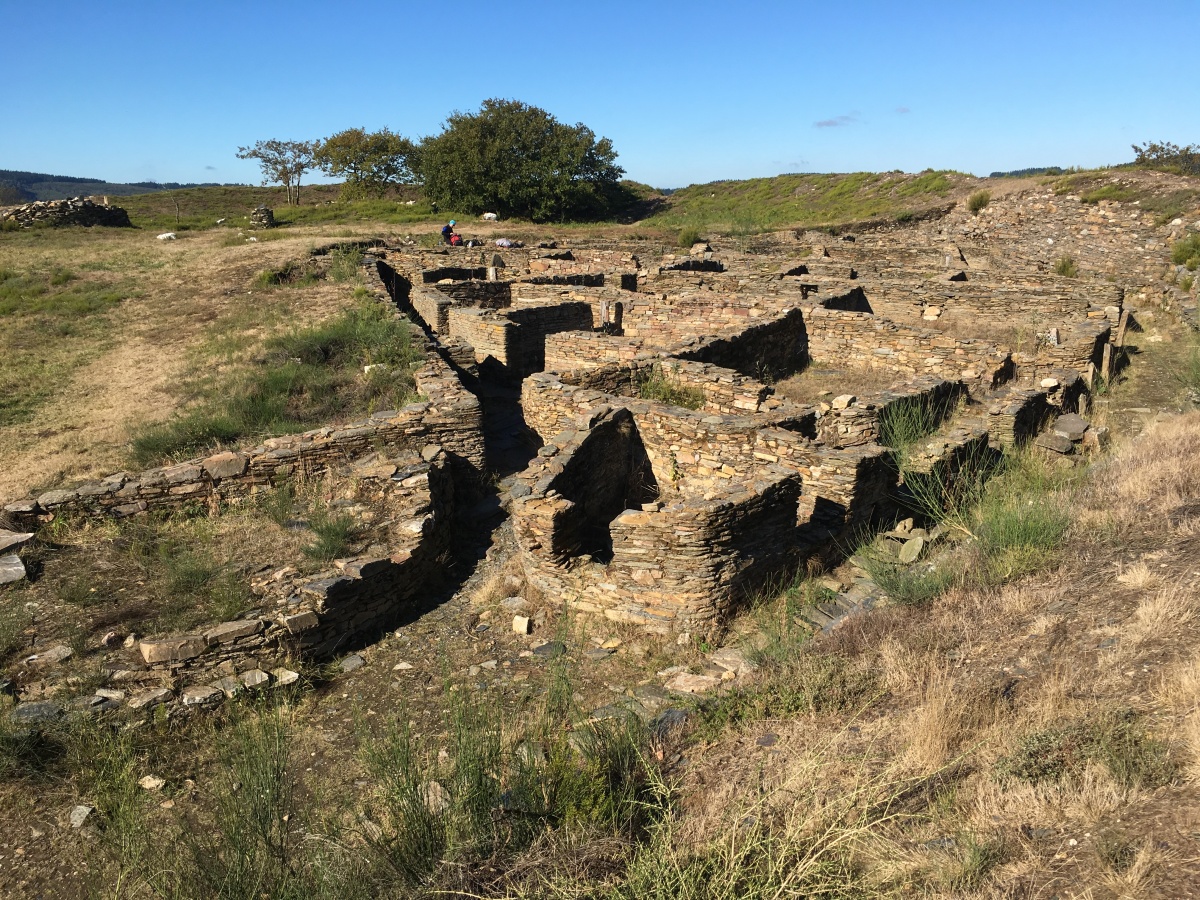 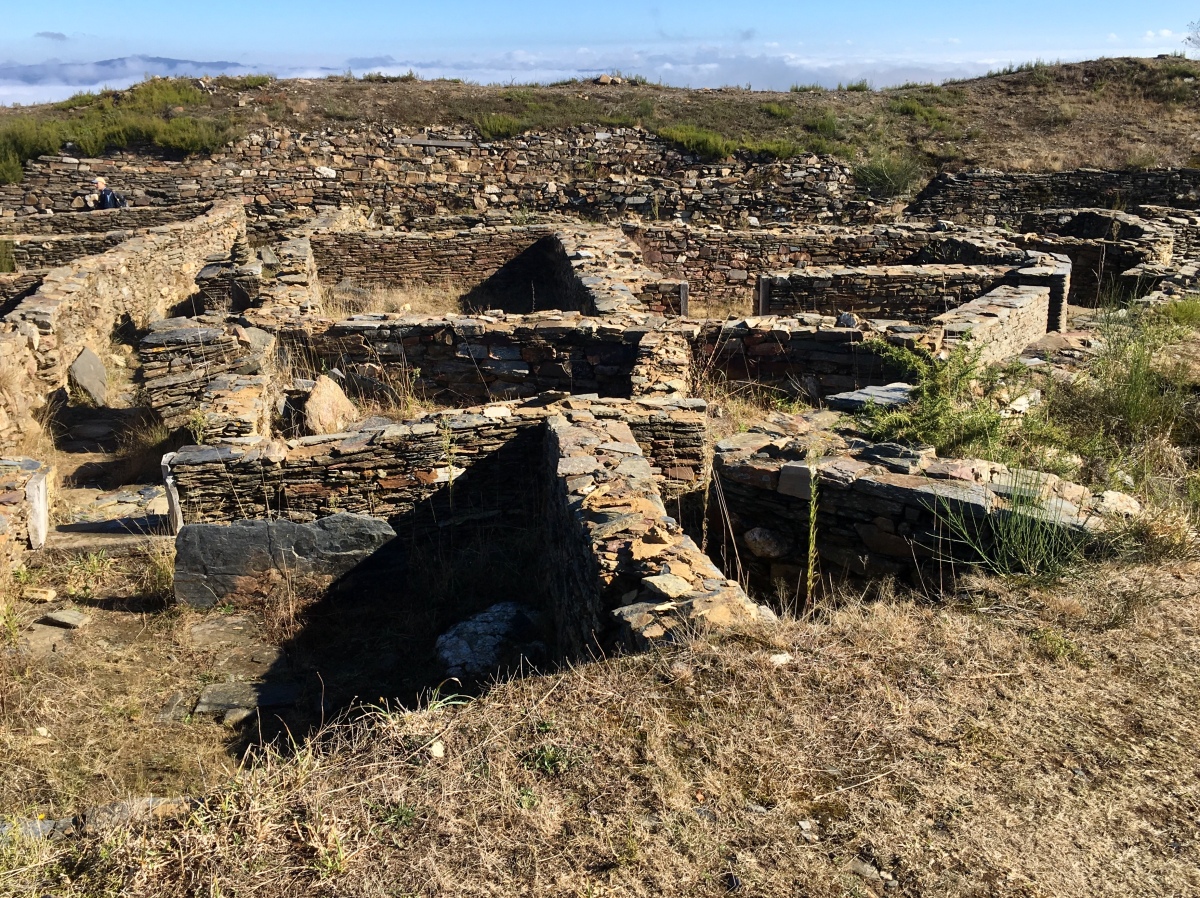 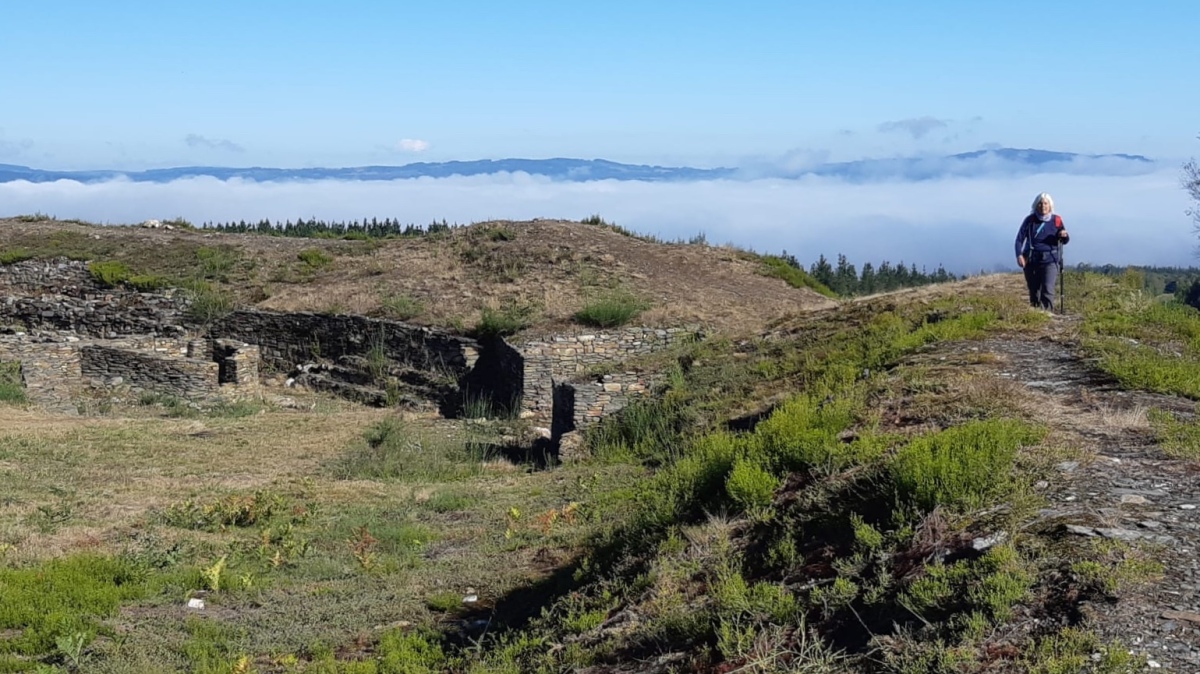 me at Castro de Castromaior (photo by Darina)

me at Castro de Castromaior

From Castromaior, I walked through Hospital de la Cruz where the N-540 cuts through the ancient village.  It takes its name from an old pilgrim’s hospice, which still stands.

It was a stony and rather uncomfortable walkway leading steeply upward to Ventas de Narón.  There, I stopped at the tiny Romanesque Capela da Magdalena, a former hospital of the Knights Templar built in the last third of the 13th century.  Its emblematic stamp is available from a blind custodian. The area was the scene of a fierce battle in 820 between Moors and Christians. When the Knights Templar disappeared, the hospital fell in the hands of the Benedictine order.

At Ventas de Narón, I ran into Sheryl, Sharon and John who said they were staying there.  Sheryl said they were walking 16 miles on average each day.  I said, “You mean 16 kilometers?” She said, “No, 16 miles.” She was clueless.  She had been on an even keel with me since the Meseta and I rarely walked 16 miles, walking most often 16-20 kilometers (10-12 miles), more or less. Sharon had organized everything for her and she never knew where she was going the next day, or where she’d come from, or how far she’d walked. Honestly, up until that point, I’d never seen her walking at all; I always saw her sitting in cafés in towns! Darina and I got a laugh when we discovered we’d both only seen her in towns.

I also ran into Ellen from Germany several times today, but I didn’t feel like bothering to talk to her.

I climbed the Sierra Ligonde to the highest point of today’s route (756 m), passing dog kennels (perreras Alejo) before dropping down to the ancient hamlet of Lameiros right before Ligonde.  There I found Darina at a cafe, where we enjoyed a Peregrino beer and a veggie, asparagus and queso sandwich.  Darina and I walked together through Ligonde where we admired the ancient hamlet and its Cementerio de Peregrinos. Ligonde was formerly an important medieval stop on the way.  Charlemagne was said to have stayed here, along with other royals. It also had a pilgrim hospice. 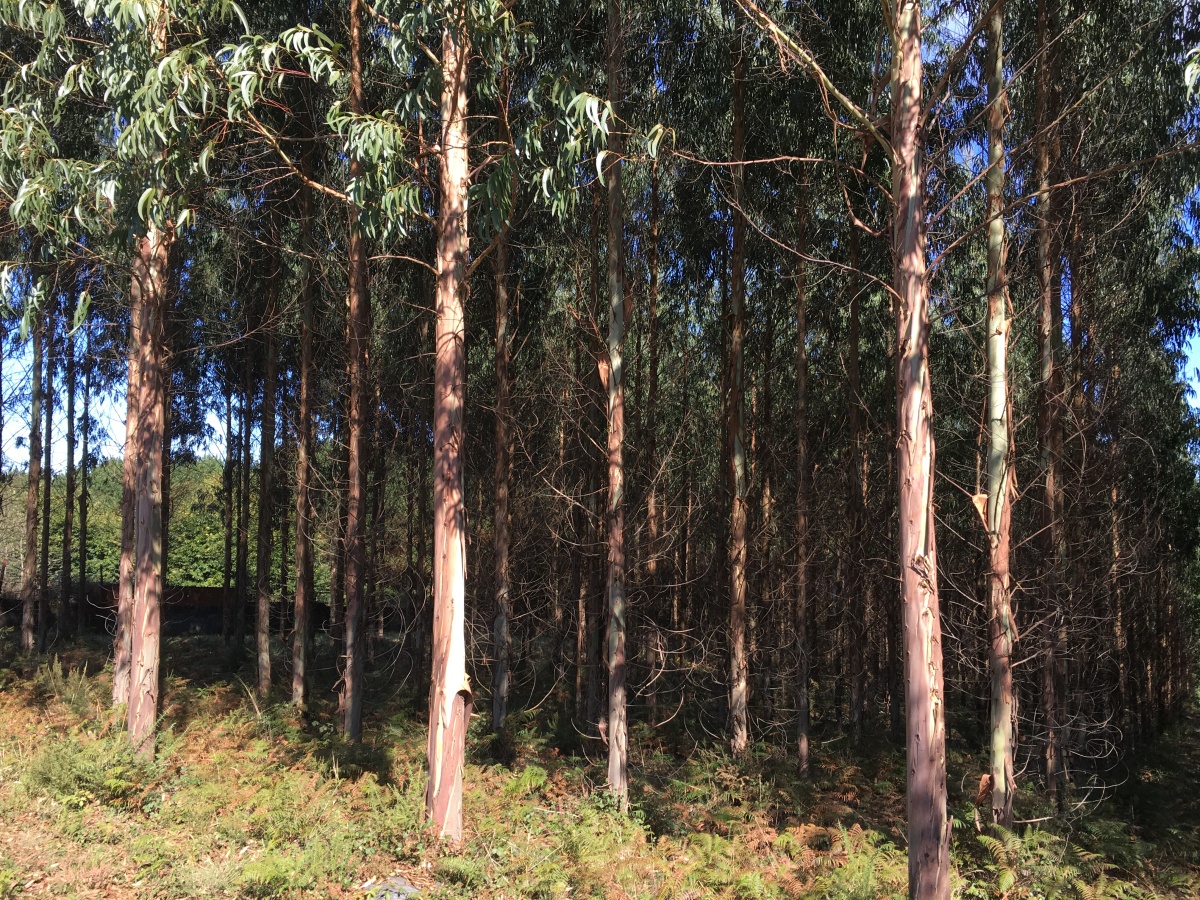 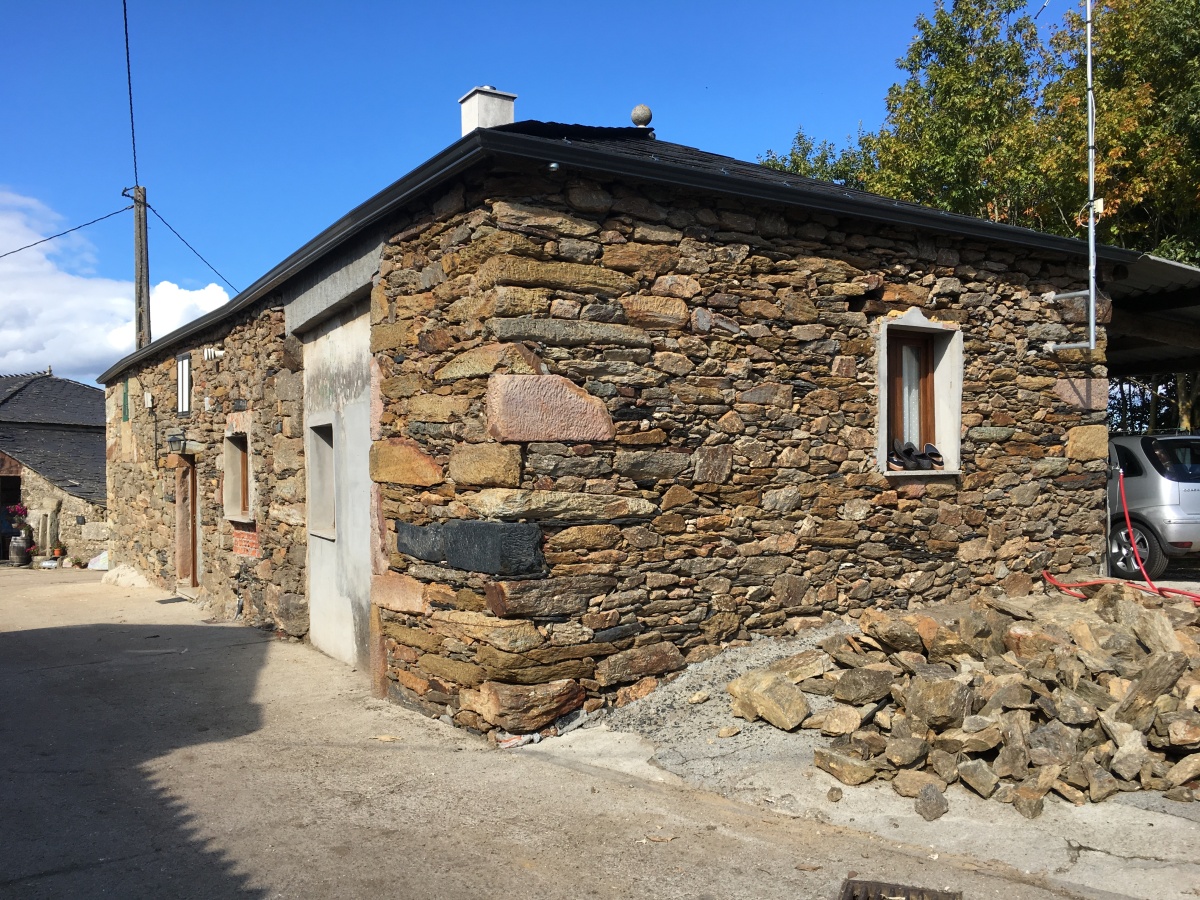 Finally, we continued on through Eirexe (which means “church”), passing a 17th-century wayside cross sheltered by a gnarly oak tree in the ancient hamlet of Lameiros. The worn base bears death symbols, while the figure of the Virgin de los Dolores refers to maternity and the creation of life. Pilgrims leave painted stones and pieces of paper bearing messages, which eventually wash away.

We walked on through more eucalyptus groves, mixed with oak and beech, past A Calzada to the tiny hamlet of Lestedo and to my hotel, Hosteria Calixtino, arriving at 4:30.  Darina planned to stop further on, so we parted ways.

I showered and did laundry and then ate dinner at 6:30: red wine, ten giant prawns, and pineapple cake.  It was delicious!  There was a tour group here of fourteen people; someone named Sonia asked if I wanted to join them for dinner but I didn’t want the pilgrim menu and I was too hungry to wait until 7:30.  I asked them where they’d walked from today and they didn’t know.  Those were the tour group pilgrims for you. 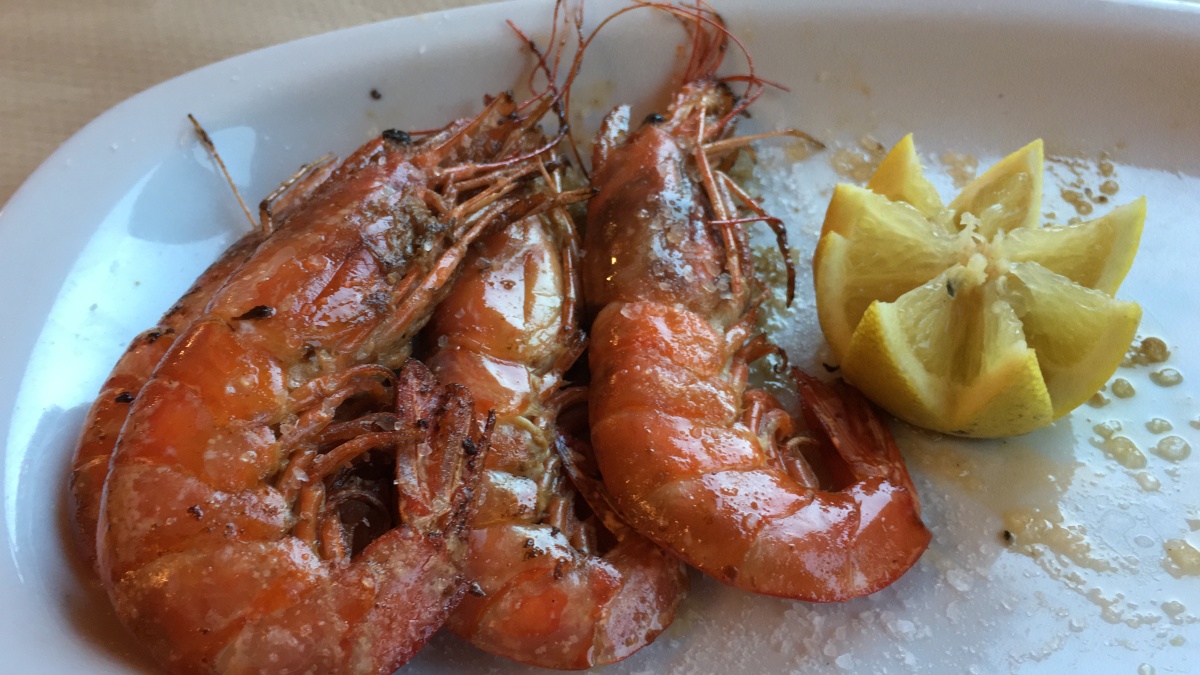 In my hotel room, I saw a big cockroach-like bug crawling across the floor.  I tried to smash it with my sandal and thought I got it, but it rousted and scurried away.  All night, I worried about it getting in my bed!  Talk about bed bugs! Eek!  I was also having trouble turning on the heat in my room, so I showed them the Google Translate below, and after much confusion and ineptitude, they eventually warmed up the room. 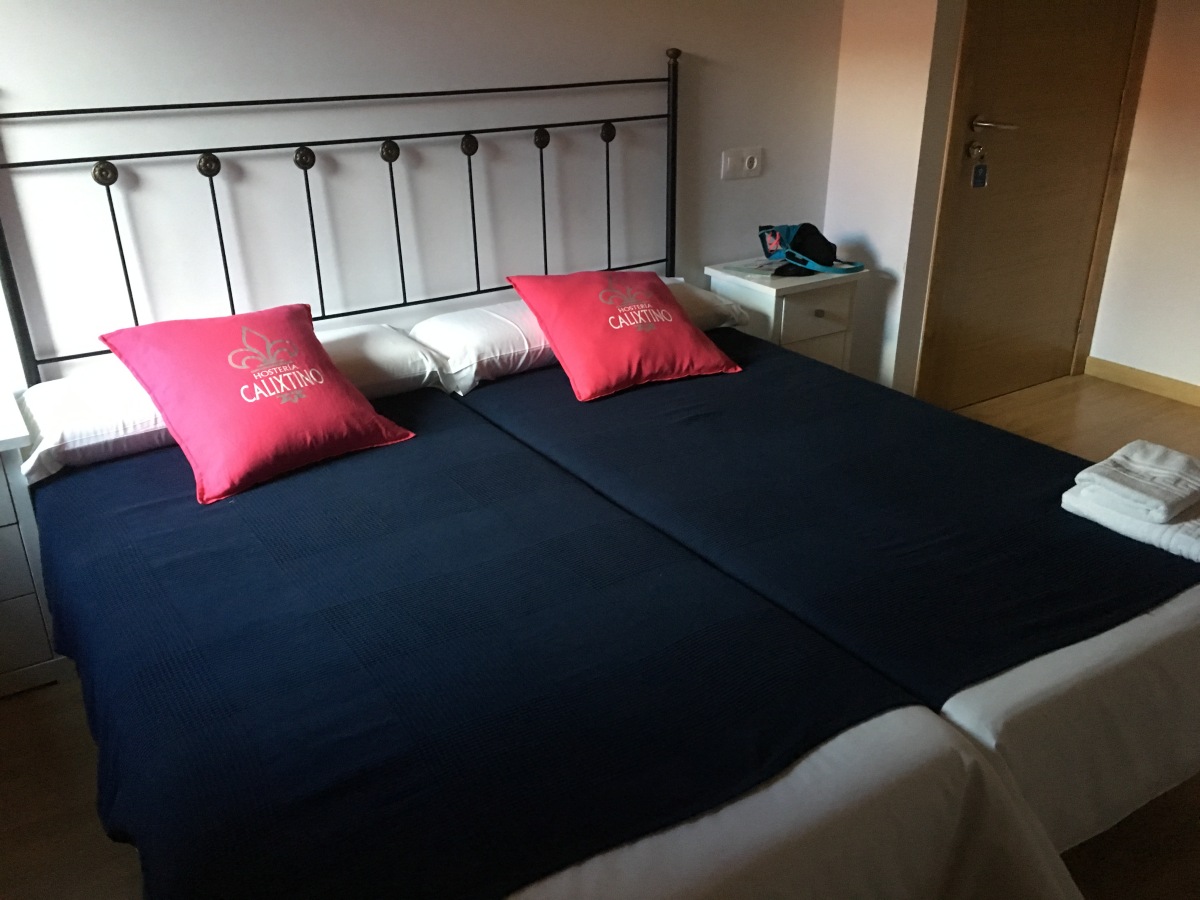 asking for heat at Hosteria Calixtino

You can find everything I’ve written so far on the Camino de Santiago here:

This post is in response to Jo’s Monday Walk: Sáo Brás de Alportel, Then and Now.