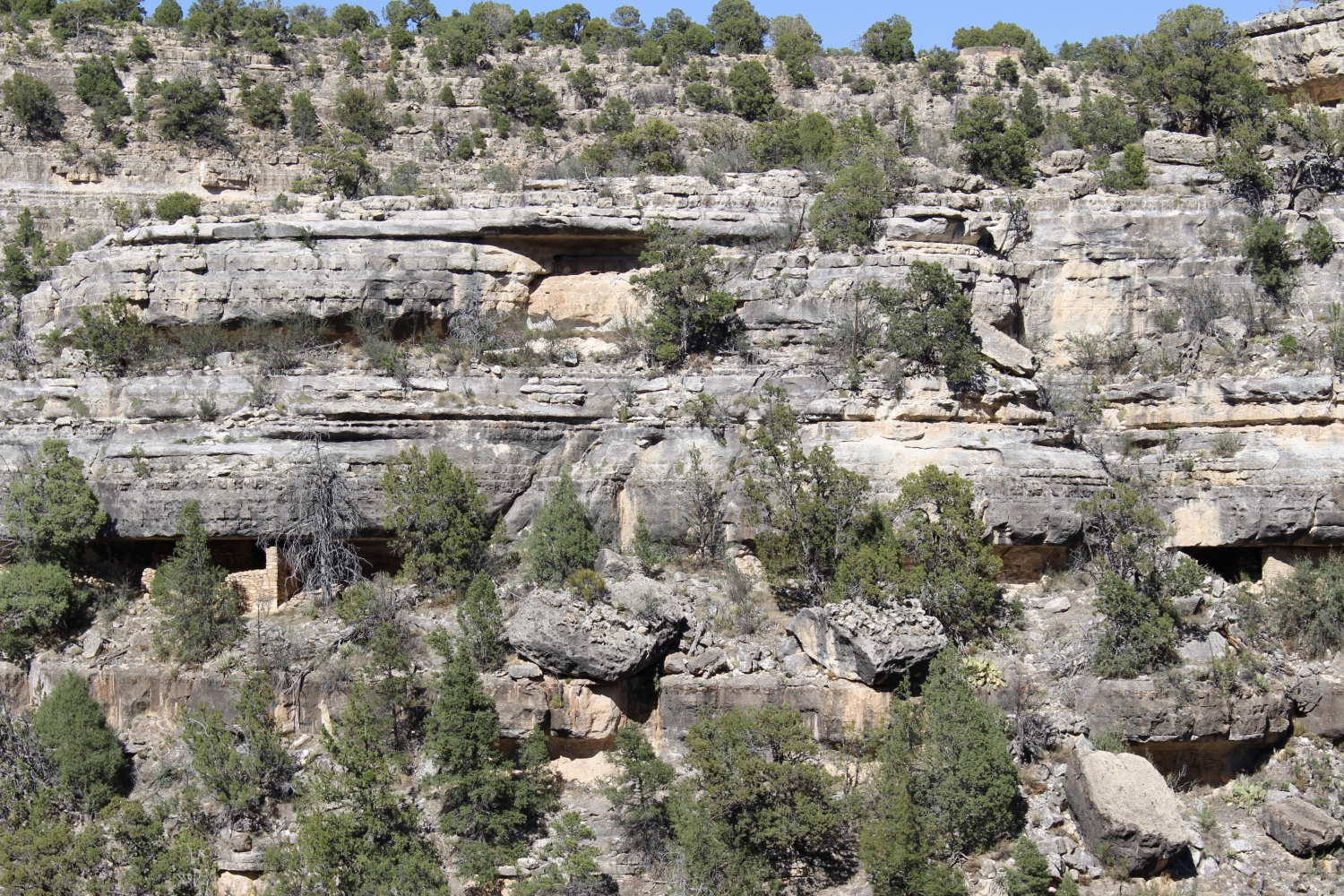 Before going to Flagstaff for the night, we managed to make it just in time to do the Island Trail at Walnut Canyon National Monument.  The Island Trail, a 0.9 mile loop, passes 25 cliff-dwelling rooms built by the Sinagua people and traverses different plant-life zones.  The trail has sheer drops along the outer edge and a 185-foot climb (240 steps) back to the canyon rim.

The trail closes at 4:00 and we made it just under the wire, beginning our walk around 3:30. 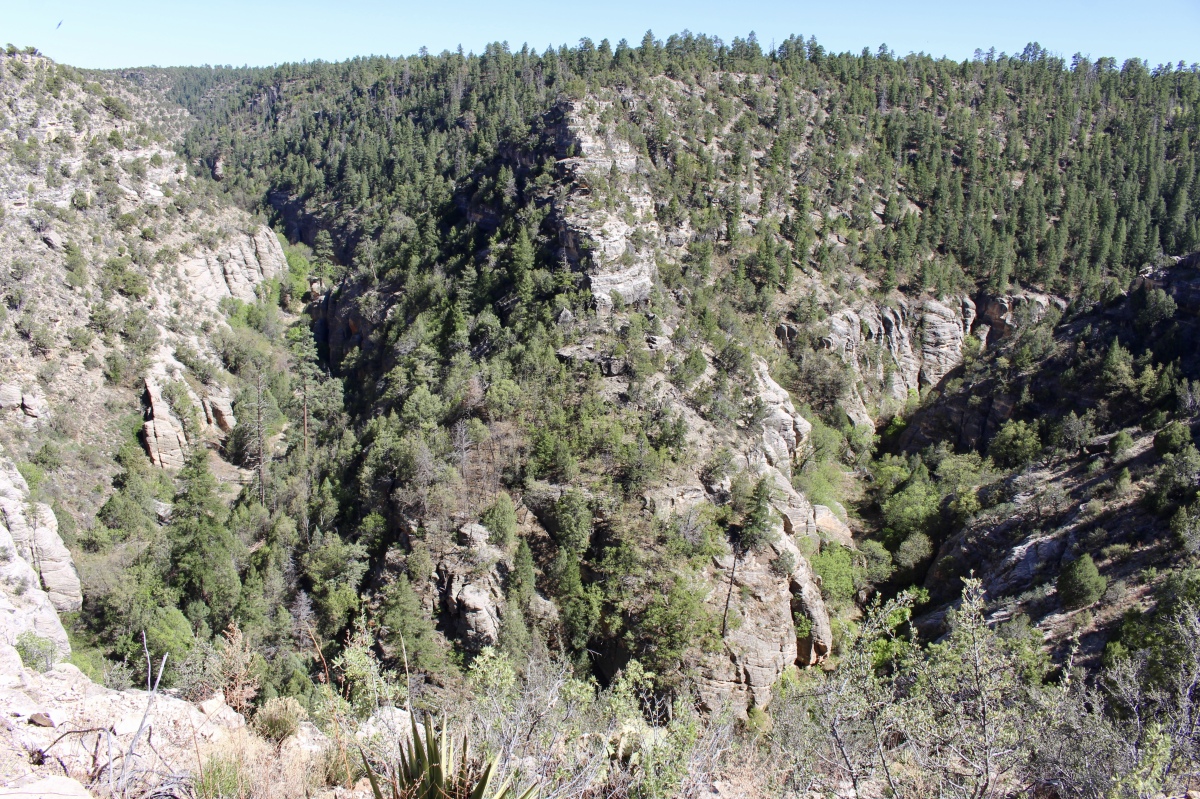 Twenty miles long, 400 feet deep and ¼-mile wide, Walnut Canyon was carved by Walnut Creek over a period of 60 million years. Artifacts show that Archaic people, who traveled through the Southwest thousands of years ago, probably occupied the canyon seasonally. These nomads were long gone by the time the only permanent inhabitants, today known as Sinagua (Spanish for “without water”), appeared and built their cliff dwellings between 1125 and 1250.

Archeologists believe women built the homes.  The dwellings were made from shallow caves eroded out of the limestone cliffs by water and wind. To form walls, builders gathered limestone rocks, shaped them roughly, then cemented them together with a gold-colored clay found in deposits elsewhere in the canyon.  Wooden beams reinforced the doorways.  Finally, the walls were plastered with clay inside and out.

Most rooms in this community did not house people. Archeologists think many rooms were used to store food, tools and water. Residents could have stored a 100-day water supply without much difficulty, given large pottery vessels and the abundant storage rooms found in the canyon.

The larger rooms are typical of living spaces, where people slept and sought shelter from inclement weather. Family size is unknown, but several people lived together in one room. Most work took place outside, weather permitting. 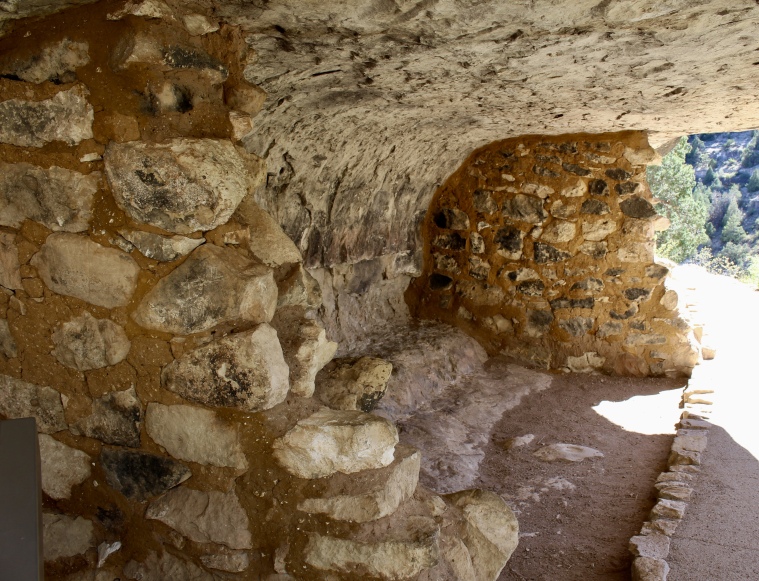 cliff dwellings on the canyon walls opposite

cliff dwellings on the canyon walls opposite 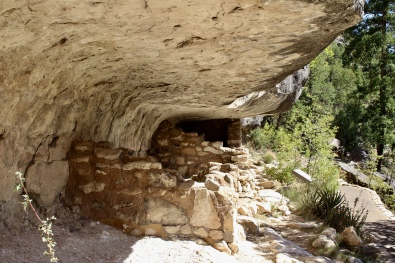 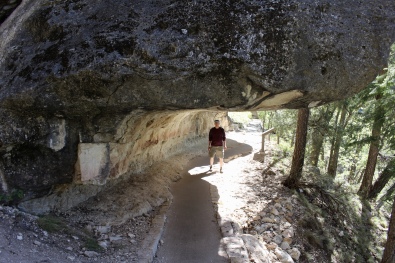 Mike under a cliff overhand

Walnut Canyon homes were generally situated on cliff sides facing south and east to take advantage of warmth and sunshine.  A few sites faced north and west, probably occupied during the warmer months. Overhanging ledges protected rooms from snow and rain, and shaded them during summer months. Thick walls of stone and mud insulated them from harsh winds and retained essential heat in winter. Small doors were covered with animal skins, mats, cotton cloth, or sticks woven together.  Air entered at the bottom, circled past a small fire, and carried most of the smoke out a hole above the door.

the Island Trail with steep drops to the right

Inside the canyon and throughout the pine forests on its rims, the Sinagua made their living by farming, hunting deer and small game, trading, and gathering an assortment of useful plants: prickly pear cactus, banana yucca, mahonia and rockmat, as well as others.

The tart berries of Femont’s mahonia or barberry were a minor food source, but people still seek the roots and bark to make a vibrant yellow dye for baskets and leather. The roots have antimicrobial qualities, as well as the chemical berberine (a strong alkaloid), which made them a cure-all.  Better known alkaloids include caffeine, morphine and quinine.

Navajo collect rockmat for ceremonies, the only documented use today.  Other uses for rockmat may now be lost to us. 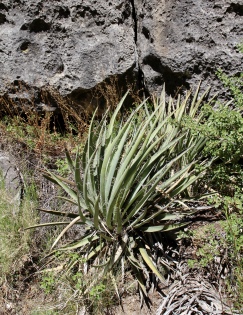 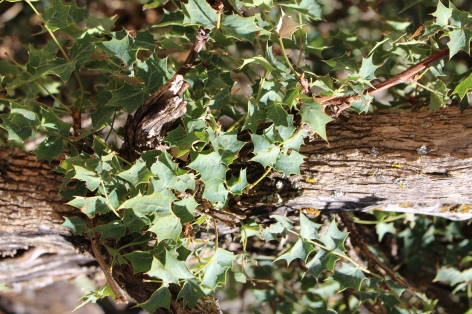 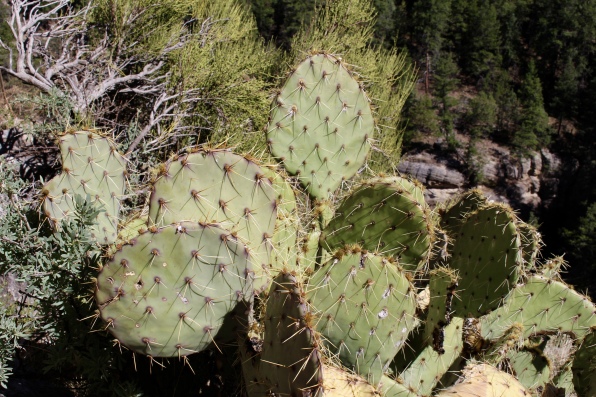 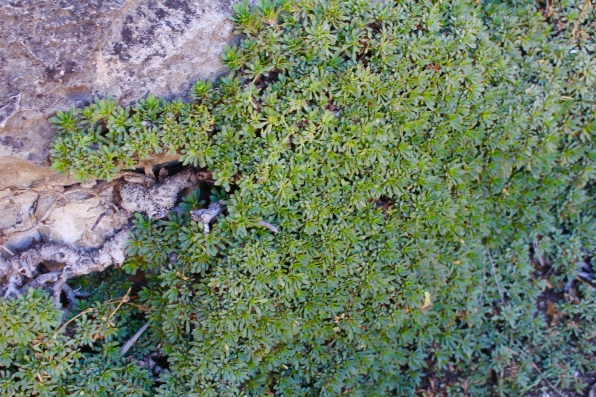 We walked around the south end of the Island Trail, sunny and bright today.

dwellings on cliff opposite

dwellings on cliff opposite

During the years when the Sinagua lived here, settlements ranged from the eastern slopes of the San Francisco Peaks northeast to the Little Colorado River and south to the Verde River Valley.  Trade items found in dwellings include turquoise from the Santa Fe area, seashell ornaments from the Gulf of Mexico and the Gulf of California, and macaw feathers from Mexico.

The cliff dwellings were occupied for little more than 100 years.  By 1250, the residents had moved to new villages a few miles southeast along Anderson Mesa, and, it is believed eventually assimilated into Hopi culture.  The Hopi today call their ancestors the Hisatsinom (“people of long ago”).  Their tradition suggests that these early migrations were part of a religious quest to have all clans come together.

I added yet another sticker and stamp to my National Parks passport. 🙂 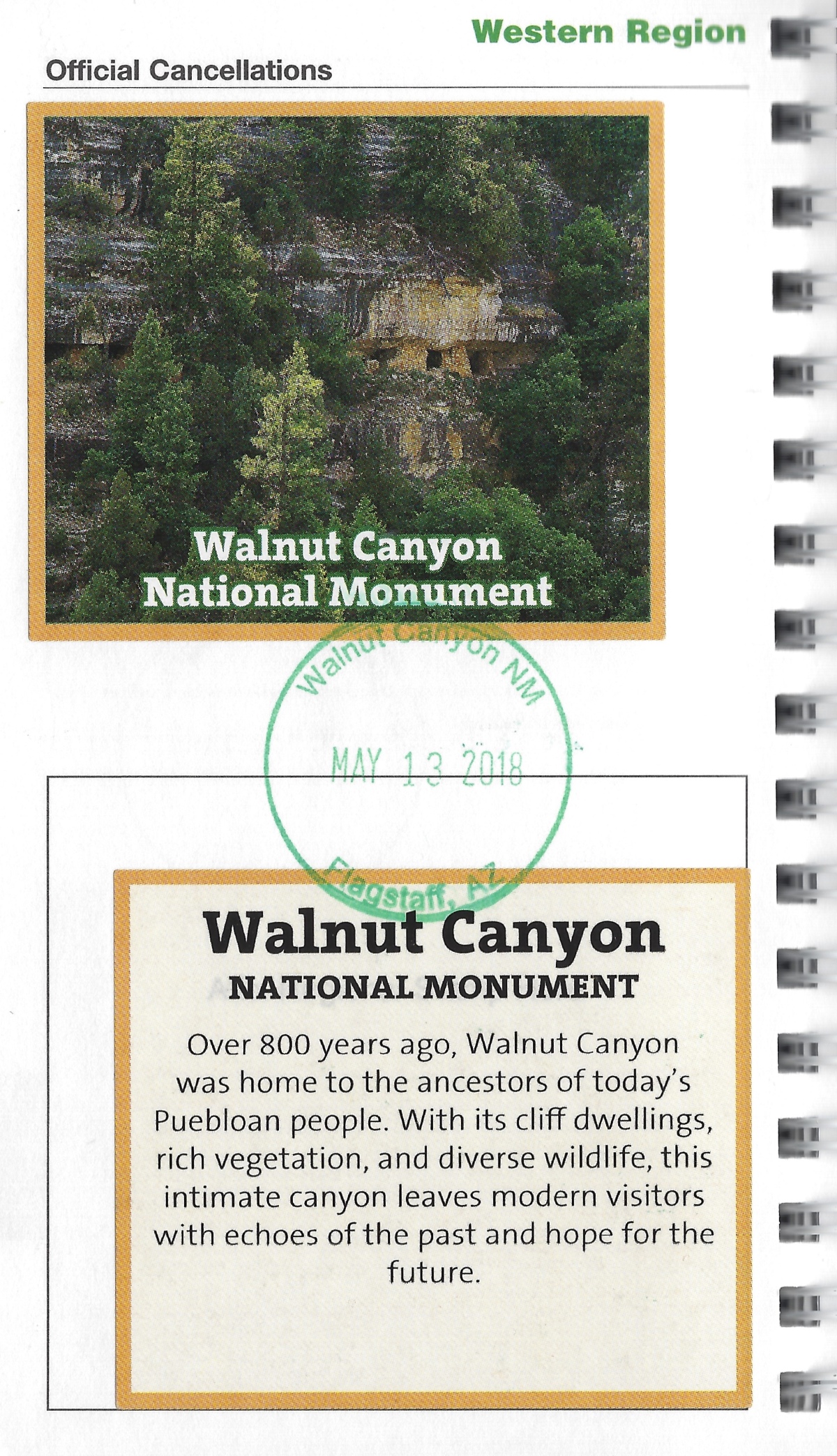 This post is in response to Jo’s Monday Walk.

A LITTLE PIECE OF MY HEART
Stu's Camino
This, that and the other thing

Seeking Solace in the Horizon of Life & Beyond