I started off our first morning in Charleston by writing my husband to see how things went the previous night with our son.  He said things had gone very well; they had a good talk about Mike’s childhood memories and various other agreeable subjects and it was very laid back.  I was relieved he hadn’t had to endure another meltdown, and I felt a little bit of that lingering black cloud lift.

Sarah and I drove to Liberty Square in Charleston and bought tickets for Fort Sumter National Monument Tours – Spirit of Charleston. We waited in a long queue in the warm, humid and breezy morning. Once on the boat, we cruised from Aquarium Wharf through the harbor to Fort Sumter.

We had great views of Charleston Harbor and the islands of the Cooper River Estuary and a marina.

We admired the Arthur Ravenel Jr. Bridge, a cable-stayed bridge over the Cooper River, connecting downtown Charleston to Mt. Pleasant. It has a main span of 1,546 feet (471 m) and is the third largest among cable-stayed bridges in the Western hemisphere.

A cable-stayed bridge has one or more towers from which cables support the bridge deck.  A distinctive feature are the cables, or stays, which run directly from the tower to the deck, forming a fan-like pattern or a series of parallel lines.

Today, the battered Fort Sumter stands at the entrance to Charleston Harbor on an artificial 70,000-ton sandbar, being part of the third system of fortifications ordered after the War of 1812.  Begun in 1829, enslaved laborers and craftsmen were among those who built the structure.

South Carolina delegates to a special secession convention voted unanimously to secede from the Federal Union on December 20, 1860. In November, Abraham Lincoln had been elected President of the United States with no support from southern states.  South Carolina listed its causes for secession, including: the newly-elected President was hostile to slavery; the Federal Government encroached upon the rights of the sovereign states; and the 14 northern states failed to endorse the Federal Fugitive Slave Act or to restrict the actions of antislavery organizations.

Within six weeks after South Carolina’s secession, five other states – Mississippi, Florida, Alabama, Georgia, and Louisiana – followed its example. Early in February 1861, delegates adopted a constitution, set up a provisional government – the Confederate States of America – and elected Jefferson Davis as their president. Soon, Texas joined.

When Abraham Lincoln was sworn in on March 4, 1861, he vowed the government would not consent to a division of the Union.

Fort Sumter was still unfinished when Federal Maj. Robert Anderson moved his 85-man garrison into the day after Christmas 1860, setting in motion events that would tear the nation apart four months later. 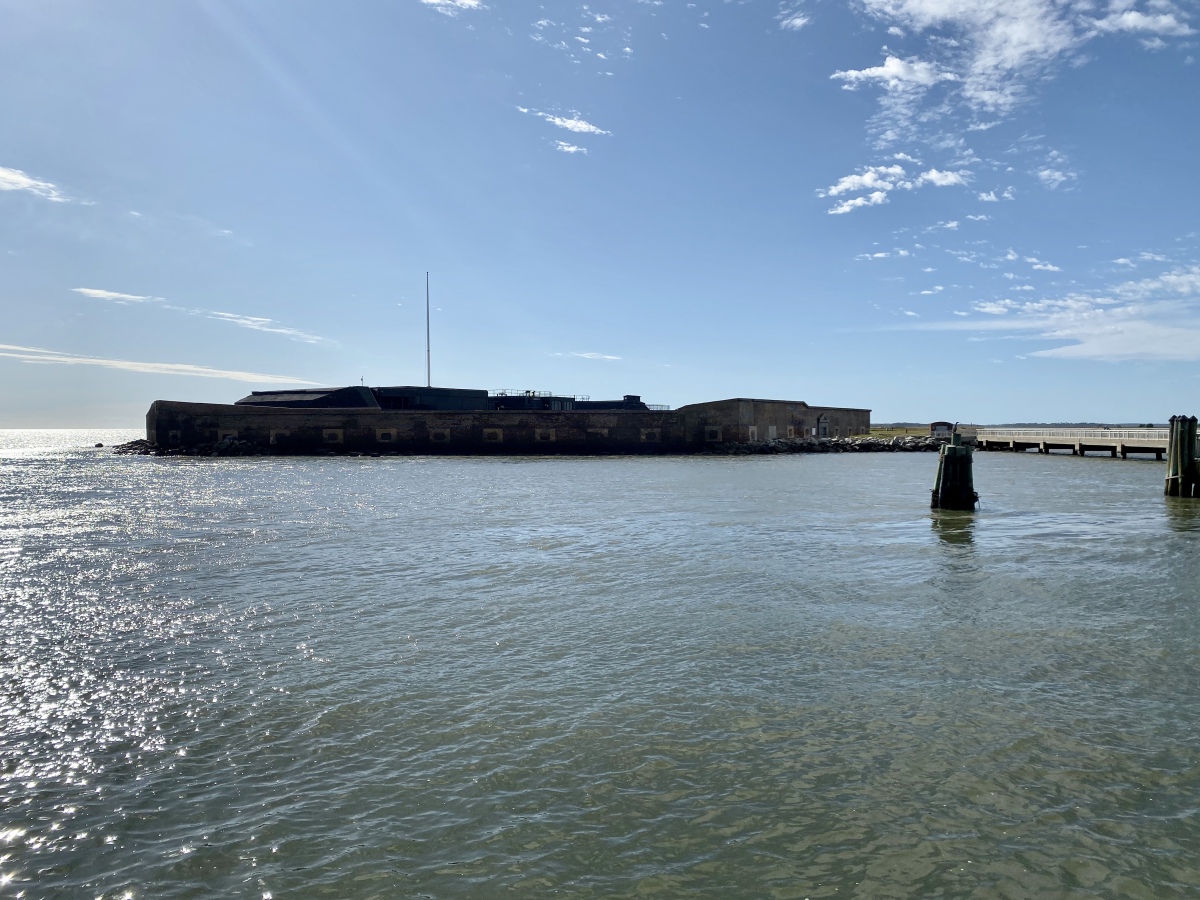 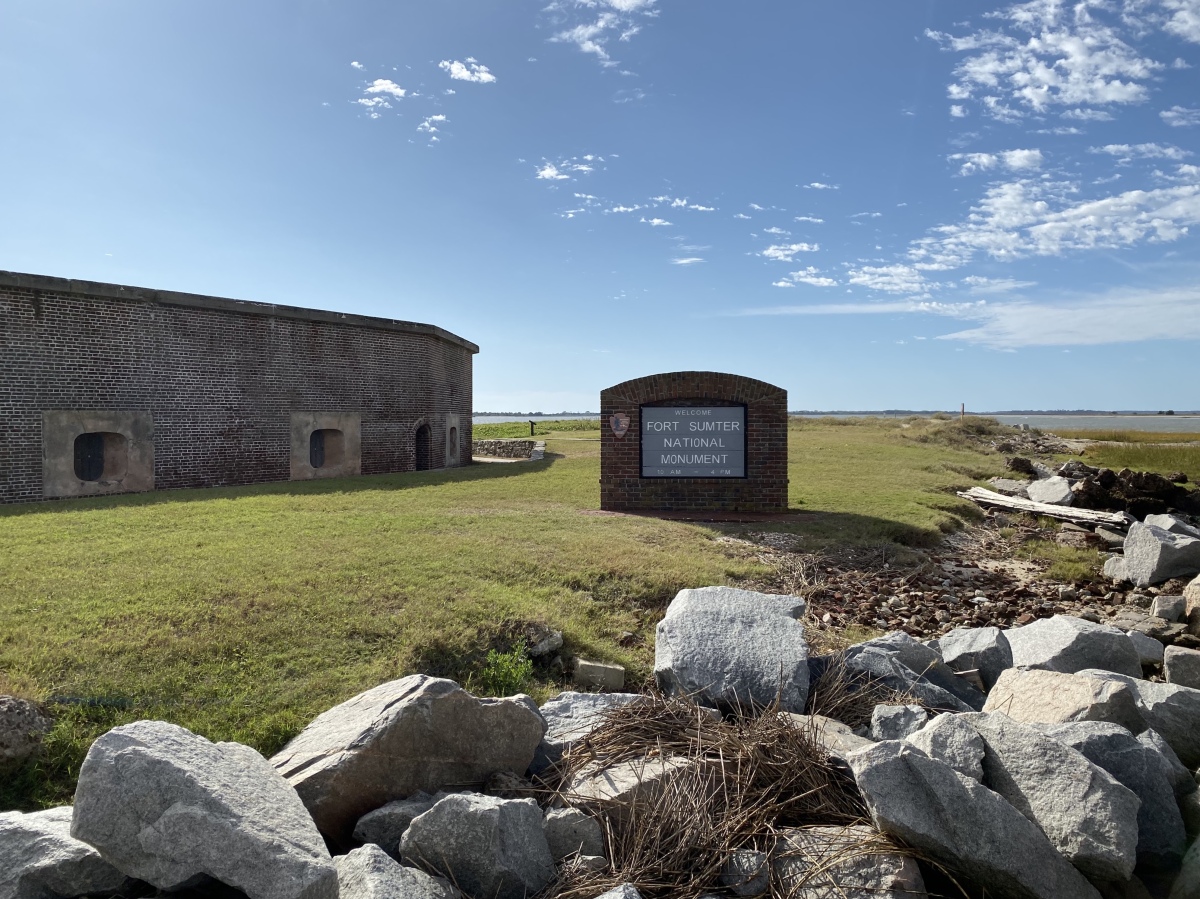 Major Robert Anderson refused to surrender Fort Sumter when requested to do so in the early morning hours of April 12, 1861. A few hours later, the first shot of the Civil War was fired from Fort Johnson by Confederate Captain George James.  The 10″ mortar shell, a signal for bombardment to begin, exploded above Fort Sumter. The first return shot from Fort Sumter was fired by Captain Abner Doubleday, the man once credited as the father of baseball (Moon: Charleston).

After various shots were fired by Confederates throughout the day, with some return fire by the Union, Anderson surrendered the garrison.

The Civil War had begun. 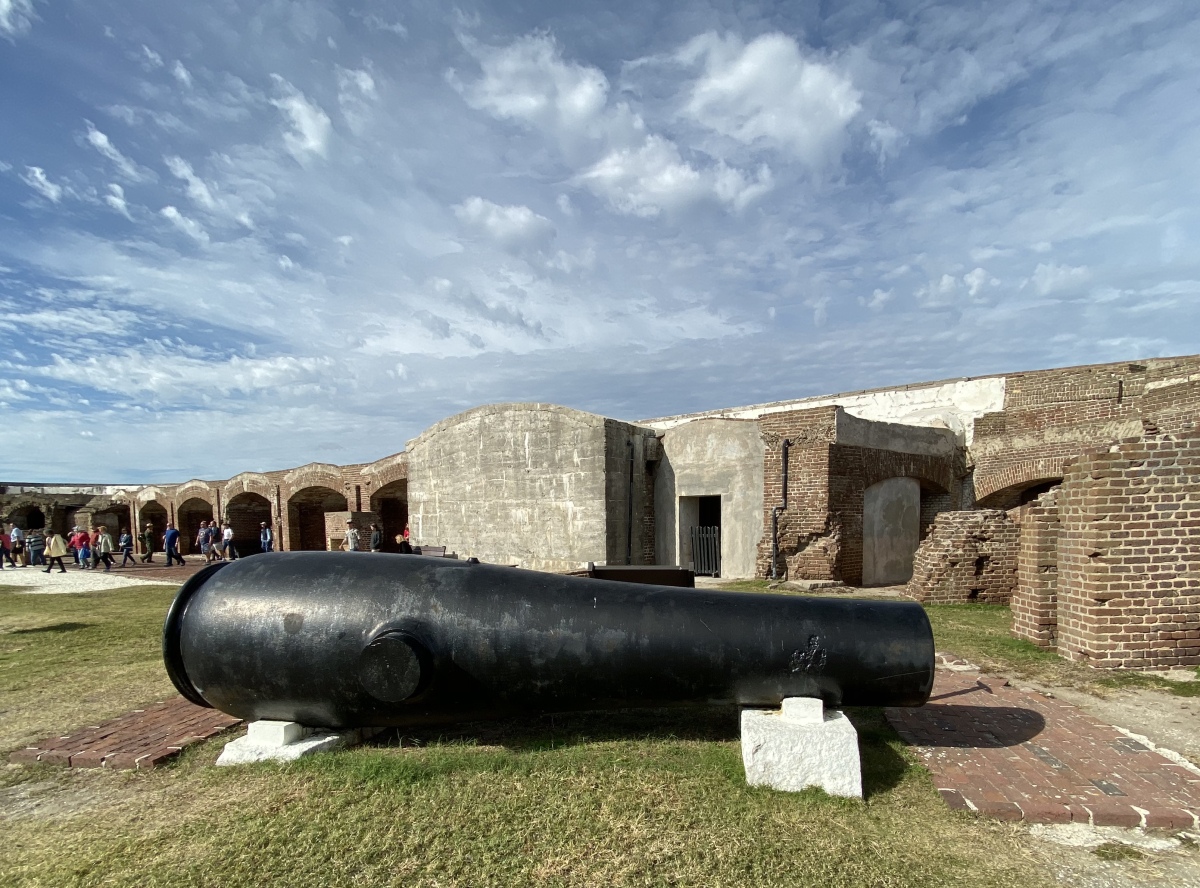 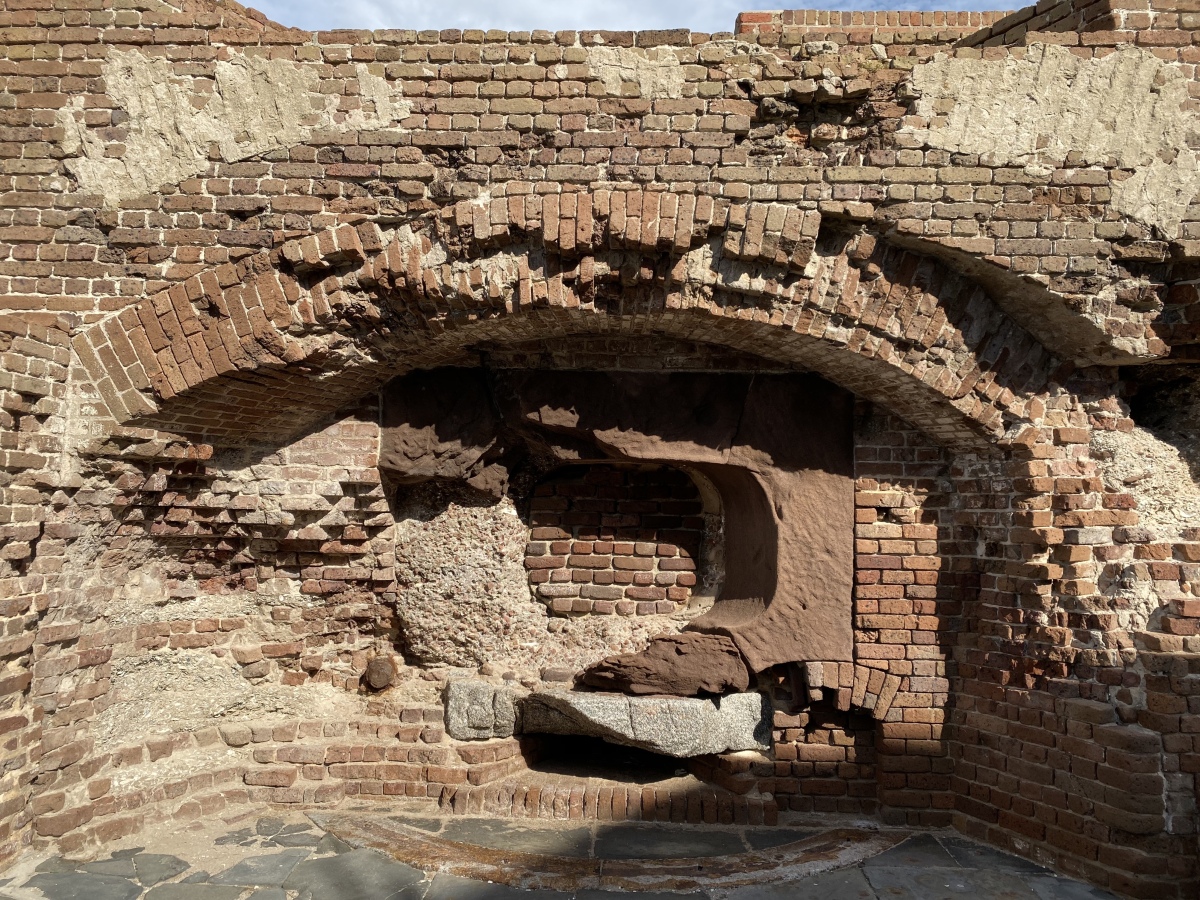 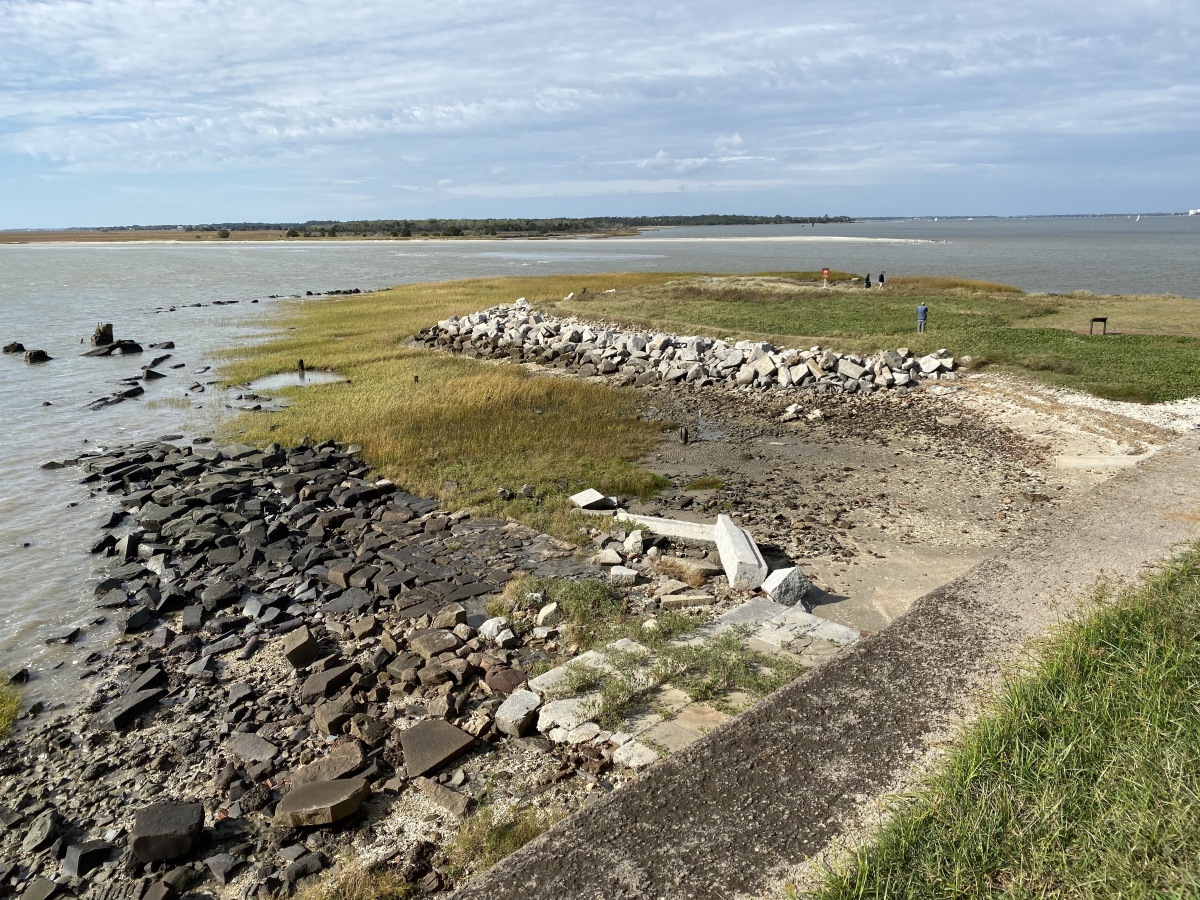 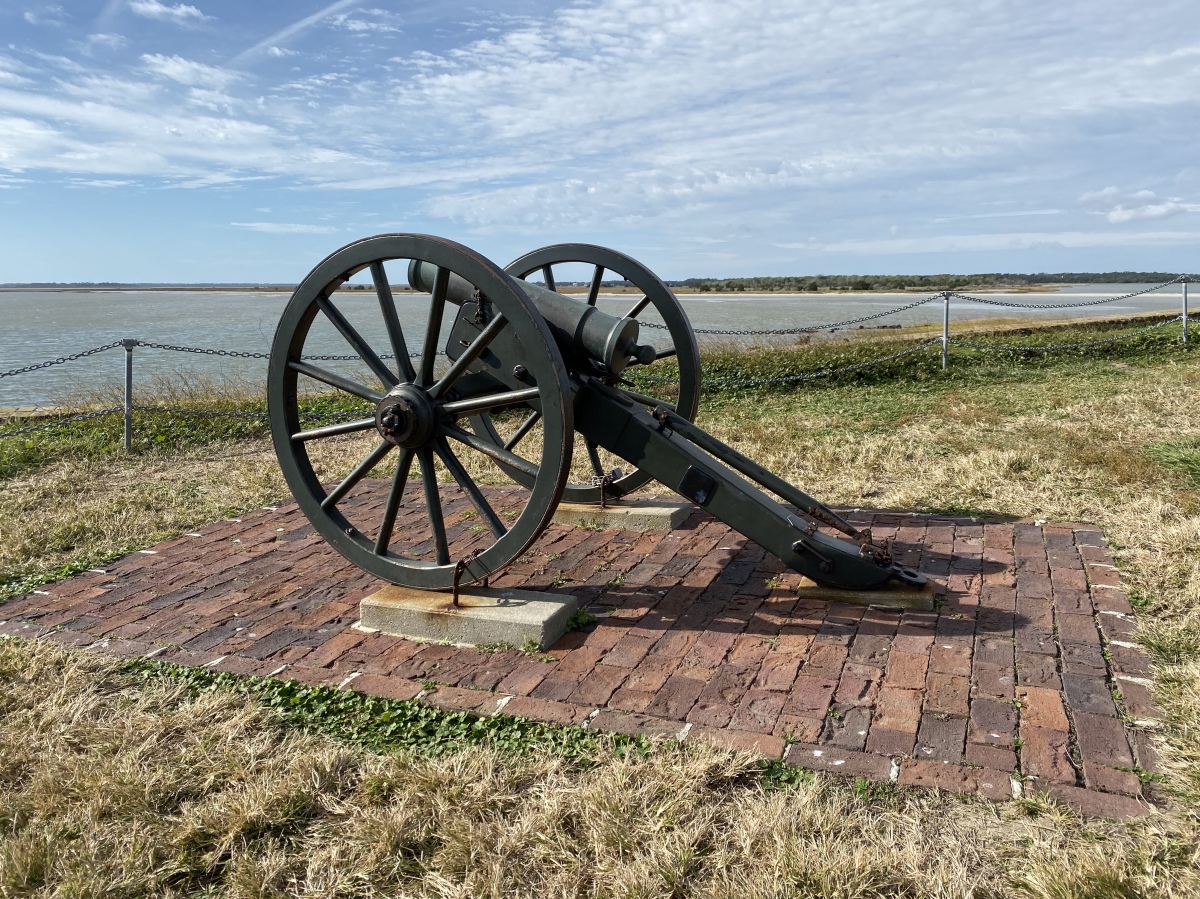 We watched the raising of the flag.

raising of the flag at Fort Sumter

raising of the flag at Fort Sumter

We walked through the museum.

The U.S.S. Keokuk, hit by a crossfire of 90 projectiles from Confederate guns on Fort Sumter and Sullivan’s Island, sank off Morris Island on the morning of April 8, 1863. Later, the Southerners recovered her guns and mounted one on Fort Sumter.

Federal forces finally reclaimed the Fort on April 14, 1865, four years after they had originally surrendered it.

The Stalemate Reaches an End

The Fort Sumter Flag had a diamond-shaped pattern of 33 stars. When the main flagpole was felled by a shot during the bombardment of Fort Sumter by Confederate forces, the flag was retrieved and remounted on a makeshift pole. The flag was lowered by Major Robert Anderson on April 14, 1861 when he surrendered Fort Sumter, at the outset of the Civil War. 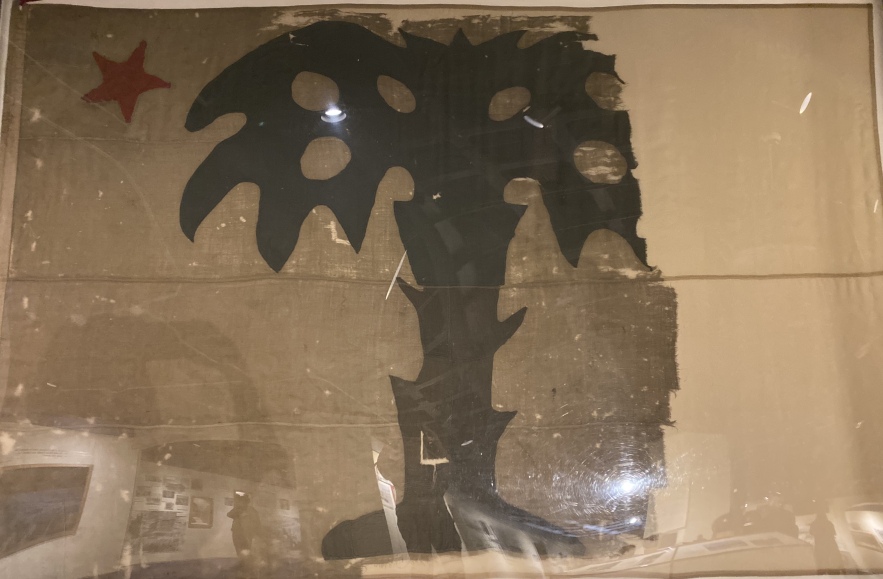 We walked around the grounds of the fort while we waited for the boat to take us back to the mainland.  Of course, I got my cancellation stamp for Fort Sumter. 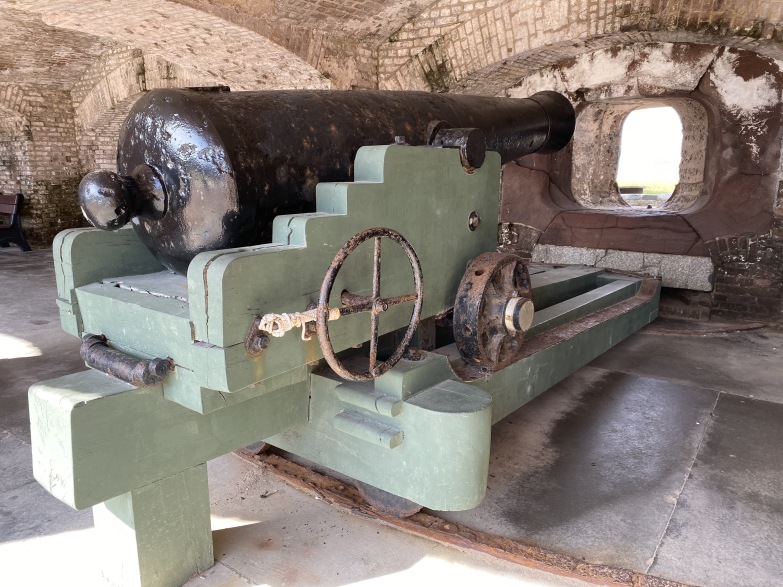 The trip took about 2 1/2 hours.  I didn’t spend as much time perusing the Ft. Sumter Visitor Education Center as I would have liked because Sarah was ready to explore the town.

After we docked, we walked down Calhoun Street to King Street.

We found a fabulous mural on a nondescript building. 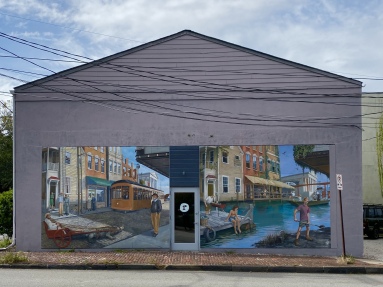 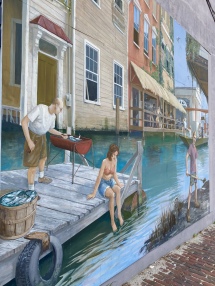 We passed Emmanuel African Methodist Episcopal Church, known simply as “Mother Emanuel.”  It is one of the South’s oldest African American congregations.  Before the Civil War, one of the church’s founders, Denmark Vesey, was found guilty of planning a slave uprising, and the edifice of the church was burned as retaliation for his involvement (This event was featured in the novel The Invention of Wings by Sue Monk Kidd). The church today dates from 1891 and has hosted greats such as Martin Luther King, Jr. and Coretta Scott King, as well as Booker T. Washington. In 2015, nine worshipers, including the pastor Clementa Pinckney, were horrifically murdered by a white racist (Moon: Charleston).

We continued walking through Marion Square, once a parade ground.  It is flanked on one side by the Old Citadel, now a hotel. 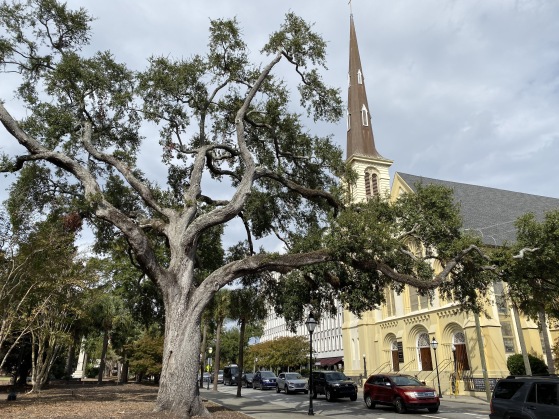 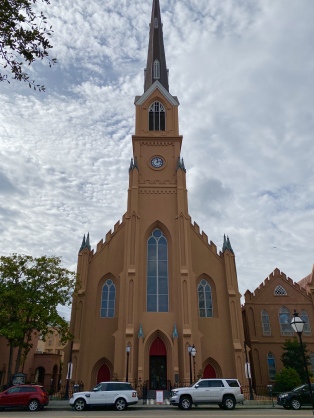 We made our way down Calhoun Street to King Street.

The College of Charleston is the oldest college in South Carolina; its historic Sottile Theatre serves as a performance and event venue for the College and the community.

At Basic Kitchen on Wentworth St., we sat at the bar for lunch.  Lamps with fringed shades lined up along the bar. I had the day’s special: Salmon Tartine: salmon tartare, beet relish, yogurt, and dill on pain de mie.

bulletin board at Basic Kitchen

After lunch, we strolled down colorful King Street, the shopping center of Charleston. 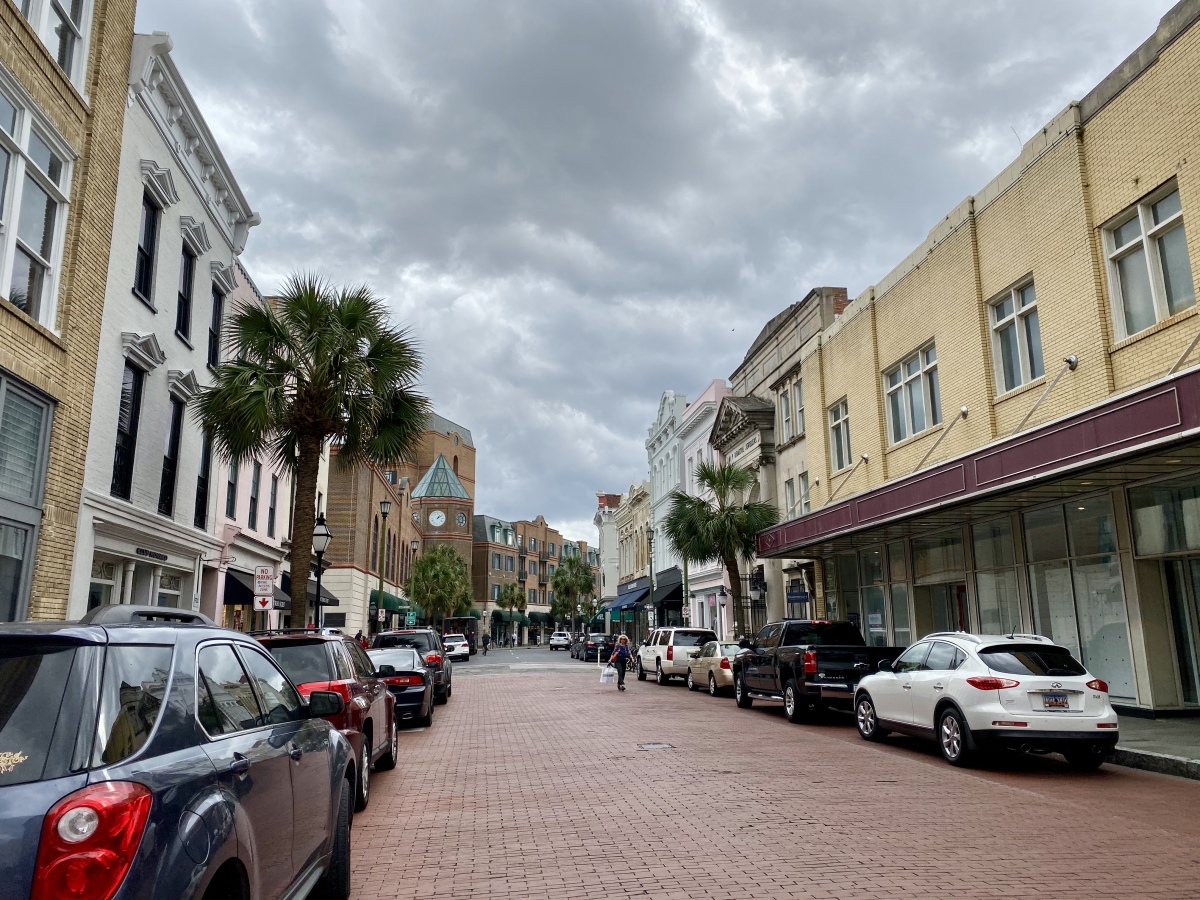 We walked to Anthropologie and looked around, then to H&M, where Sarah bought a number of things.  I stopped at Urban Outfitters to look at the Fujimax cameras. We stopped at a cookie shop and got snickerdoodles and a chocolate crunch cookie.

We made it back to the car as it began sprinkling, then drizzling. We stopped at Harris Teeter for groceries.  I got a bag of boiled peanuts, one of my favorite southern snacks, for donating $1 to charity.

We returned to our Airbnb to relax, eating all the boiled peanuts in the meantime. Sarah napped and then we each took long hot baths.

In the evening, we went to Chez Nous, with its tavern-like atmosphere: quiet, dark, with simple plain furnishings and exposed ceiling rafters.  The menu here changes daily and there are only a few choices.  The owners handwrite the menu each day. 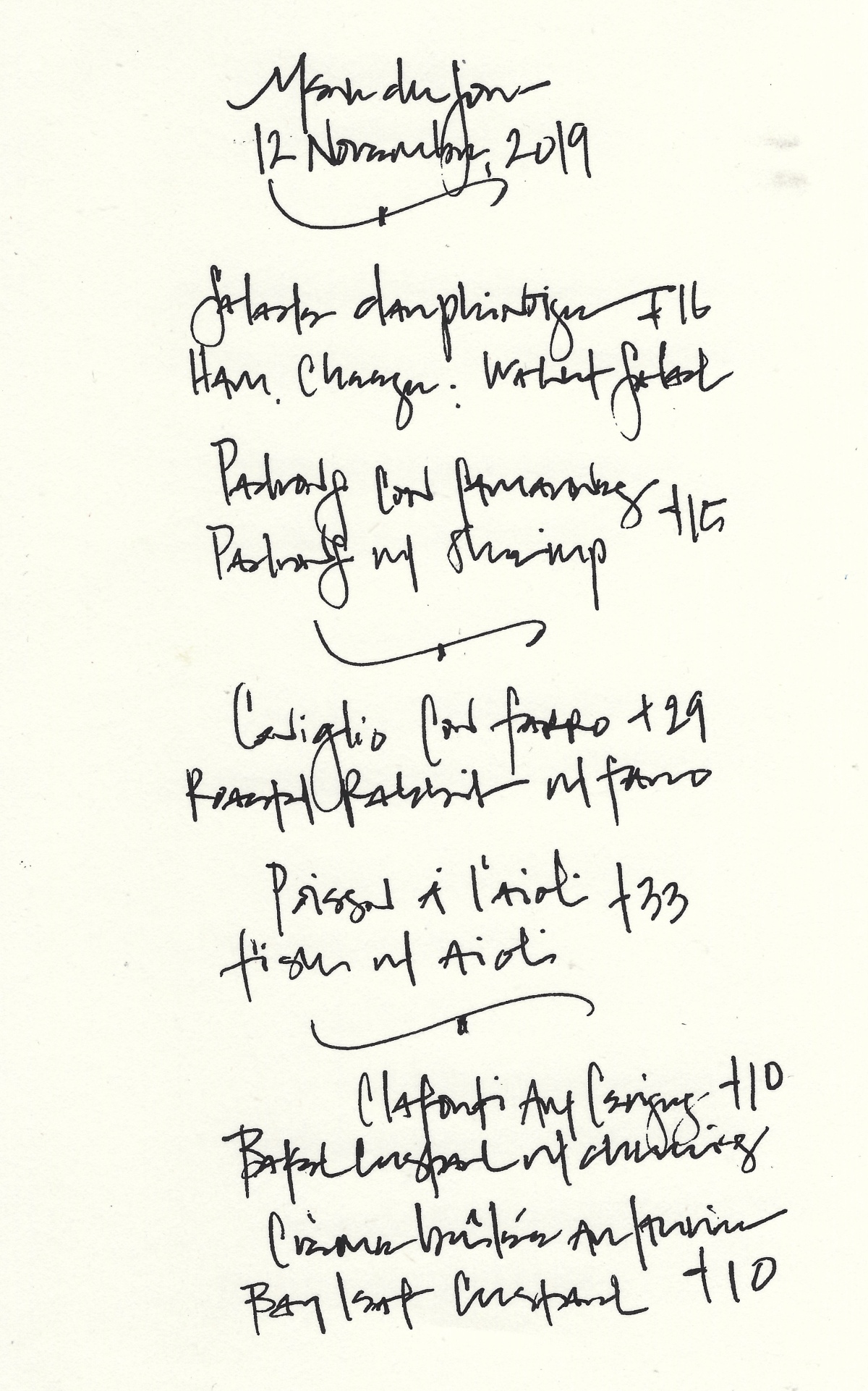 I had Padrones (peppers) with shrimp, fish with roasted tomatoes, haricots verts & aioli.   Sarah had a salad with ham and cheese, and roasted rabbit with farro.  We both got clafouti with cherries for dessert. The meals were great but the dessert was mediocre. This was a very expensive place: it cost us $168 before tip! 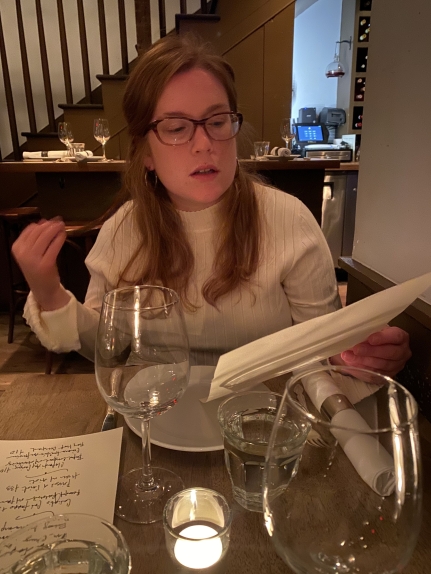 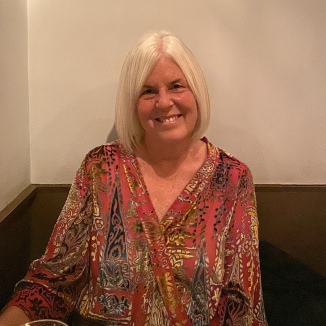 me at Chez Nous 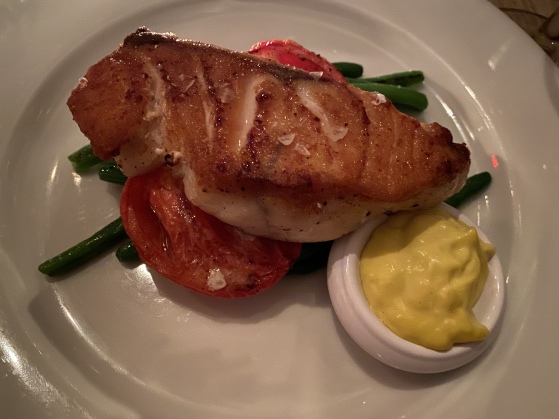 Back at our Airbnb, we relaxed.  I watched a junior chef show with Sarah, then read my book, The Invention of Wings, by Sue Monk Kidd.

Meanwhile, back at home, it seemed our son went to his massage therapy class from 5:00-11:00, but we found out a few days later than he didn’t go to class at all but was afraid to tell my husband.