The day had come for our rendezvous. I had just finished walking 799km on the Camino de Santiago, with bus trip interludes to Muxía and Finisterre, finally returning to Santiago de Compostela. It was the day after my 63rd birthday and I was due to meet my husband in Braga.

Enamored of Portugal as I was from my first visit there in 2013 (Portugal), my enthusiasm had infected my husband.  I had been feeling a fierce nostalgia for the sea, craving the castles and gardens of Sintra, longing for azulejo-covered buildings, dreaming of the red rooftops of Lisbon, tasting pastel de nata and fresh seafood.

Mike flew overnight from Washington, D.C. and drove a MINI Clubman from Lisbon to Braga, while I took a taxi to the bus station in Santiago, then the 10:00 ALSA bus to Porto, stopping 20 minutes in Vigo, Spain, and arriving at 11:30 Portugal time.  With the time change and the stop, it took me about two hours, while Mike’s drive was over four hours on top of his overnight flight.

The enduring light of the Spanish countryside followed the ALSA bus as we left behind hilly whitewashed villages in Spain and rode into the lush scenery of Portugal.  The bus pulled in to a bus depot in Vigo, and I was relieved, never knowing when trapped on buses in foreign lands when bathroom stops would be forthcoming.

When we passengers boarded the bus again, I noticed a welcome solace settle over me. I didn’t have to walk if I didn’t want to (although I could, and would!), I would have my husband to lean on, and I could wear my regular street clothes for the first time in 55 days. Oh, how much I pined for clothes other than the hiking clothes I’d been wearing on the Camino!

Looking out the windows of the bus, I felt riveted by the changing countryside and watched through the windows with wonder – the hilltop towns, the red roofs, the green hills.

Next stop was Braga, Portugal’s third largest city, founded first by the Celts and then conquered in 136 BC by the Romans, who christened it Bracara Augusta. Later the Moors moved in (715 AD) and later still, Fernando I, king of Castilla y Leon, reconquered the city in 1040.

Braga is famous for having the first cathedral in the country; it is an elegant town with ancient narrow lanes, an upscale old center with lively cafes and trim boutiques, restaurants and low-key bars.  Home to the Universidade do Minho, it was designated the European Youth Capital in 2012. Today’s conservative town has about 192,000 residents.

I was the only one on the bus to get off; everyone else was bound for Porto. I taxied to Domus 26 Guesthouse with a confused driver, where I was warmly welcomed by the owner, Conceiçao.  The room wasn’t ready, and hunger had hit me hard, so she directed me to brac Restaurante, where I enjoyed an amazing buffet lunch of cold salads, hot soup, hot dishes, and dessert, all for 9€.

Feeling full, I joined tourists and residents on the cobblestone streets, whiling away the time until I could check into my room.  I meandered past azulejo-tiled buildings, the Sé Cathedral, the chapel of Nossa Senhora da Torre and St. Paul’s Church.  I followed a couple of lovebirds down the street.

Finally, after checking in to our spacious pink and white room, I waited for Mike to arrive with himself, the car, and the suitcase I’d packed before I left for the Camino. I relaxed on the bed, covering myself with a blanket, hoping for a nap but too excited to sleep. I hopped up numerous times to stand on the balcony, watching for his arrival. He called to say he was driving around in circles, the GPS not giving him proper directions to the guesthouse.  I went out to the street and walked up and down, telling him to look for me on the street near the cathedral.  He thought another church he’d found was the cathedral, and he kept driving around that.  Finally, after a good long time with me pacing around on the street, he arrived, after I told him to put “brac Restaurante” into the GPS.

We showered and he relaxed a bit after his long journey.  I was tickled to change into new clothes from the suitcase he’d brought. We ventured out to the town past colorful tiled buildings, hanging laundry, mannequins in mod clothes on balconies, a man with a stuffed fish hanging in front of his face, a bicycle with a basket of flowers on the handlebars at Casa Centenaria, a jacaranda tree bursting with birdsong, café tables under umbrellas, the Cathedral and the BRAGA sign, where we both posed for pictures. We met Francisco Sanches, with his round frilly collar, beside a church with his name on it. We stopped into Igreja de Santa Cruz, and then walked into the old town to find dinner.

On our way, Mike stopped to marvel over a huge tree in the courtyard of a hotel, how it must be over 100 years old.  A Portuguese woman standing nearby volunteered to walk into the hotel and ask how old it was. They supposedly “told” her it was over 100.  Then she looked like she was going to cry, said she hated to ask, but could we give her some money for dinner? I felt bad for Mike because he so often believes in the goodness of people and was caught up in marveling over this tree with this strange woman.  In the end, she was faking it just to hit us up for money.  I wasn’t shocked as I don’t trust people easily and I had felt something like that coming.  We ended up giving her 10€, but I could tell Mike felt he’d been duped.

See below for photos and historical facts and figures, if you’re interested. 🙂

Taking the 10:00 ALSA bus from Santiago to Porto, we stopped 20 minutes in Vigo, Spain, and arrived in Braga at 11:30 Portugal time.

Domus 26 Guesthouse was a lovely guesthouse with a spacious room and fabulous breakfast. 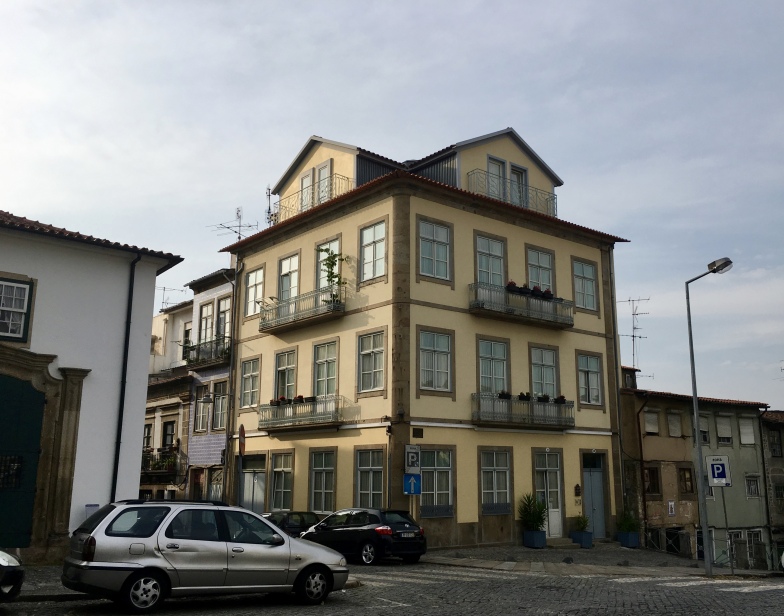 our room at Domus 26 Guesthouse

our room at Domus 26 Guesthouse

I enjoyed an expansive and delicious buffet at brac.

The Sé Cathedral is the oldest in Portugal, devoted to St. Mary of Braga.  Its façade is the result of a Baroque renovation in 1723. 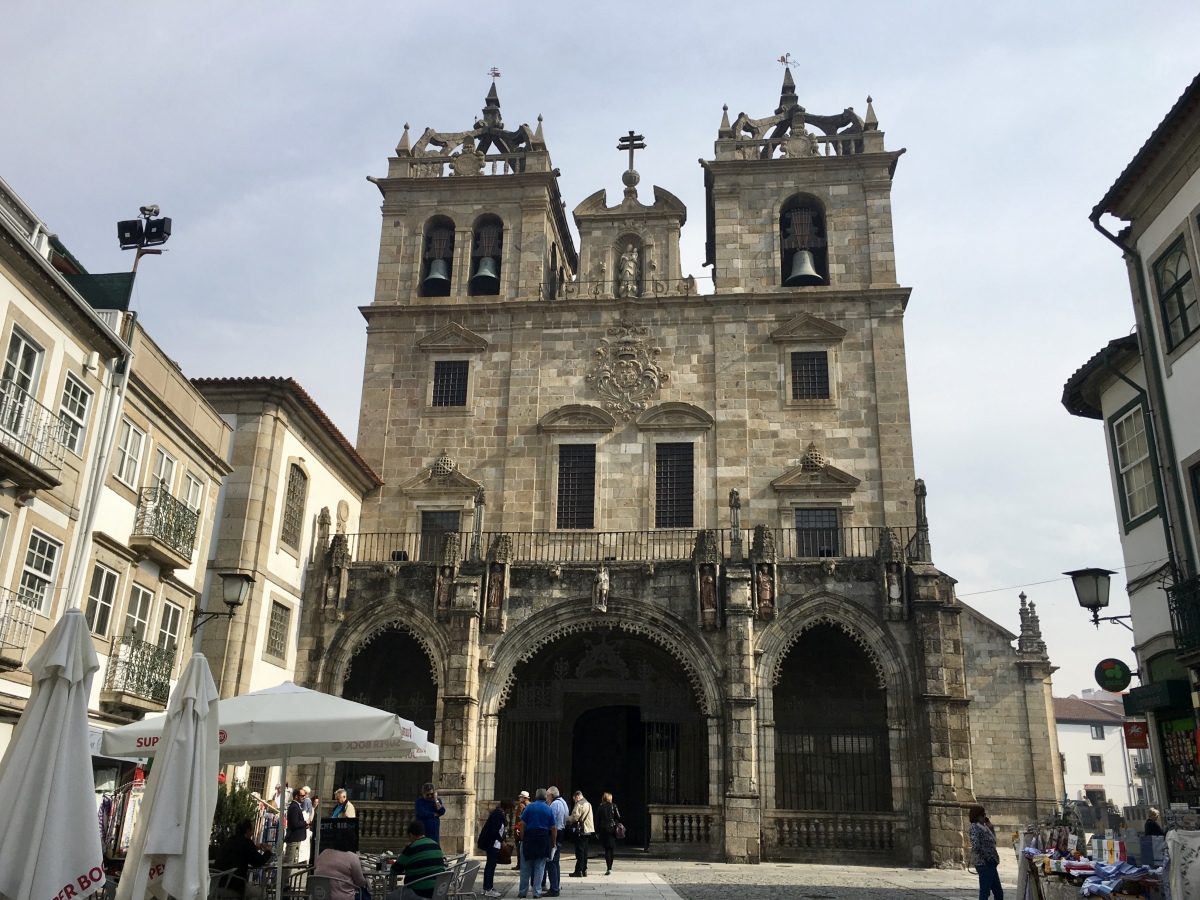 So many façades throughout Portugal are covered in azulejos.

St. Paul’s Square is the nave of an open air oratory.  The chapel of Nossa Senhora da Torre was built in thanksgiving to the Virgin for having saved the city from the earthquake of 1755. 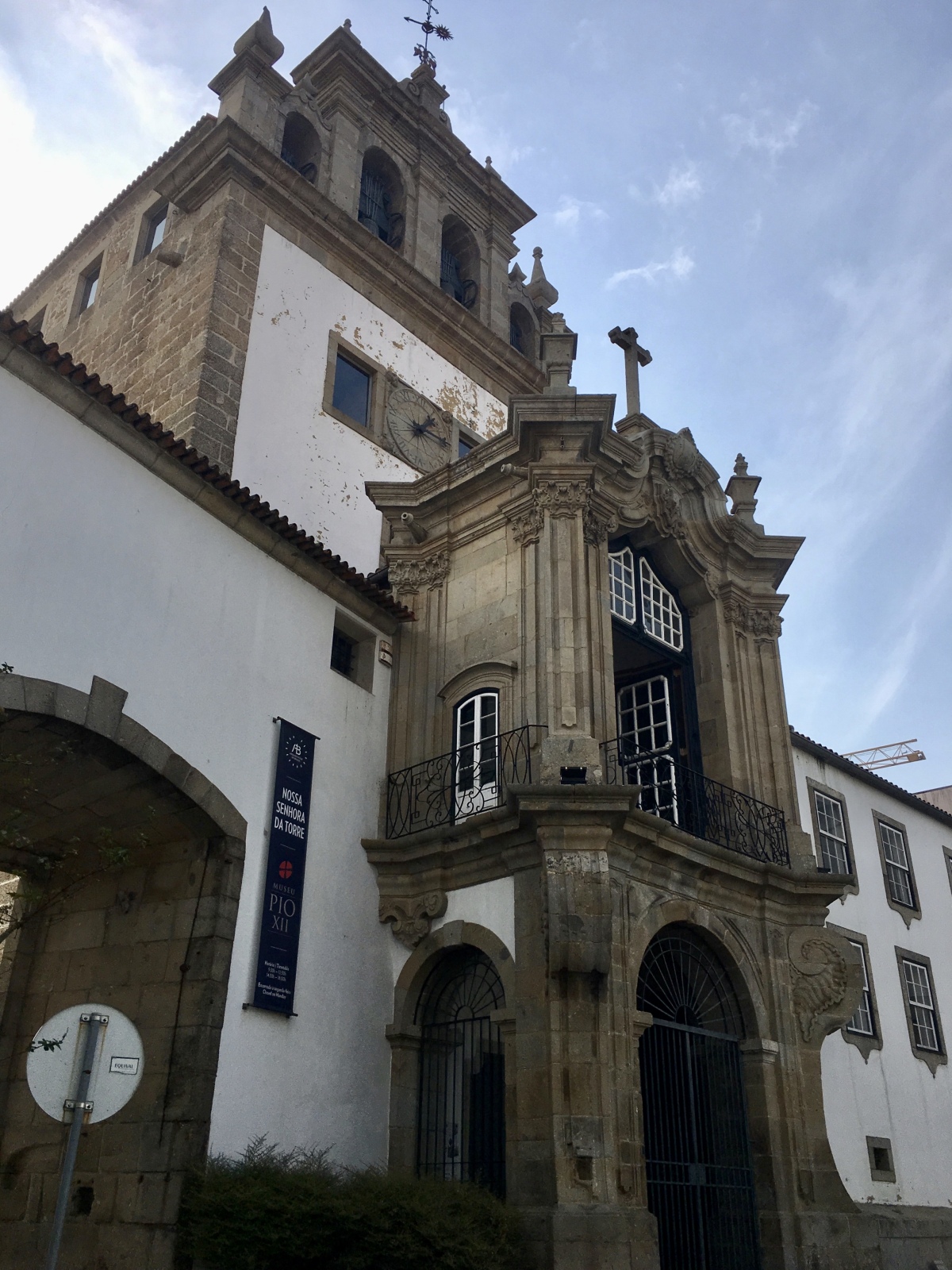 St. Paul’s Church, with its austere façade, was founded in 1560 and handed over to the Jesuits by Archbishop D. Frei Bartolomeu dos Mártires (Friar Bartholomew of the martyrs). 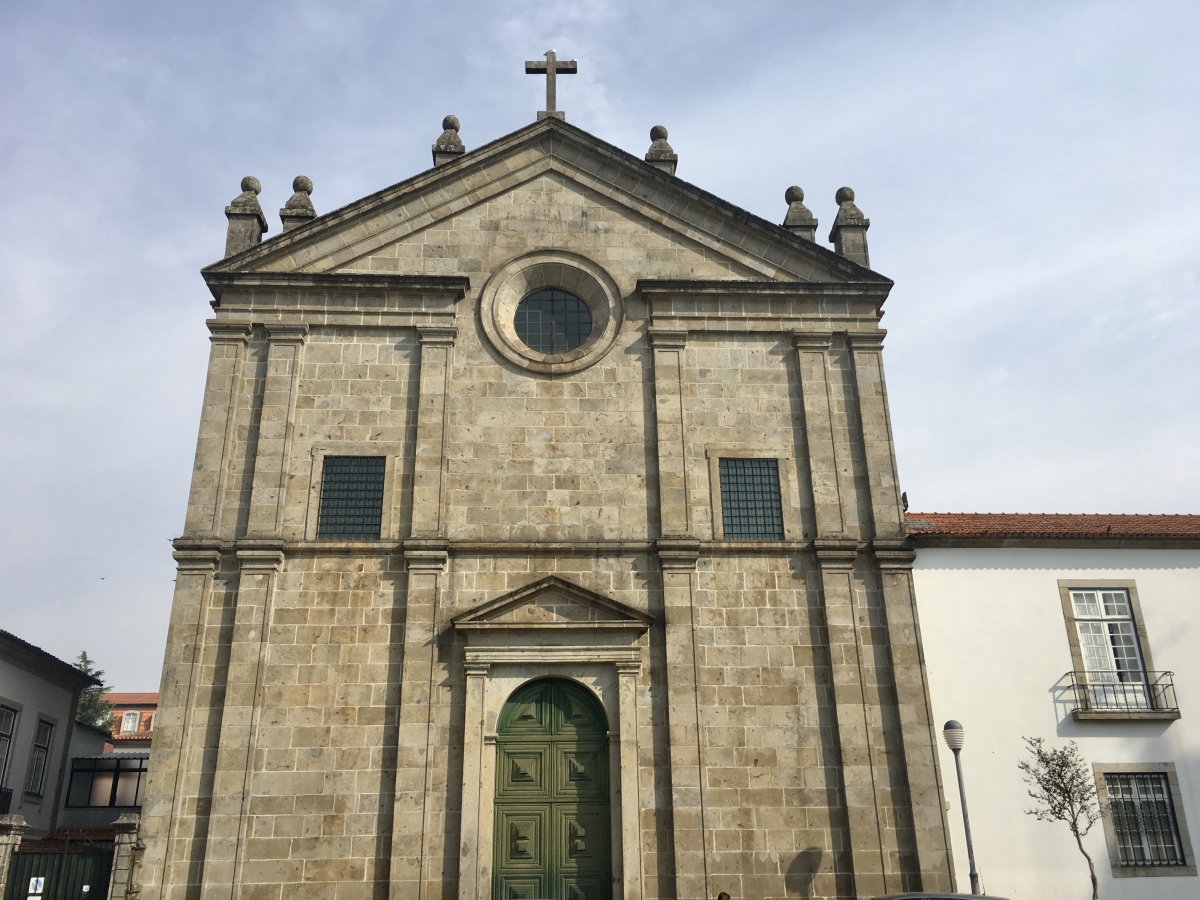 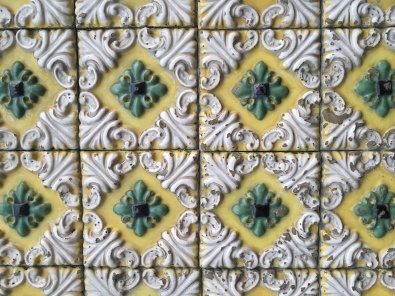 relief near the Sé

I love the weathered buildings in Portugal, such as the Junta de Freguesia (Parish Council).

We were greeted by a statue of Francisco Sanches, who was born in Galicia, Spain, but was baptized in Braga in 1551. His father was Spanish and his mother Portuguese. He studied in Braga until he was 12, when he moved with his parents to Bordeaux to escape the surveillance of the Portuguese Inquisition. After 1575, he ended up as a professor of philosophy and medicine at the University of Toulouse. 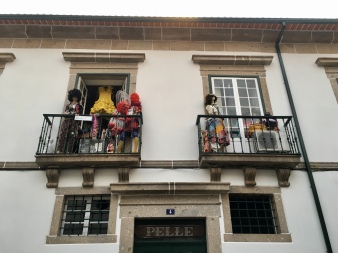 a man with a fish head 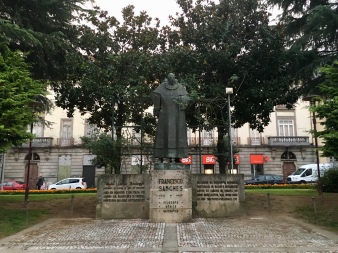 We posed for pictures in the letters of the BRAGA sign in front of the Igreja do Hospital de S. Marcos.  This site is dedicated to St. Mark and has traces of a late Baroque structure.  It also has classical motifs in its façade.

BRAGA sign in front of the Igreja do Hospital de S. Marcos

Igreja de Santa Cruz is an example of the work of a devoted brotherhood and expresses the passion of Christ. It was build around the first quarter of the 17th century. 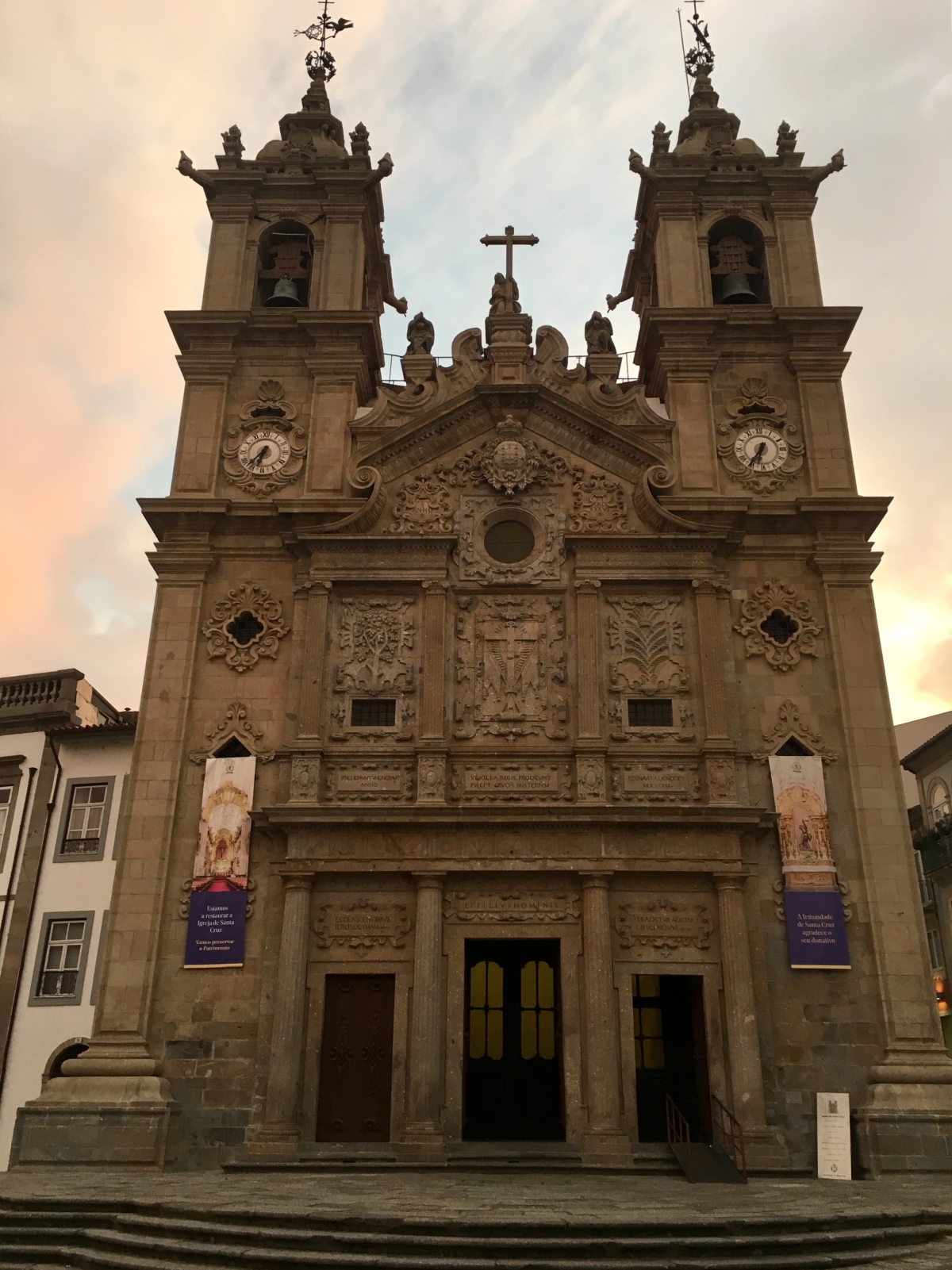 Cozinha da SÉ is a Michelin-starred restaurant where we enjoyed a multi-course meal at  the end of our rendezvous day. 🙂 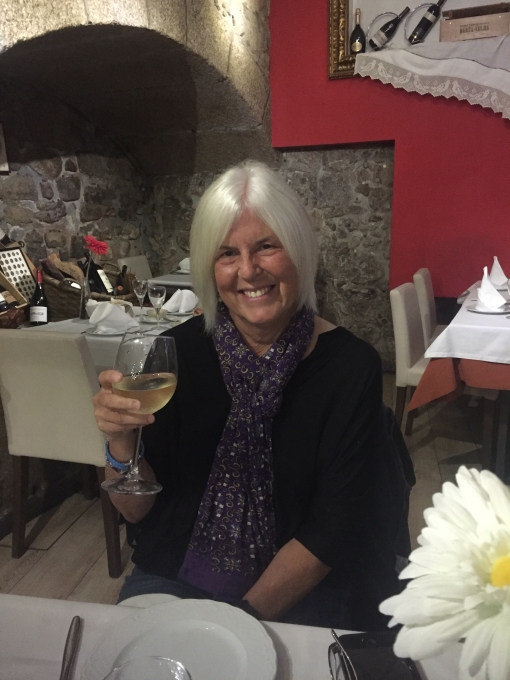 me at Cozinha da SÉ

“PROSE” INVITATION: I invite you to write up to a post on your own blog about a recently visited particular destination (not journeys in general). Concentrate on any intention you set for your prose.  In this case, one of my intentions for my trip to Portugal was to pick five random verbs each day and use them in my travel essay: 1) , , , , . √

Include the link in the comments below by Monday, February 25 at 1:00 p.m. EST.  When I write my post in response to this invitation on Tuesday, February 26, I’ll include your links in that post.