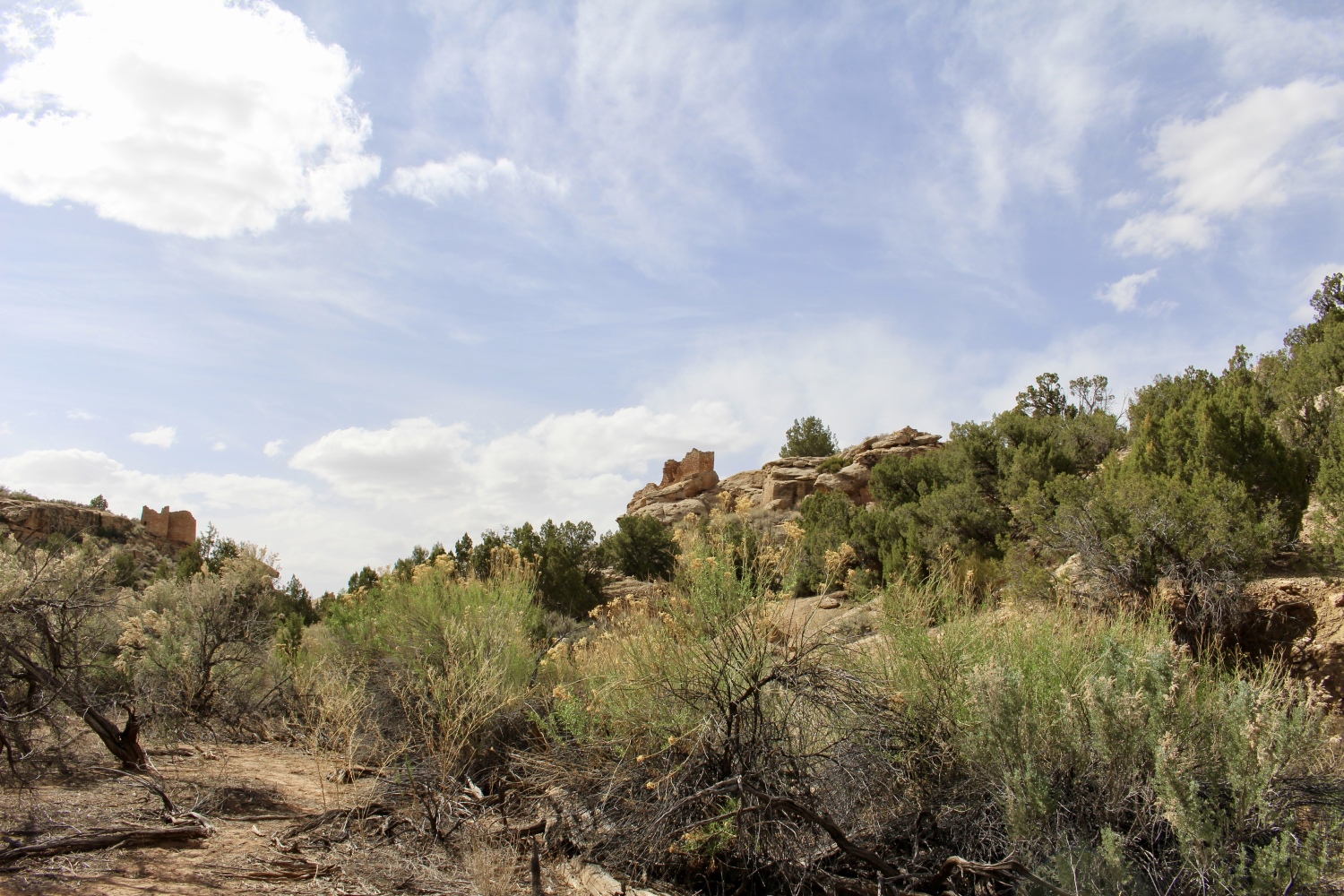 After leaving Natural Bridges National Monument, we headed east to Hovenweep National Monument.  It was quite a long drive through a barren landscape, but it was well worth the visit.  We got a far-away glimpse of Bears Ears National Monument along the way.  Several Native American groups, including the Navajos, Utes and Pueblos, consider this area sacred and include it in their oral traditions. Our President has directed that it be reduced substantially in size.

The landscape as we drove through the Navajo Nation was arid, all tans and browns with barely a speck of green.  Donkeys grazed on open range and rather skeletal-looking horses kept their heads down.  A strong wind bandied about swirls of red dust.  Derelict trailers squatted on acres of dirt.  A wooden sign for Church of God flapped from a signpost in the wind, while a white steeple perched atop a brown weathered barn like an afterthought. Small oil rigs bobbed up and down amidst sagebrush. It was a desolate drive.

horse on the way to Hovenweep

When we arrived at the Visitor’s Center, of course I had to get my passport sticker and cancellation stamp (see below).  We saw a young lady collecting stamps for the Junior Ranger program.  Wearing a straw hat, she brought to mind Mary Ann on Gilligan’s Island; her companion reminded us of the Professor. Later Mike said she probably had a hell of a time hanging on to that hat in the heady wind.

Hovenweep, which is Ute/Paiute for “deserted valley,” was once home to resourceful ancestors of today’s Pueblo Indian tribes. It was once a sizeable network of prehistoric villages. Many Pueblo people built their dwellings on canyon rims, often near springs and seeps near canyon heads. Some locations suggest the people were protecting something, if not themselves then perhaps the water – essential to desert-dwellers. By the 1200s, the population had grown dramatically.

Despite marginal growing conditions, ancestral Pueblo people raised corn, beans, squash and other crops in small fields and terraces, often using check dams for irrigation. They used solar calendars and astronomy to calculate growing seasons. They also created pottery, jewelry and clothing to improve and add color to their lives.  They were creative in building these rock, wood and mud mortar dwellings of various geometric shapes.

Perhaps drought, depleted resources, or internal strife accounted for the people’s sudden departure in the late 1200s. Today, the Hopi, Zuni and Rio Grande Pueblo tribes are considered the modern-day descendants of the people who created Hovenweep’s structures.

We set out to do the 2-mile Little Ruin Trail.  First we found the Stronghold House, named for its fortress-like appearance. This is actually the upper story of a large pueblo built on the slope below. People entered the house by way of hand-and-toe holds chipped into the rock, or possibly by a wooden ladder. 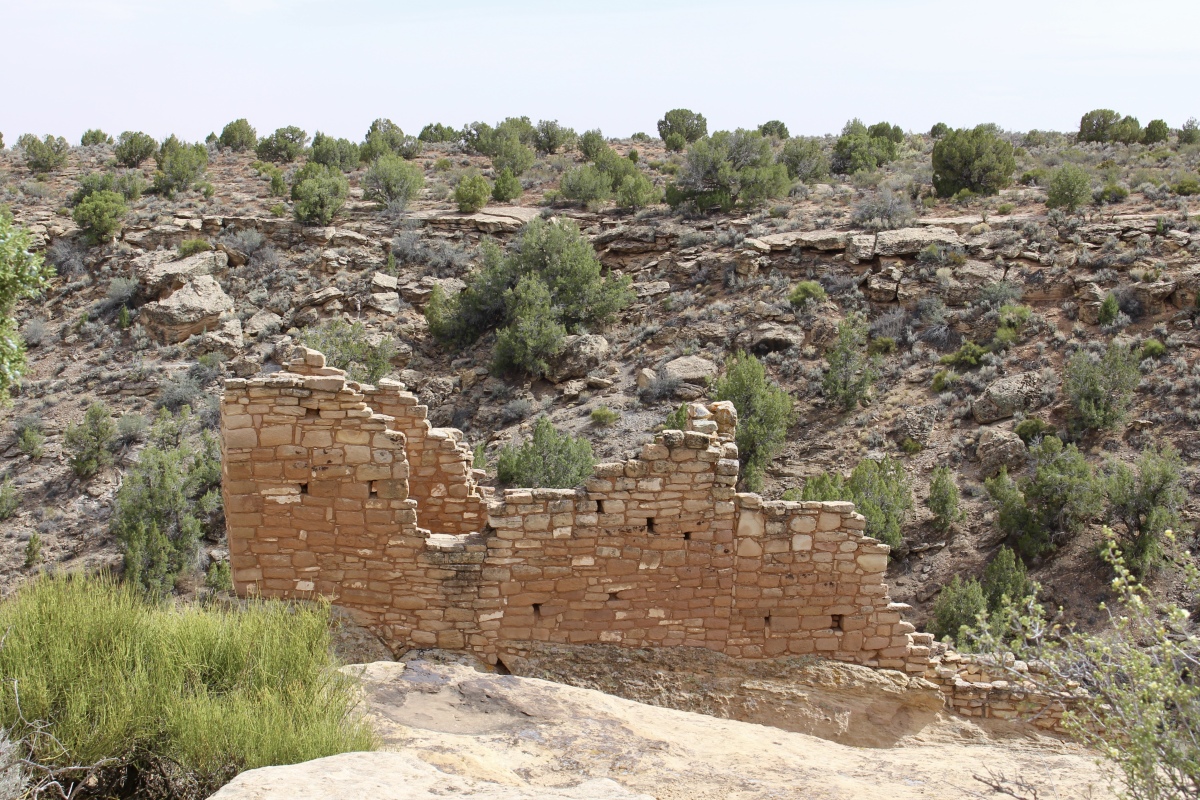 As the trail is a loop, we had to go down 80 feet into the Little Ruin Canyon, which was quite warm.  Around us, we found big basin sagebrush (in the sunflower family), Green Ephedra (Mormon Tea), Utah juniper and cliffrose.

the path through the canyon

broom in the canyon

From the canyon bottom, we could see the ruins of Hovenweep Castle on the ridge at the far end.

On the other side of the canyon, we found the Twin Towers.  Together they had 16 rooms.  The two buildings, one oval and one horseshoe-shaped, rose from the bedrock, their walls almost touching. 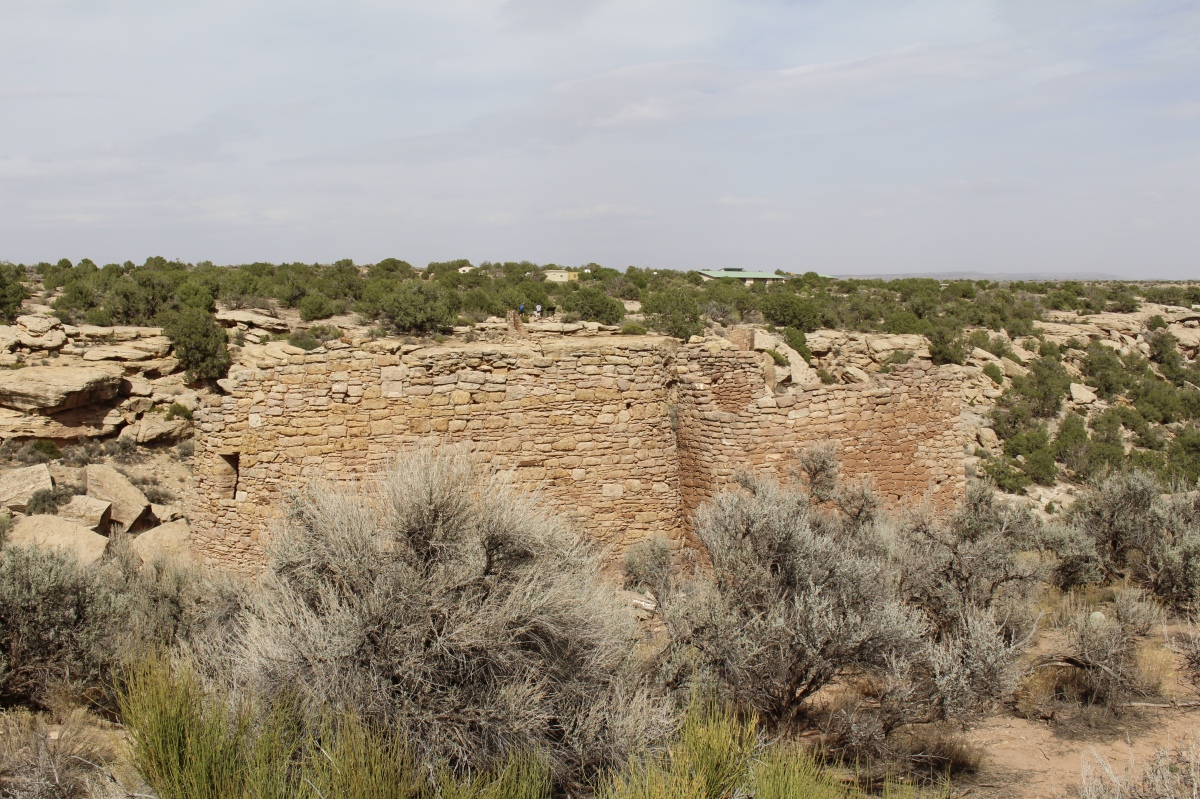 The Rimrock House lacks any room divisions, so it appears no one lived here. Rectangular in shape, it stands two stories high.  Small openings placed at unusual angles may have served as peepholes, observation ports for sun tracking, or ventilation.

In the canyon, we saw the remains of Round Tower.  It was almost perfectly circular and was likely two stories tall. 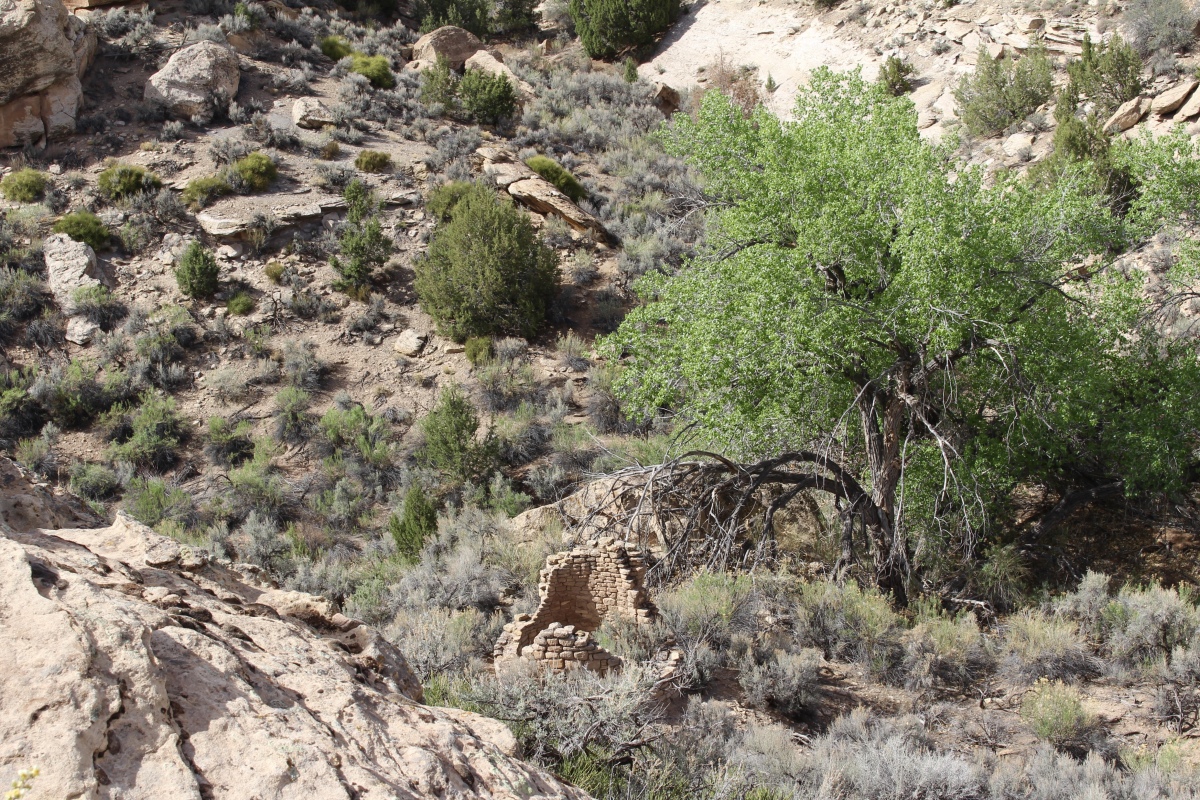 Hovenweep Castle stands at the end of the canyon. It consists of two D-shaped towers perched on the rim of Little Ruin Canyon. Logs in this ruin were cut in the year 1277 CE.  This was a residence, but not for royalty; rather, it housed farmers. 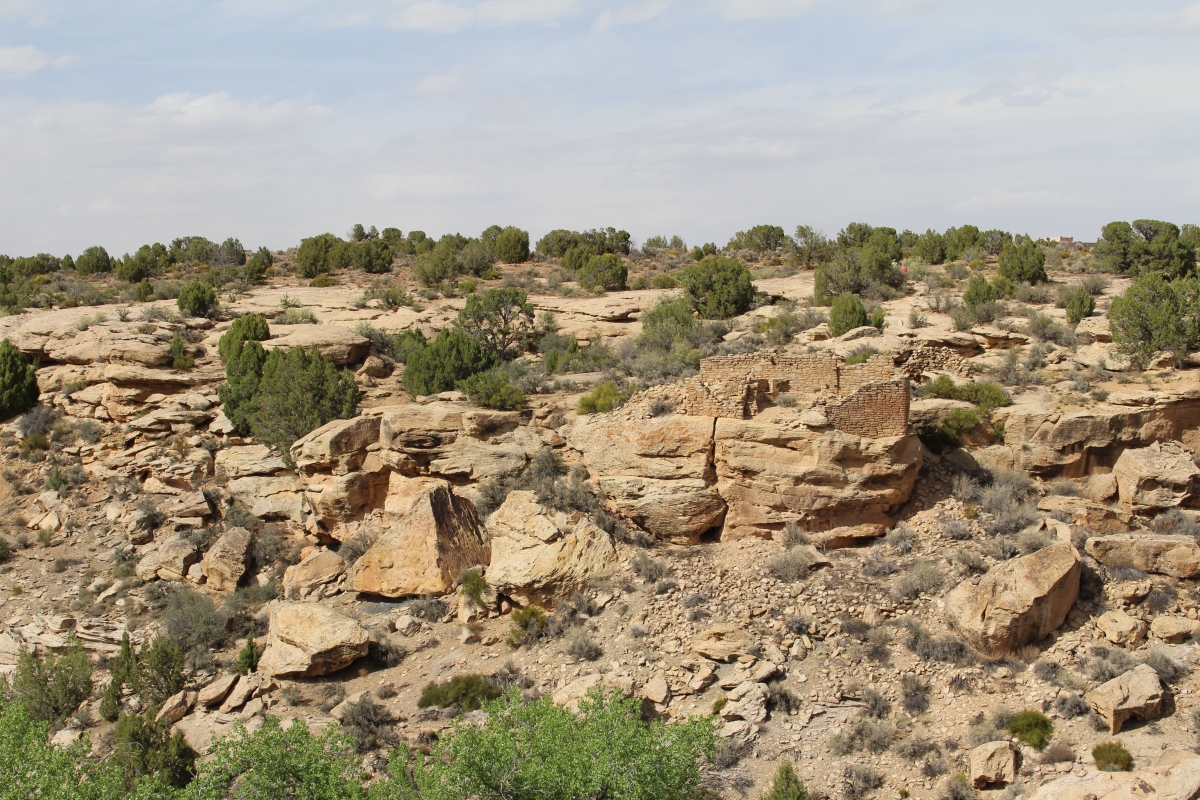 Hovenweep House was the center of one of the largest Pueblo villages in the Square Tower group.  The masons took great pains with the stonework.

From the canyon rim, we could see Tower Point at the end.  Here, people stored crops such as corn, beans and squash. A surplus harvest was essential for the Puebloans to get through years when crops failed. These granaries had to be tight and secure against rodents and seeping water. 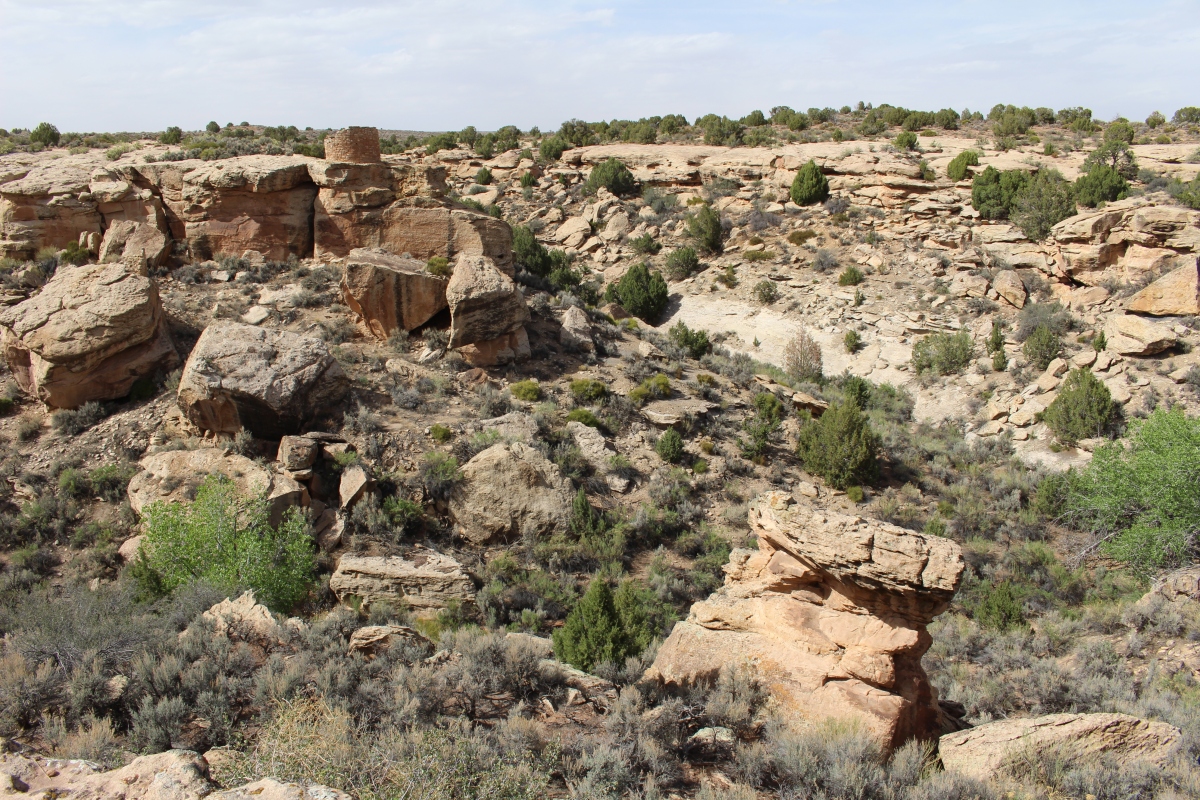 The two-story-tall Square Tower stands down in the canyon.  A kiva was excavated beside Square Tower. Beside the tower are large hackberry trees that tell of the seep that trickles under the alcove.  This precious permanent water source held the Square Tower settlement together. 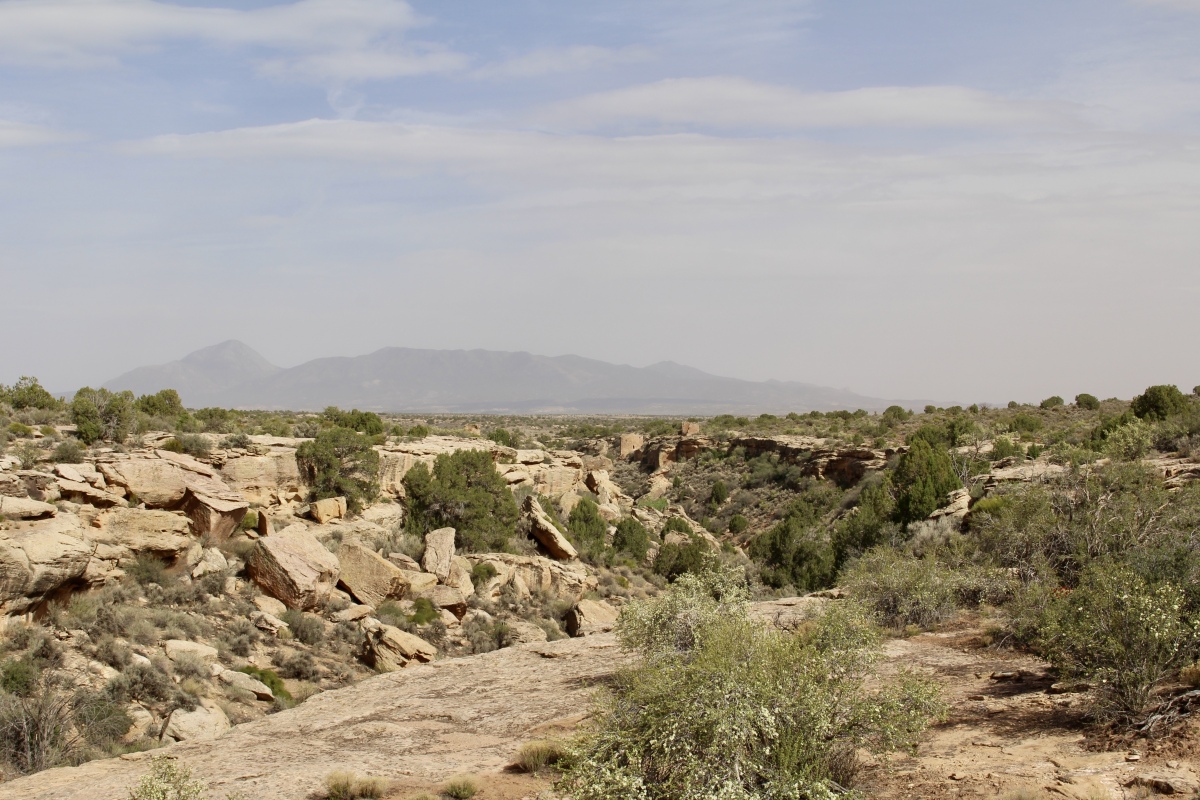 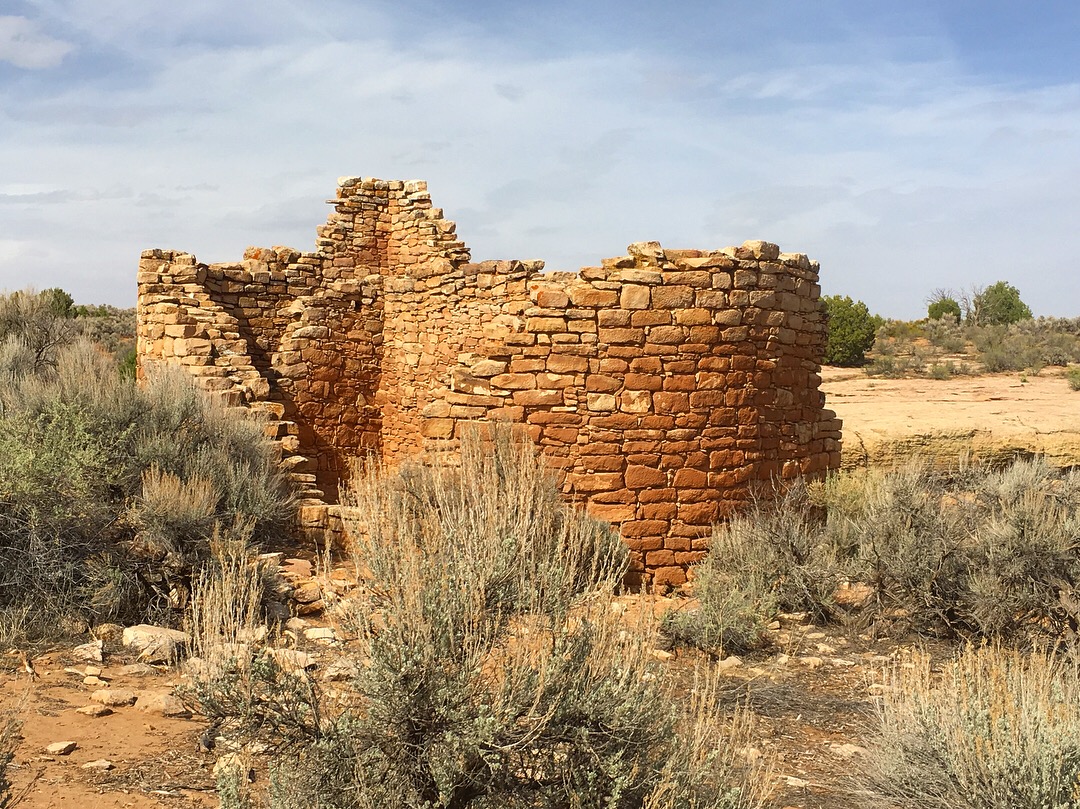 A line of rocks spanning a small streambed was a checkdam, built by the original early inhabitants.  Hovenweep farmers built a series of checkdams all over the mesa, used to slow water in flash floods, back up rich pockets of soil, or enhance the flow of springs below.  Others may have prevented washouts of crops planted in the canyon bottoms.

A great deal of the mesa top land was devoted to agriculture. Pueblo farmers had to plan for bad years by locating fields in favorable places, staggering plant times, and employing various water collection methods. 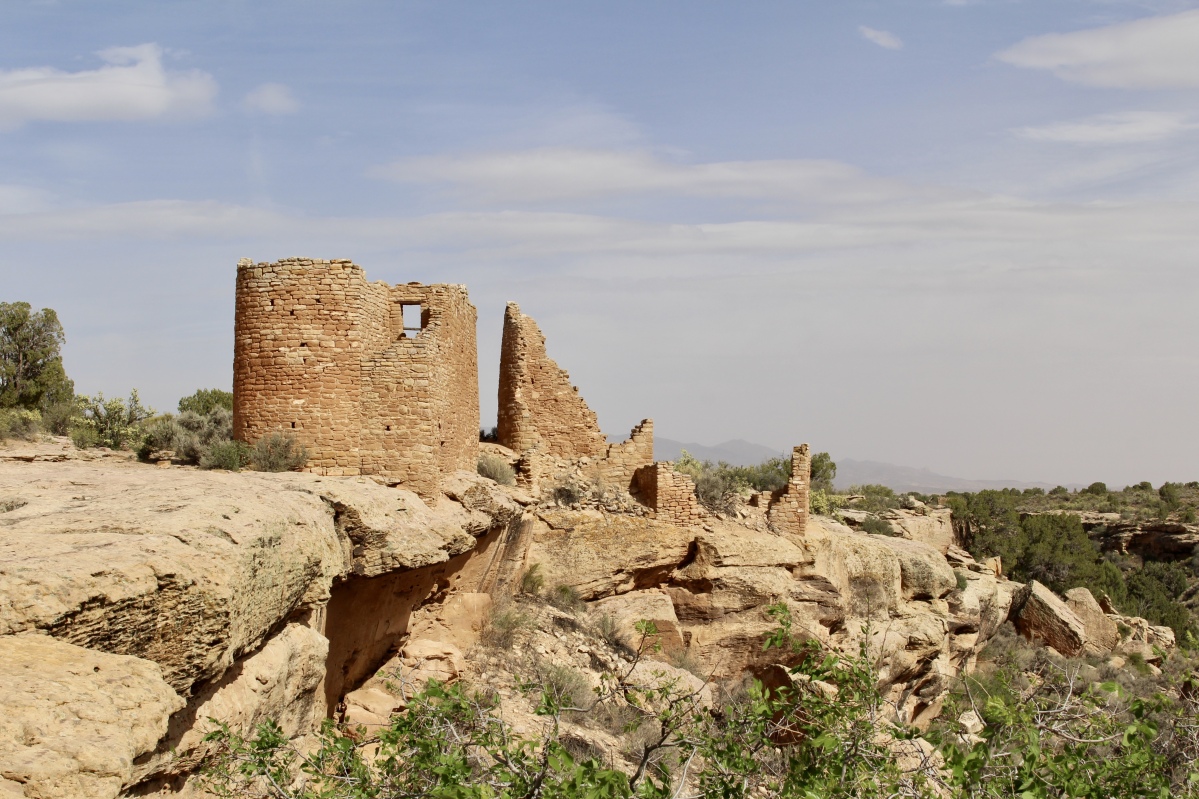 The most striking thing about Tower Point was its commanding view up and down Little Ruin Canyon. 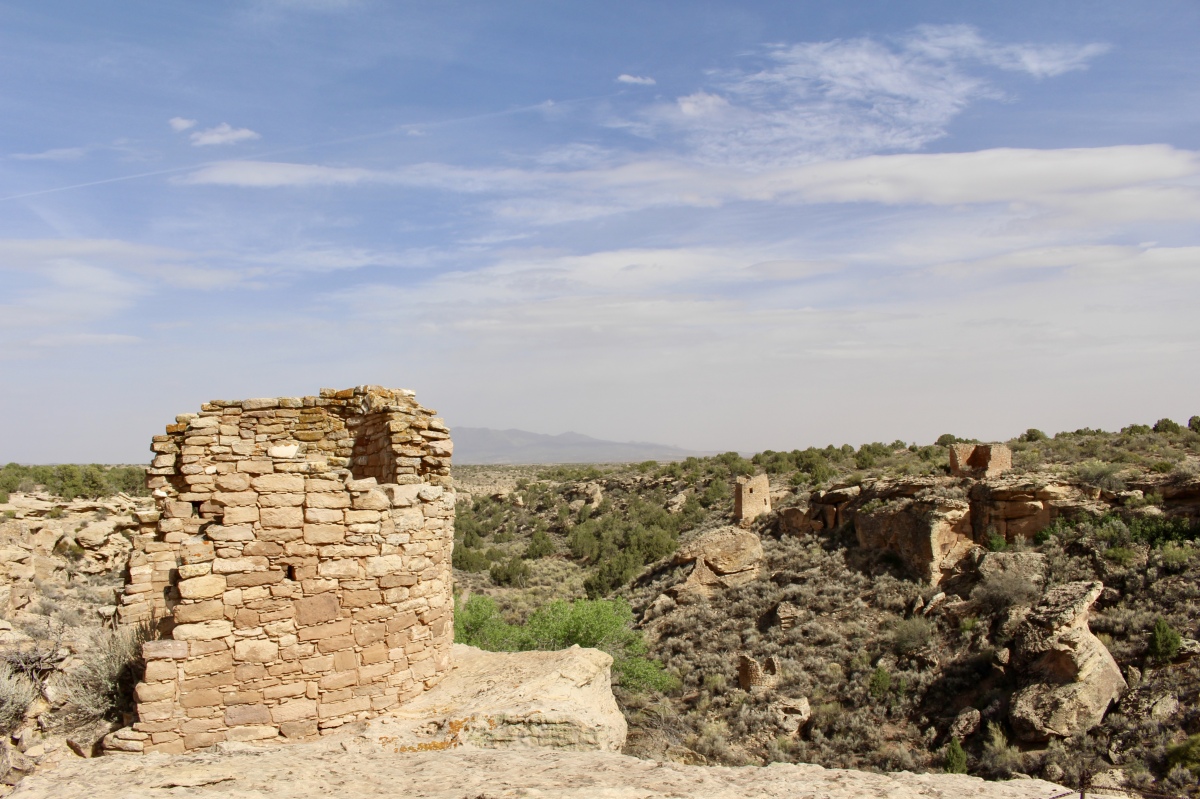 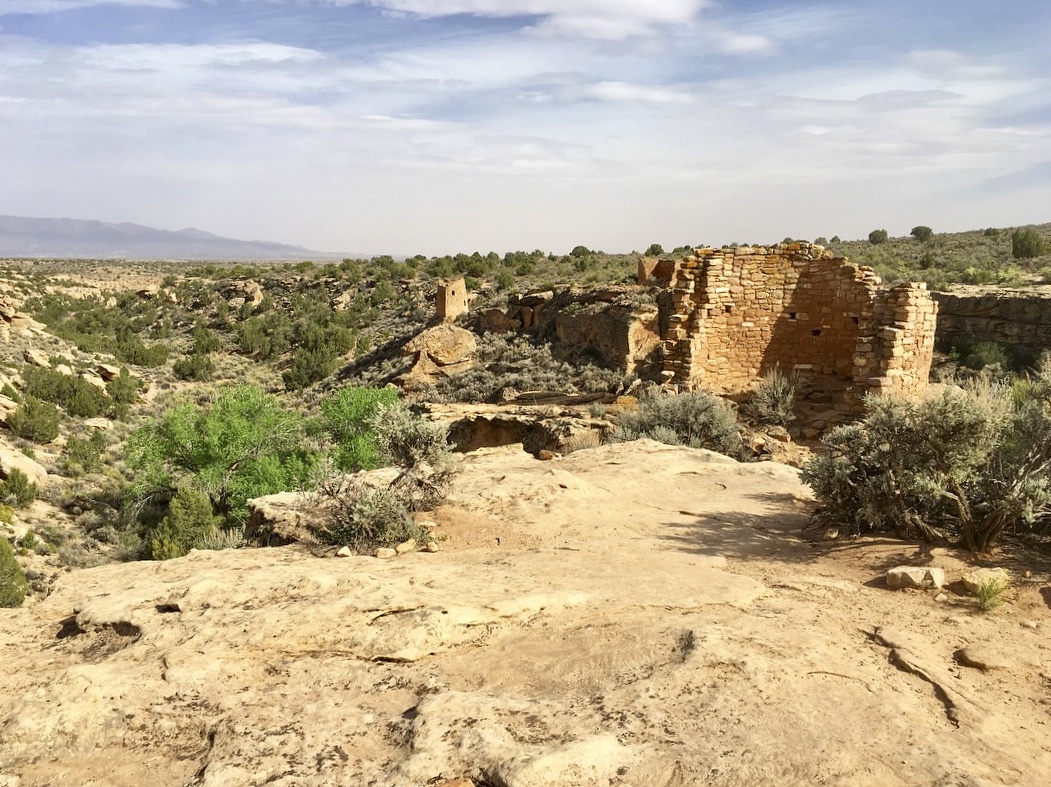 We made our way back to the Visitor’s Center, passing a Unit Type House.  This was a basic building plan found throughout the southwest, usually containing a few living and storage areas and one kiva. It likely served as home to a family or clan.

Eroded Boulder House incorporated the huge rock under which it sat as part of its roof and walls. 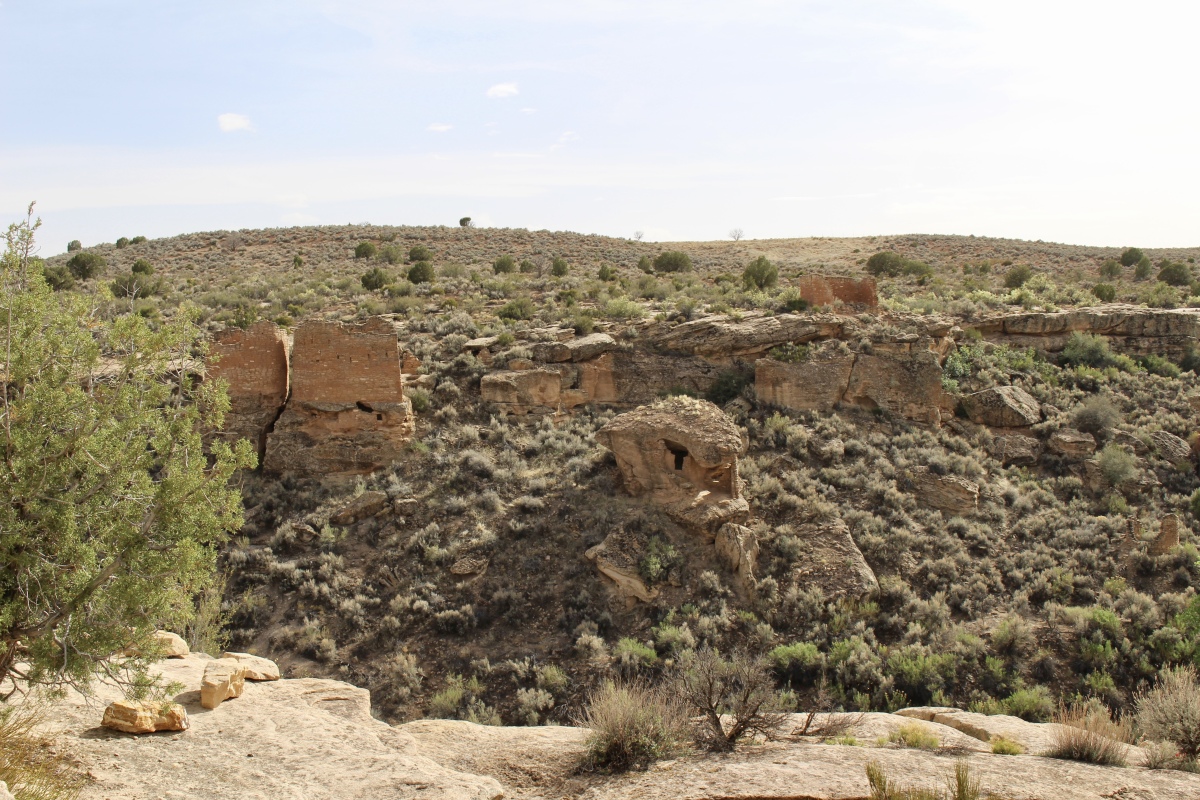 We finished the two-mile hike at 5:30.  It was a great hike, down into and up out of the canyon, then a mostly level loop around the rim over slickrock.

Here is my National Monument sticker and stamp for Hovenweep.  As I’d already filled in all the spaces for the Rocky Mountain Region in my first passport, I had to buy a second passport. I wonder how many I’ll need when all is said and done! 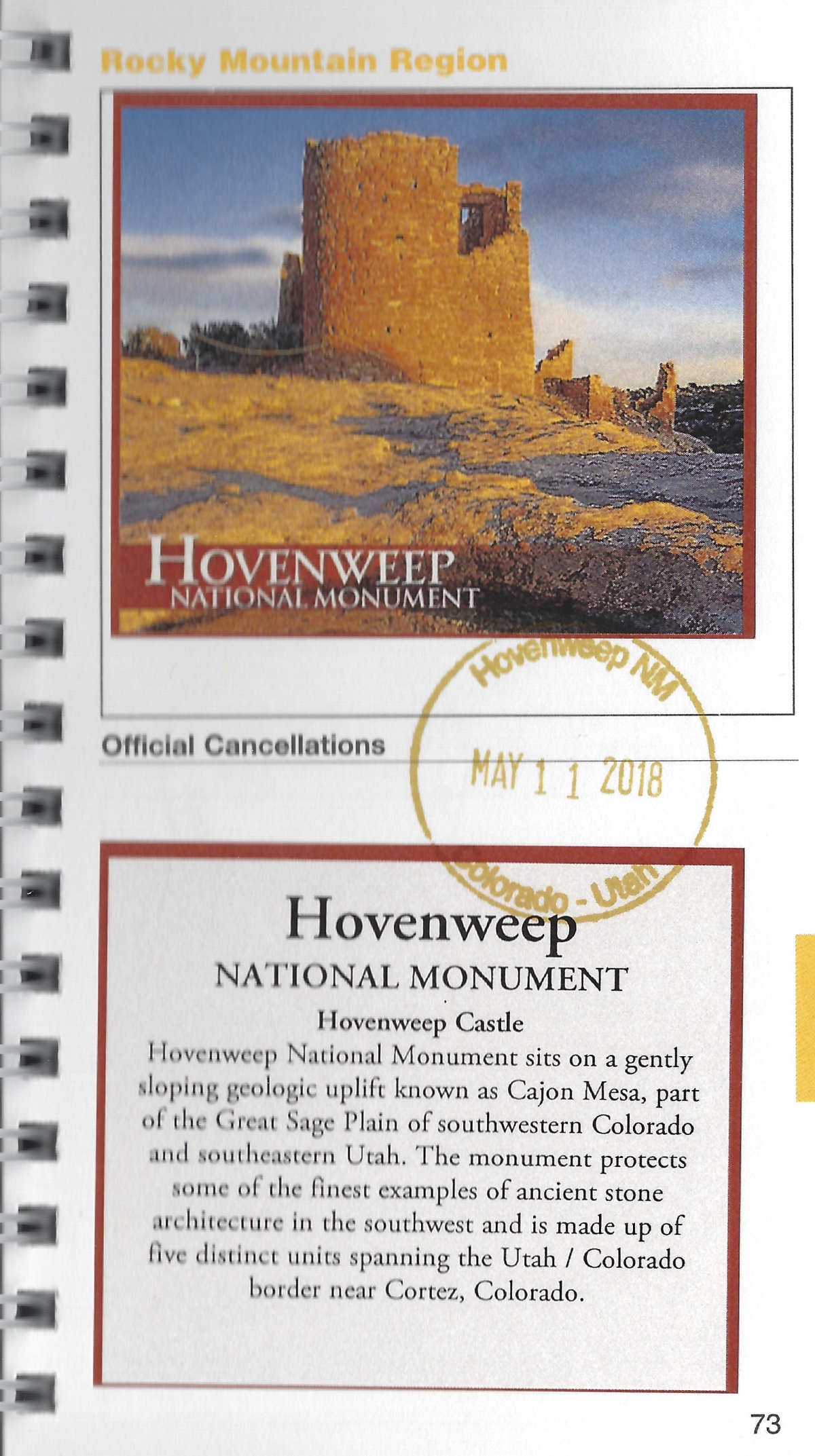 Travel, adventure and what to do