We drove up into Perugia and walked ever upward. Perugia, population 170,000, is the capital of Umbria. It is a majestic, handsome and wealthy city with trendy boutiques, upscale cafes, and grandiose architecture. A university city, it has a 30,000+ student population. 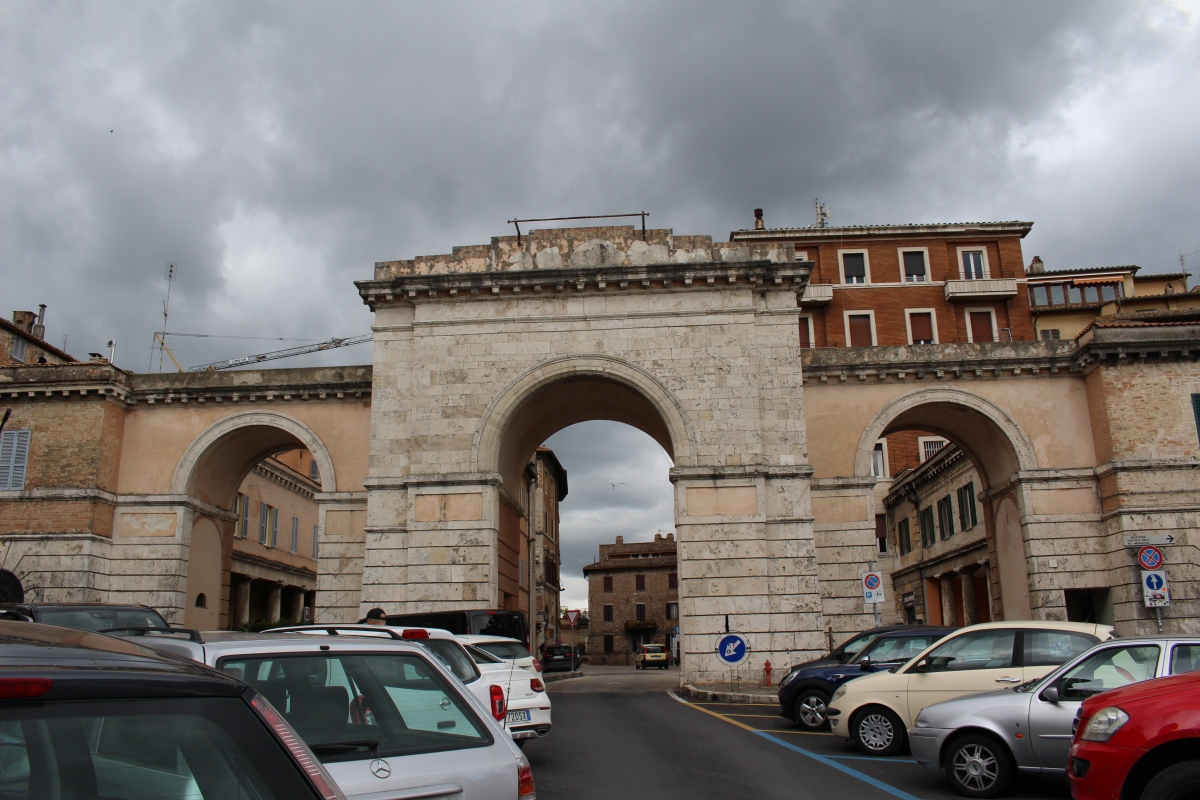 It was a cold 54°F and it started raining so we dropped into a pizzeria called ristorante ferrari where we shared umbricelli pasta with bacon and fava beans with pecorino cheese, accompanied by two glasses of red wine. I picked all the bacon out of my pasta and gave it to Mike. It was a nice cozy place to get out of the cold and rain for a while, with its brick barrel-vaulted room, like an old wine cellar. Bottles of wine for offer were everywhere in the regions of Umbria and Tuscany. 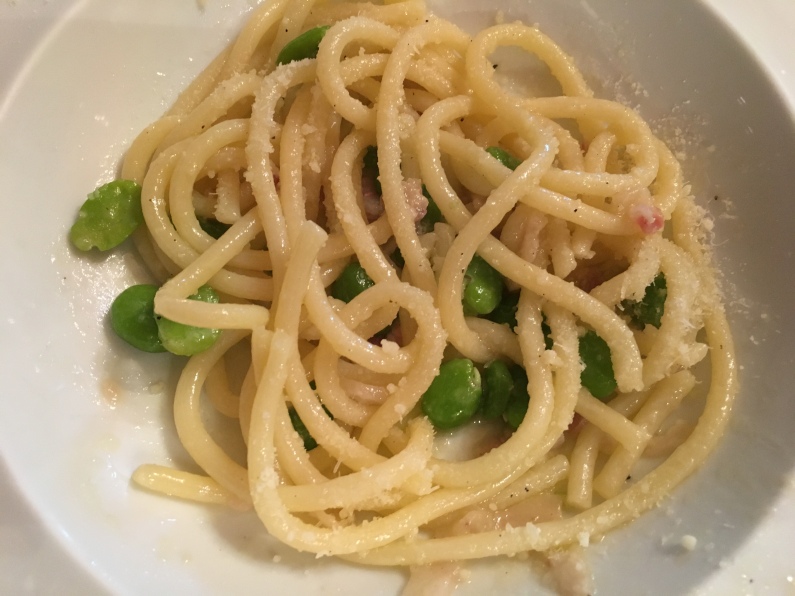 umbricelli pasta with bacon and fava beans with pecorino cheese

We went into the Duomo, Cattedrale di San Lorenzo, which overlooks Piazza IV Novembre.  The version seen today was begun in 1345 and building continued until 1587, although the main facade was never completed.

The Cathedral apparently has the Virgin Mary’s wedding ring, which was stolen by the Perugians in 1488 from the nearby town of Chiusi, according to Essential Italy: Fodor’s Travel.  The Virgin’s ring is kept high up — under 15 locks — in a red-curtained vault to the left of the entrance.  It is shown to the public on July 30 (the day it was brought to Perugia) and the second-to-last Sunday in January (Mary’s wedding day), according to Fodor’s. 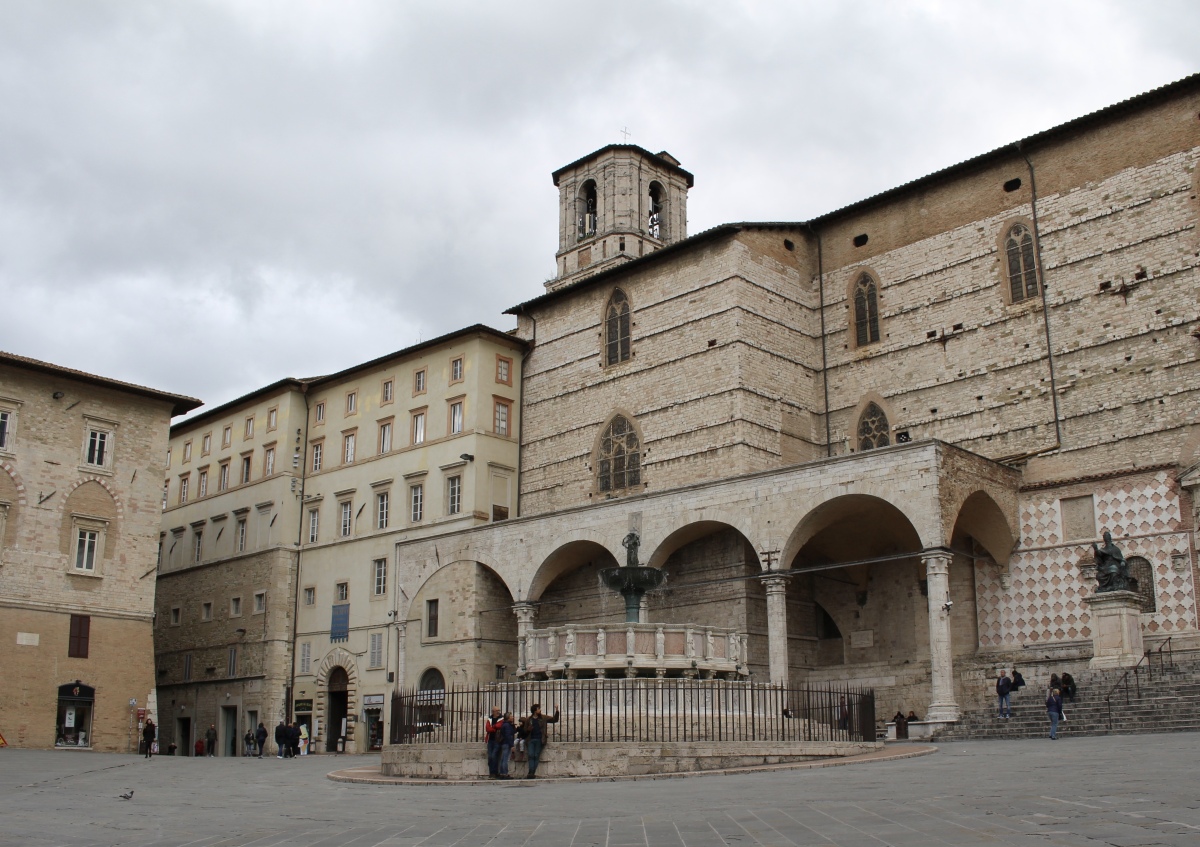 In the chapel, reserved for prayer, I snapped some photos as no one was using it. I got reprimanded by a man who motioned for me to delete the photos.  I deleted one but not all. 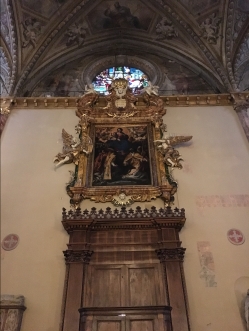 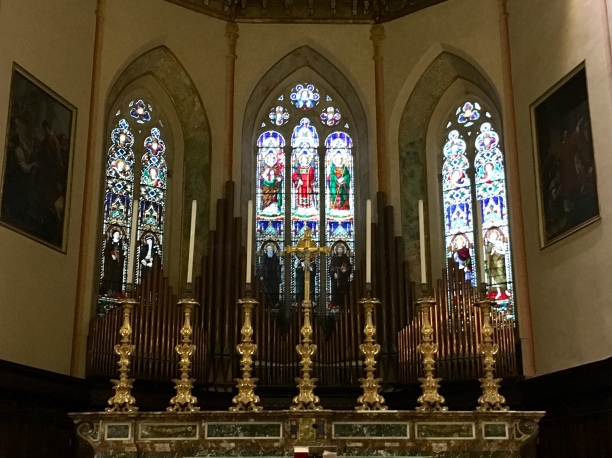 Outside the Duomo is the elaborate pink-and-white marble Fontana Maggiore, the centerpiece of Piazza IV Novembre, which dates from 1278.  It is adorned with scenes from the Old Testament, zodiac figures, a griffin, a lion, and symbols of the seven “liberal arts.” 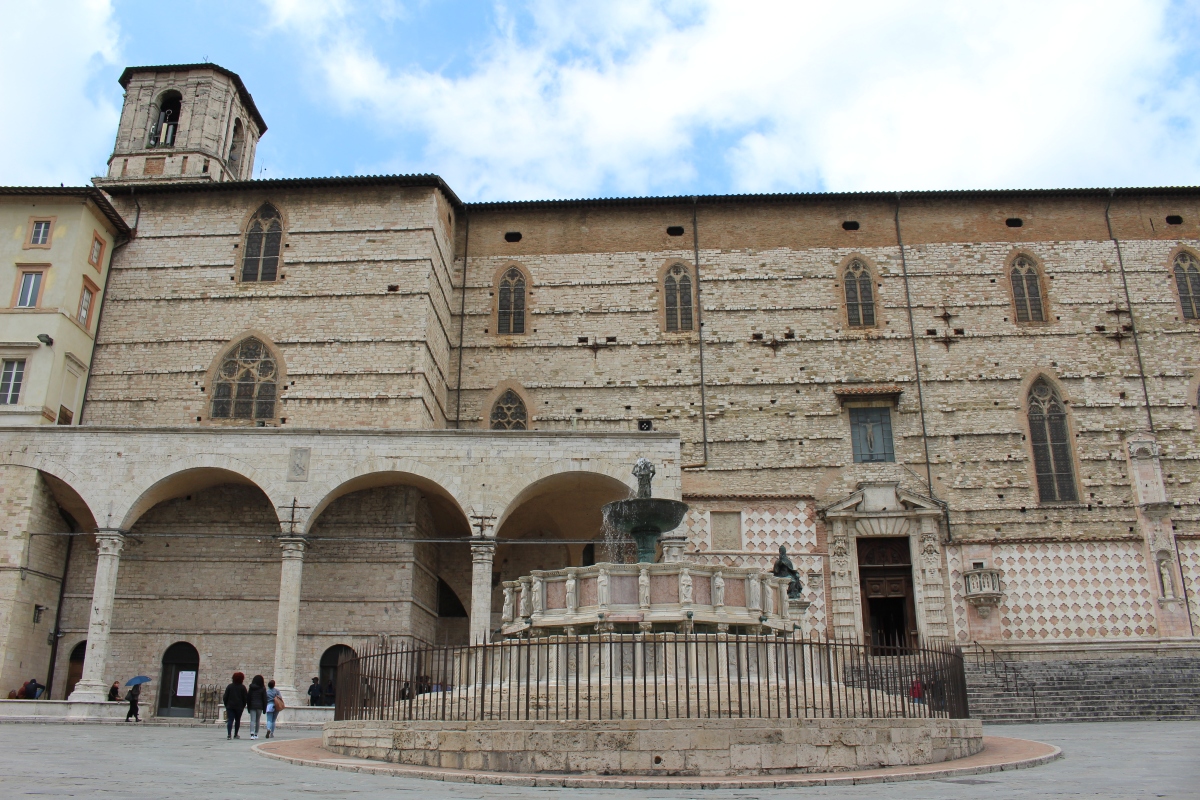 The Palazzo dei Priori is a historic Gothic palace, constructed between the 13th and 14th centuries, that was the seat of the priori (“first citizens”). This magistrature was established in Perugia in 1303. It is striking with its tripartite windows, ornamental portal and crenellations.  Now it houses the city’s main art gallery, the Galleria Nazionale dell’Umbria, the Nobile Collegio del Cambio, the Nobile Collegio della Mercanzia, and the Sala dei Notari.

We stopped for a little chocolate treat so I could use the bathroom after drinking all that wine and sparkling water. 🙂 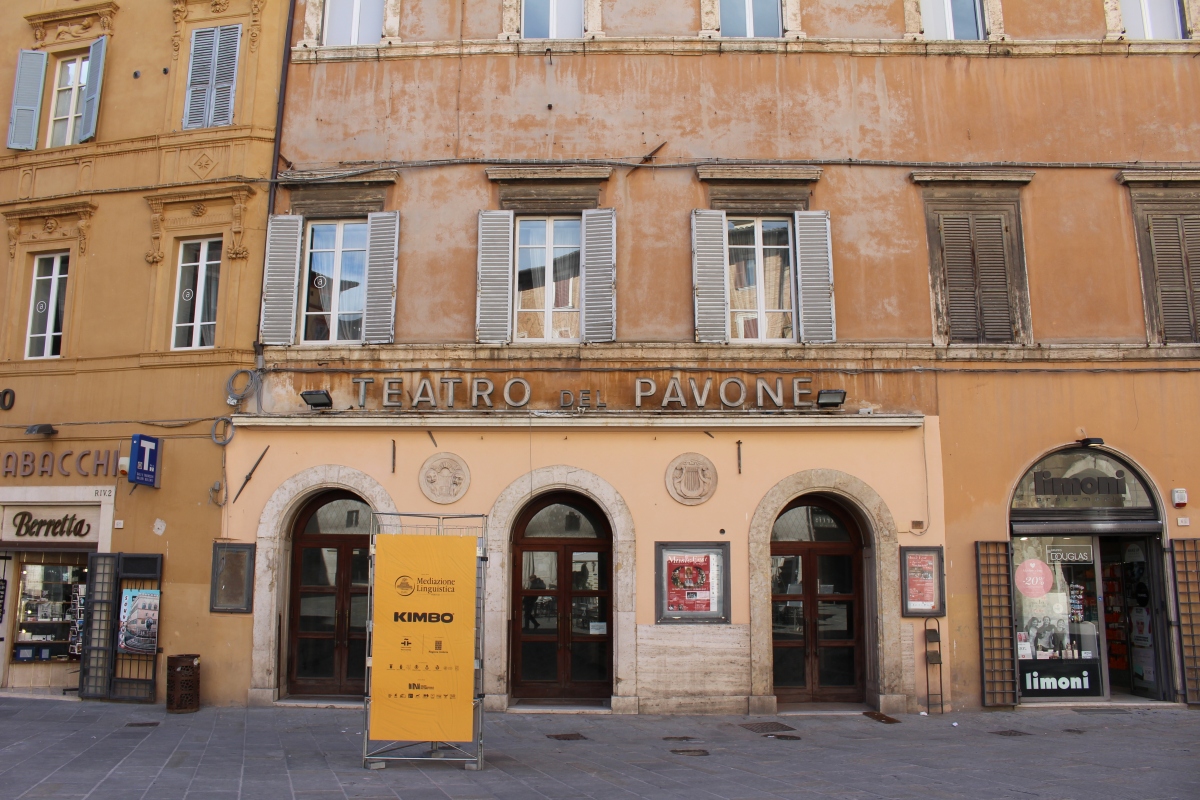 We dipped into DeSigual for what turned out to be a shopping spree. I got two cute shirts, one funky jean jacket with a patchwork of various fabrics, and a scarf.  The saleswoman was very creative and had great suggestions, so I ended up buying more than I would have on my own.  Mike was encouraging the whole thing, and sat watching on a stool as I tried things on.

my purchases from DeSigual

We walked around the edge of the wall for views into the valley. 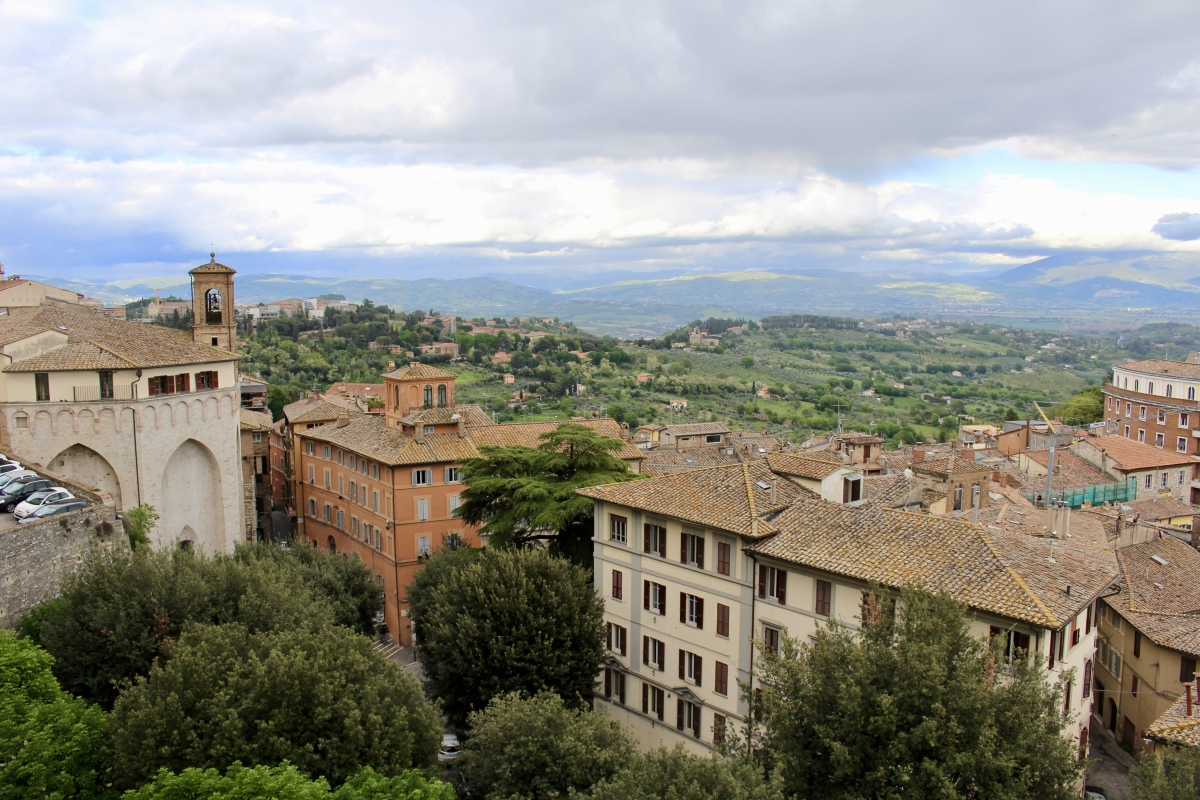 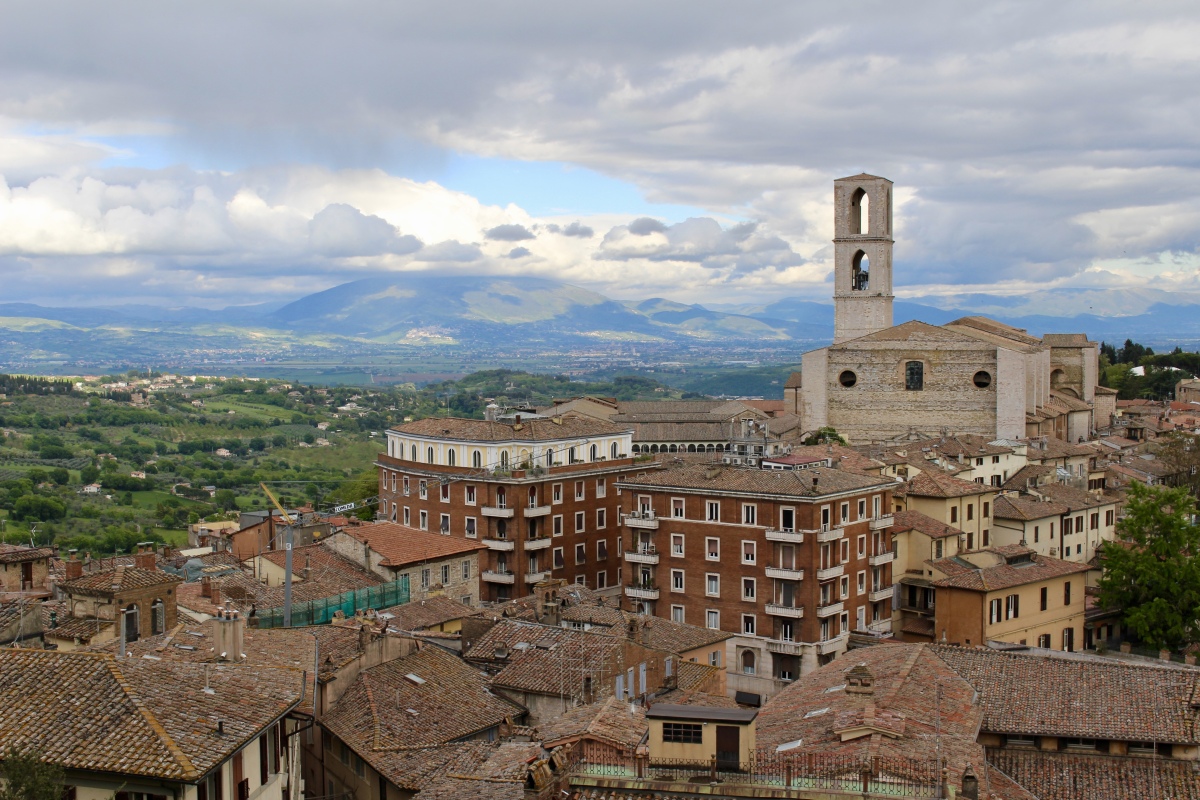 We returned to our apartment for wine then we decided to go to the PAM Superstore and get breakfast groceries: yogurt, bananas, strawberries, crackers, prosciutto, orange juice, and more.

the area around our Airbnb

After asking, “Dov’è il ristorante più vicino?” (where is the nearest restaurant?), we went out to dinner at Al Battibecco ristorante / pizzeria. It was a family place with a vast interior, a grass playground outside, and tables covered in checkered tablecloths.

Whole families were eating huge plates of breaded fish. We wondered if it was a regional specialty, but no one spoke English enough to tell us.

They brought us two glasses of prosecco, and we also had two glasses of wine. Mike ordered a kind of caci e pepe and I had imbrecciata, an Umbrian soup of beans and grains, delicately flavored with local herbs. 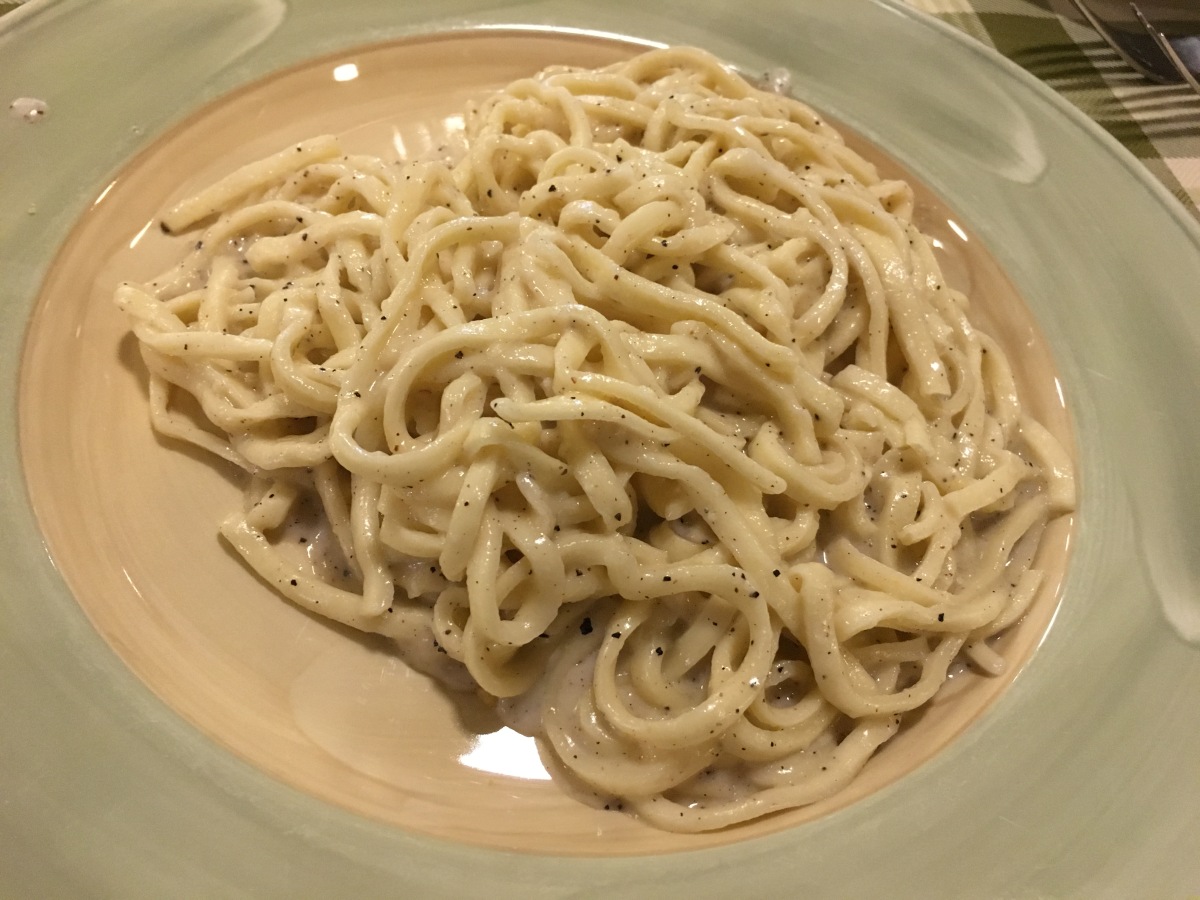 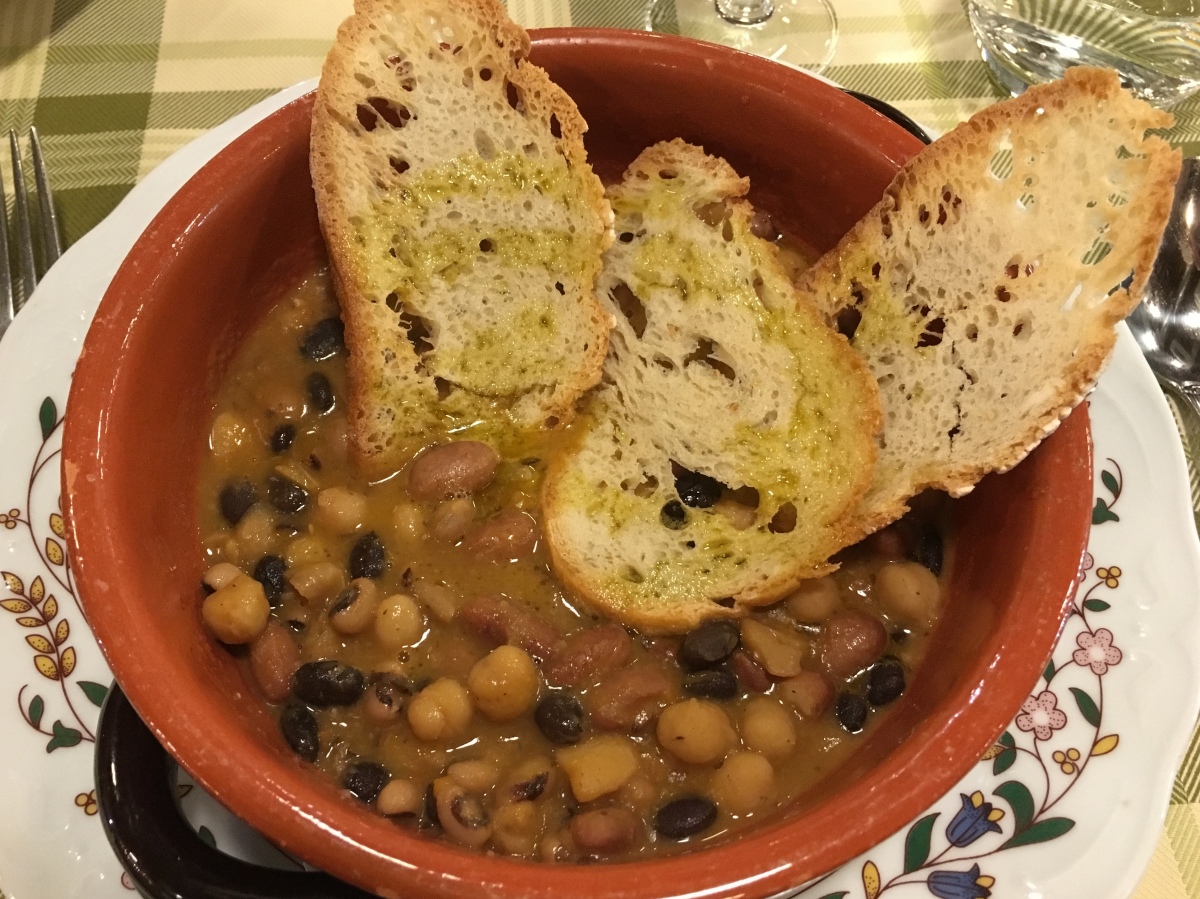 imbrecciata, an Umbrian soup of beans and grains

We also had a dessert of vanilla pudding with cherries served in a jar.  Our waitress was a goofy face-making waitress who spoke no English, but she was very friendly. 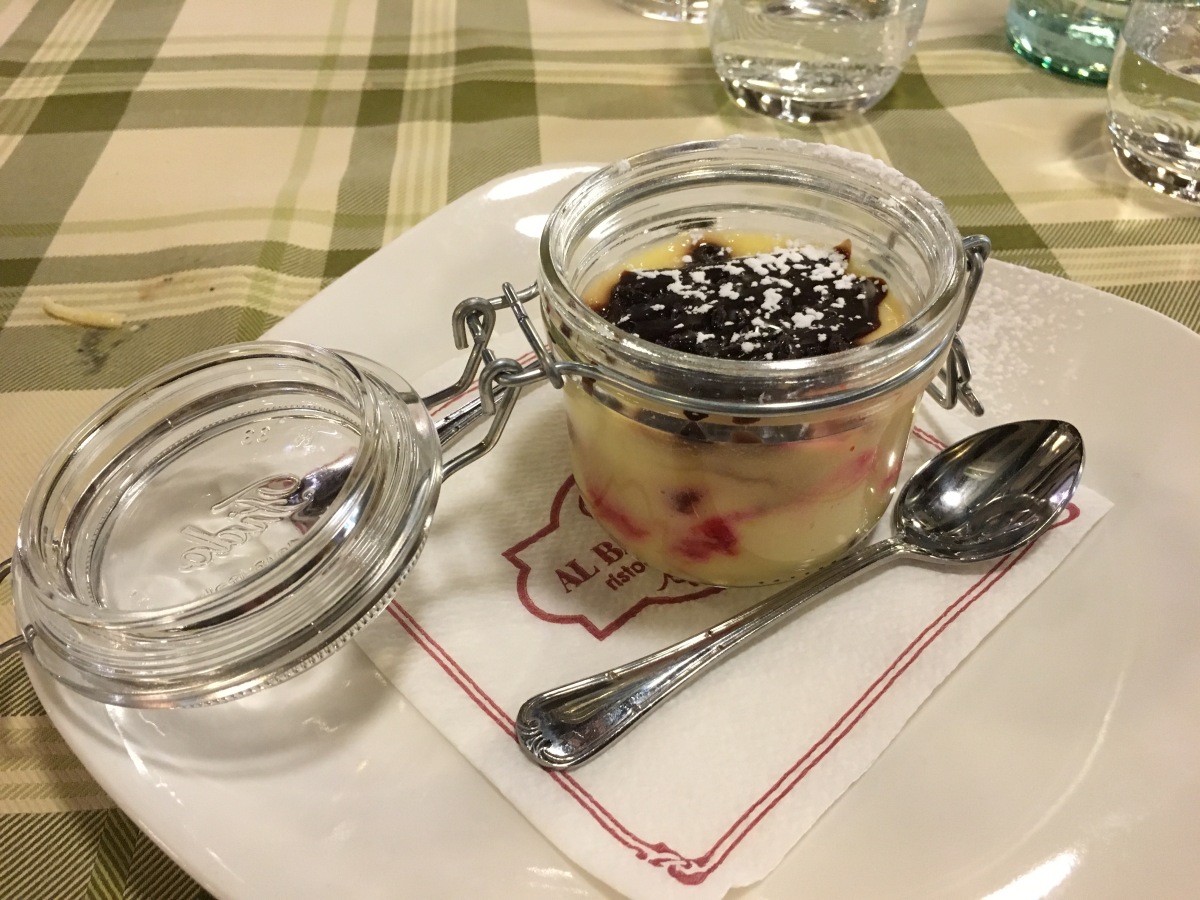 The next day, we would explore Assisi and Spello.