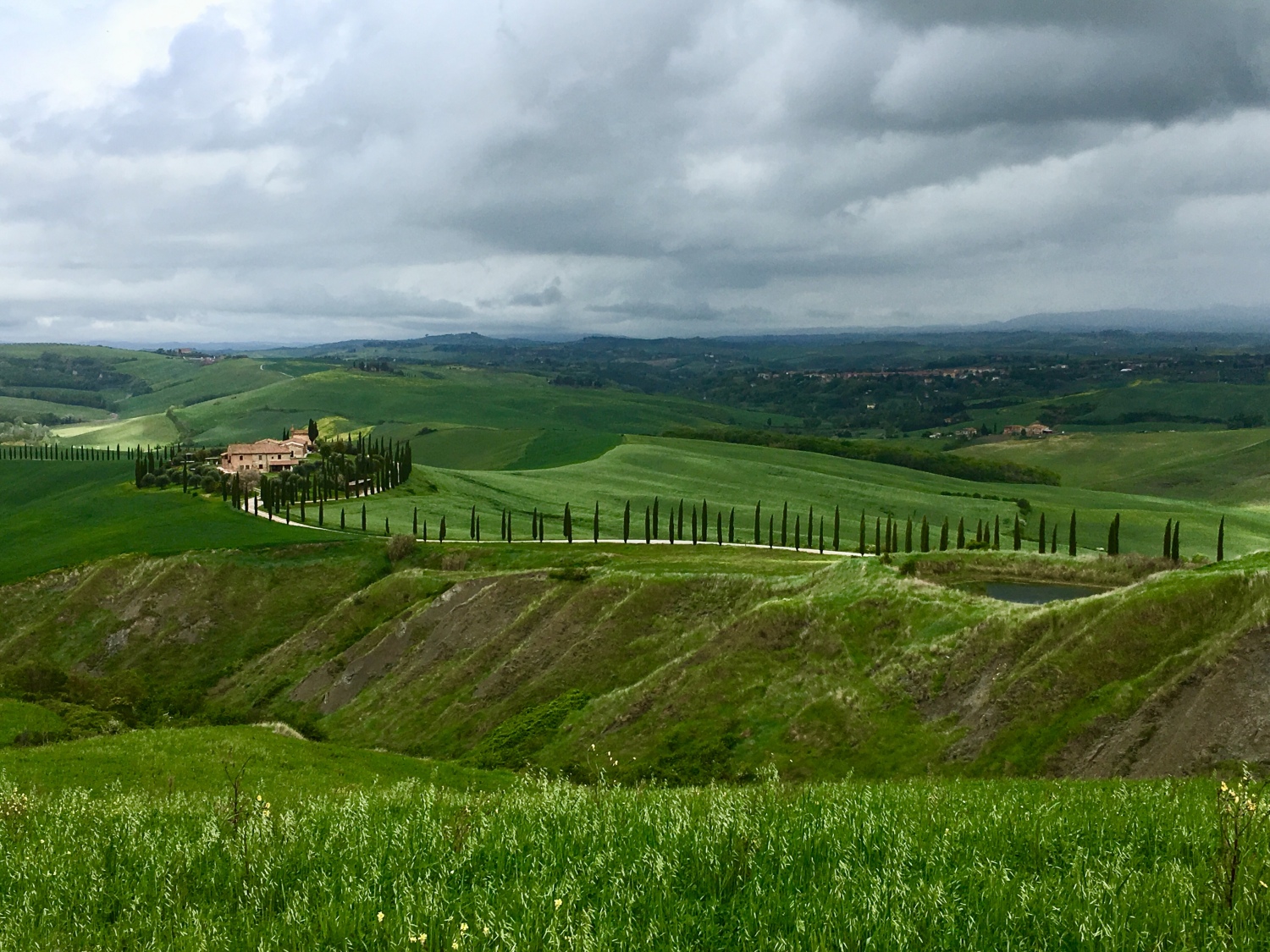 After leaving Abbazia di Monte Oliveto Maggiore, we continued driving along a ridge where we could see the valley far below on both sides.  Even though it was gloomy, the scenery was beautiful with lush green rolling hills, yellow rapeseed, cypress trees lining serpentine driveways, ridges, poppies and scattered umbrella pines.  White and pink flowering trees bloomed all around us, possibly Hawthornes.  It was stunning and I kept asking Mike to pull over so I could take pictures. 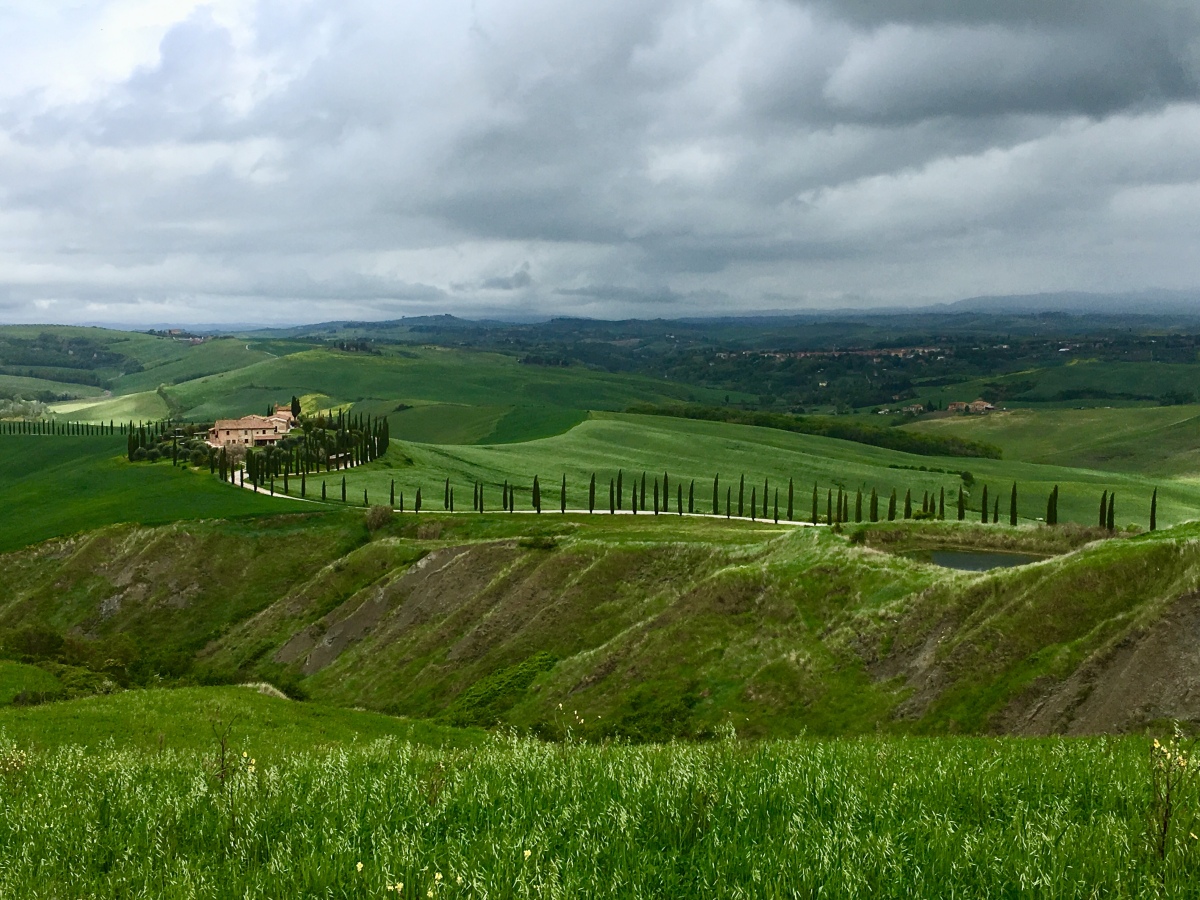 Next, we drove down S451 to Buonconvento and then on a smaller rural road among picturesque vineyards to Montalcino.  It was gloomy, sprinkling, and getting colder.  The town seemed deserted, although there were cars in the parking lot and cars parked on the streets.

The tiny town claims an Etruscan past and was fairly well traveled as it was directly on the route from Siena to Rome. It was briefly autonomous during the Middle Ages until 1201, when it fell under the orbit of Siena. Today, Montalcino’s claim to fame is that it produces Brunello di Montalcino, one of Italy’s most well-regarded red wines (Fodor’s Travel: Essential Italy 2019).

In the town, we climbed ever upward and hardly saw a soul in sight.  We passed the 14th century Duomo di Montalcino without knowing what it was. It was elevated to the status of cathedral in 1462 by Pope Pius II.  It was demolished and rebuilt between 1818 and 1832 in the Neo-Classical style. It has a porch with six Ionic columns and entablature. The bell tower dates from the eighteenth century. 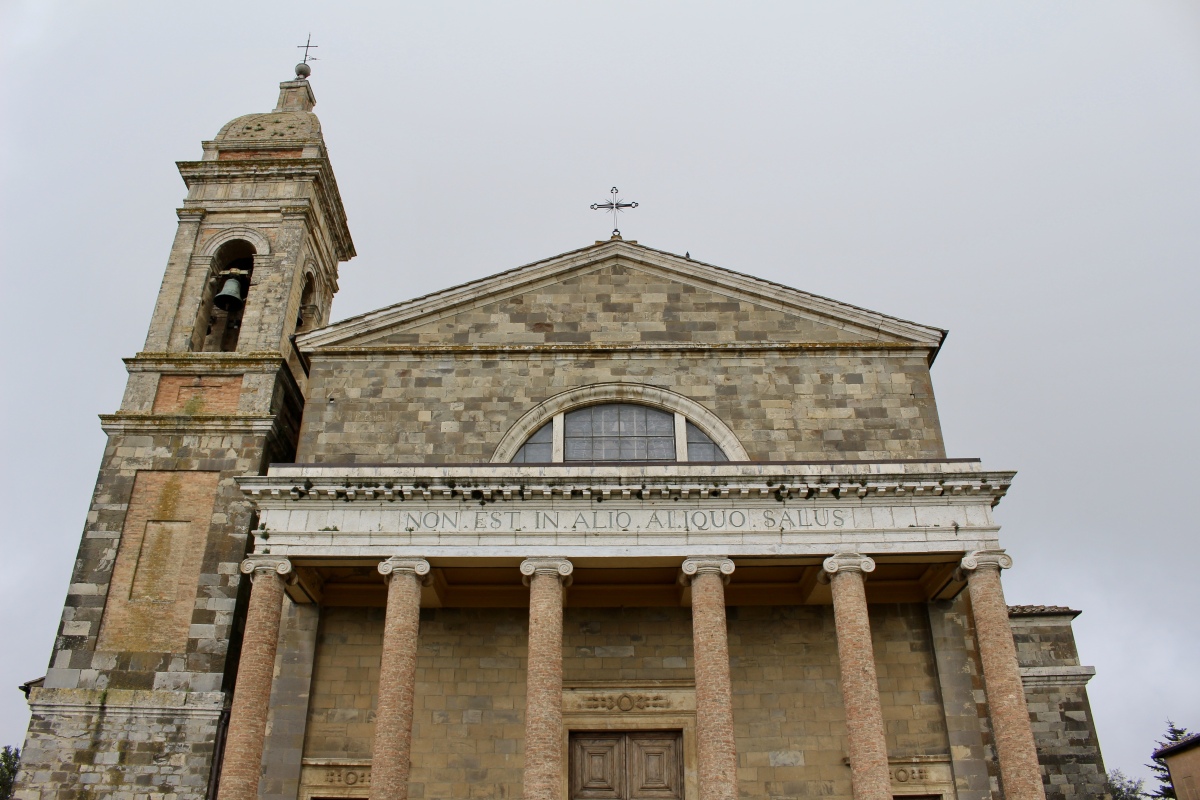 We stopped in one small cafe but it was booked. It seemed everyone was huddling inside to get out of the rain.  Then we moseyed down the street to the next available cafe, Caffé la Fortezza, where I ordered ravioli with spinach and ricotta cheese and Mike ordered tagliatelle with wild boar sauce. I sampled a Brunello wine – Camigliano 2013 and Mike sampled one too. 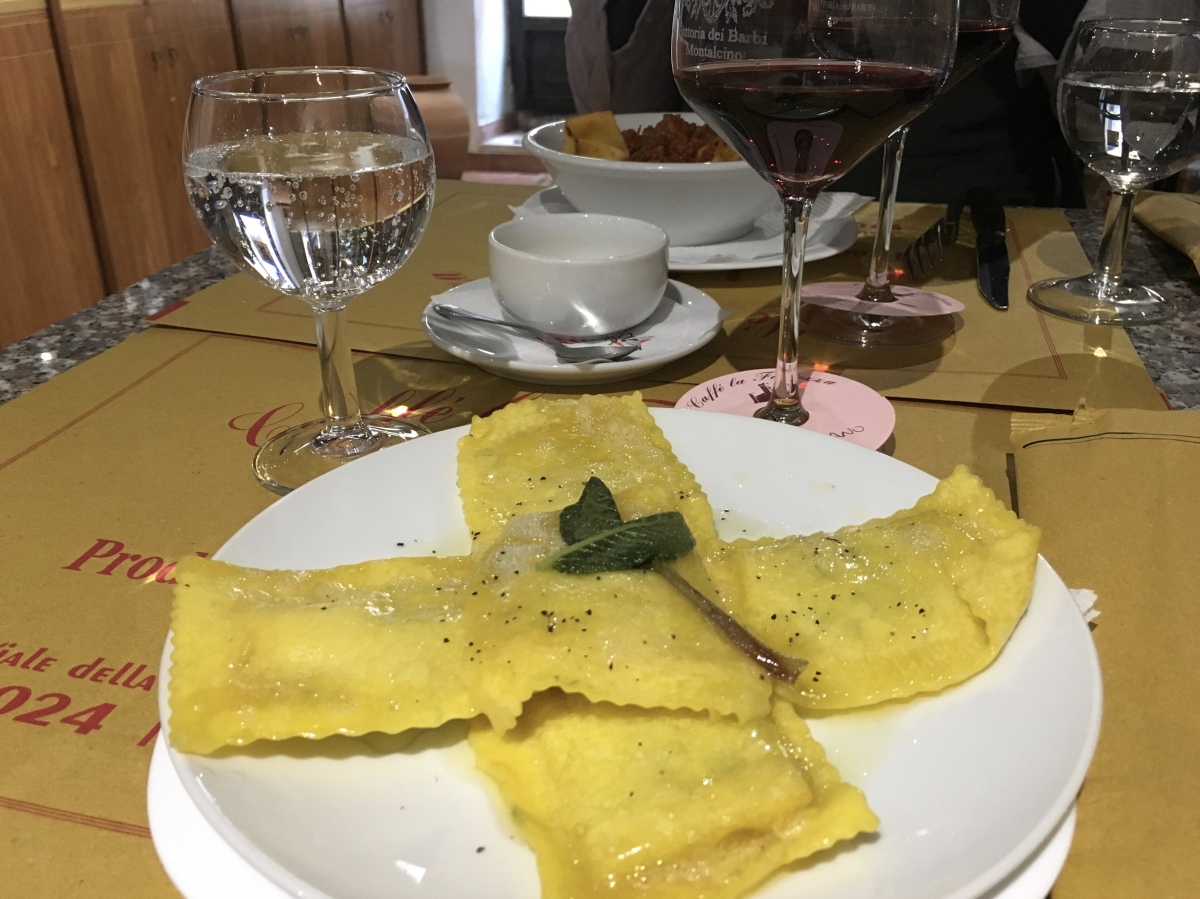 ravioli with spinach and ricotta cheese

Brunello di Montalcino is among Italy’s finest and most expensive wines, made from 100% Sangiovese Grosso (aka Brunello) grapes.  It’s smooth, dry and aged for a minimum of two years in wood casks, plus an additional four months in the bottle, according to Rick Steves Best of Italy.

After lunch, we walked around the town to the 14th-century La Fortezza, which provided refuge to what remained of the Sienese army during the Florentine conquest of 1555. It was expanded under the Medici dukes and now dominates Montalcino’s skyline. 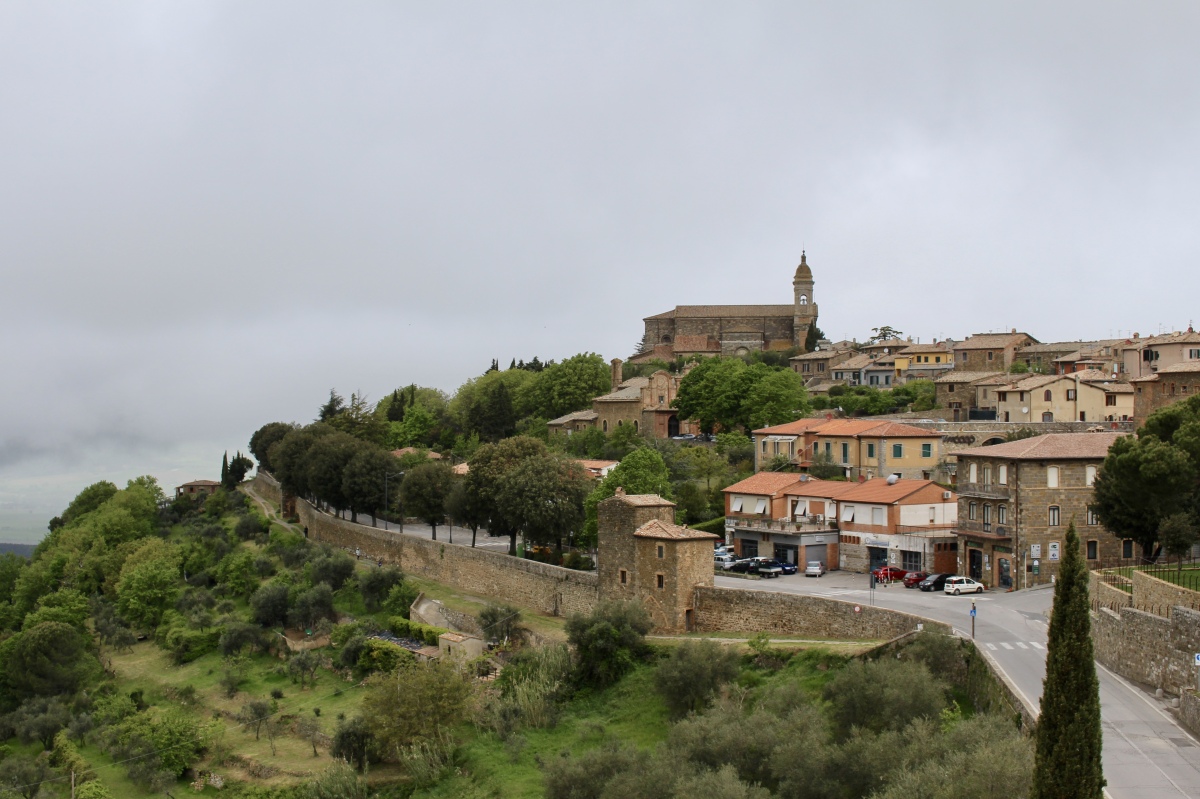 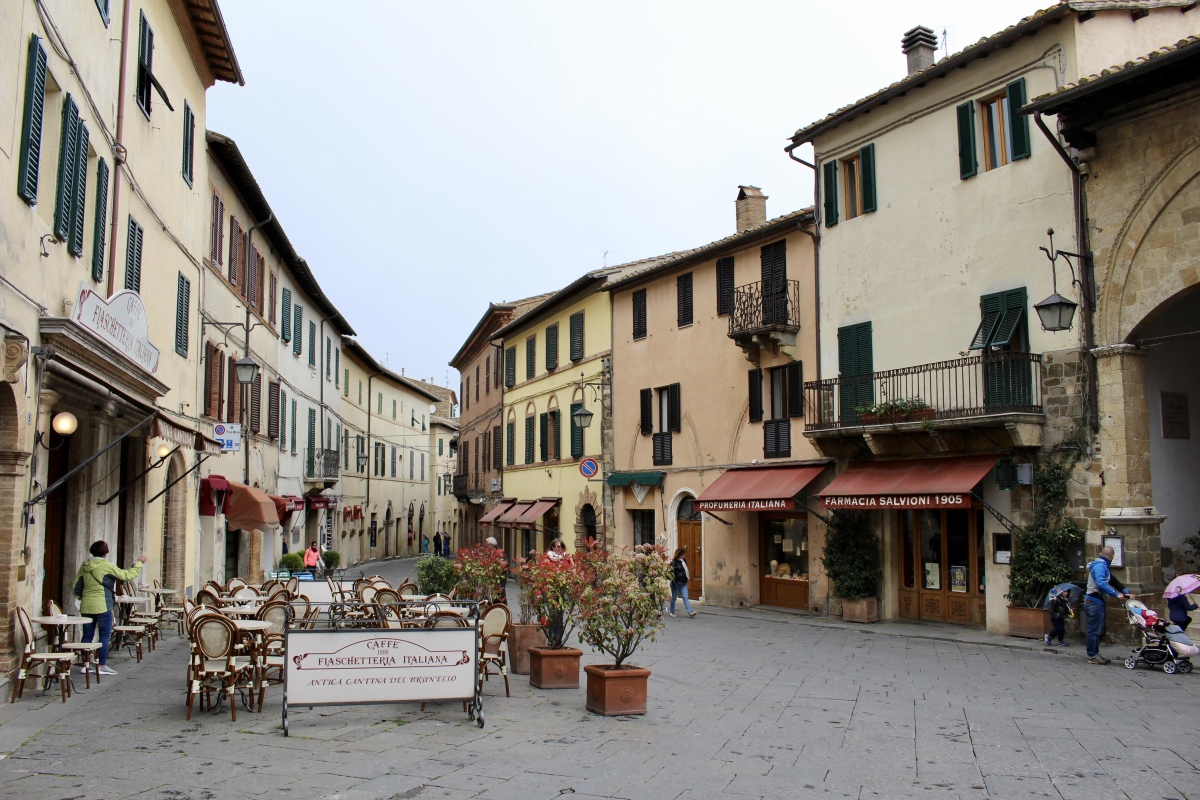 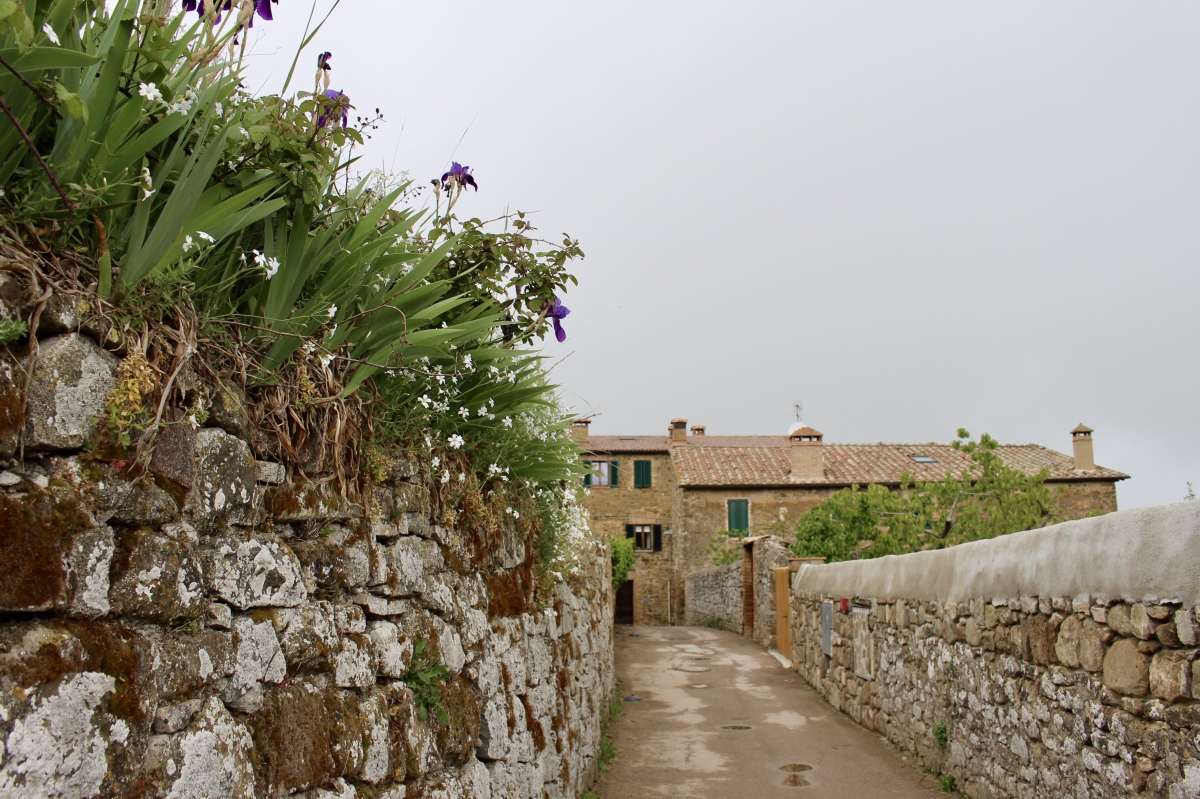 As we walked back through the town to the lower parking lot, we ended up having to climb back uphill again. This time, we passed the backside of the Duomo di Montalcino. 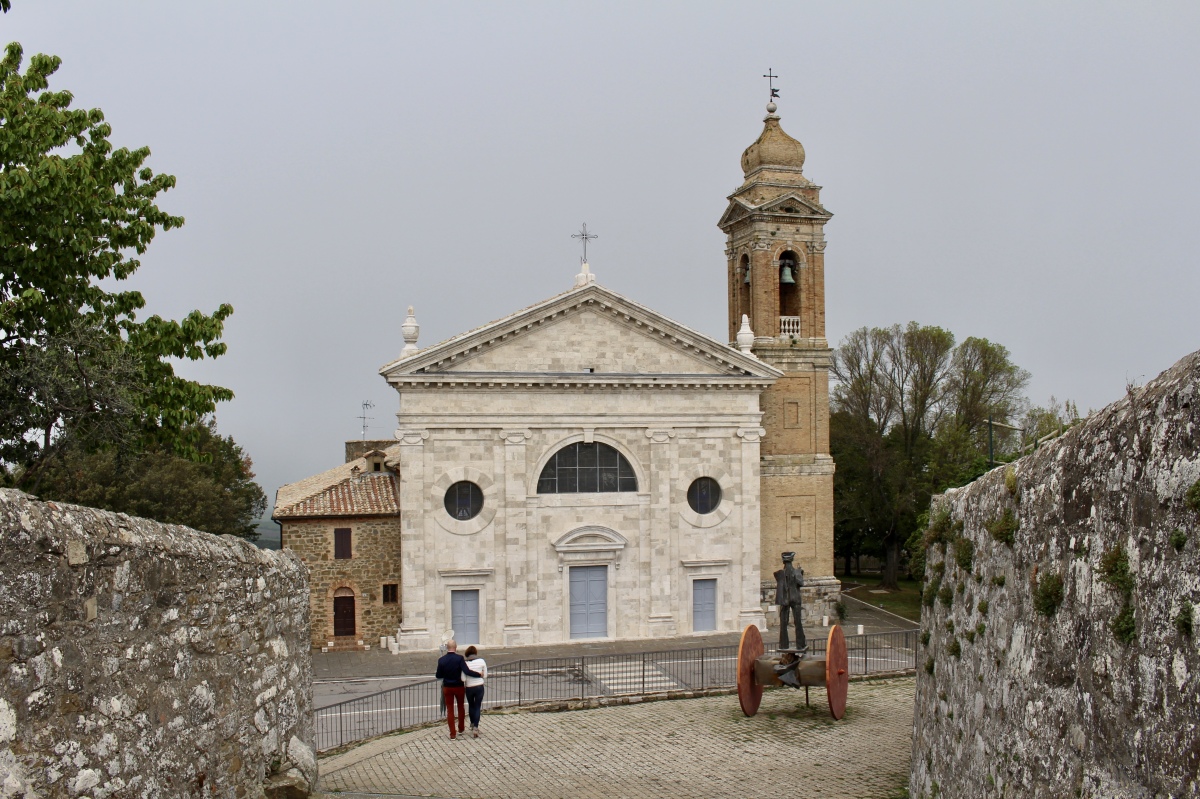 We were on our way to Sant’ Antimo.