Our little encampment in the desert didn’t have any bathrooms nearby, so in the middle of the night when I woke up needing to use a facility, I had to traipse across an expanse of icy sand under a canopy of stars.  I found the vast and silent sky and the sameness of the terrain disorienting.

I had heard what sounded like a whippoorwill before I dozed off, and again when the sun rose.  A lively goodnight and good morning. It had been freezing all night, but as soon as the sun came up, the tent heated up like a tagine fresh out of the oven.

I talked with Father Anthony over a breakfast of a hard-boiled egg, pancakes with honey, coffee and juice.  He said it was hard to travel with people who snore; as I snore, I took a bit of offense to that. I said there were a lot of reasons that made it difficult to travel with people. He thought it was likely that my traveling partner slept easily, and I said not really; she had left the tent and slept in the lobby and couldn’t seem to sleep when it was cold. She also admitted she was a light sleeper.  He went on to say that she seemed so accommodating and I agreed, she was, but almost too much so, as if she were trying too hard to please. I said I admired people with a strong sense of themselves, and it was true she had that in some ways, as she seemed determined not to lighten up and have a drink, not to ride the ATVs because it ruined the dunes, and not to stop complaining about the trash everywhere we went. I also spoke my mind, but I had my unique issues. I admitted that the thing that annoyed me most was an utter lack of a sense of humor. I do best around people who make me laugh and who laugh with me. 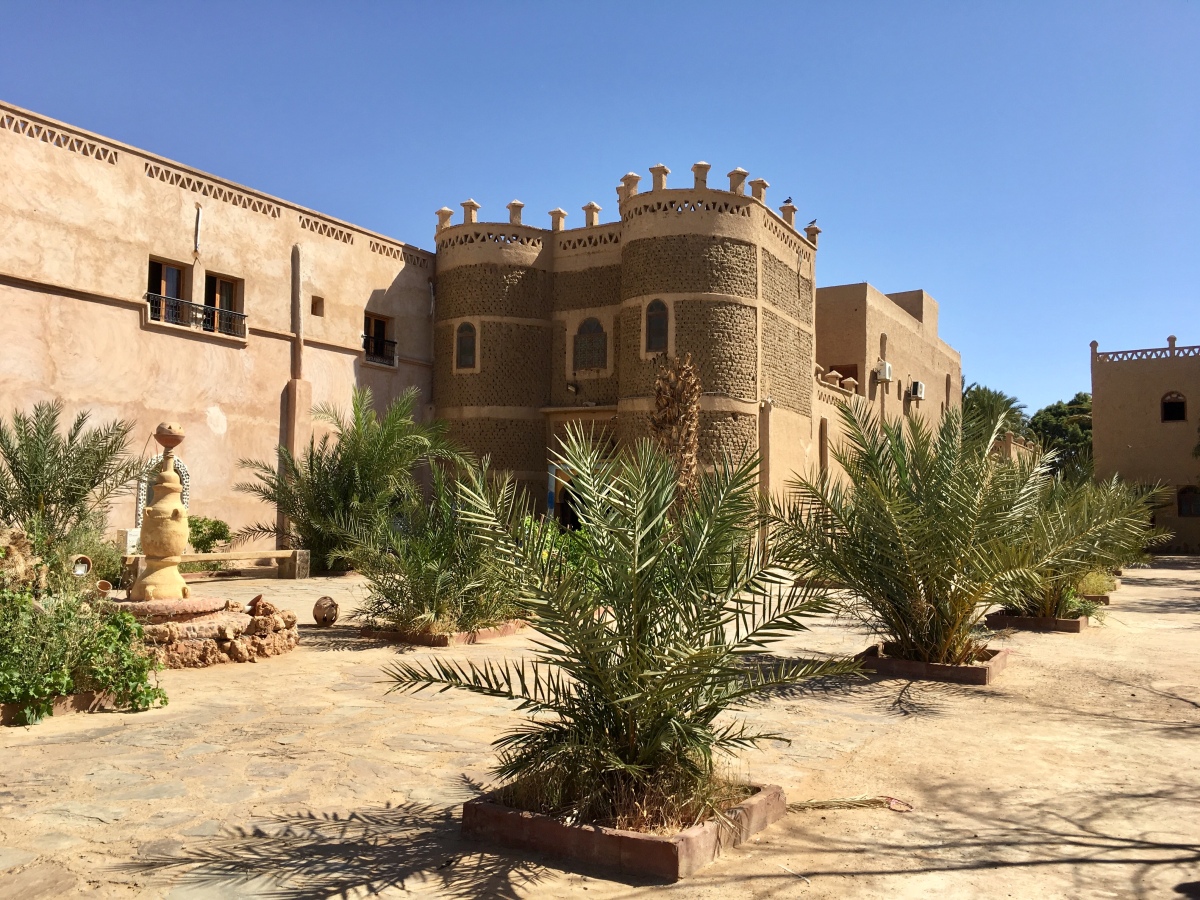 After breakfast, I sat on a lounge chair under the shade of a small palm tree and read The Forgiven for a couple of hours.  It was nice to sit by the pool, such a pretty royal blue against the mud-colored stone of the hotel. Water ran along the edges of the pool like a fountain, and the sound was soothing. It was a shame I hadn’t brought my bathing suit. 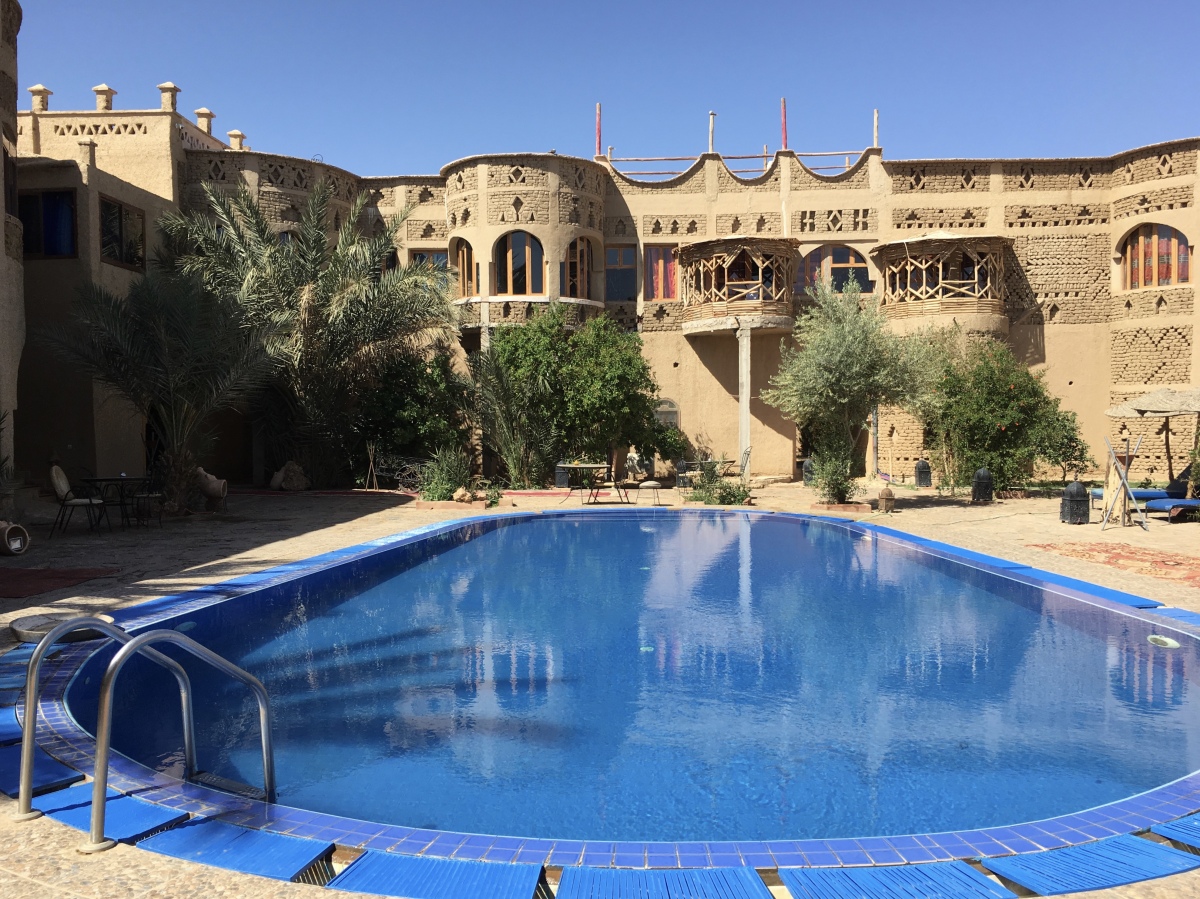 We waited until about 1:20 for the young foursome to return from their 4×4 excursion before we could go to lunch for a Berber pizza. Once we were all settled into the van, Aziz informed us we’d go listen to music after lunch.  I was a bit annoyed because I hadn’t signed up for that and felt we should have been told ahead of time. My traveling partner said, “Whatever the group wants.”  I felt the opposite, I preferred to be told things ahead of time; I never liked things sprung on me. I’d have decided to stay behind had I known. The lunch took forever and I grew impatient but at least I had wi-fi and was able to chat briefly with my husband.

We had rice with cold veggies and then the Berber pizza stuffed with veggies and beef, finished off with apple and orange slices sprinkled with cinnamon.  A Berber guy in a blue robe and a turban served us under a thatch-roofed balcony with views of the desert.  The dunes were hazy in the distance.

Gabe told us that the night before, they had started dancing in the common room and some Arab girls (16- to 24-year-olds), not covered, were dancing in their own group nearby. The father became passive aggressive and turned off the music on the boom box and put a damper on the whole thing.  He remembered it was the culture for a father to be protective of his daughters.

In the afternoon, I lay on cushions in the common room and read The Forgiven and fell asleep.  It was a nice relaxing day but also quite boring. I had a warm orange Fanta.  Meanwhile, my half bottle of red wine and my bottled water were cooking in the tent.  I had nowhere to keep them cool.

I was hoping to pay extra and get my own room today, but the hotel was fully booked.  I would gladly have paid to get out of that tent for the night.

I was hoping things would get better with the tour.  I was so ready to be done with it.  I really hate group dynamics although individually each person was nice enough. 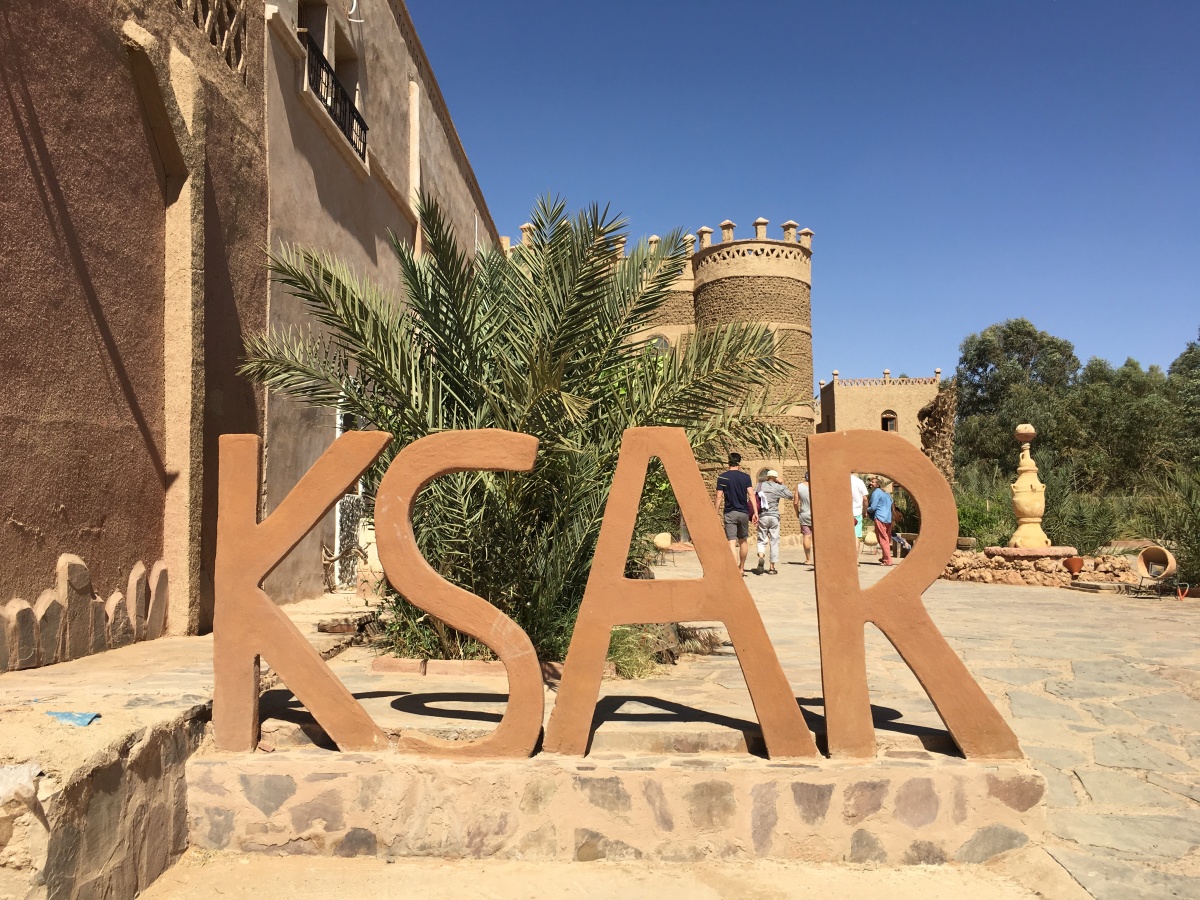 I sat in the lobby and tried to get wi-fi, but had no luck. 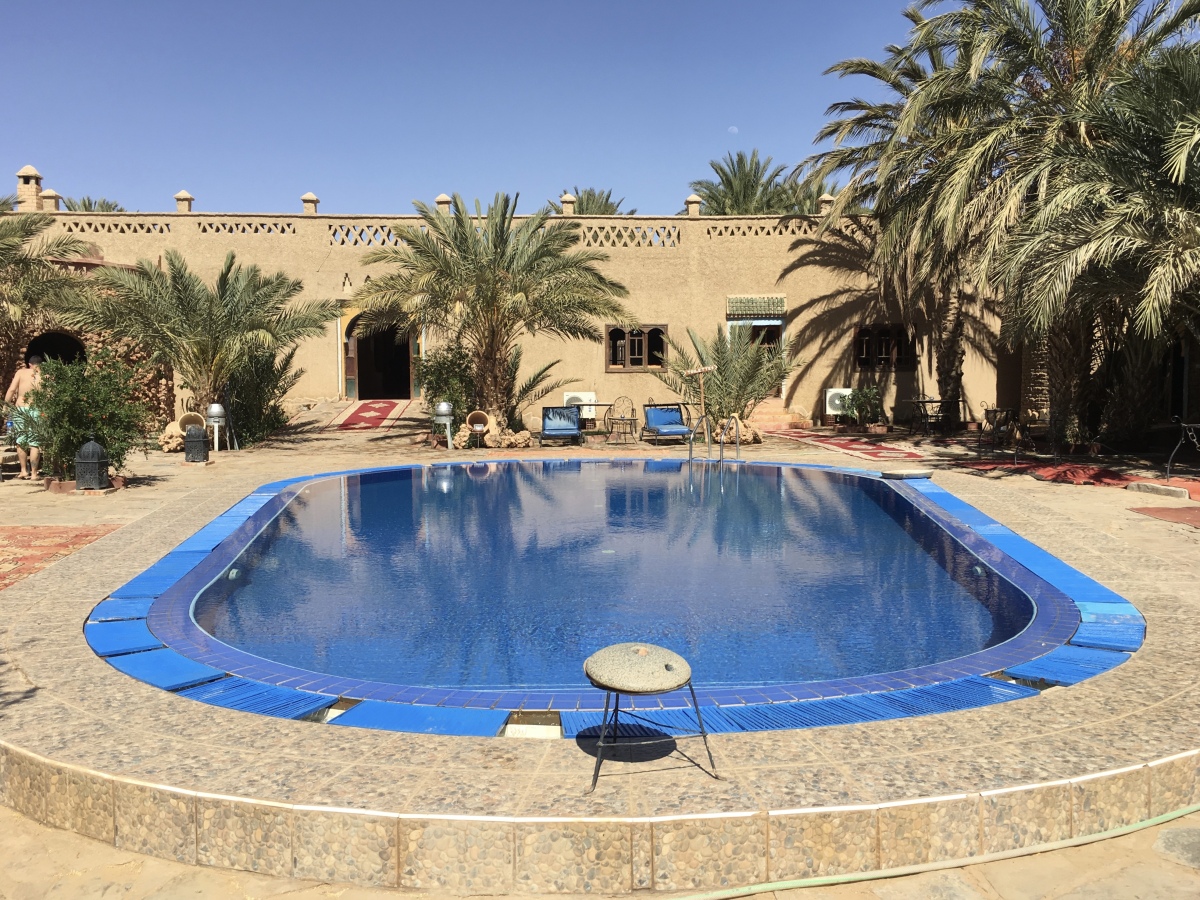 Finally at 6 p.m., we went out on our camel ride, which I wrote about here: morocco: of the desert, dromedaries & berbers.  That was the saving grace of the day.

I had dinner with Susan, Anthony and René.  I shared the rest of my red wine with René and Gabe. Anthony complained that my voice woke him up last night and asked me to please keep the volume down.  I didn’t much care for being reprimanded; besides, if my voice had woken him up, he must have gone to bed very early indeed as I went to bed early myself.

There were times when I liked Father Anthony, and other times when he rubbed me the wrong way.  All of the young foursome despised him and complained about him whenever he wasn’t within earshot. I found him a mixed bag, delightful and off-putting.

I was a real grump on this day, I knew.  Sometimes it just couldn’t be helped.

In this case, I focused on our desert accommodation and our lazy (& boring) day in the desert.

I challenge you to post no more than 20-25 photos and to write less than 1,500 words about any travel-related photography intention you set for yourself. Include the link in the comments below by Wednesday, March 4 at 1:00 p.m. EST.  When I write my post in response to this challenge on Thursday, March 5, I’ll include your links in that post.

This will be an ongoing invitation, every first, second, and third (& 5th, if there is one) Thursday of each month. Feel free to jump in at any time. 🙂