After enjoying my gelato in the air-conditioned cafe for a good long while, I walked around a corner to get my first glimpse of the Baroque Fontana di Trevi, or Trevi Fountain.  It was built to celebrate the abundant water brought into the city by aqueducts.  Oceanus rides across waves in a chariot, pulled by horses and horn-blowing tritons, commanding the flow of water. A triumphal arch bursts with seashells, roaring sea beasts, and mermaids. Legend has it that if you throw a coin in, you’ll be sure to return to the Eternal City.  It must be thrown with the right hand over the left shoulder.

I was surprised by how the huge basin is squeezed into the tight tre vie, a meeting of three small streets.

I didn’t bother throwing a coin in as I already felt it was unlikely I’d return to Rome. 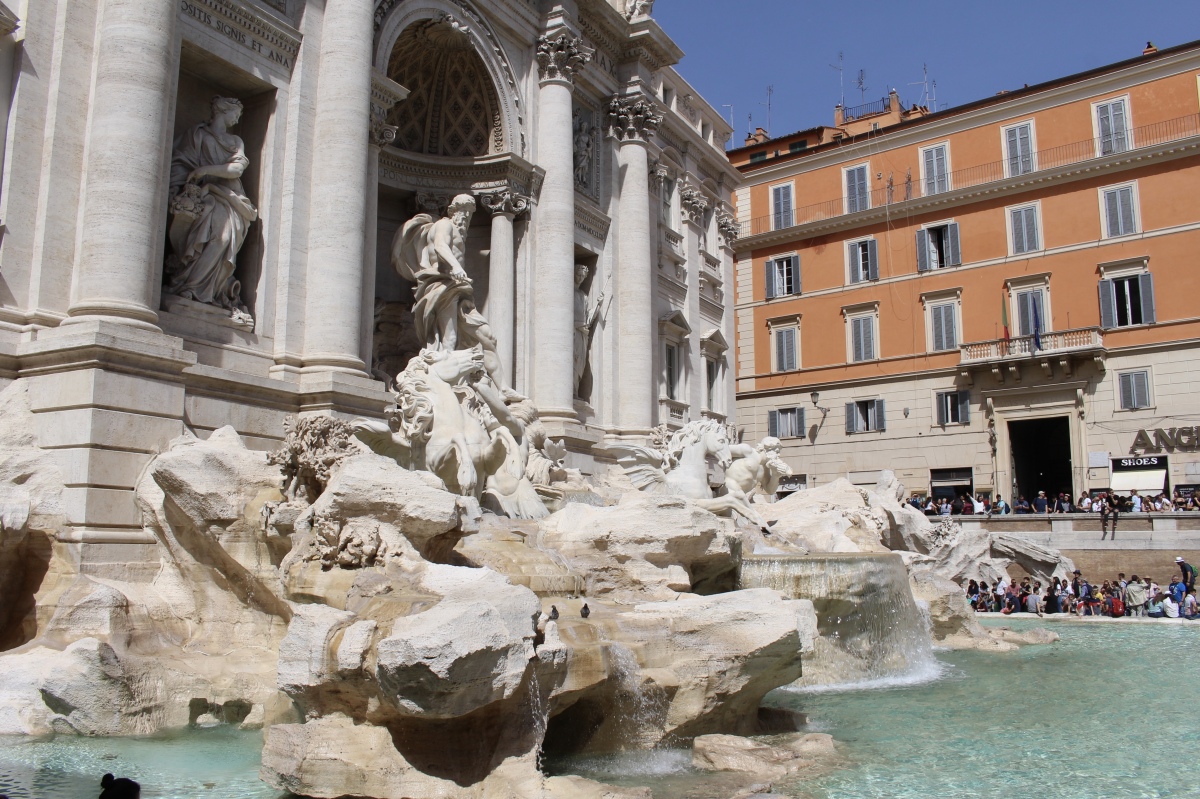 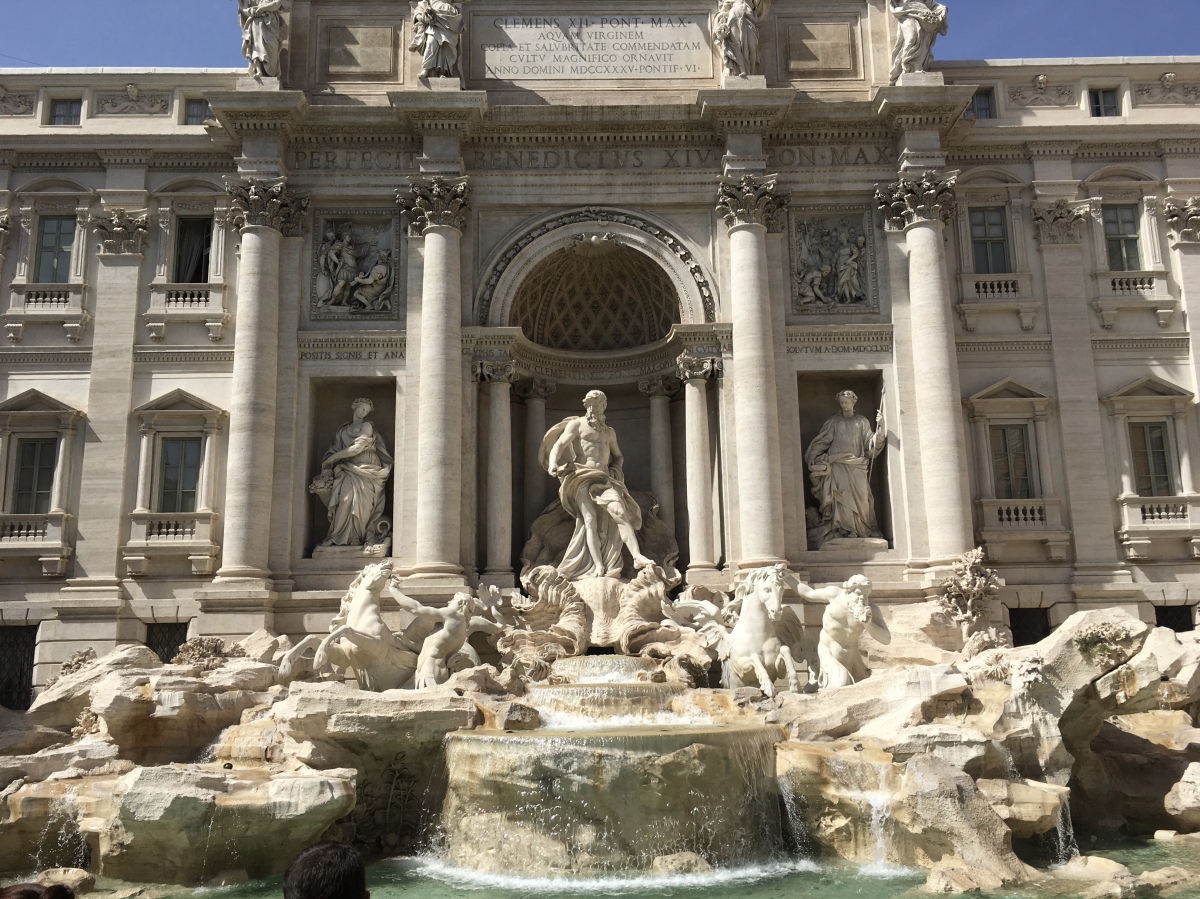 building near the Trevi Fountain

It was quite a walk after that to the Spanish Steps, past Sant Andrea Delle Fratte and another obelisk and past the Keats-Shelley Memorial House to the famous steps.

fruit stand on the way through the Heart of Rome

In the square at the bottom of the steps was the “Sinking Boat” Barcaccia Fountain (1627-29).  The half submerged boat brims with water, depicting the urban legend of a fishing boat supposedly lost during a 1598 flood of the Tiber.  It supposedly ended up beached at this spot. 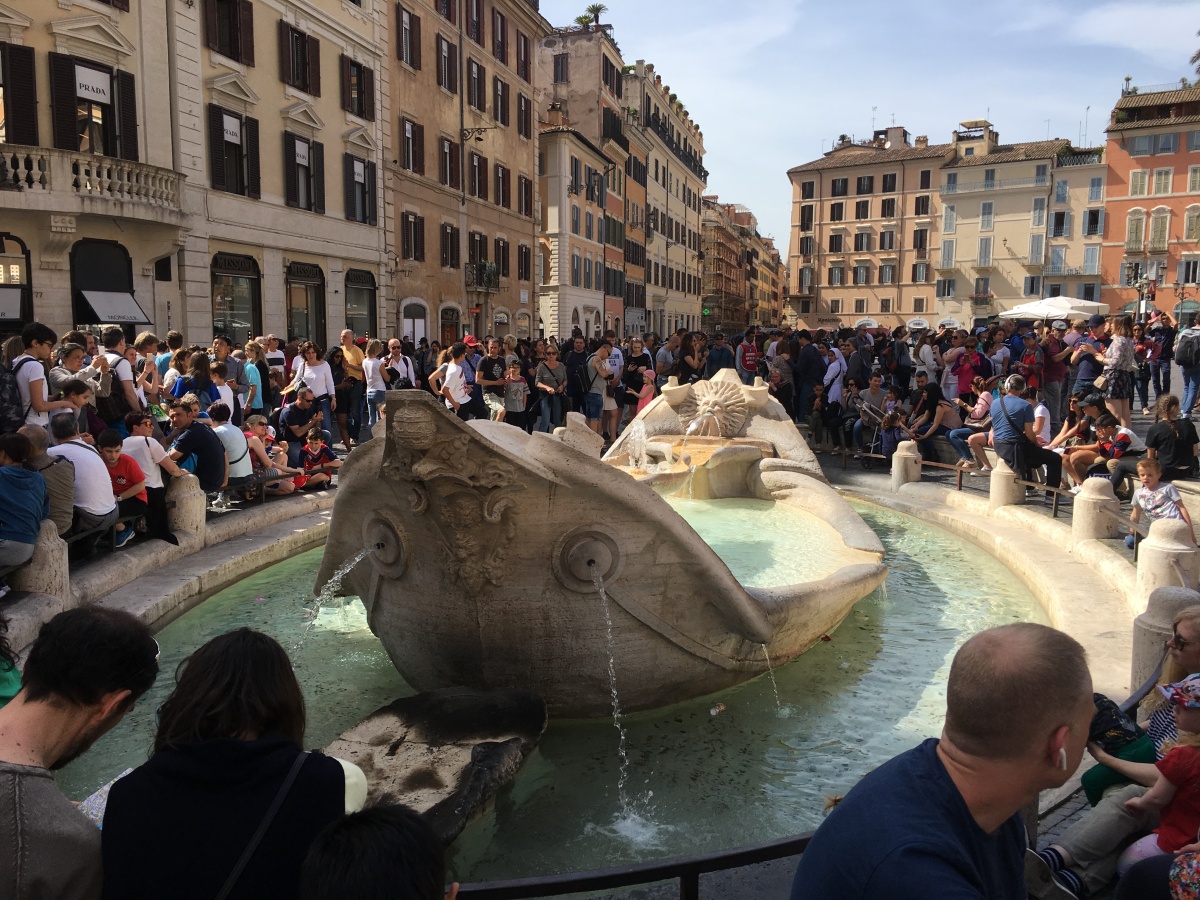 The 138 curving Spanish Steps, one of Rome’s iconic sights, lead up from Piazza di Spagna, forming a butterfly shape as they fan out around three terraces.  They climb up a steep hill to the top, where another obelisk is framed between the two Baroque church towers of Trinità Dei Monti.  Azaleas were in bloom between the steps making it quite pretty.  The hordes of people made getting decent photos challenging.

Built in 1723 with French money, the steps are called Spanish because of the Spanish Embassy to the Vatican located here. 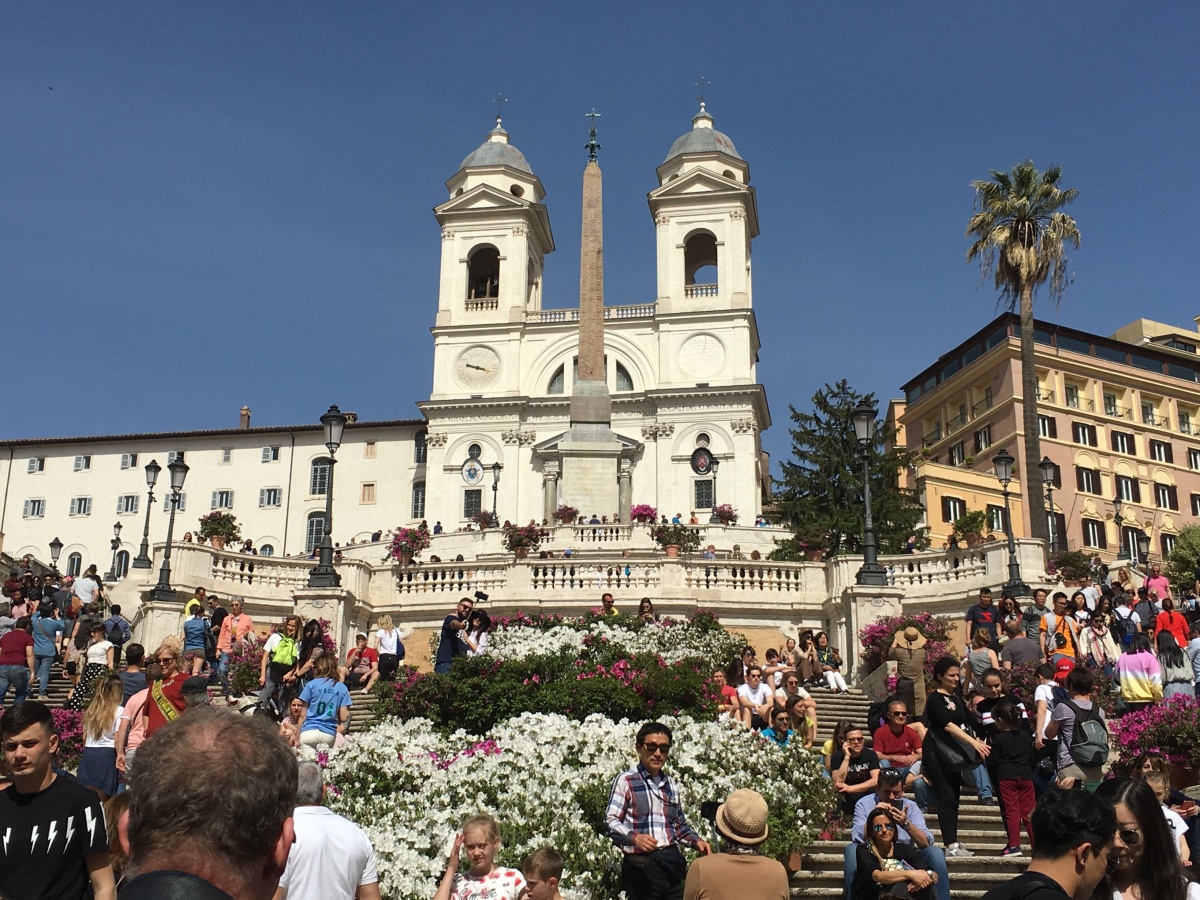 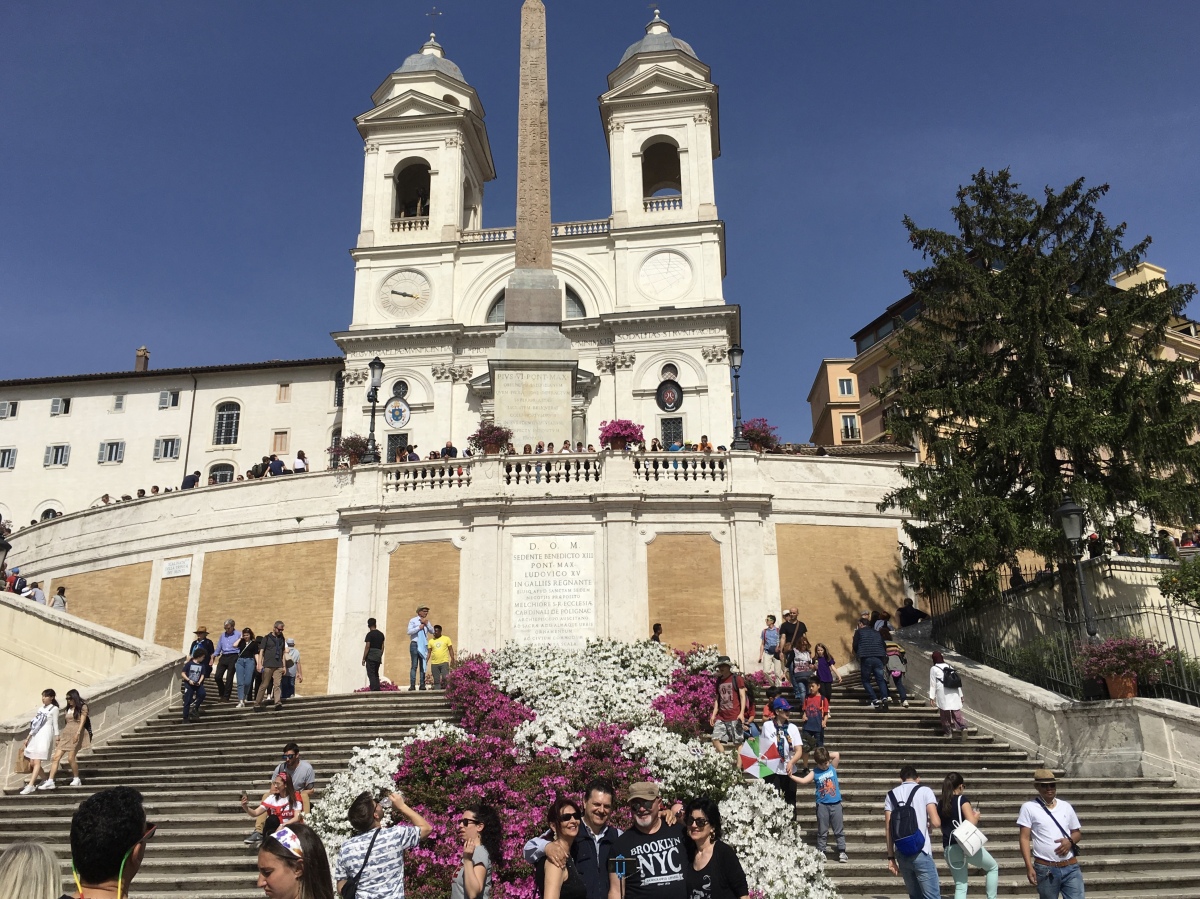 looking down from the Spanish Steps to Piazza di Spayna

It was hot, so the climb up left me in a sweat.  I walked all over trying to find the hop-on hop-off bus.

I walked past the Convento dei Cappuccini, which houses six crypt chapels where everything is made of human bones.  Between 1732 and 1775, resident Capuchin monks used the bones of nearly 4,000 of their departed brothers to create this macabre memento mori.  Each crypt is named after the type of bone used to decorate (skulls, shin bones, pelvises etc). 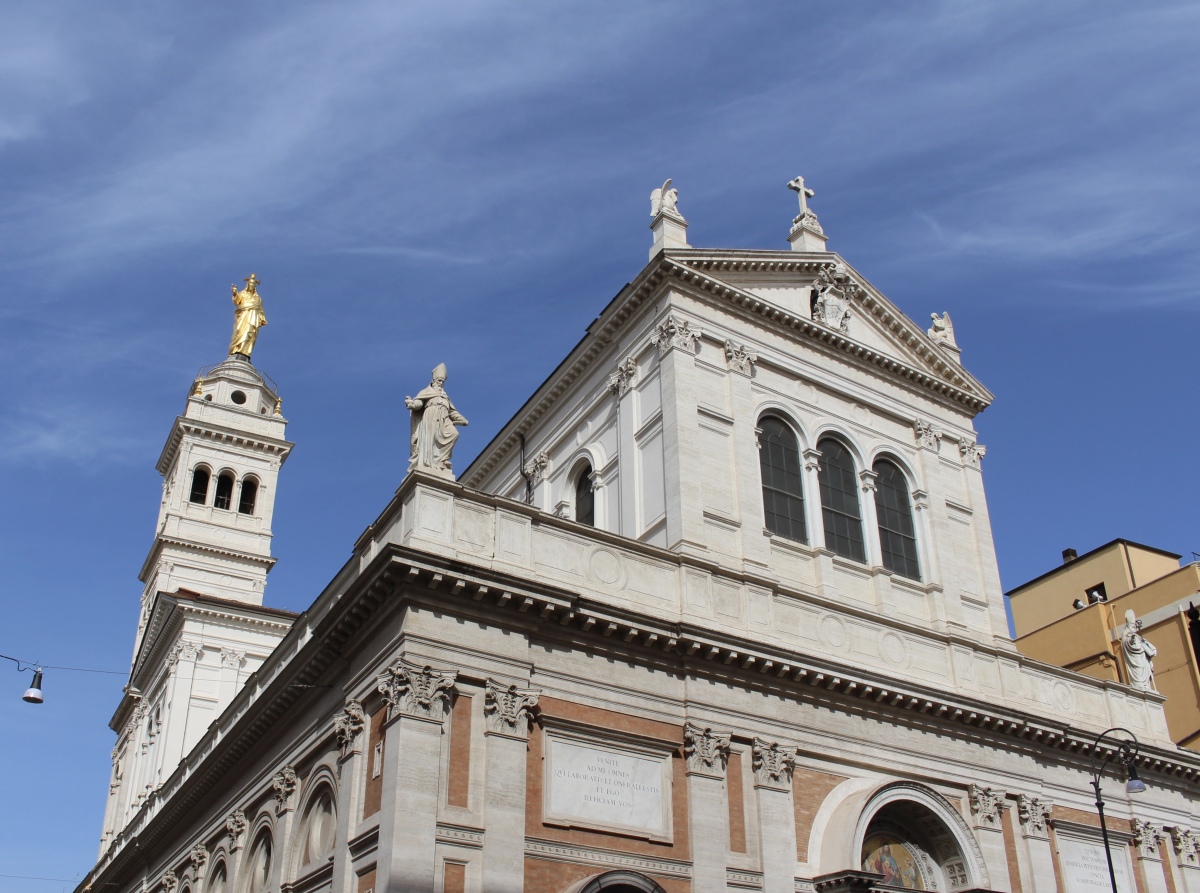 Finally finding the hop-on bus, I took it back to the train station and meandered back to the Beehive Hostel.  I laid down in my comfortable room at the Beehive with the windows open.  Within minutes, I was asleep. An hour later, I woke up chilly, so I got under the covers and slept another hour.

At 7:30, I went downstairs to the cafe as Steve, the owner, originally from Denver, Colorado, made a delicious dinner: Beet, carrot and blood orange salad (also with onions and walnuts); Crostino with melted Pecorino cheese and sauteed mushrooms, Penna all’arrabbiata (slightly spicy pasta dish with tomato, garlic, red pepper flakes, and parsley), and biscotti for dessert. A 10€ donation plus a tip was suggested, plus 2€ per glass of wine (I had 2), so I left a 20€ total donation.

The people at our communal dinner were friendly and talkative: a German mother and her 17-year-old daughter, a young environmental scientist from California, a young lady from London, another from Germany who worked to empower women and who had lived in Ecuador for a year.  She lived in Sangolqui south of Quito, on the outskirts of the city, smaller and safer, and she recommended I consider it as a base when I go to Ecuador.  Finally, there was a pretty young woman from India who worked in film production. When I mentioned my son was a butcher apprentice in Denver, she said lately she’d been finding butchery quite fascinating as an artistic skill; she liked the way they prepared and cut the meat.

our dinner group at the Beehive Hostel

It was fun way to end my first day in Rome.  When I shared about my 7-year-separation and teaching abroad, people talked about how different marriages work.  I used my hands to show that before we separated, my husband and I were all jumbled up and intermingled, like a giant tangle with no boundaries, but after, we were like the picture below, coming together and going apart, sharing our lives but not all entangled:

I went to bed close to 11:00 p.m.; I was fairly overwhelmed by my plan to visit the Vatican Museums the next day.  I wished I hadn’t committed and debated whether I should just forfeit the 34€ I’d already paid and call it a sunk cost.

This post is in response to Jo’s Monday Walk: Corte Pequena.

River Culture and Rural Communities : ँ : at the Heart of Travel