As I started my “Road Trip to Nowhere” on a Sunday morning in September, the sun peeked out from a wispy sky and “Time After Time” played from my Spotify playlist. I had 540 miles ahead of me.

Passing Butler’s Orchard in Maryland, I remembered outings to pick pumpkins and ride a hay wagon with our neighbors Ed and Julie, back in the day when the kids were toddlers. They had two little girls, close in age to our two boys; all were best of friends.

The road always brings strange visions, odd bits of songs, and long-buried memories. Bruce Springsteen sang about a freight train running through the middle of his head, and a sign said “Dump Truck Drivers Needed.” The Toyota RAV took me under a gray flannel sky, between rolling hills and green pastures bordered by forests.  At South Mountain, raindrops gently dotted the windshield, kudzu ran rampant along the roads, and web worms had woven white nets into the trees. Red barns nestled in farmland and Beaver Creek Antiques preceded Sharpsburg and Antietam Battlefield.

Soon, I was rushing headlong down a hill with runaway truck ramps offering escape from malfunctioning brakes. I listened to Gordon Hempton, an acoustic ecologist, on the On Being podcast. “Silence is an endangered species,”  he noted, and added that eyelids evolved on humans but not ear lids; it is too dangerous for sound to be muted.  He said the sound from grasses varies depending on the size of blades and that “earth is a solar powered jukebox.”  He threw out other nuggets of wisdom about silence:

The sound of the wheels on pavement and the music on my playlist made silence elusive. Instead a “Ministry of Encouragement” was on offer at a church in western Maryland; another place of worship was called God’s Ark of Safety Church. Just past Cumberland a sign warned: “Maryland Wildlife: Watch for it!  Stay Alert.”

Then I was barreling through a full-on downpour as I passed a white barn with a pine-tree quilt pattern on the end, and soon, I hit the Eastern Continental Divide at 2,610 feet.  I climbed higher, topping off at Meadow Mountain (2,780 feet). As I descended into a valley, mist swirled through trees and goldenrod glowed through dense fog. After passing Deep Creek Lake, a place we’d visited as a family, I finally glimpsed blue skies as I drove into West Virginia: Wild & Wonderful.

West Virginia is nothing if not mountainous, so more runaway truck ramps branched off the highway.  The state has places such as Cheat Lake, and eateries with names like Apple Annie’s Bakery, Brake 4 Chikin, and Smokin’ Jacks. I considered stopping for some liposuction at Tuscan Sun Spa, but I wouldn’t give West Virginia any business unless my life depended on it. After all, state residents continue to be big Trump supporters.  On a concrete wall was a painted U.S flag: “God Bless America – United We Stand,” sounding a bit too much like a MAGA slogan. I soon crossed into Ohio, which wasn’t much better, with a huge industrial plant belching smoke near the border. A sign warned of “Drug Activity: Impaired Drivers,” alerting me to watch my back.

A big billboard put out recruiting tentacles for the armed forces.  Many of the places I would visit on this trip recruited heavily for military service; it offered a way out of dead-end lives and poverty. The billboard said: “For Marines There Are Only Battles Won.”  Hmm.  That wasn’t really the truth, was it, as our armed forces likely lost as many battles as they won.

At the Diamond Stone Company, a man with no shirt loitered, smoking a cigarette over his huge sagging pot belly.  I drove past Raccoon Creek Outfitters and the Cavalry Assembly of God.

Before I knew it, I was in Chillicothe, at the Hopewell Culture National Historical Park.  There were several sites to the park along the Scioto River, so I started at the Mound City Group. This prehistoric ceremonial and burial ground is the only fully restored Hopewell site. Its walls enclose at least two dozen mounds in an area larger than ten football fields.

The monumental structures found here were built by Native Americans nearly 2,000 years ago. Hopewellian people gathered at these earthworks for feasts, funerals and rites of passage such as marriages, competitions, and mound construction. As many as one hundred cremated remains were found at Mound City.

There’s no evidence that people lived within the enclosure full time.  No more than three Hopewell homes have ever been discovered in one place, so they may have lived in extended family units scattered along the waterways.  Even with this simple social organization, the Hopewell people created immense public works requiring complicated engineering.

This culture seemed to unify around 1) building earthworks in geometric patterns and 2) manufacturing finely crafted objects made from exotic materials such as copper, mica, and marine shell gathered from distant lands. “Hopewell culture” describes the range of shared beliefs, practices and symbolism that flourished from about 100 B.C. to 400 A.D. 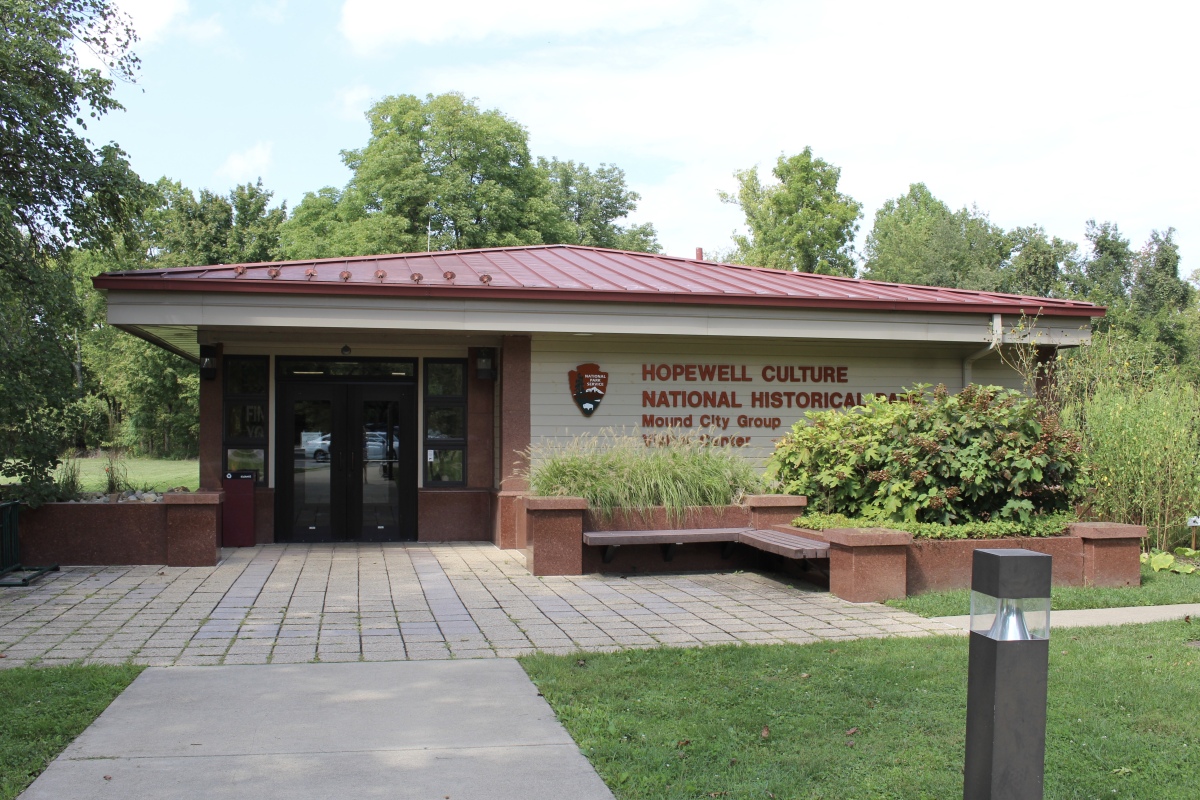 Watching a twenty-minute film at the park, I learned that the Hopewell people built geometrical ceremonial or burial mounds in the valley around Chillicothe, Ohio from about 200 B.C. to 400 A.D.  These mounds are spread over several sites but have similar shapes at each site: a large circle, a square, and a smaller circle.  All small circles at all sites have the same diameter.  The squares in all sites have the same length sides and contain 27 acres. The squares fit perfectly within the larger circles.  No one knows the reasons for these dimensions. This kind of mathematical exactitude reminds me of places I visited last May in the Four Corners area, such as Chaco Canyon.

In 1920, archeologists uncovered cremated remains of 20 burials, some on raised platforms with an array of unusual objects. One rectangular grave was covered with sheets of mica, an exotic mineral not found in Ohio.  The mica was mined in North Carolina and brought here perhaps as gifts or offerings, indicating an extensive trade network.  The Hopewell prized mica, and often made mirrors or decorative cutouts from this transparent-to-opaque material.  It seems likely the people buried here were important people possibly brought from far away to be ceremonially cremated and laid to rest.

Tools and ornaments used for these occasions were made from materials obtained in trade: copper and silver from near the Great Lakes, obsidian from present-day Yellowstone National Park, sharks’ teeth and seashells from the Atlantic Ocean and Gulf of Mexico, and mica from the southern Appalachian mountains. These raw materials were fashioned by artisans into fine objects, which surfaced from under the mounds.

Like all other Hopewell sites, the burial mounds had been covered in forest, and then had been plowed under for agriculture. When Camp Sherman, a huge World War I infantry training facility, was built here, the land was further leveled. Luckily the burial complexes extended underground so archeologists were still able to excavate them. 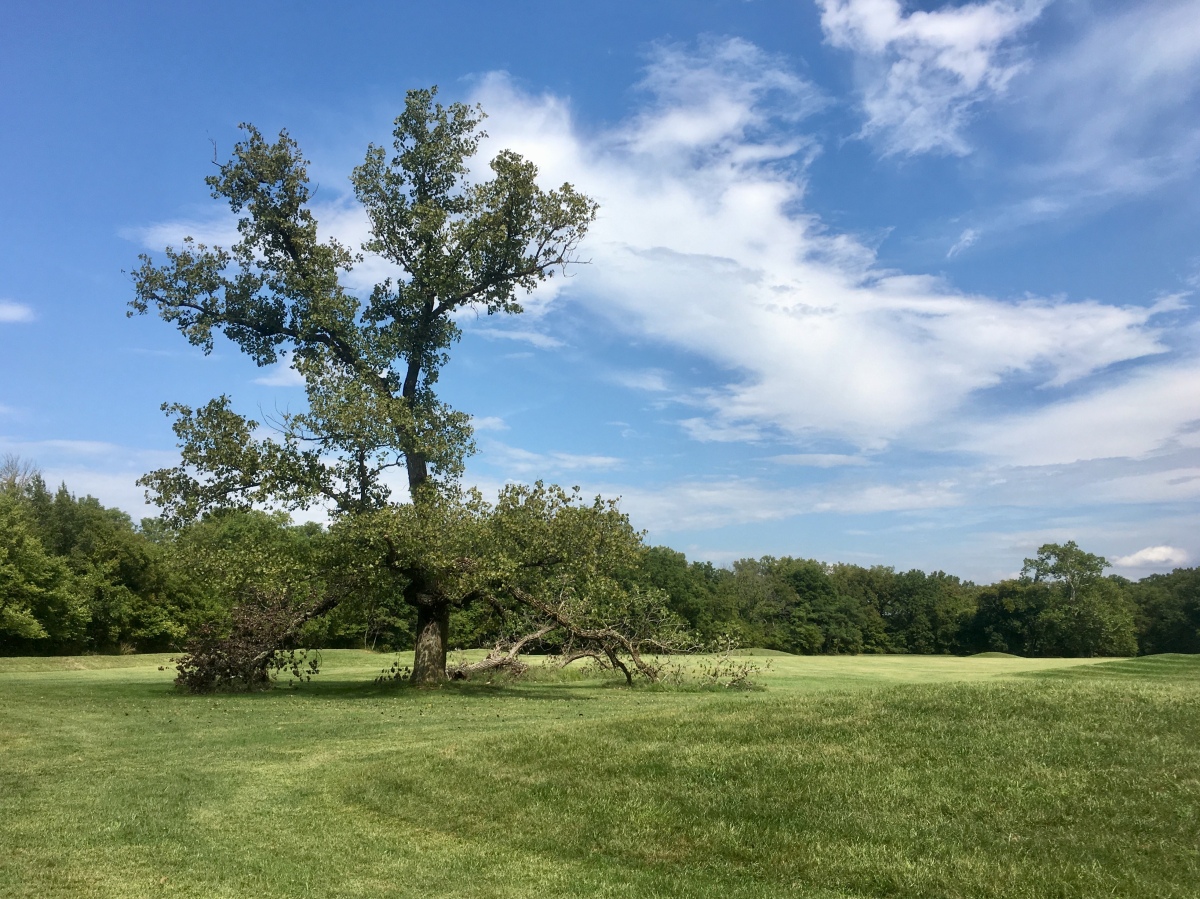 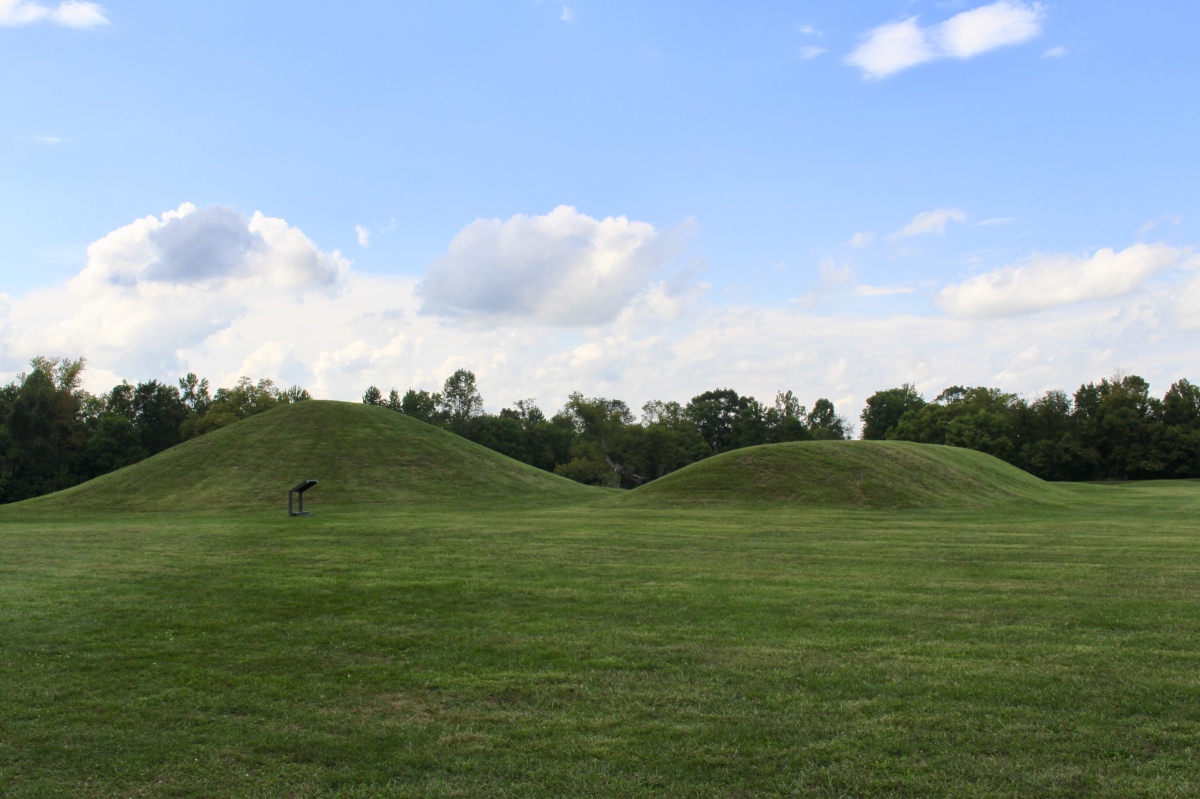 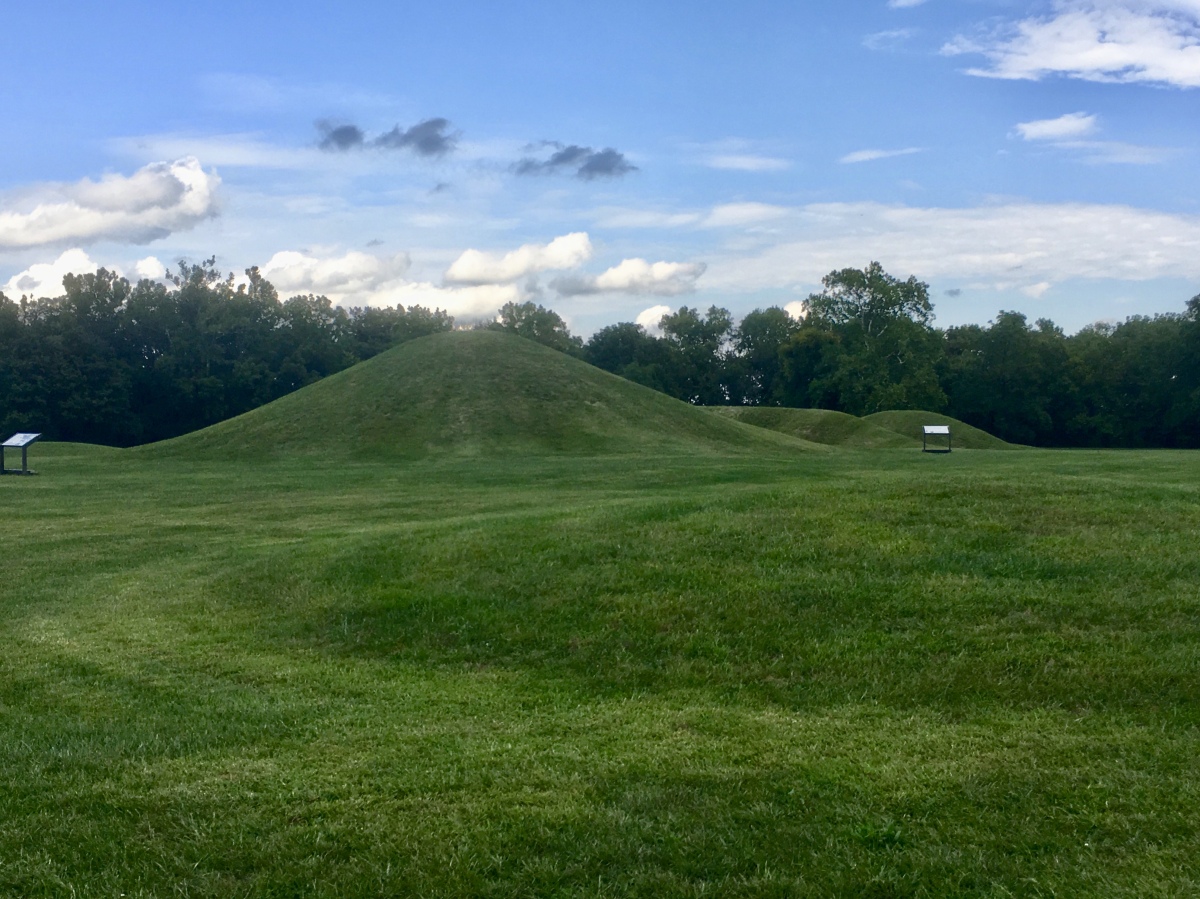 About 1,500 years ago, the Hopewell way of life had come to an end for unknown reasons.

President Warren G. Harding declared the site “Mound City Group National Monument” in 1923.  In 1992, four more of Chillicothe’s earthwork sites were added and the name of the park was changed to Hopewell Culture National Historical Park.

A thunderstorm gathered as I wandered around the grounds, and I just made it for cover.  After exploring the museum, I drove to the Hopewell Mound Group. This site includes about three miles of earthen embankments, at least 40 mounds, including the largest known Hopewell mound, and two smaller interior earthworks. Archeologists named the entire culture after this site, the largest Hopewell earthwork ever constructed. The site’s and the culture’s name was taken from property’s owner in the 1890s, Mordecai Cloud Hopewell.

By the time I arrived, the storm was in full force, so I sat in the car waiting for the deluge to pass.  Finally, I walked out to an overlook but only found hay bales and farmland, but no mounds.  The grass was soaked, so I didn’t venture into the field. Lightning was striking in the surrounding fields, so I left the area to continue my drive to Cincinnati.

Back on the road, I followed 35W through cornfields under gray low-ceiling clouds.  From the soaked woolen skies came jagged lightning strikes, sometimes double or triple simultaneous strikes.  I finally made it to I-71 S, past congregations of silos huddling together, held close by steel arms.

It was strange that on the right side of the highway, what my sister calls “God light” beamed from behind clouds, while on the left, the clouds drenched the land with heavy rain.

strange skies on the road

I was soon driving past the Fort Ancient American Indian Museum 30 miles north of Cincinnati, while Weezer sang “Island in the Sun.”  I whizzed past Little Miami State and the National Scenic River, and before long I was at the Kingsgate Hotel and Conference Center at the University of Cincinnati.

I checked in and went straight out for dinner to Cactus Pear, where I had three shrimp tacos, terrible rice, and a delicious cucumber margarita in a very weird atmosphere.

The following day would entail a shorter driving day, only 335.8 miles, as I planned to visit two sites.

(Information about Hopewell Culture is from National Park brochures, the museum and film, and the various signs placed around the park.)

Include the link in the comments below by Tuesday, February 18 at 1:00 p.m. EST.  When I write my post in response to this challenge on Wednesday, February 19, I’ll include your links in that post.

I invite you all to settle in and read a few posts from our wandering community.  I hope you’ll be inspired. 🙂

Many thanks to all of you who wrote posts about the journey. I’m inspired by all of you!