After visiting Hassan II Mosque, we took a petit taxi to Rick’s Cafe, where we sat at a table on the second floor overlooking an enclosed courtyard. I ordered vegetable pokhara, saffron rice, raita, and eggplant compote.  The meal consisted of piles of deep fried vegetables that I didn’t want to eat because they were too filling and fattening. I also had a glass of chilled white Moroccan wine that made me feel a bit loopy.

Ambiance oozed from every corner.  The bar, lounge and restaurant, run by a former American diplomat, opened in 2004; it was designed to recreate the bar made famous in the classic 1942 movie Casablanca. Set in an old courtyard-style mansion built against the walls of the Old Medina of Casablanca, the restaurant/piano bar is filled with decorative details reminiscent of the film: curved arches, a sculpted bar, balconies, balustrades as well as beaded and stenciled brass lighting and plants that cast shadows on white walls. The famous song from the movie, “As Time Goes By,” is requested often of the in-house pianist on the 1930s Pleyel piano. Other songs on the repertoire include classic French, Spanish and Brazilian songs from the 1940s and 1950s, along with American favorites such as Summertime, The Lady is a Tramp, and Blue Moon. 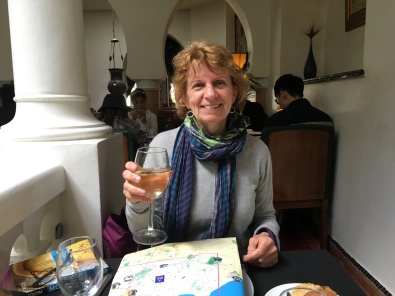 After lunch we walked through the Ancienne Médina looking at the merchandise, while stray cats sulked about everywhere.  It lacks the medieval character of other medinas, selling mostly plastic dry goods and tacky clothes.  We stopped into La Sqala, the restaurant where we ate the night before, for a few daylight pictures.  Then we made our way through the labyrinthine streets to the shops lining the outer wall, and then to the Café de France where we enjoyed more cappuccinos and people watching. 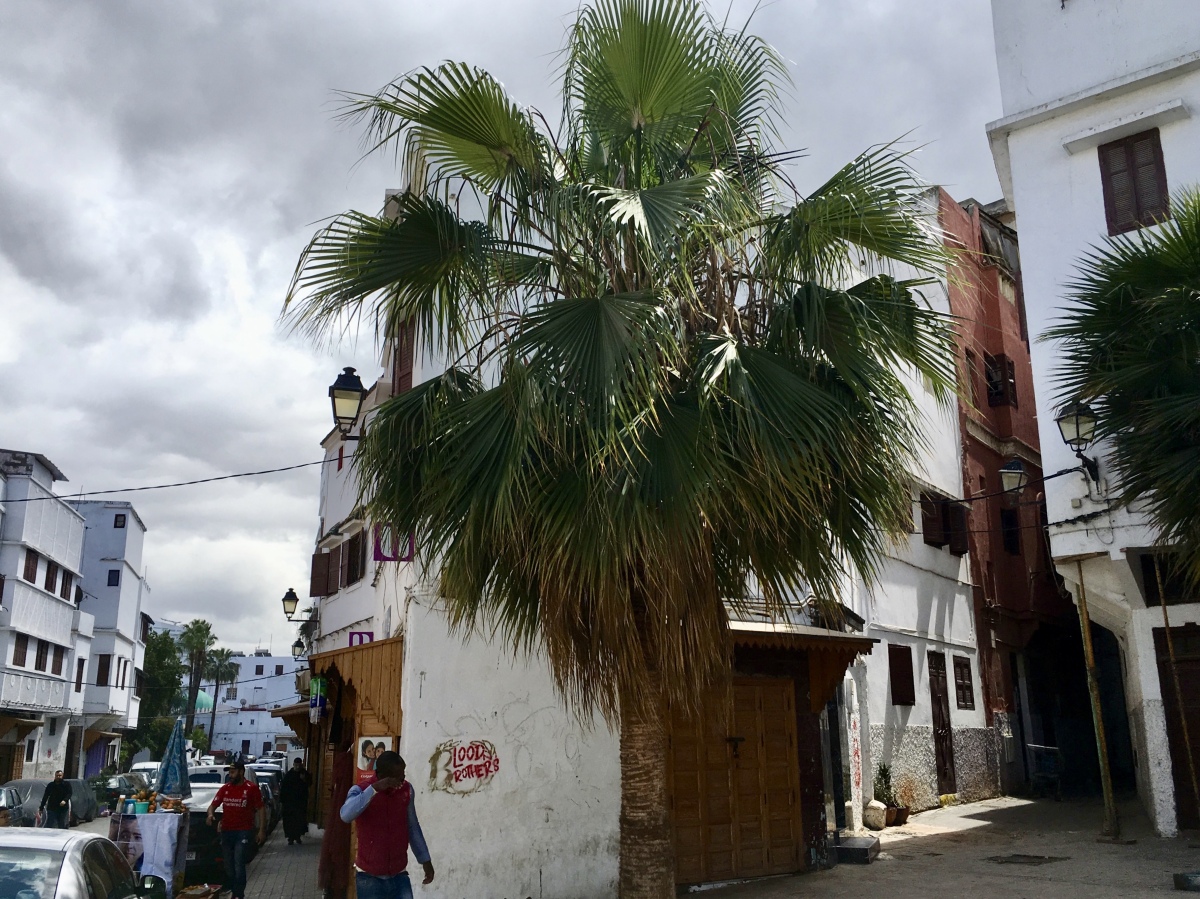 walking from Rick’s Cafe to the Ancienne Médina

Casablanca is definitely not a tourist town, so after Hassan II Mosque and Rick’s Cafe, we wondered how we’d fill the rest of the day.  We decided to try a walking tour outlined in my old Lonely Planet Morocco book: “Central Casablanca,” which led us through neighborhoods built in the Mauresque style of 1912-1924.  The style blended aspects of traditional Moroccan design such as Islamic arches, columns, scrollwork, and tilework with more liberal influences of early 20th-century Europe.  By the 1930s, Mauresque architecture began to reflect the Parisian art-deco style, characterized by ornate wrought iron balconies, staircases, windows, carved façades and friezes, and rounded exterior corners.  Some were restored and in good condition, but many were dilapidated.

The architect Henri Prost ((1874-1959) designed Casablanca from the air.  The city is considered the pinnacle of French colonial achievement.

Following the tour, we walked up a majestic tree-lined promenade, dropping into the Parc de la Ligue Arabe, or Park of the Arab League, designed in 1918. Here, we found a modern day skate park with young men on skateboards surfing into giant concrete holes and sailing into the air.  Everywhere was the sound of metal rolling on wood and concrete.

The streets around this expansive park were dotted with art deco designs from the French protectorate era, as well as some modern buildings. 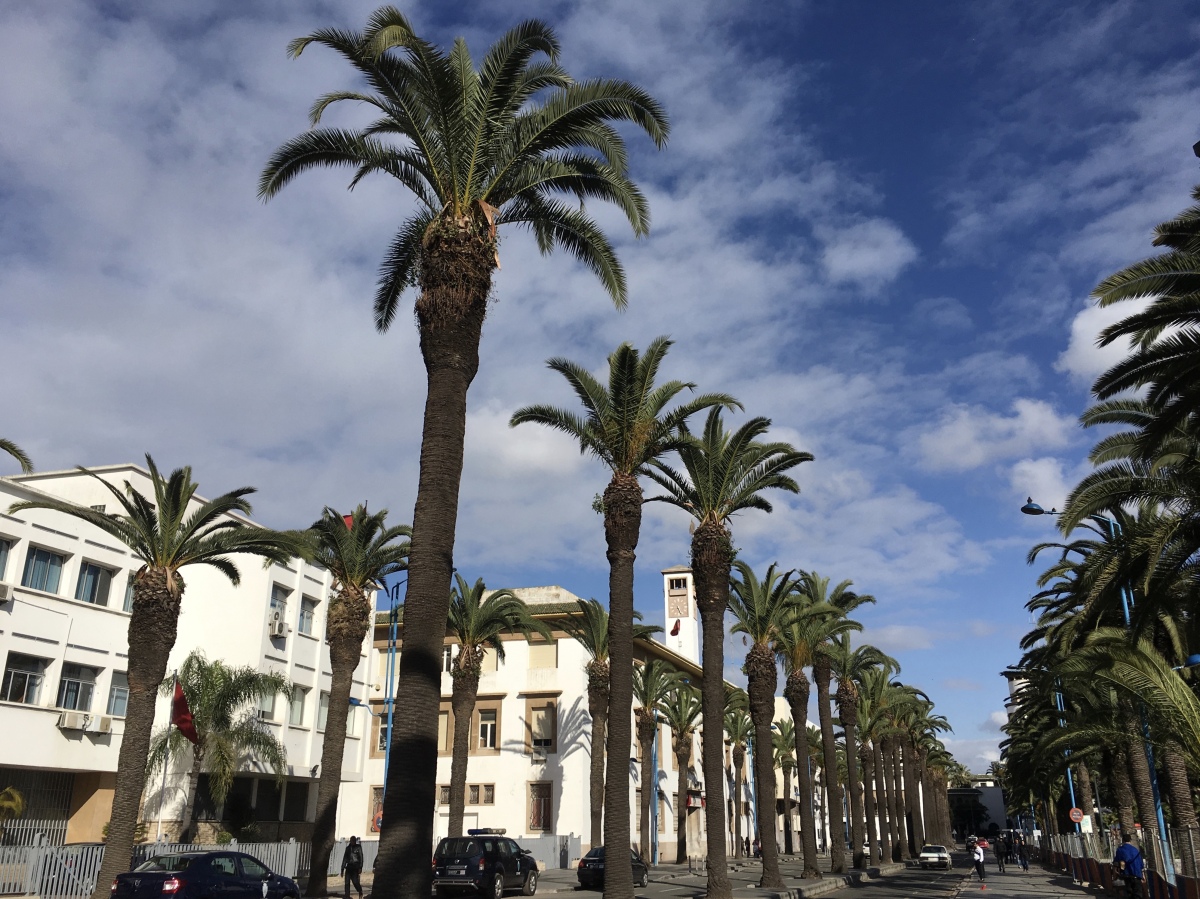 We spotted the Maruesque Cathédrale du Sacré Coeur, with elements of neo-Gothic, from 1930.  The Roman Catholic church was deconsecrated in 1956; inside it is now a cultural center and apparently quite dilapidated, with pigeons living in the towering art deco columns. 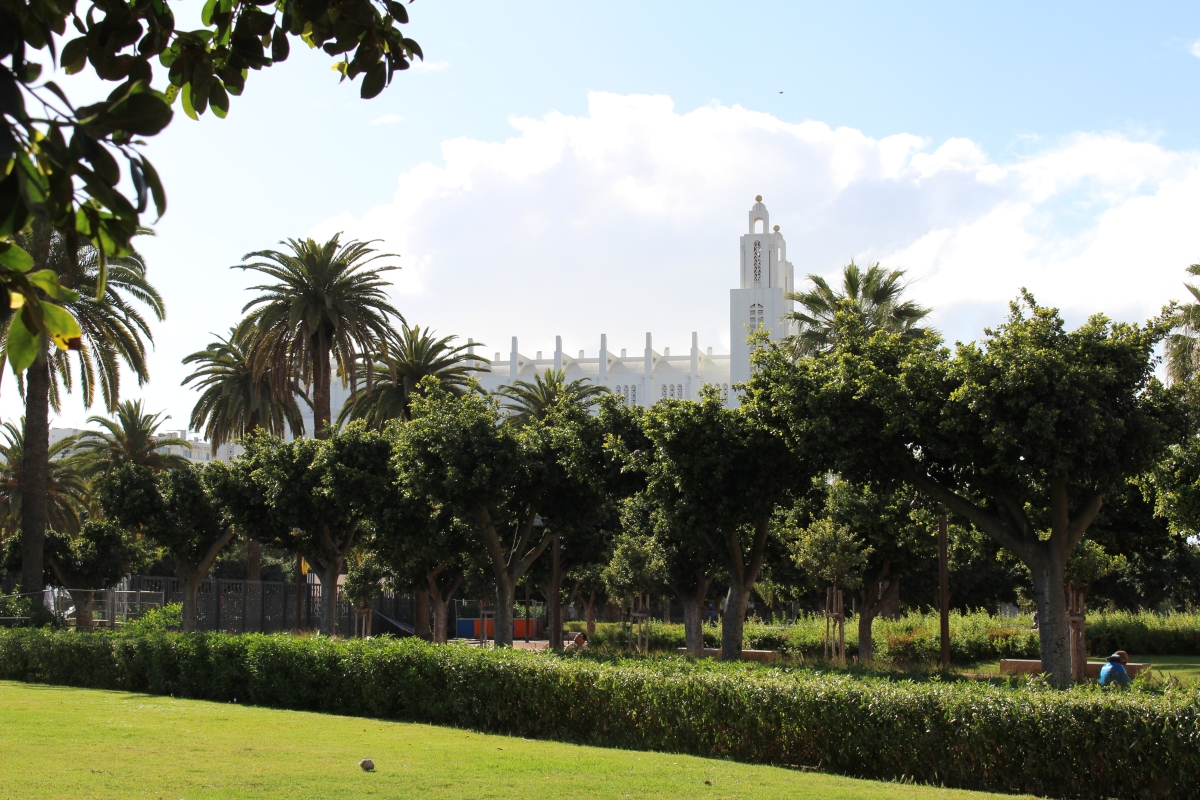 We followed the palm trees toward the wilaya, or old police headquarters, now the governor’s office, dating from 1930.  It’s topped with a modernist clock tower.

At the Palais de Justice (law courts), built in 1925, pigeons slapped their wings against the air, cooed, warbled, and strutted, jutting out their iridescent necks. Pecking at seeds, fruits, plants, and crumbs, they seemed to have taken over the fountain. Moroccan families congregated in the grand square, Place Mohammed V.

We passed the main post office with its arches and stone columns.

La Princière Salon de Thé has a huge stone crown at its roofline. 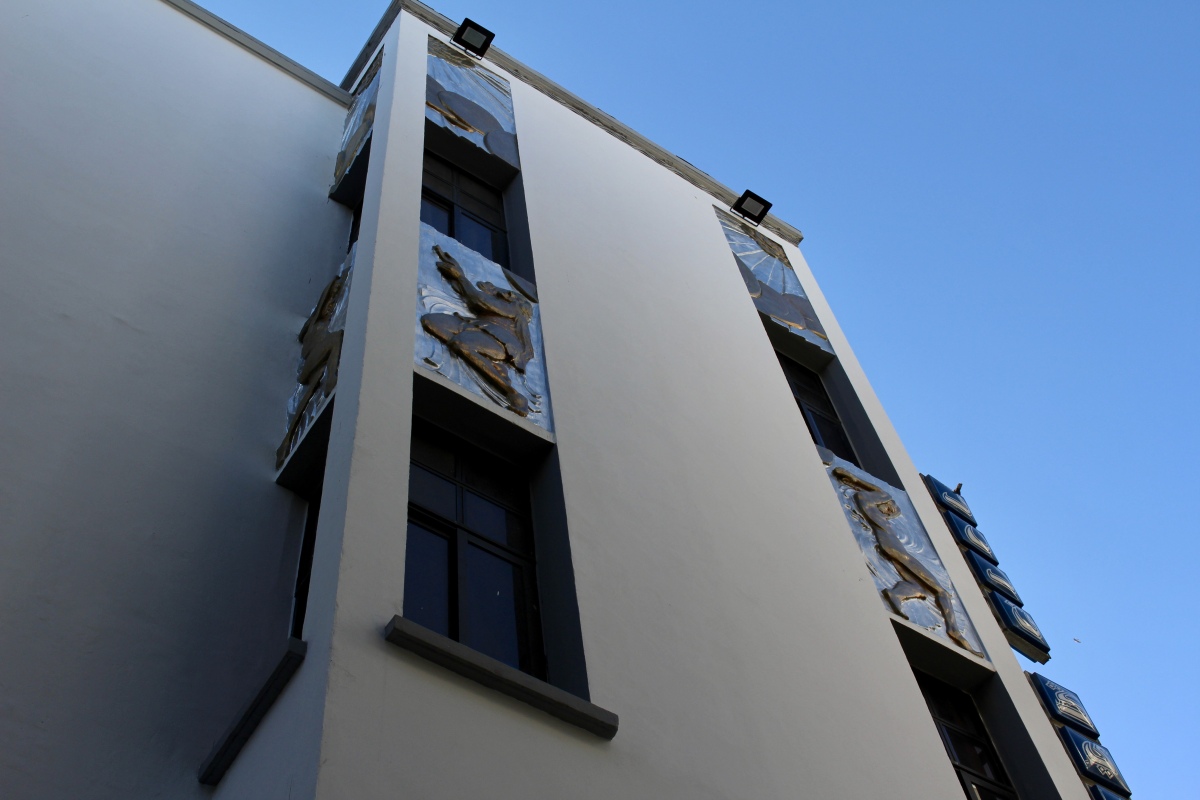 The 1922 Hôtel Transatlantique was beautifully restored and is brightened by lines of colorful flags. 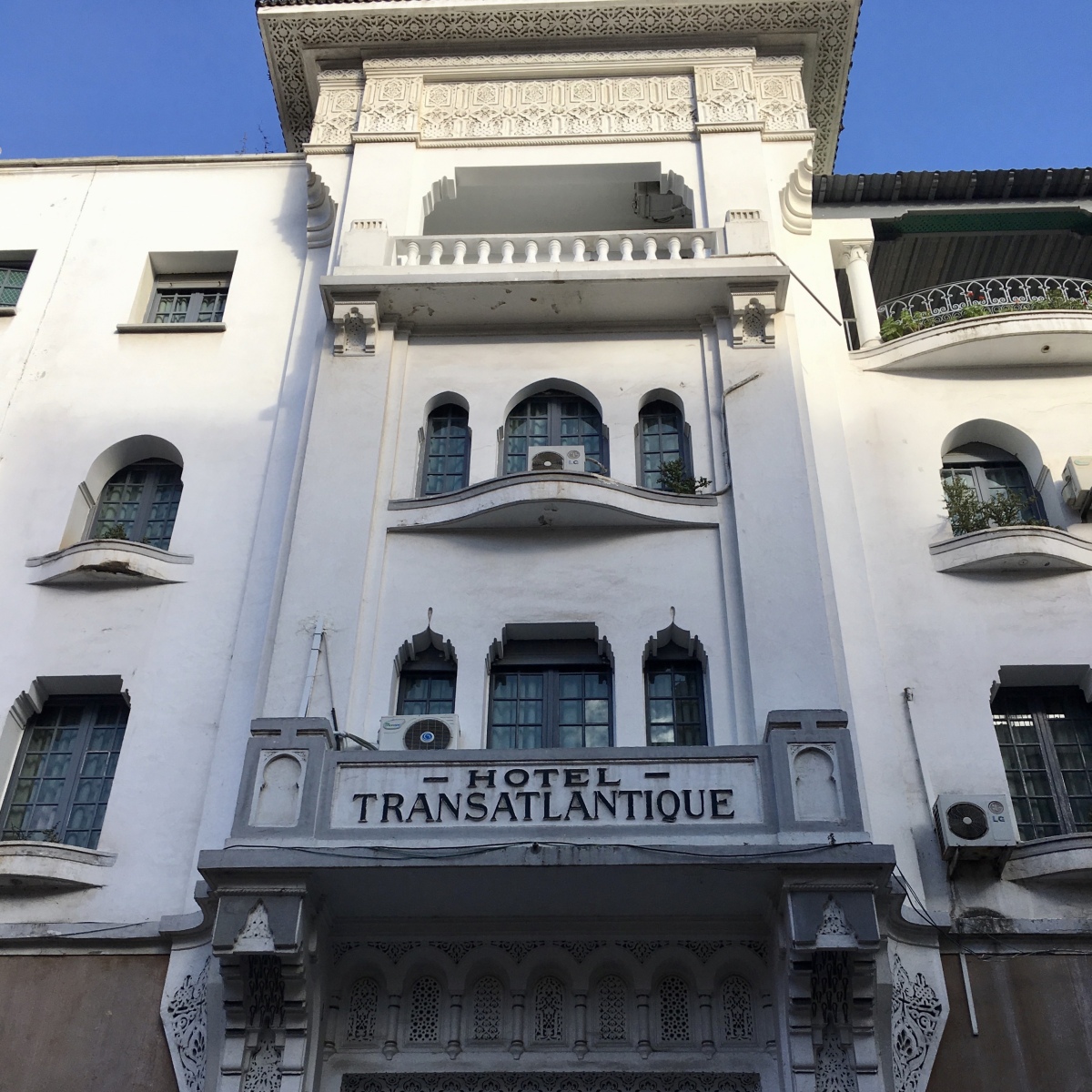 The Hôtel Volubilis also has a great façade.

We passed the derelict shell of the Hôtel Lincoln, now in ruins and covered in scaffolding, but I wasn’t able to get a photo.

We walked past the Central Market Post Office with its delicate carved motifs. 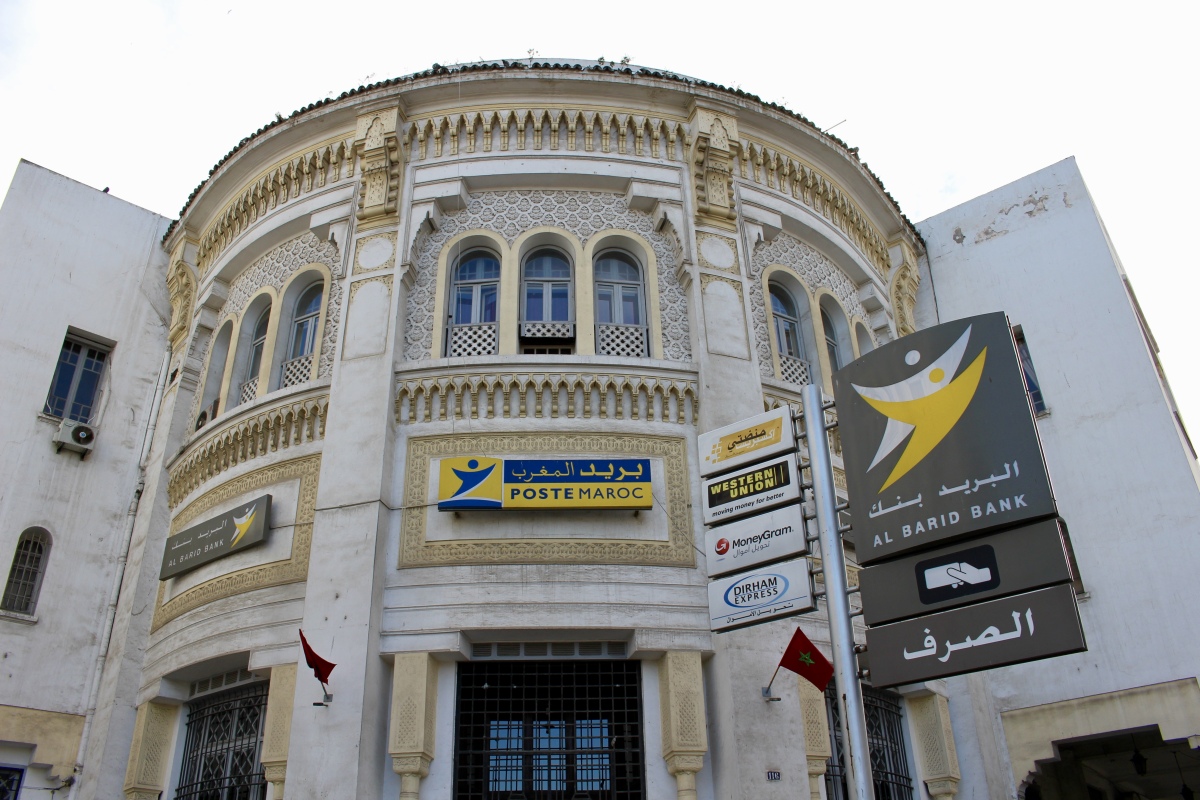 We admired the intricately decorated façade of the Le Matin/Maroc Soir building.

The Petit Poucet bar was once frequented by Antoine de Saint-Exupéry, author of The Little Prince, Edith Piaf, and Albert Camus. 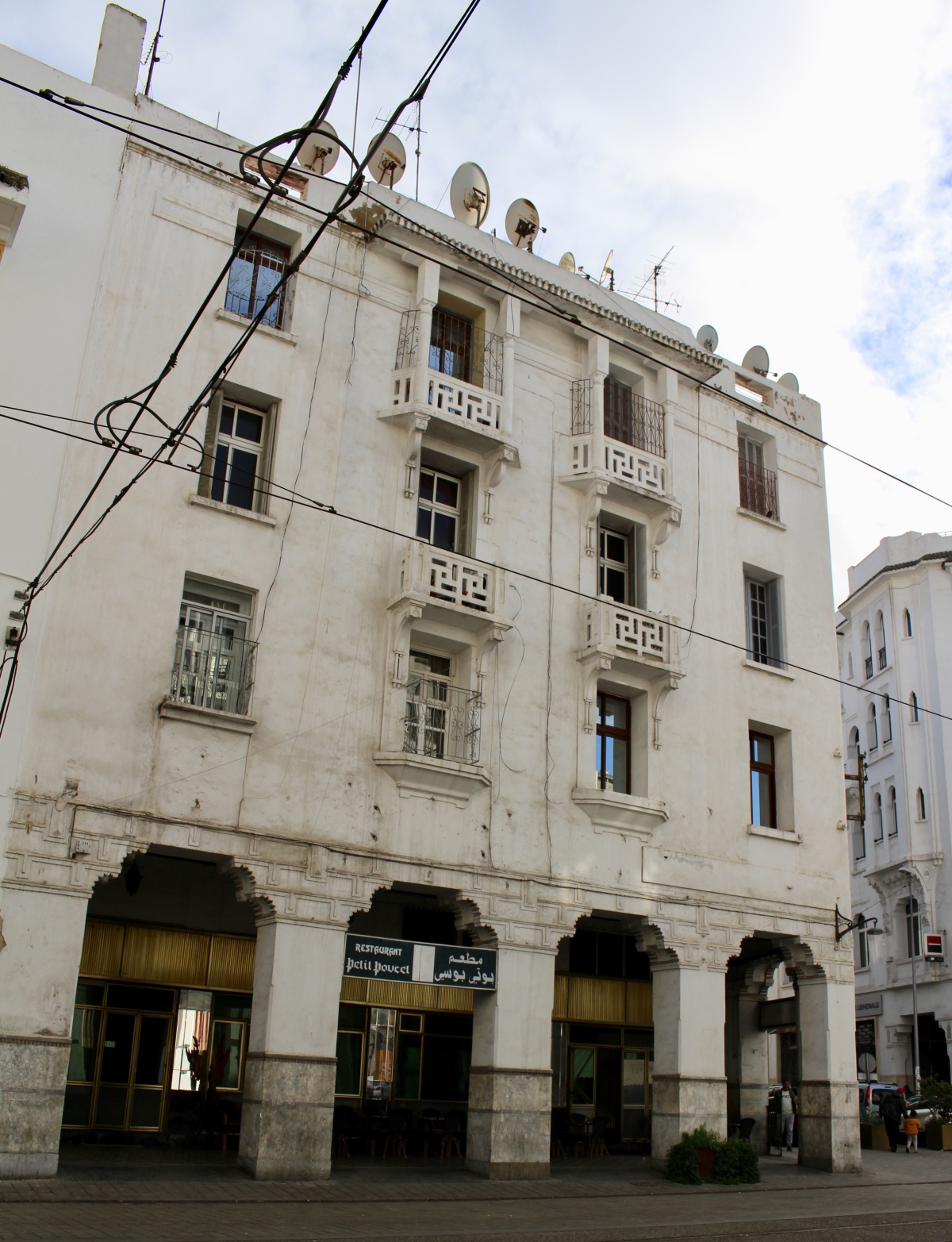 Cinéma Rialto is a classic renovated art deco building. It usually has two showings of the movie on offer, one in the afternoon and one in the evening, usually in French or Arabic with French subtitles.

At Place 16 Novembre is an array of art deco buildings.

After returning to our Airbnb for a rest, we went out for dinner to Le Cuisto Traditionnel, an upscale restaurant where I enjoyed shrimp pil-pil, with plenty of oil and garlic flavoring.  We shared Susan’s huge pyramid-shaped vegetable couscous.  Aziz, the owner, served us graciously in his golden pointed slippers and bright stockings under his djellaba.  We had to do without alcohol as none was served.

Three American women at a nearby table talked loudly the whole time about money.  “It cost $265/day in Tokyo.  Well, it cost $120 in Turkey.”  Figuring out their bill seemed an ordeal as the restaurant’s credit card machine wasn’t working, so they had to pay in U.S. dollars after converting the bill from dirhams to dollars. They discussed the proper payment endlessly in strident voices.

We had Jouhara for dessert – crispy triangular pancakes topped with yogurt and honey.  Then we walked back to our Airbnb to rest up for our next free day in Casablanca before our tour would start Monday evening. We wondered what on earth we’d do to fill the next day.

This post is in response to Jo’s Monday Walk: Christmas in Tavira.