Two days after Christmas, we took off for a 649 mile drive through two states, Virginia and Tennessee, to Nashville.  We loaded the car with coats, gloves and hats aplenty, as frigid temperatures were forecast.

Mike breathed a sigh of relief as we cruised through a small mountain gap on I-66 less than an hour from home; that gap represented leaving the hubbub of Northern Virginia behind.  This highway is not to be confused with the iconic Route 66, which runs from Chicago to Santa Monica, CA.  Perhaps we were moving, although we were still, sitting inside the Toyota RAV watching scenes roll by out the window. White spindly trees and apple orchards clustered around a church steeple, offering up prayers.  Three smokestacks belched smoke as we crossed the Shenandoah River.

As we barreled south on I-81, Van Morrison sang from my 92-song “Highway to Nashville” playlist: “My momma told me there’d be days like this.”  Bucolic scenes whizzed past: a red weathered barn; farmhouses; cows chewing grass behind black split rail fences.  The Massanutten Mountains stretched out under splotchy ironclad skies. Weathered white, red and pistachio-colored barns and silos hunkered down amidst hay bales, shortly interrupted by industry: a Merillat Cabinet Factory and a “Flea Market & Antiques.”

Outside our warm enclosed world, goats congregated around an above-ground swimming pool, a rusty horse trailer, and a pigeon roost. Our Nashville tunes were blasting away and we found ourselves singing along with the country music.

Chris Cagel, after referring to how, in the Bible, God said “Let there be light,” sang:

Let there be cowgirls for every cowboy
Make ’em strong as any man
Something you can’t tame, she’s a Mustang
A heart beat, the harder I am
She’s got a drawl y’all
She’s the salt of the earth and rocks my world

Hungry cows nibbled on a meandering line of hay feed near James Madison University. This part of Virginia is familiar territory; after all, I’ve lived here much of my life, and I thought “I wanna go somewhere where nobody knows, I wanna know somewhere where nobody goes,” like Miranda Lambert sings in “Highway Vagabond.”

We cracked up over Luke Bryan’s song “Country Girl (Shake It for Me):

We were having some fun now!  We sang along with Blake Shelton: “These feelings piling up don’t give me no rest. You be my glass of wine, I’ll be your shot of whisky, I’ll be your honey bee.”

Outside of our cocoon, sheets of plastic wrapped themselves tightly around rows of grapevines and a flock of sheep huddled around a sign for the Woodrow Wilson Presidential Library. Smoke tumbled out of a small barn chimney against a backdrop of mountains painted with periwinkle and pink striations.  Alabama Shakes sang “Always Alright:”  “Well pass me the whiskey, pass me the gin / Pass me whatever there’s drank left in,” while we passed Lexington, Buffalo Creek and three crosses by the road near a sign for Natural Bridge.  Long-bed trucks shuddered past loaded with blue water pipes and other rocket-looking structures, purpose unknown, with environmentally hazardous signs on them.

We agreed these lyrics fit someone we know and love. I could say them about myself at times in my life. My lips felt chapped and ragged, as they often do in winter, and I rubbed grapefruit scented lotion on my hands. On a barn with a nativity scene out front, large letters shouted: “Jesus is the Reason for the Season.”  Soon after, the Purgatory Emporium hurtled past while Miranda Lambert sang “the wheels go round and round.”

A Country Cookin’ billboard and a trailer park kept company; a truck picturing Little Debbie Bars sped by.  We snacked on bananas, cashews, raisins and walnuts.  Luke Bryan wanted to “pour a little sugar in her Dixie Cup” – why not mine? – and blue skies peeked out from the west.  We passed Claytor Lake State Park, Pulaski, Wytheville, Bristol, Dublin and Pearisburg.  FATZ was a food place that didn’t entice.  Instead, we gobbled down an Arby’s beef and cheese sandwich with horseradish sauce and flew past a Fireworks Supermarket.

About 4 1/2 hours into the trip, another hour and a half to the Tennessee border

I was driving when we crossed the Tennessee border, holding my journal in my lap and making sporadic notes, unbeknownst to Mike, who was sleeping.  A billboard greeted us: Hey Knoxville: Your vodka’s ready.  I was suffering a litany of discomforts from sitting in the car for nearly five hours: neck pain, needle pricks in my accelerator foot, lower back pain, and glaring sunlight.  Tennessee is a state of billboards: Brown Squirrel Furniture. The Bourbon Bird. Cupid’s Outlet: Vibes-Lingerie-Novelties-DVDs.

After passing into Central Time Zone, the clock dropped back an hour and we saw Moonshine Headquarters beside a field of brown and white donkeys.  A Pontoon Boat Factory.  A flashing sign warned “NO FATAL CRASH TODAY: ARRIVE ALIVE.”  In Crossville, we saluted C&C Army Surplus and the “Home of the U.S. Chess Federation.”  The Golf Capital of Tennessee. Huddle House: Open 24 Hours.  Pikeville seemed to be the home of porcelain.

In a Shell station where we stopped for gas, we were greeted by a sign outside the restrooms:

Standing in line with some local women, I heard that Tennessee country drawl, reminding me I was now officially in the south!

We headed straight for the Loveless Cafe, a Nashville landmark. Our hilarious waitress Tammy brought me a Strawberry Sipper in a take-home Loveless Cafe mini-mason jar, chicken n’ dumplings, slow cooked green beans, and fried green tomatoes. Mike enjoyed a pale ale and pulled pork BBQ with fried okra and a squash casserole. Country music posters plastered the walls at this classic spot: CASH: DO IT RIGHT NOT WRONG.  WALK THE LINE. 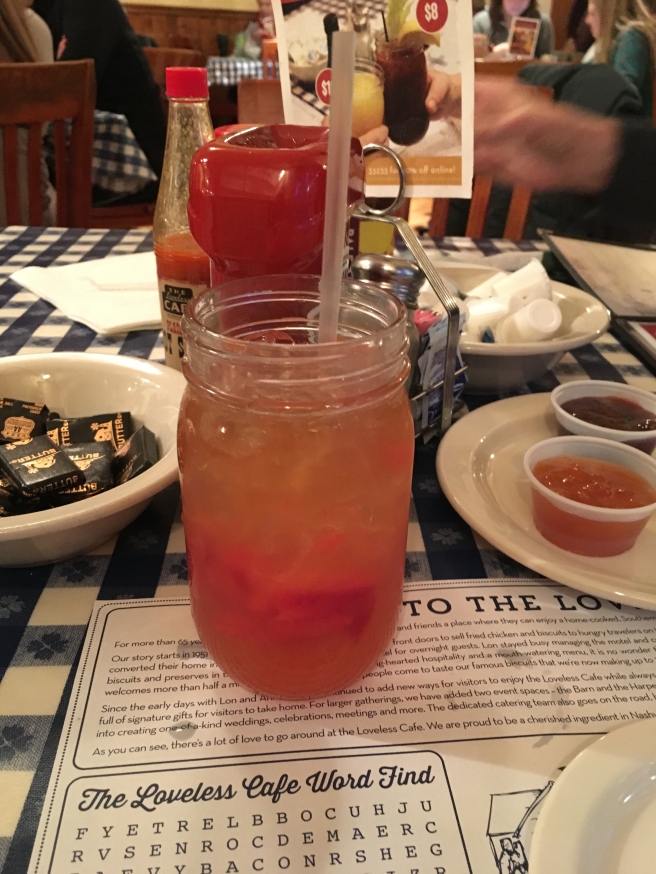 Me at the Loveless after our 10-hour drive

We arrived late at our Airbnb, where the heat seemed almost nonexistent, so we cranked it up.

Our Airbnb in Hillsboro

We took a quick walk through our Hillsboro neighborhood, considered one of Nashville’s most walkable neighborhoods.

We were ready to explore Nashville for the next 3 days!

“ON JOURNEY” INVITATION: I invite you to write a 750-1,000 word (or less) post on your own blog about the journey itself for a recently visited specific destination. If you don’t have a blog, I invite you to write in the comments. Include the link in the comments below by Tuesday, April 17 at 1:00 p.m. EST.  When I write my post in response to this challenge on Wednesday, April 18, I’ll include your links in that post. My next post will be about my road trip to Pittsburgh, Pennsylvania.

This will be an ongoing invitation, once weekly through April, and monthly after that. Feel free to jump in at any time. 🙂