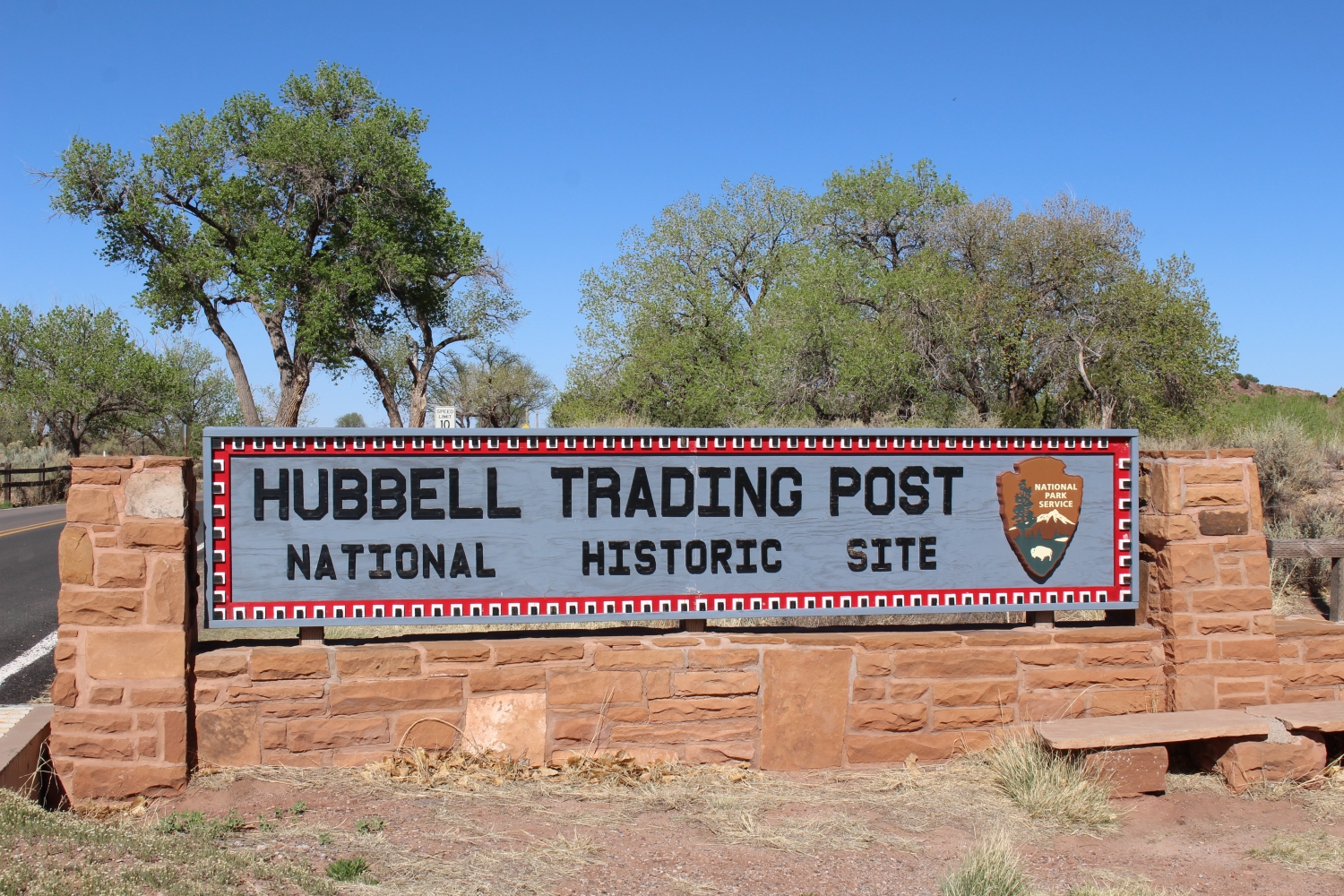 In 1846, when the U.S. took possession of the southwestern territories after the war with Mexico, the Euro-American inhabitants were promised protection from “war-like” tribes such as the Navajo and Apache.  The U.S. built military posts to protect them.  The Navajo (Diné) resisted this intrusion into their sacred land.  When General James H. Carleton came to believe gold existed within Navajo country, he decided to establish a military post in the heart of the gold country. In 1863, Carleton ordered Colonel Christopher “Kit” Carlson to follow a “scorched earth” policy: to destroy Navajo subsistence by burning crops and killing livestock. The soldiers broke up family units and massacred men, women and children. Faced with starvation and loss, the Navajo surrendered during the winter of 1863-1864.

After surrendering, more than 9,000 Navajos were force to march in “The Long Walk,” over 300 miles to a flat, 40-square-mile wind-swept reservation in east-central New Mexico, known as Fort Sumner.

The reservation experiment was doomed from the start. The Navajo’s crops were destroyed by pests, drought and hail.  Irrigation water contained too much salt and destroyed the land’s productivity. Thousands died from diseases, starvation and exposure.

After General William Sherman arrived to investigate the Diné’s complaints, the two sides soon signed the Treaty of 1868.  The Diné could return to their homeland, but sadly their homesteads had been destroyed.  Because of the devastation, trading for food and products became vital.

John Lorenzo Hubbell, born in 1853 in Pajarito, New Mexico Territory, learned the life, customs, and language of the Navajo while working as a clerk and Spanish interpreter at forts and trading posts. Known as Don Lorenzo to Hispanics, and Naakaii Sani (Old Mexican) or Nak’ee sinili (Double Spectacles) to the Navajo, he began trading at Hubbell Trading Post in Ganado, Arizona as the Navajo struggled to adjust to reservation life after the brutal ordeal of The Long Walk.  Local tribes congregated at the post, where Hubbell was merchant and liaison to the outside world.  He translated and wrote letters, settled quarrels, and explained government policy.  He opened his house as a hospital in 1886 during a smallpox epidemic.

For 50 years, Hubbell was known for his kindness and friendship, honest business dealings, and wise counsel to American Indians. He often served as an intermediary between the Anglo-American and Navajo cultures, and sought to improve mutual understanding between them.  He died in 1930 and was buried on a hill overlooking the trading post.  Now preserved by the National Park Service as a national historic site, American Indians still bring handcrafted rugs, jewelry, pottery and baskets to the trader.  Locals buy groceries and share stories.

In 1965, Congress made Hubbell Trading Post a national historic site with the understanding that it would remain a business operation, a working trading post. 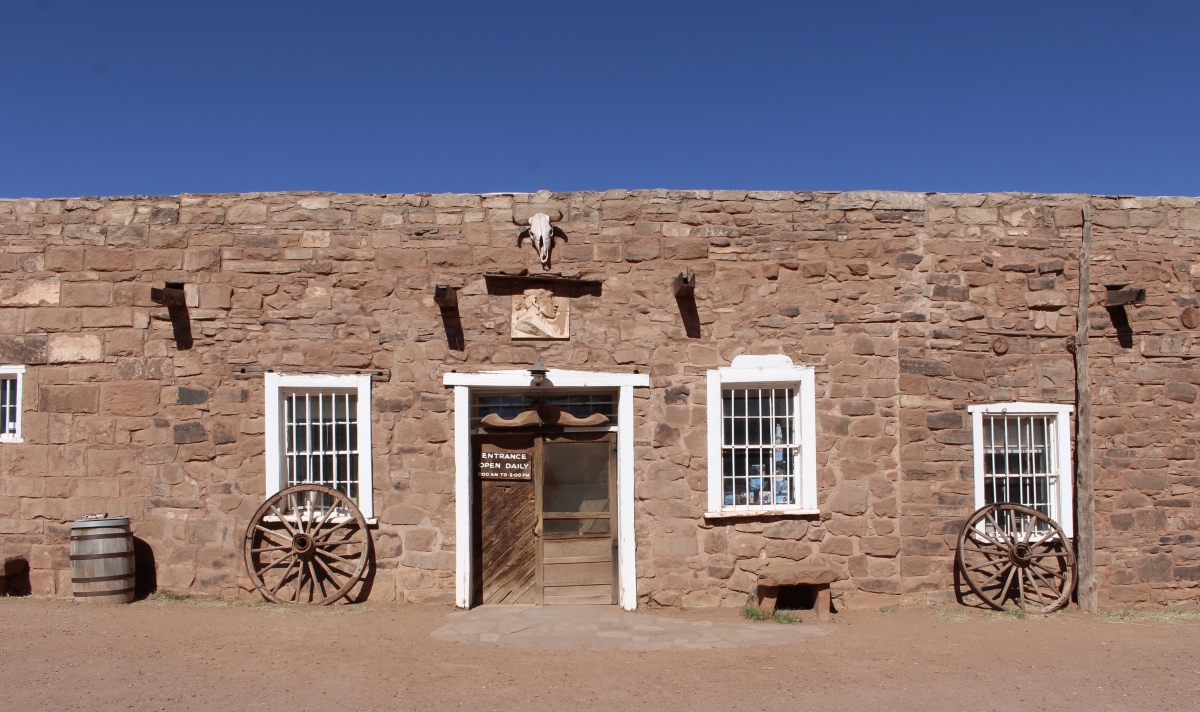 Inside the trading post, one can buy cowboy coffee, foodstuffs, dishware, cloth, blankets, utensils, pottery, Hopi baskets, handcrafted Navajo rugs, and turquoise jewelry. The room shown below is the bullpen, a cozy room to socialize and trade for staples.  It is little changed since 1876, with its creaky wooden floors, tall counters, high shelves, and iron stove.  Only the merchandise is new.  The prices are definitely modern-day and steep.  A pair of turquoise earrings I liked cost $250, and small Navajo rugs ran $450-$1,300. 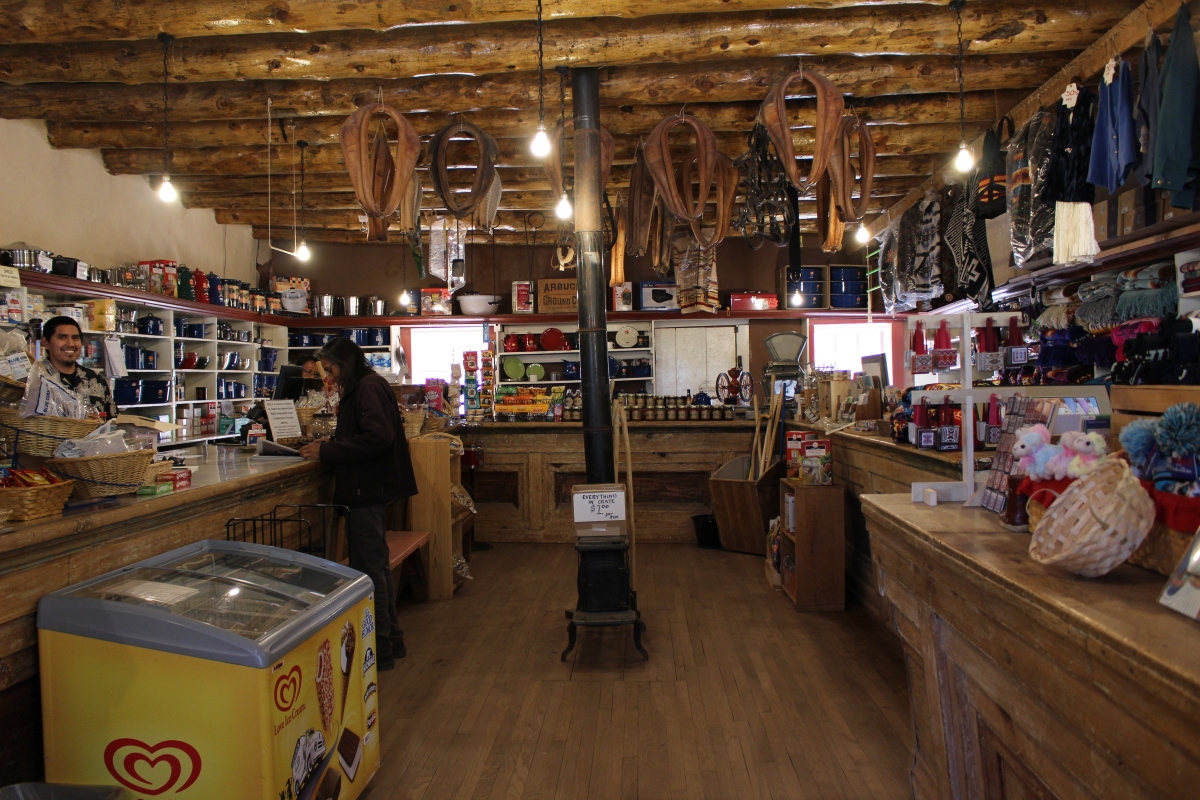 When completed in 1900, the two-story barn on the grounds was the largest in northern Arizona. The corral outside was used for livestock.  Some held sheep by categories: ewes with lambs; yearlings; and rams, aged and market-ready. Other corrals held horses, mules, or milk cows. 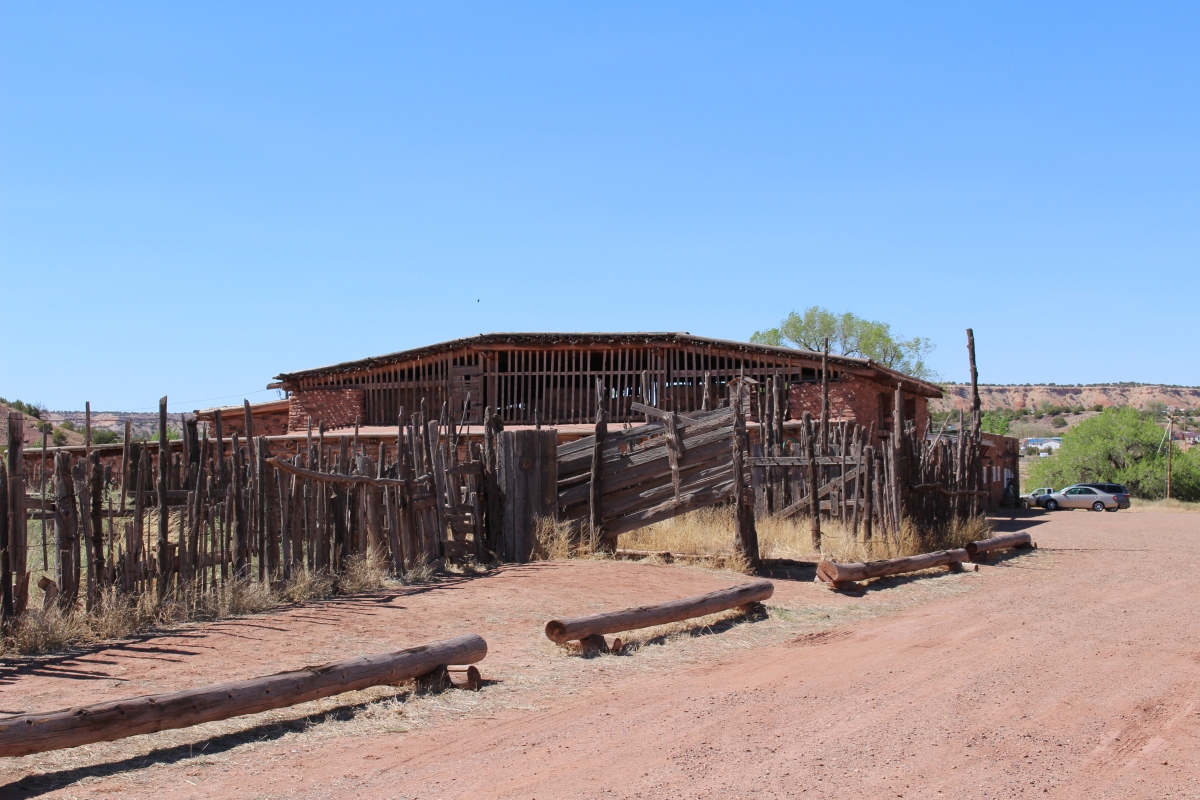 It was a windy day when I visited, and the gate creaked as the wind blew it to and fro. 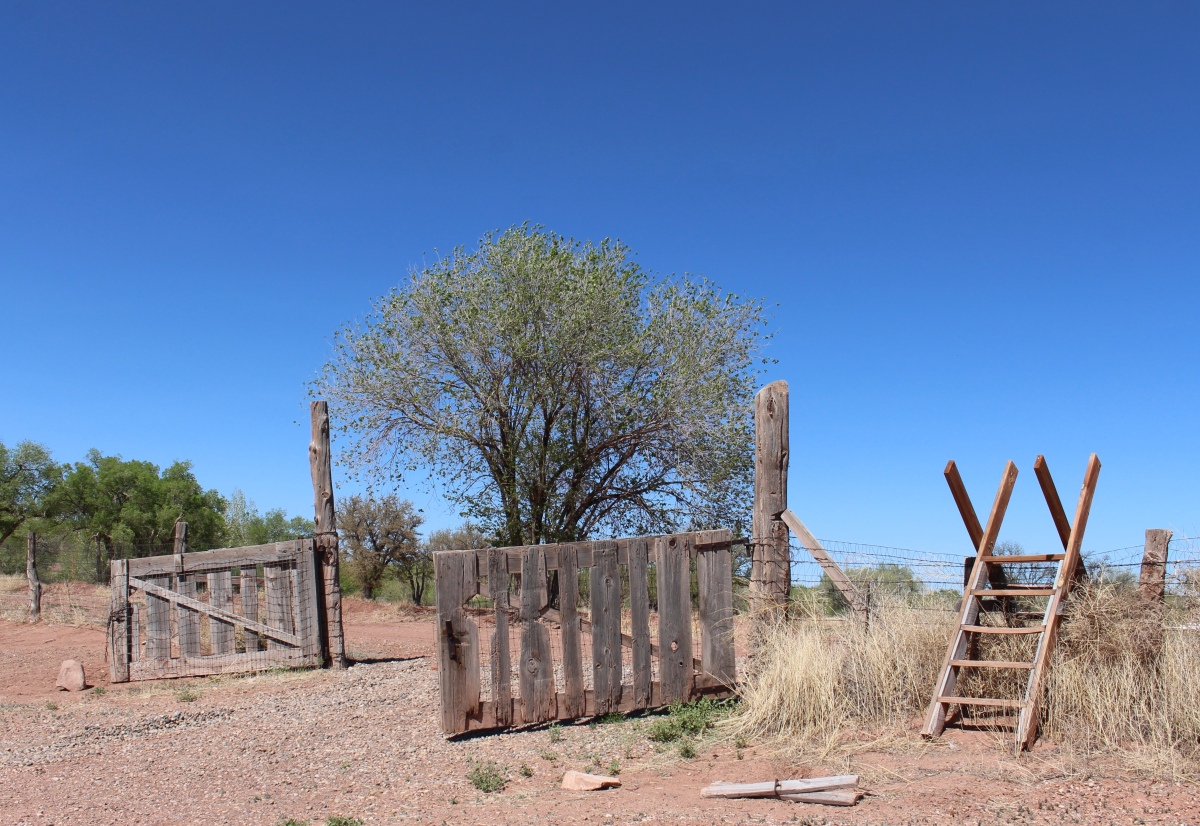 Pale green leaves of white-barked silver poplars rustled in the breeze.  I was mesmerized by the sound and sight of them.  It was so breezy and pleasant here, I didn’t want to leave. 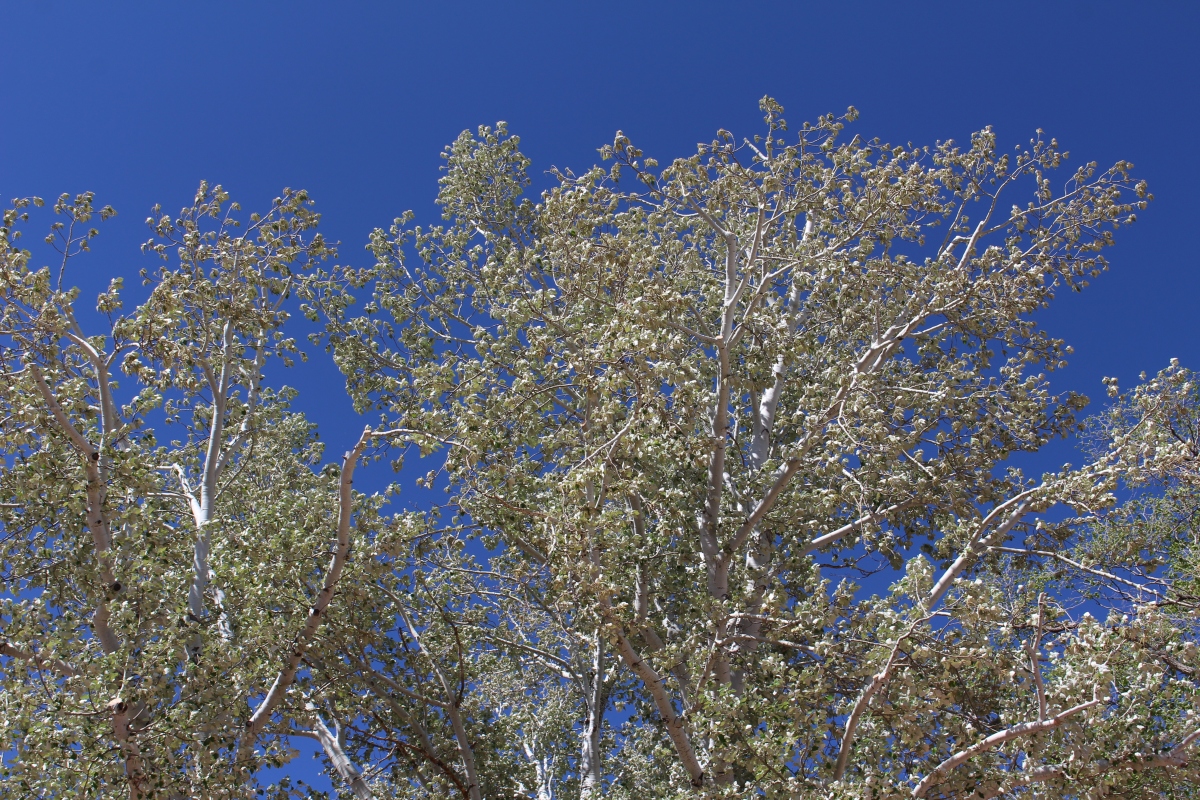 Heading to Window Rock and Gallup, I passed Fish Wash, Kinlichee, and Defiance Plateau.  Tall Ponderosa pines lined the road. Window Rock, Arizona is the capital of the Navajo Nation, a decent-sized town through which dust-coated pickup trucks drive.

Window Rock Navajo Tribal Park has a red stone arch for which the capital is named.  Navajo Nation government offices surround the park.  Recently, Navajos built a Veteran’s Memorial at the base of the rock to honor Navajos who served in the U.S. Military.  Code Talkers used their native language to create a code that was never broken by the enemy.  Historians credit Code Talkers for helping win WWII.  The park is meant to be a healing sanctuary for reflection and solitude. 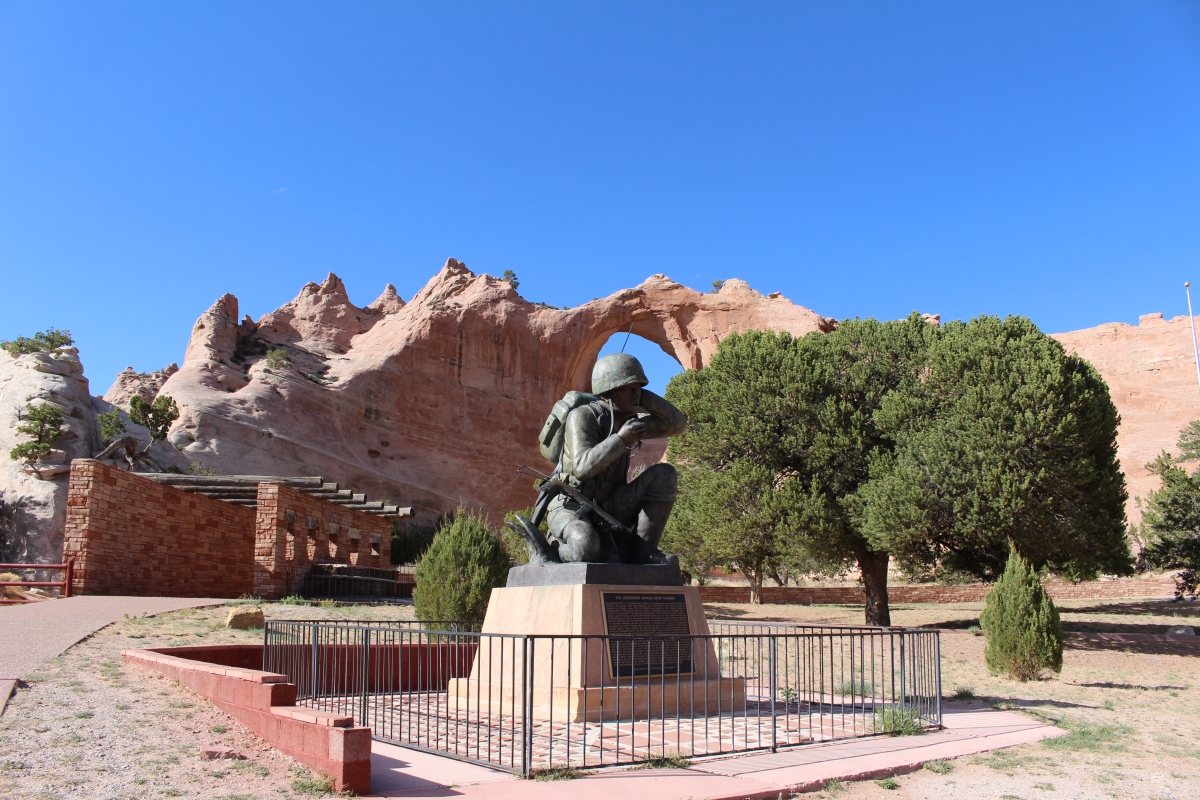 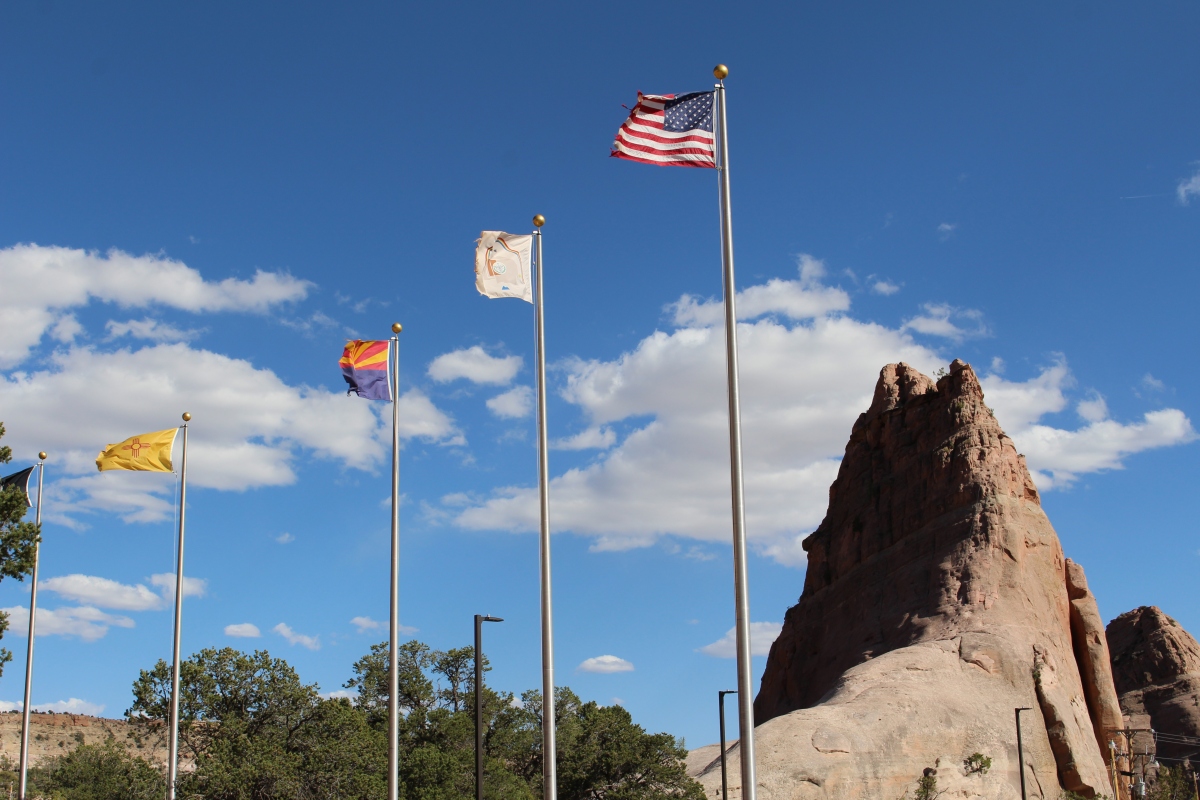 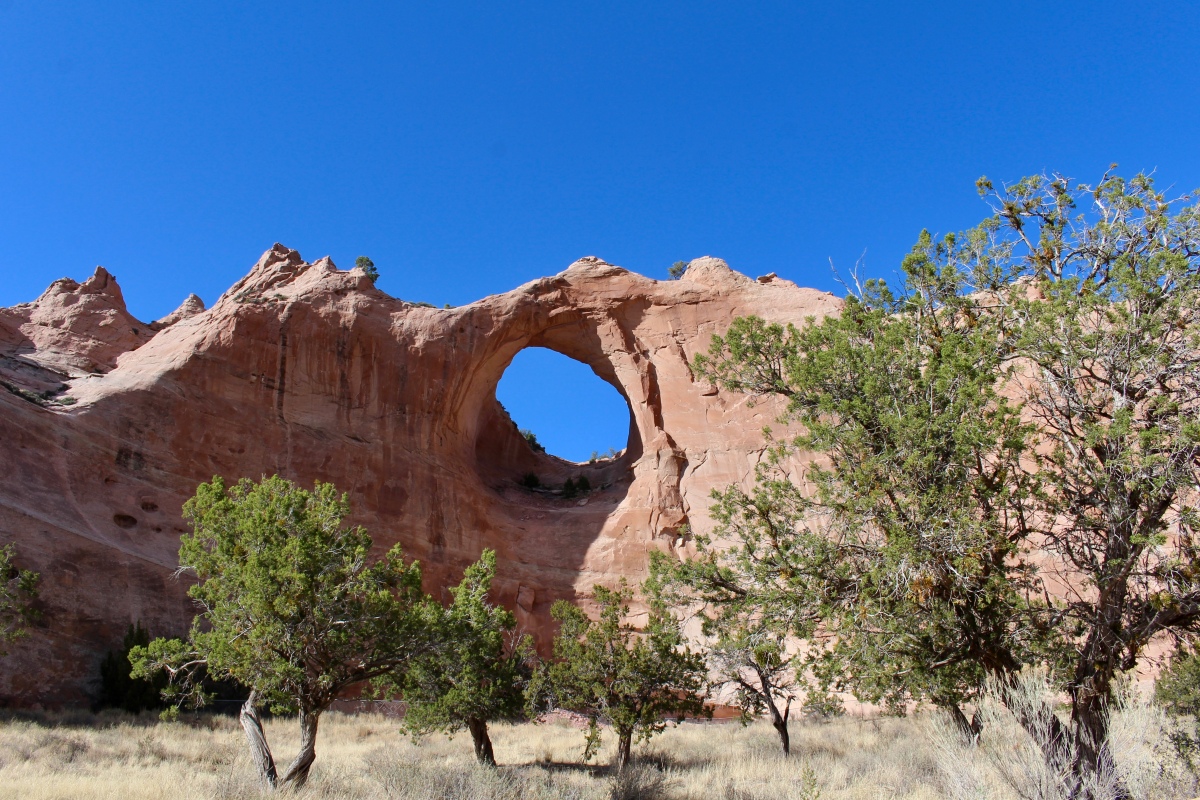 And of course, I got my stamp and cancellation stamp. 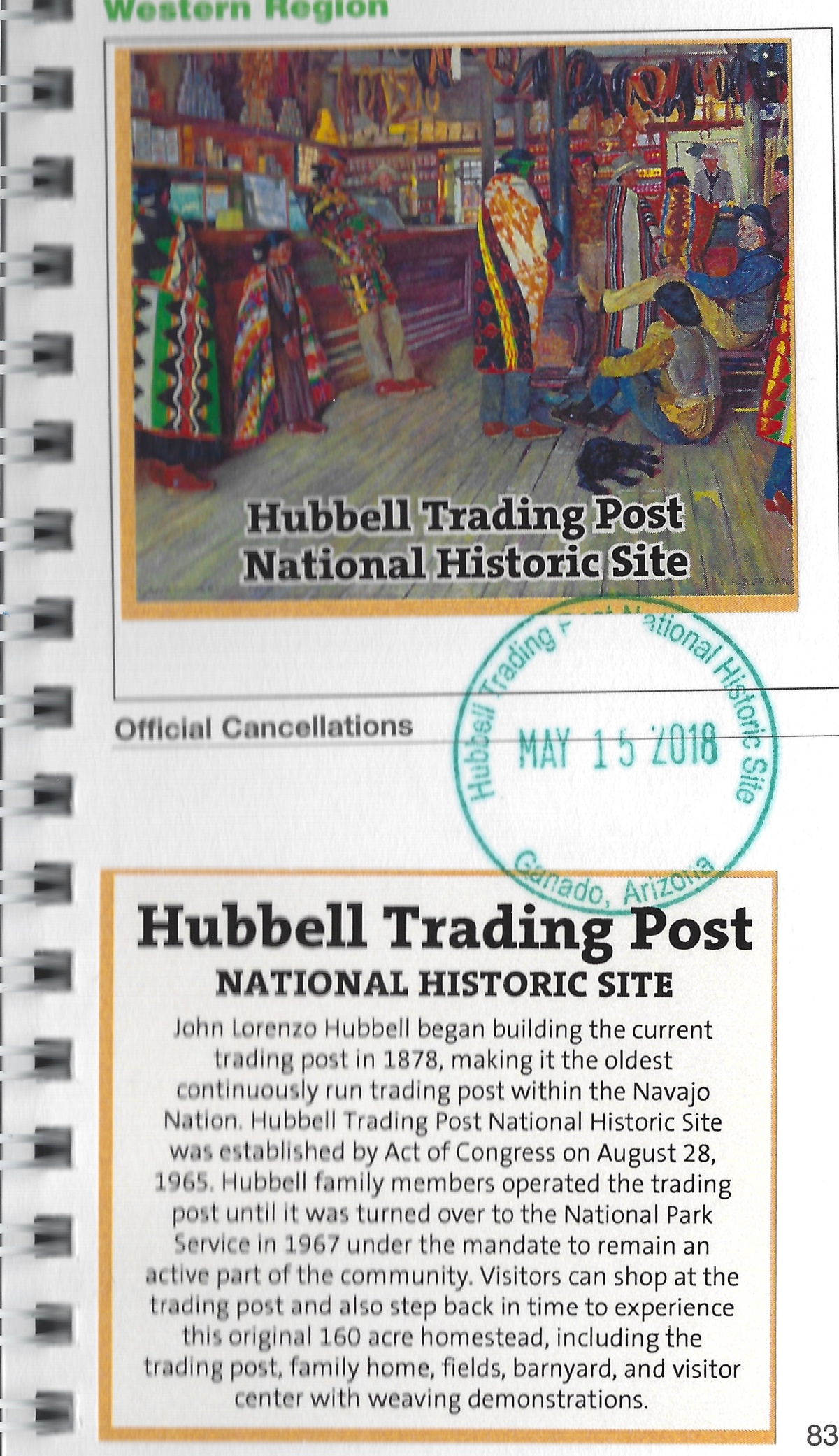 Information above came from various brochures created by the National Park Service.

I challenge you to post no more than 20 photos and to write less than 500-800 words about any travel-related photography intention you set for yourself. Include the link in the comments below by Wednesday, January 16 at 1:00 p.m. EST.  When I write my post in response to this challenge on Thursday, January 17, I’ll include your links in that post.

This will be an ongoing invitation, every first and third (& 5th, if there is one) Thursday of each month. Feel free to jump in at any time. 🙂