As we got comfortable on our United Flight flight #65 leaving at 10:15 a.m. from Lisbon, Portugal on Tuesday, November 6, 2018, we were told by the pilot that our plane didn’t have the capacity to carry all passengers plus enough fuel to get us to Newark, New Jersey due to stronger than expected headwinds.  Our flight was scheduled nonstop to Newark, arriving at 1:50 p.m. As there are always headwinds flying west, and as the airline knew the plane was fully booked, we wondered why they had put us on this particular plane which was unable to get us to our destination!

We were scheduled to take a flight from Newark at 5:10 p.m., arriving at Washington-Dulles at 6:35 p.m. that same day.

Airline officials started going up and down the aisles telling various people they had to get off the flight.  It turned out these people were standby flyers.  Requiring them to disembark also meant that all luggage had to be taken off the plane and sorted through, in order to remove the luggage of the standby passengers.  This took a good hour or more. We were quite worried when it became clear that our safe arrival in Newark could only be guaranteed by a few people disembarking. That seemed a slim margin of error!

After all this was done, the pilot got back on the loudspeaker and told us that removing all the passengers and their luggage still didn’t reduce the plane’s weight enough to make it to Newark.  Thus they would have to find an airport that would allow the plane to make a fuel stop.  After quite some time, they announced that Gander International Airport,  located in Gander, Newfoundland and Labrador, Canada, would allow the plane to land there for a fuel stop.  That meant the pilot had to file a new flight plan, and since the computers were at that point not operational, we would have to wait a while for the computers to work again.

During this time, all the standby passengers were loaded back on to the plane along with their luggage.

By the time we left Lisbon, it was three hours after the flight was due to take off, about 1:15.  We then flew to Gander without incident, arriving around 3:30 p.m., equivalent to 5:00 p.m. Eastern Standard Time.  Our plane from Newark to Washington would be leaving in about 10 minutes, and we were up in the hinterlands of Canada!

As soon as we taxied into the Gander Airport our flight captain announced the good news that we had landed in Gander safely and would fill up with fuel.  The bad news, however, was that the flight crew’s allowed hours had timed out because they’d been sitting on the ground so long in Lisbon; thus, they were no longer able to fly.  We would have to wait at Gander until a new flight crew was flown in from New Jersey!

It didn’t become clear to us until we settled in that we’d be stuck in the middle of nowhere for the long haul.  It turned out we would be at Gander for five hours.  This small airport had no other air traffic while we were there, and when we arrived no concessions were open.  Saving the day, the airport officials called the local workers in to open the cafeteria; food choices were limited but at least we could have some food and drink.  We indulged in cold hamburgers and the famous Canadian dish, poutine: French fries and cheese curds topped with gravy.

Gander may be in the middle of nowhere, but it is known for its hospitality. On September 11, 2001, with United States airspace closed because of the terrorist attacks, Gander International hosted 38 airliners, totaling 6,122 passengers and 473 crew, as part of Operation Yellow Ribbon, which was organized by Canada to handle the diversion of civilian airline flights on 9/11. Canada’s goal was to ensure that potentially destructive air traffic be removed from United States airspace as quickly as possible, and away from potential U.S. targets, and instead place these aircraft on the ground in Canada, at military and civilian airports in the Canadian provinces of Nova Scotia, Newfoundland and Labrador, and British Columbia. None of the aircraft proved to be a threat, and Canada and Canadians hosted thousands of passengers stranded in Canada until U.S. airspace was reopened.

Gander International received more flights than any other Canadian airport involved in the operation apart from Halifax.

There was little to no wi-fi in the airport during our stay.  Meal tickets were issued by the airline but only AFTER we’d already eaten, and no refunds for previously purchased food were issued.  It was a long and excruciatingly boring wait, and there was nothing to do but wait.  No flights came into or left Gander while we were there and thus we couldn’t book another flight.  There were no options for escape. 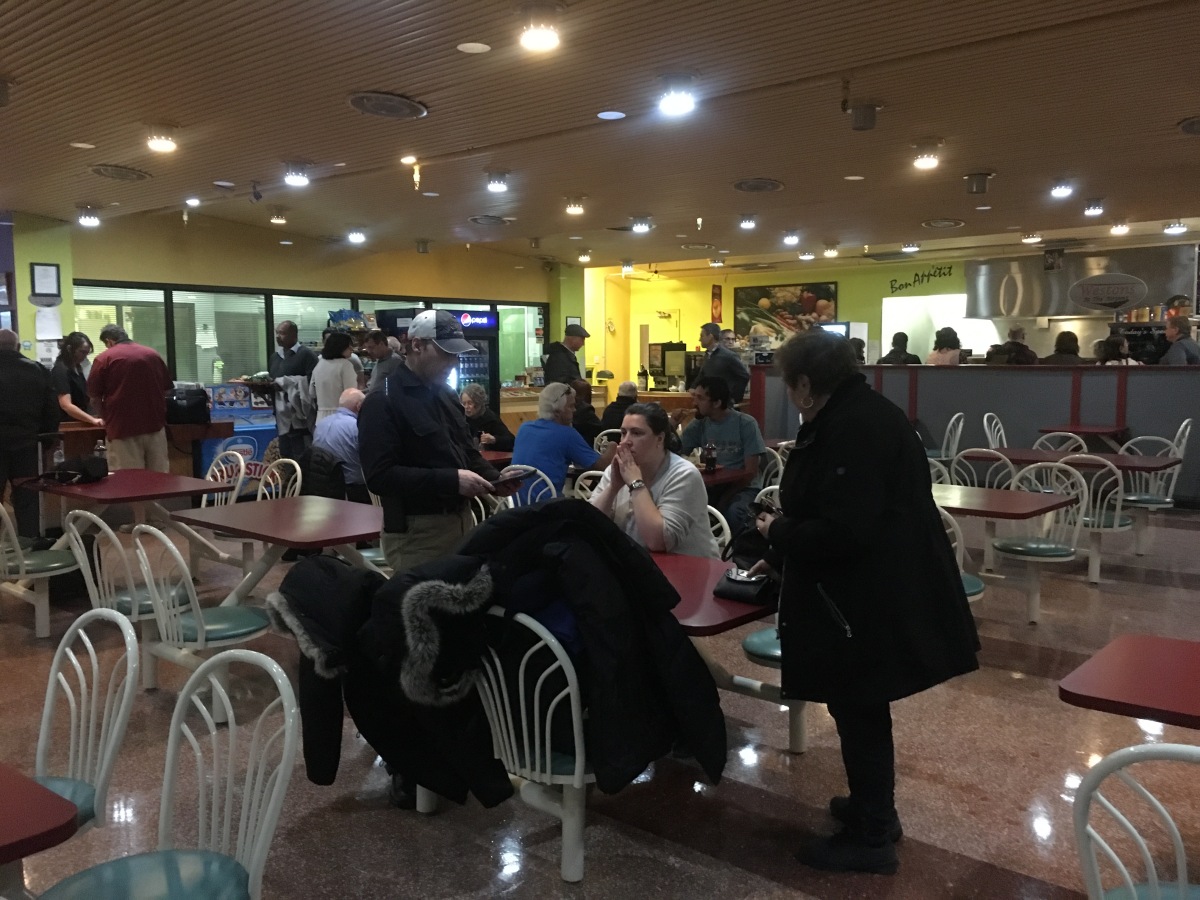 waiting and waiting at Gander

When it became evident that we would not make the last flight to Washington out of Newark, we decided we’d better take our fates into our own hands.  As soon as we got off the plane, we headed straight for car rentals, and rented a car to drive home.  By the time we started driving, it was close to midnight. We had been awake for about 24 hours at this point and were exhausted and irritable, but we had to drive another five hours to get home. Luckily at that time of night there was no traffic.

We finally collapsed in our beds at 5 a.m. on Wednesday morning, November 7.  My Camino and Portugal trip came to a difficult and painful end, but it was all worthwhile.  Mike rested for a couple of hours and went to work by noon.  It took him a whole week to recover.  We calculated we were either traveling in cabs, planes or cars, or waiting in airports for 28 hours straight.

I was less excited about my time in Portugal than I was when I went in 2013.  First, the weather was not optimal.  It was often cold and rainy in late October / early November. We had beautiful weather in Braga and our first day in Porto; otherwise it was mostly rainy, gloomy or cold.  Mike enjoyed himself everywhere other than Sintra, as it was his first time to Portugal and he had nothing else to compare it to.

My favorite parts of Portugal on this trip were: Braga, Guimarães, Amarante (except for the gloom), Óbidos and Peniche.

My favorite place in 2013, Sintra, was a real letdown because of heavy fog and huge crowds. Lisbon was cold, windy and cloudy, and there was really nothing new for me to see. I don’t feel a need to ever return there.

Camino and Portugal as shown on my polarsteps app

Here are posts that I wrote following my creative intentions:

I still have several more posts to write, including another list poem and a poem weaving together six things I encountered in my travels.  I have a couple more photo essays to compose: black & white photos, local people, boats & the sea, and colors & stripes, food, and enticing signs and shops.

If I ever do return to Portugal, I would go to the Algarve and the beaches, taking my cues from Jo of restlessjo.

Include the link in the comments below by Sunday, December 1 at 1:00 p.m. EST.  When I write my post in response to this challenge on Monday, December 2, I’ll include your links in that post.

This will be an ongoing invitation on the first Monday of each month. Feel free to jump in at any time.

Travel, adventure and what to do