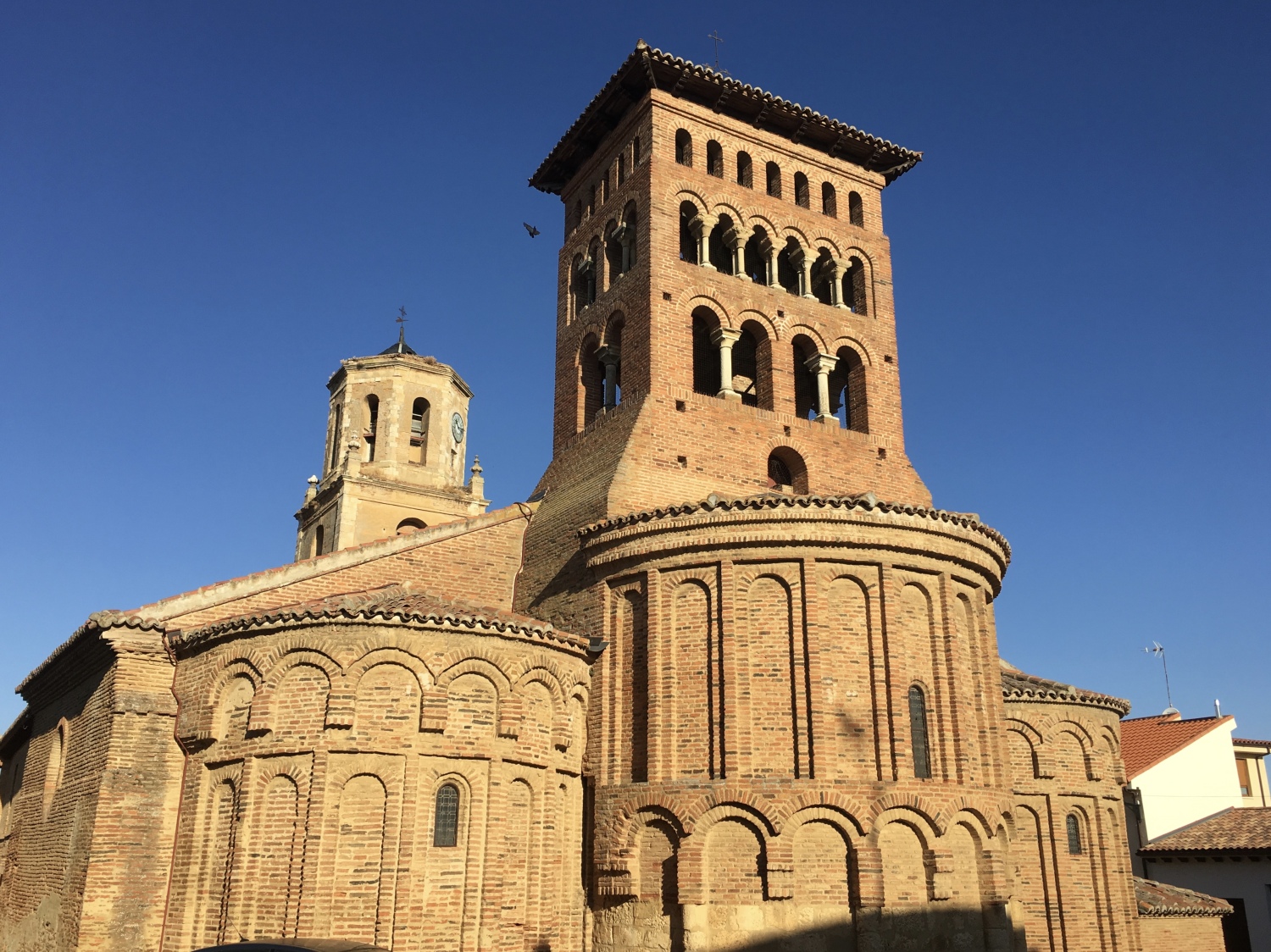 I got a late start, at 7:35 a.m., because I was hesitant to leave the French tunes wafting through the atmospheric Albergue Laganares.  I lingered over a café con leche and banana at the bar, while the curly-headed proprietor’s brunette wife, with her mischievous smile, playfully flirted with her husband.

I had to leave, however, as pilgrims are obliged to do. I was out of the town in no time, my hiking boots crunching on a gravel path alongside a road. The landscape offered little variety, although clusters of trees popped up periodically.

I left behind the province of Palencia and crossed into Provincia de León, part of the autonomous region of Castille y León with a population of 495,000.  It is known to offer the most varied terrain on the Camino.  I continued on the Tierra de Campos, with its flat and well-irrigated farmland.

I crossed the río Valderaduey to the 12th-century sanctuary Ermita Virgen del Puente, or Our Lady of the Bridge, a Mudéjar-style chapel with Romanesque foundations sitting in a shady poplar grove.  The pilgrim hospice has long vanished. 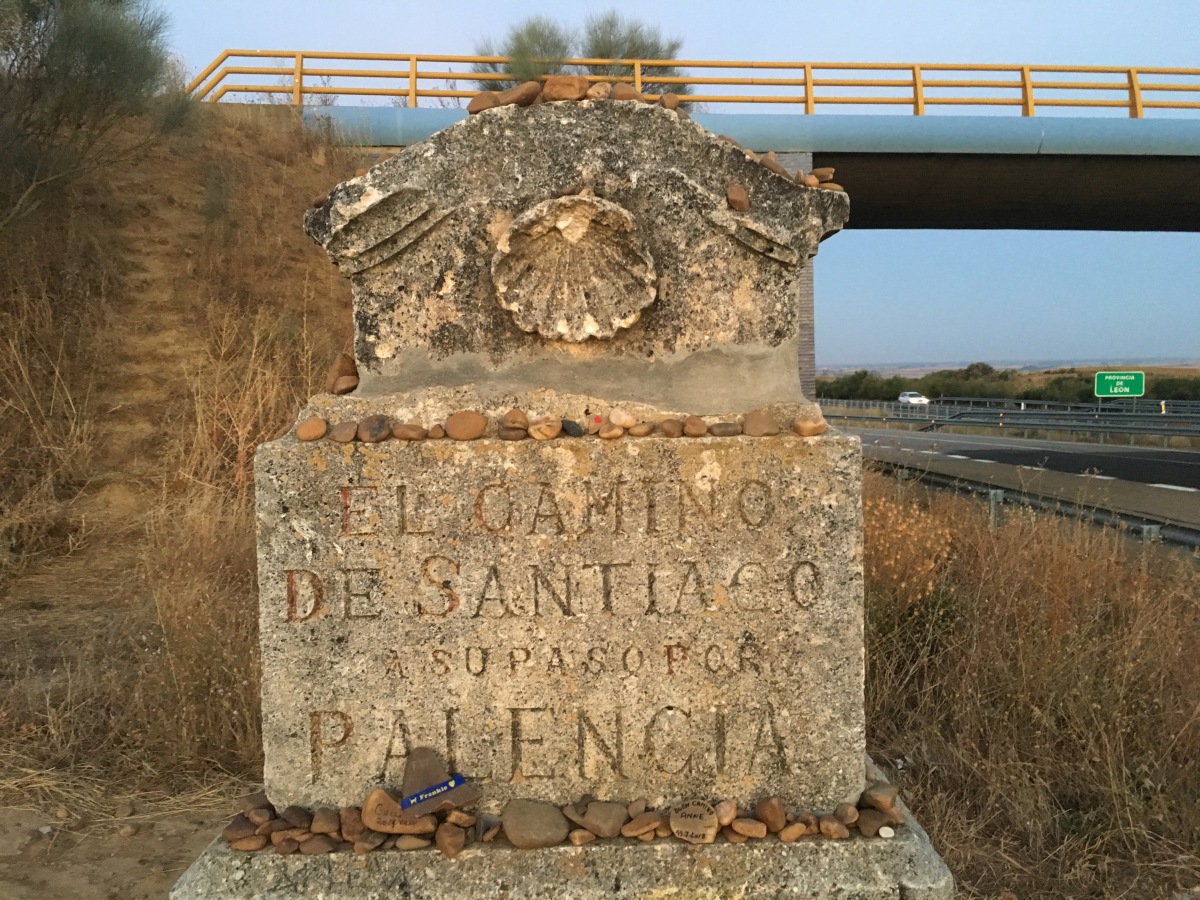 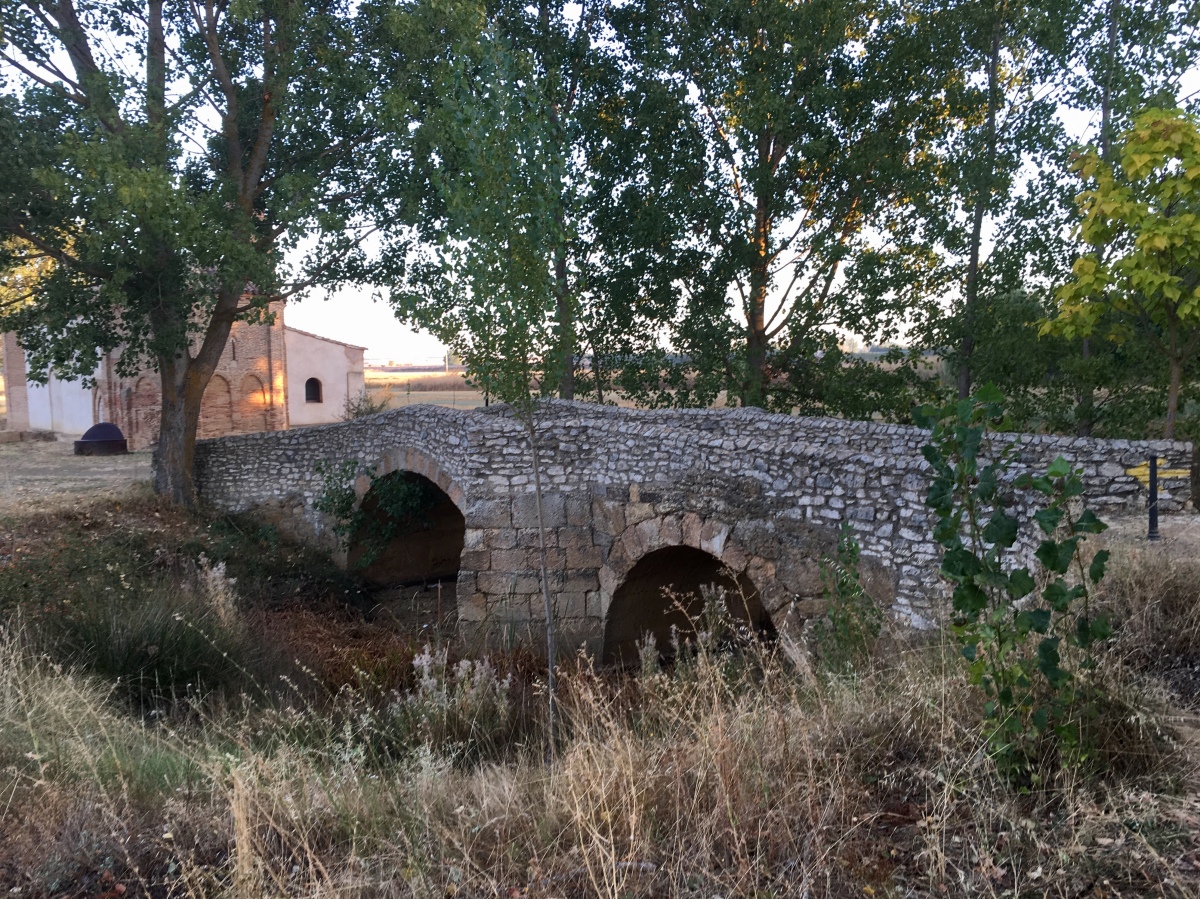 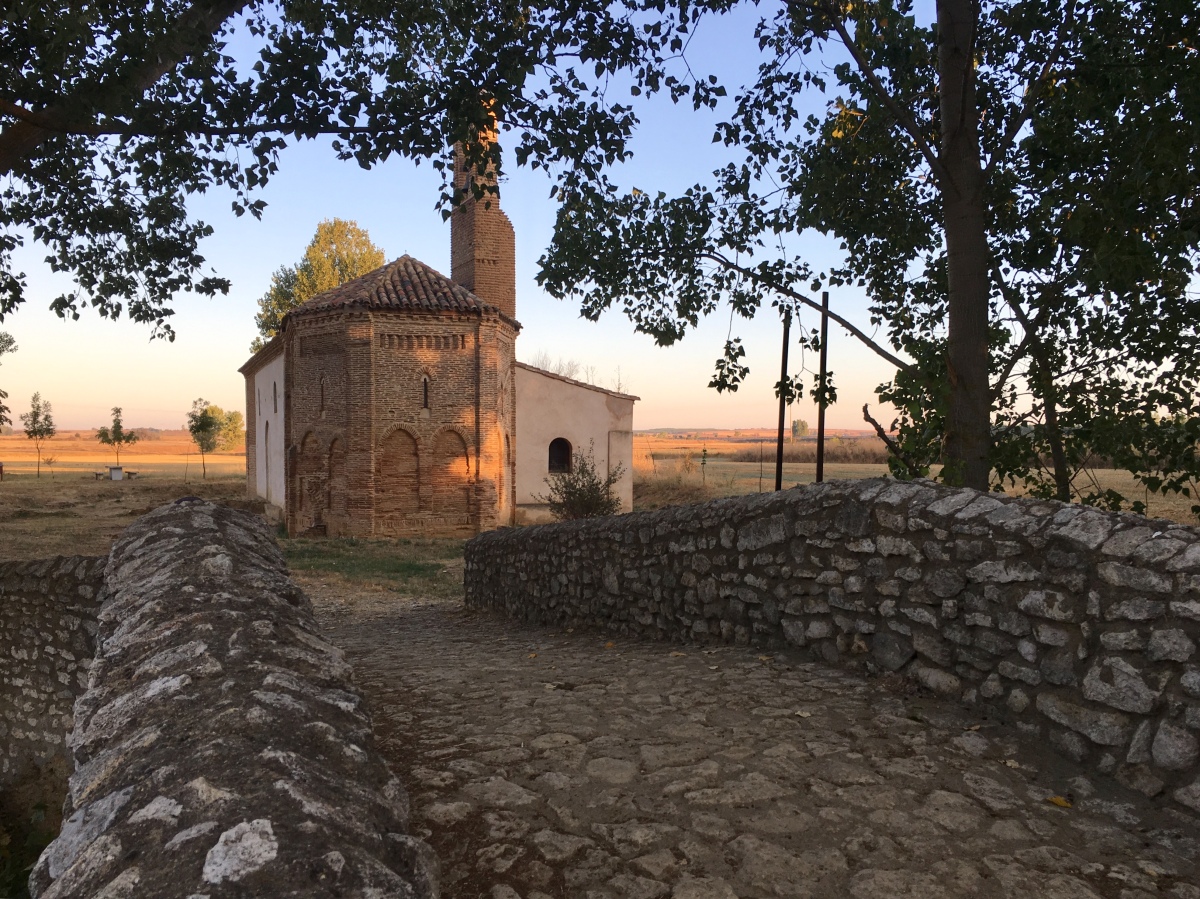 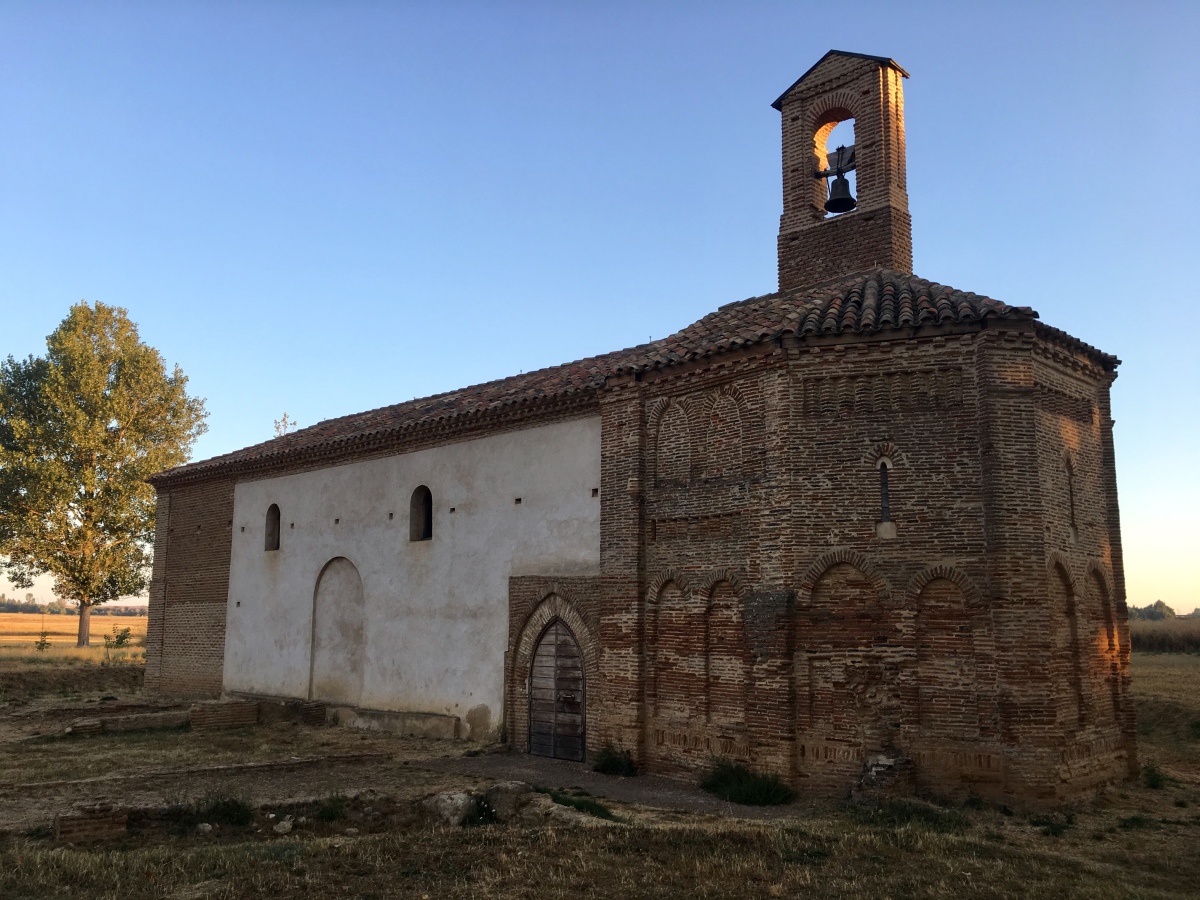 The walk to Sahagún wasn’t bad. It was cool and the scenery was pleasant despite the walk being alongside a road.

Sahagún, with its population of 2,800, is a seat of ecclesiastical significance that prospered under the powerful order of Cluny, which at one time controlled as many as 300 monasteries and churches along the Way. Alfonso VI and his various wives are buried in the Benedictine convento de Santa Cruz. 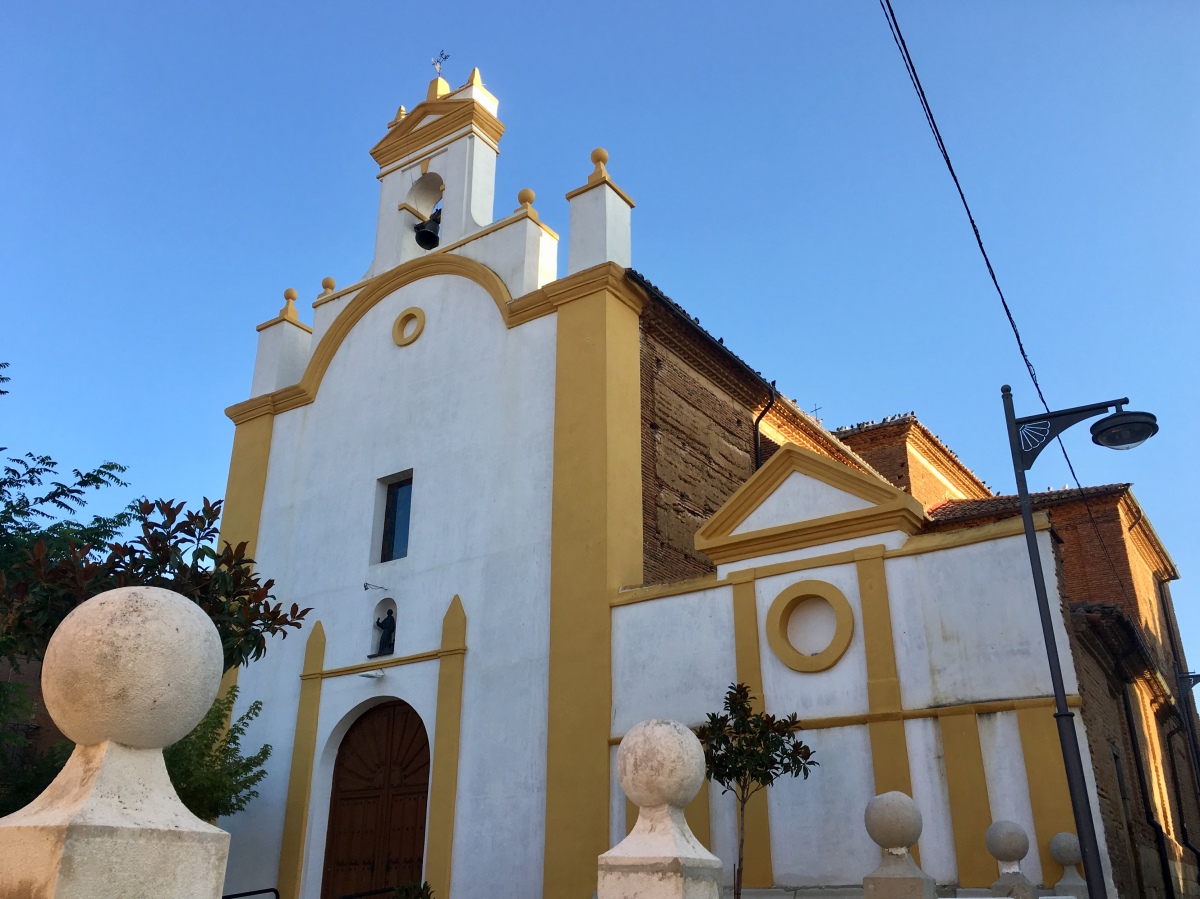 I also admired the 12th-century Iglesia San Lorenzo (Saint Lawrence), a fine example of the brick Mudejar style with its great bell tower full of windows. 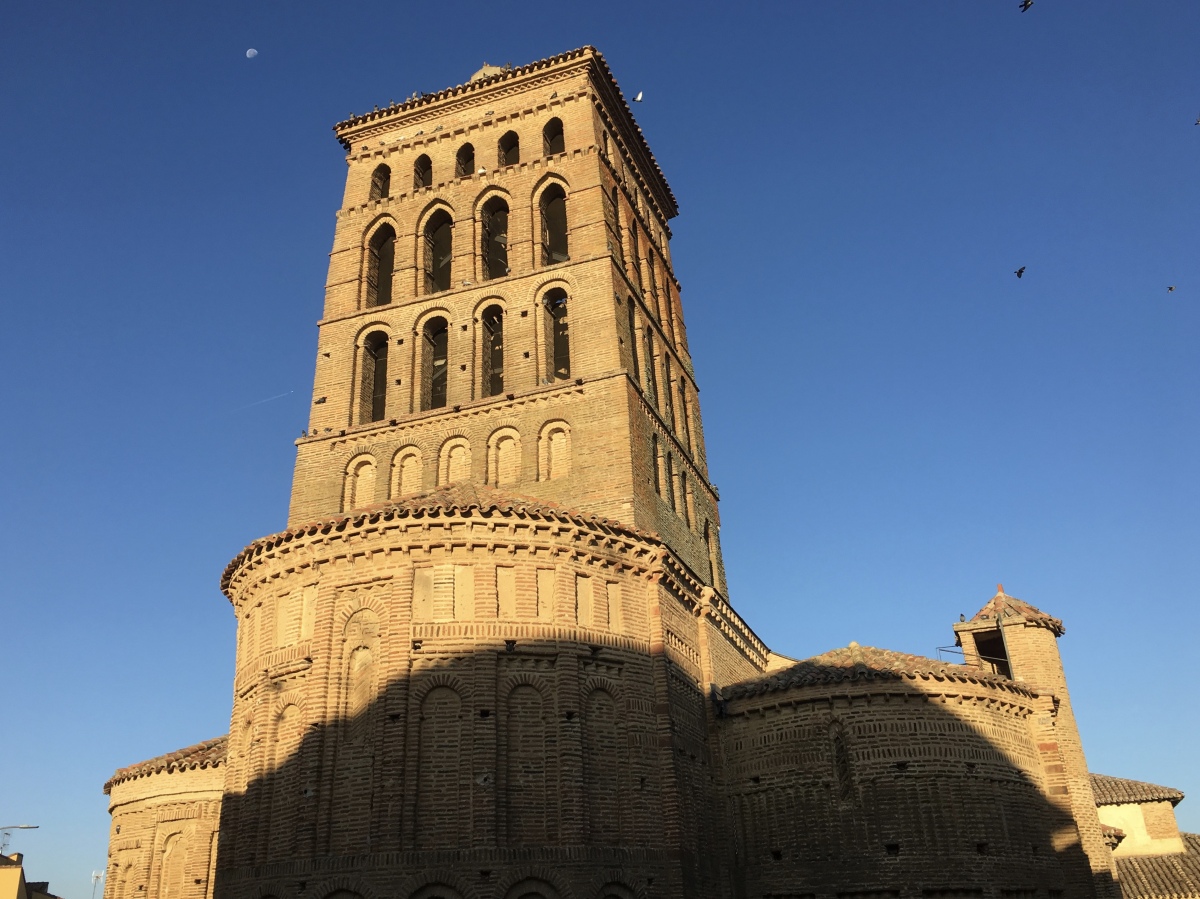 Then I walked to Plaza Mayor for my second breakfast – potato tortilla and fresh orange juice – and I ran into Simon and Karen who were just getting up and going. They had been out late with Bud and Adele, and Kate from London, drinking lots of wine.  They told me Kate was planning to take a rest day in Sahagún. I was surprised to hear they planned to walk 30km today despite their late start and their hung-over states.

They told me to go to Iglesia Señora la Peregrina to get my halfway Compostela! I thought I’d already passed the halfway mark yesterday in Terradillos de los Templarios, so I was confused.

After leaving them, I wandered uphill toward the church, stopping to admire the 12th-century Iglesia San Tirso (Saint Thyrsus), ruins in the Mudejar style.  Adjoining were the ruins of Monasterio San Benito, one of the most powerful monasteries in Spain, which eventually led to its downfall. It originally dated from the 12th century.  The Arco San Benito, now sitting alone on a trafficked avenue, was once the south entrance to the church of the monastery. 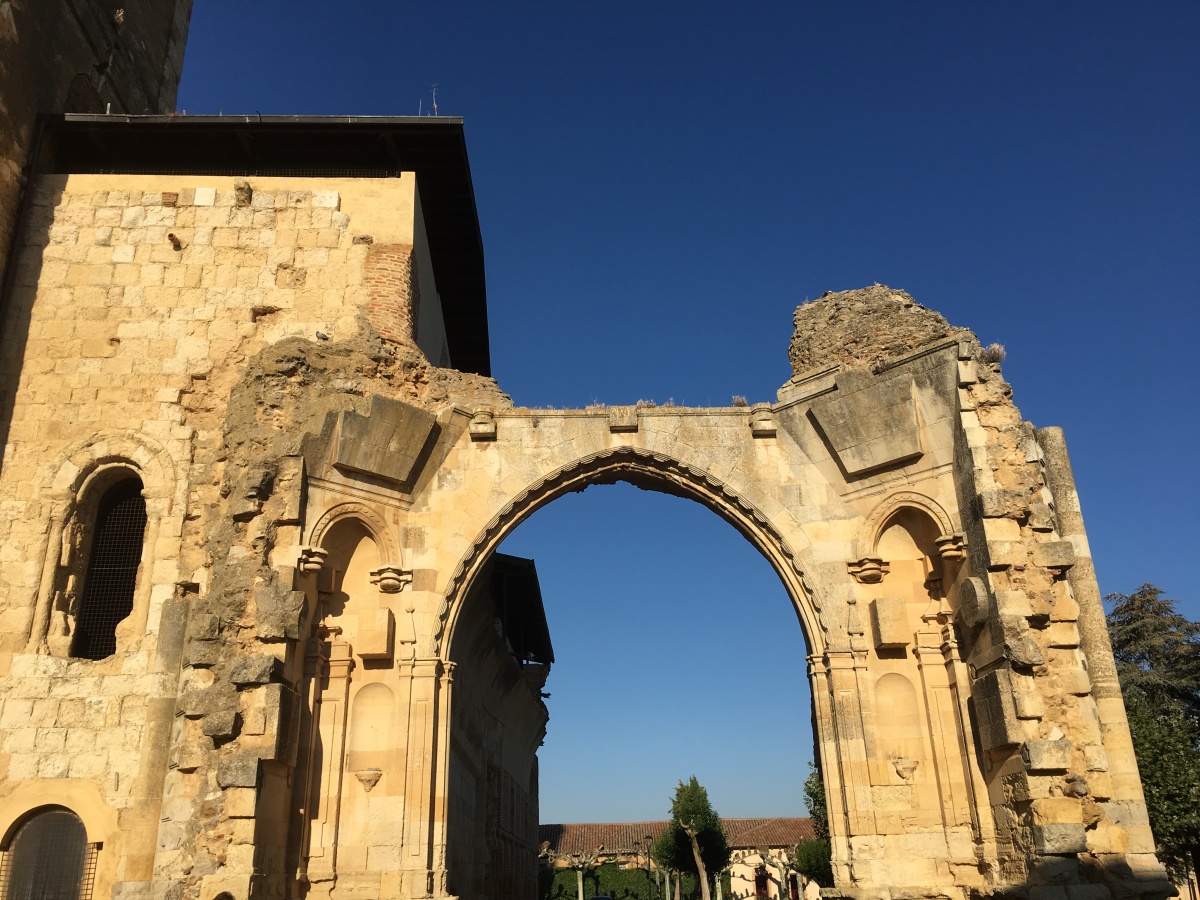 I made my way uphill to the 15th-century Iglesia Señora la Peregrina, formerly a Franciscan convent. The office didn’t open until 10:30, so I had to wait a half hour. After giving the woman there my pilgrim credenciale, I wandered around the church and the museum, with its paintings of inspirational women and bullfighters.  Then I picked up my halfway Compostela, which would probably get rumpled in my backpack. 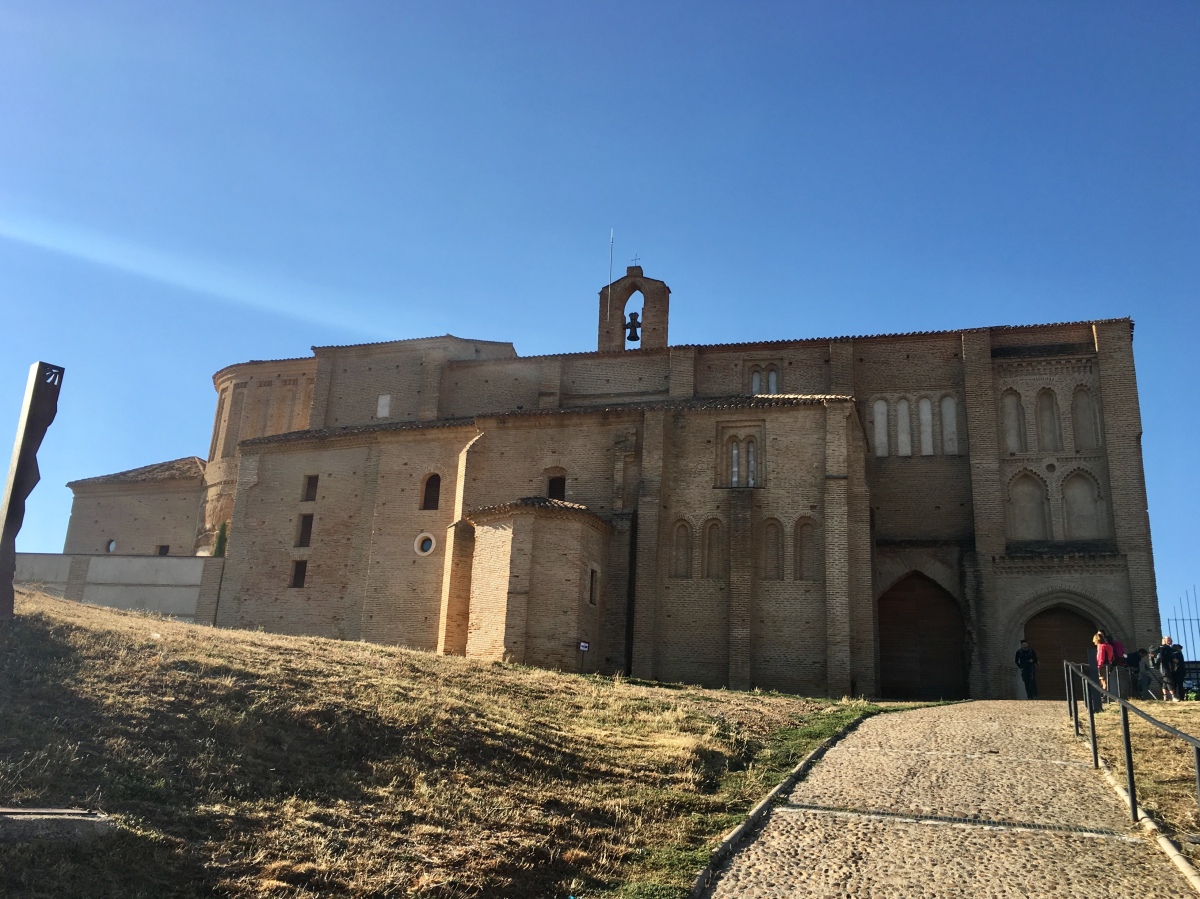 the halfway point of the Spanish Camino 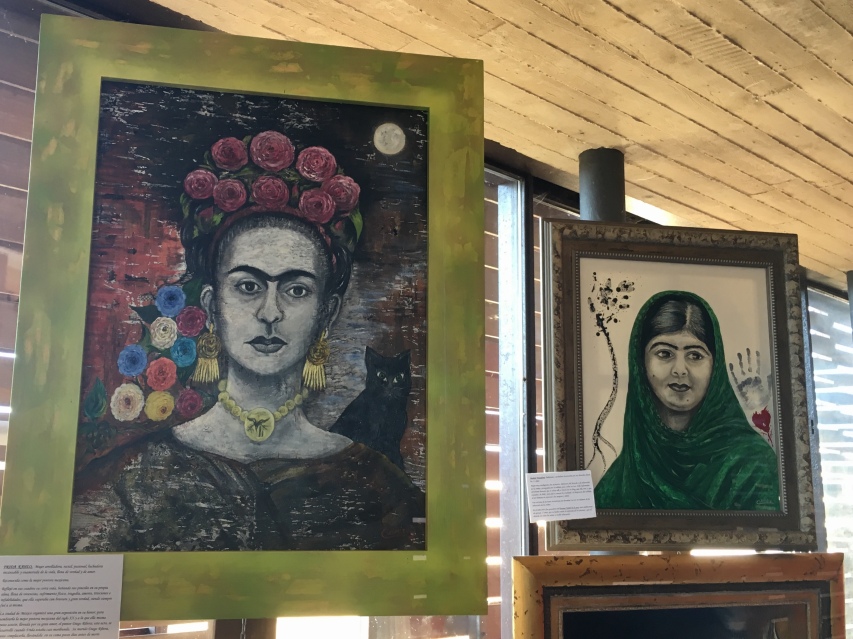 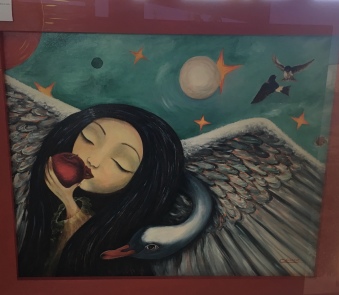 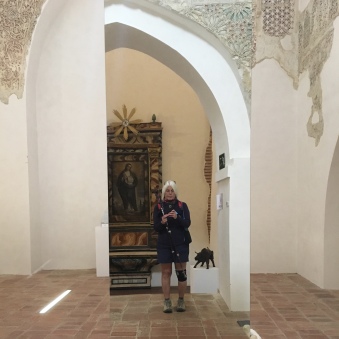 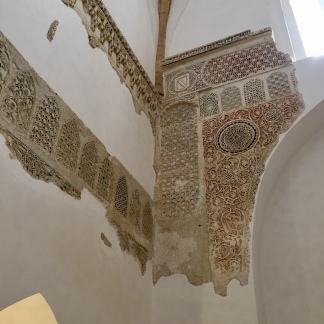 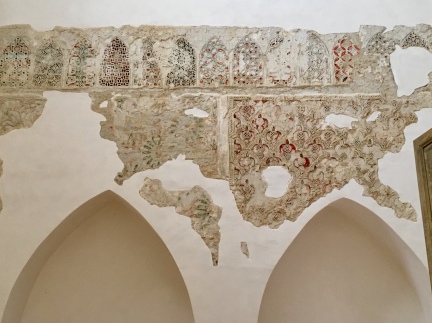 bullfighting paintings at the museum of Iglesia Señora la Peregrina

bullfighting paintings at the museum of Iglesia Señora la Peregrina

I left the church and headed to the historic five-arched stone bridge, Puente Canto, over the río Cea.  It was originally Roman but was reconstructed in the 11th and 16th centuries. 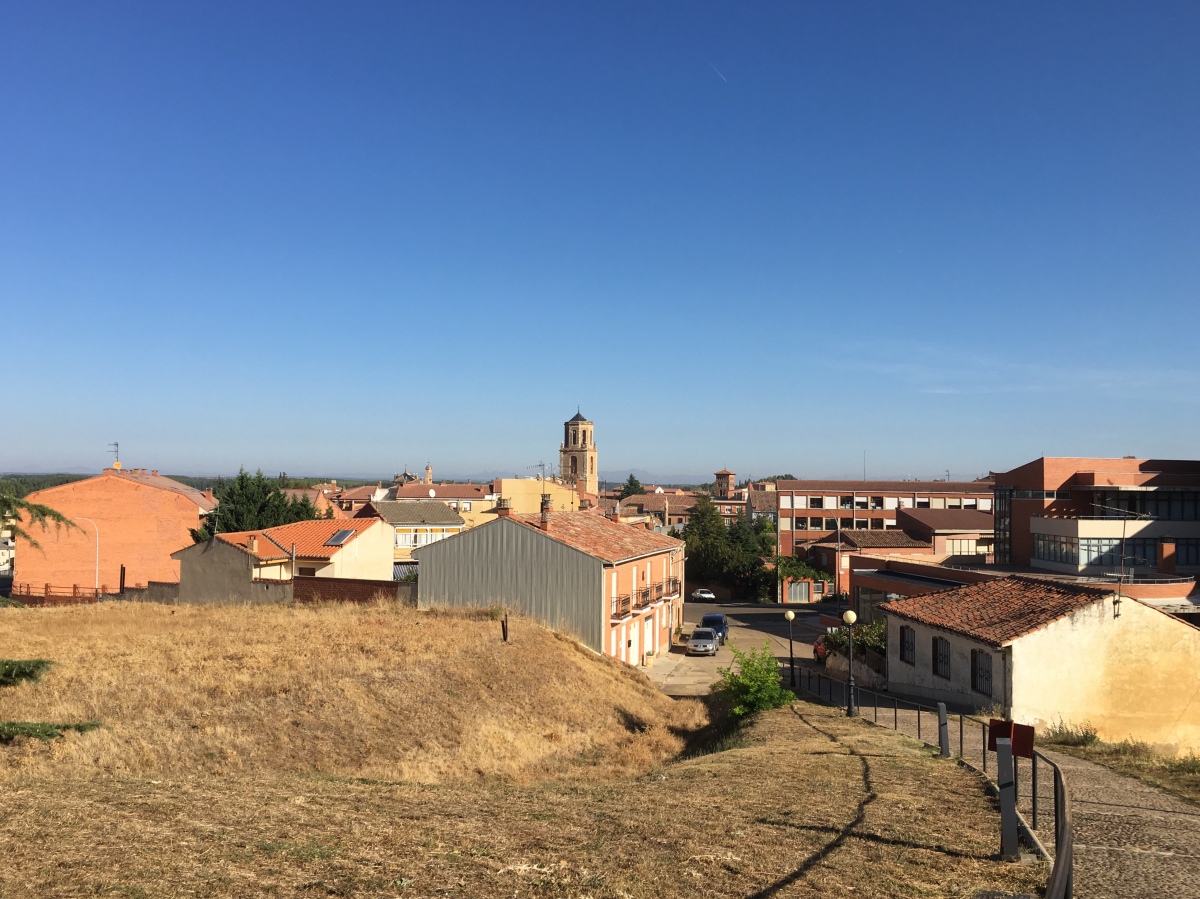 view of Sahagún from the Iglesia Señora La Peregrina

The walk from Sahagún was a path along the road the entire way.  Though some parts were hot, others were mercifully shaded.  A field of sunflowers seemed more vibrant than others I’d seen.  The path had a certain sameness to it: flat, alongside a barely-trafficked road, lined on one side by evenly spaced trees that gave little shade. This kind of path was easy enough but rather repetitive and boring. It was especially hard at the end of the day, when it was hot.  I had a bad feeling the next day would be more of the same.

Many people say they hate the Meseta.  I could say I both loved and was bored by it. Hate was certainly too strong a word. The worst were the roadside paths; the ones in the wild were much more enjoyable.

In a couple of days, I’d be done with the Meseta and back to climbing mountains.  Who was to say which I’d like best when all was said and done.

When I first walked into the town of Bercianos del Real Camino, with its population of 200, the small church at the entrance to the village was packed.  The congregation was singing and the priest was dressed in street clothes.

The town of Bercianos del Real Camino was one of the worst, and least charming, I’ve stayed in. I walked around in circles looking for the poorly signposted albergue.  Though the Albergue Santa Clara was nice, with a little courtyard with umbrellas and lots of plants, there wasn’t much offered in the way of food and the owners weren’t welcoming. There were a lot of Spanish locals there in the early afternoon, dressed in their Sunday best, talking and laughing in that way that Spanish families do.

In the courtyard, I spoke with a Danish couple who told me the halfway mark in Sahagún is for those Spanish pilgrims who started their Camino in Pamplona.  That explained my confusion.

In the courtyard, a Korean woman was furiously doing a ton of laundry by hand while her husband sat at a table drinking a beer, smoking, and looking at his phone, as if he didn’t have a care in the world. She seemed to be washing her laundry and his laundry and some sheets and even sleeping bags.  The water from the faucet was blasting into the washtub. The owner of the albergue yelled at her: “Agua! Agua!” – running too much water. It reminded me of my father yelling at me when I washed dishes as a kid; he’d get so angry if we left the water running the whole time.  The Korean woman was very embarrassed and apologetic; sometimes Koreans seemed so meek!

I walked to Hostel Rivero for some small eggrolls and lemon beer.

After posting on Instagram, I sat at a table in the albergue courtyard and booked my accommodations ahead for the next day and for many future days.  That took some time.

Later, I went back to Hostel Rivero and had a glass of red wine and a pilgrim meal of a lentil salad, meatballs with tomato, and French fries.  I hardly talked to a soul all day except for the brief conversation with Simon and Karen and the Danish couple. Other than that, it was quite a boring day.

In the wee morning hour, around 4:45 a.m. the Korean husband of the laundry woman shook me violently and woke me up: “Snoring!!” he said angrily.  The next thing I knew, he and his wife were gone  I wondered why he bothered to wake me up if they were leaving anyway?

I wish I’d had the wherewithal to snap back at him when he woke me up: “At least I don’t sit there smoking a cigarette and looking at my phone while my spouse slaves away doing all my laundry!”

You can find everything I’ve written so far on the Camino de Santiago here:

This post is in response to Jo’s Monday Walk: Sete Cidades. I know Jo is out of town for a while, but I figured I’d link anyway. 🙂