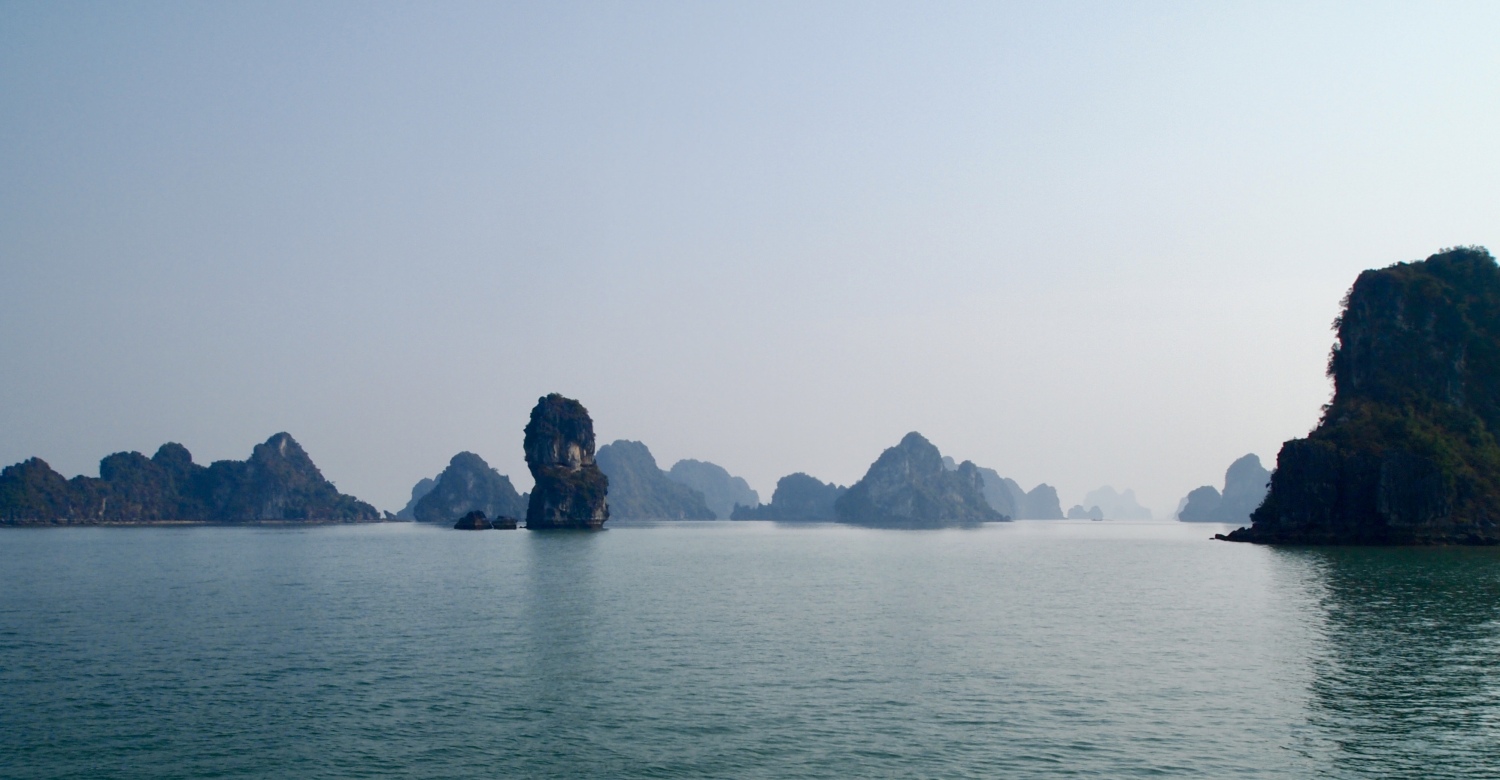 In January of 2011, I had been living and teaching English in South Korea for almost a year and had been trying to explore as much of Asia as I could.  I felt the urge to travel during my winter break to Vietnam and Cambodia.  In Vietnam, I’d throw myself into the craziness of Hanoi and sail on a placid junk through the mystical karsts of Halong Bay. 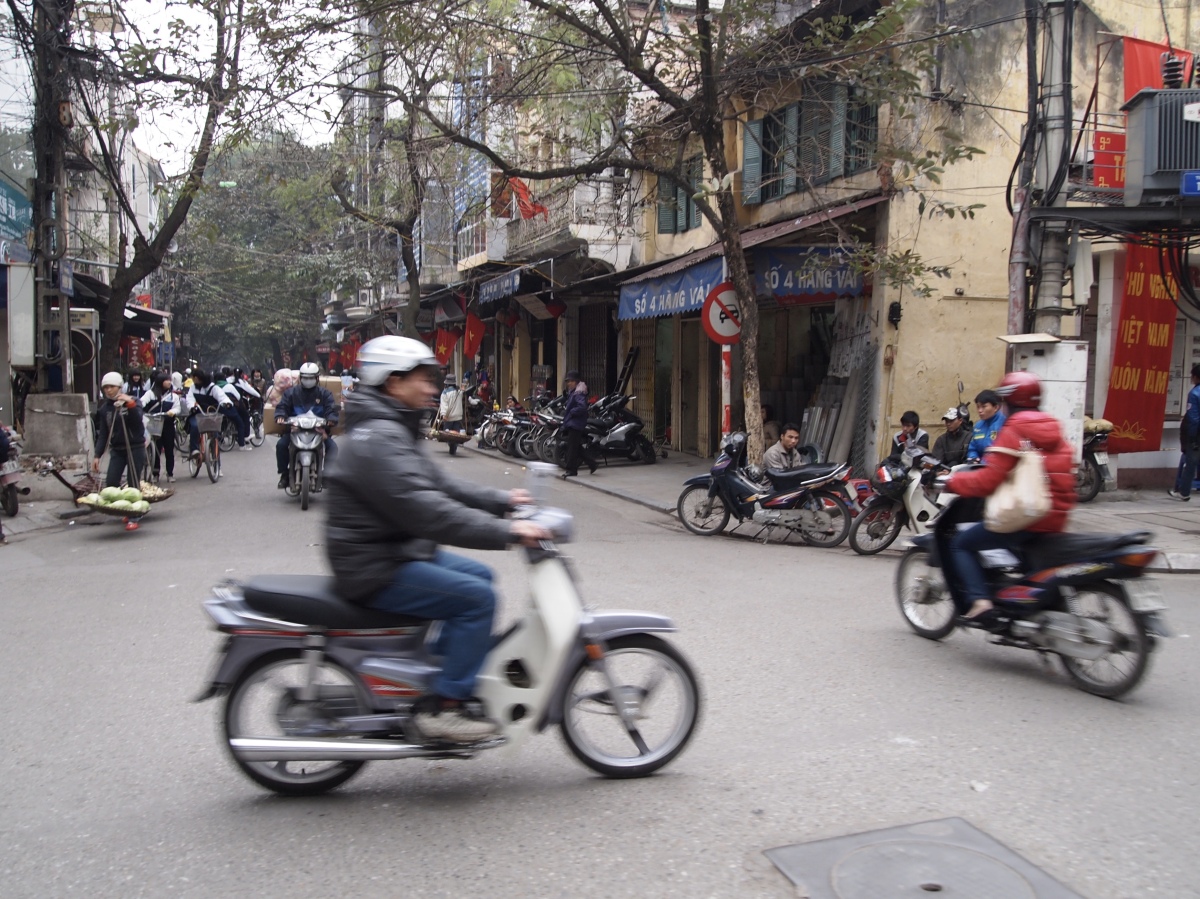 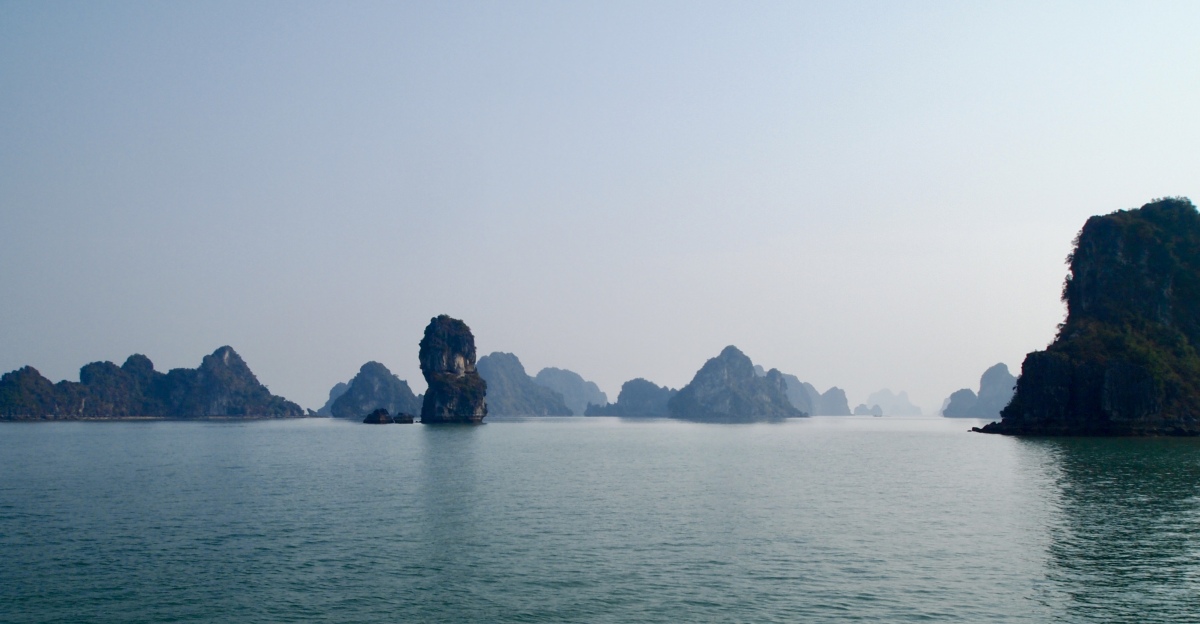 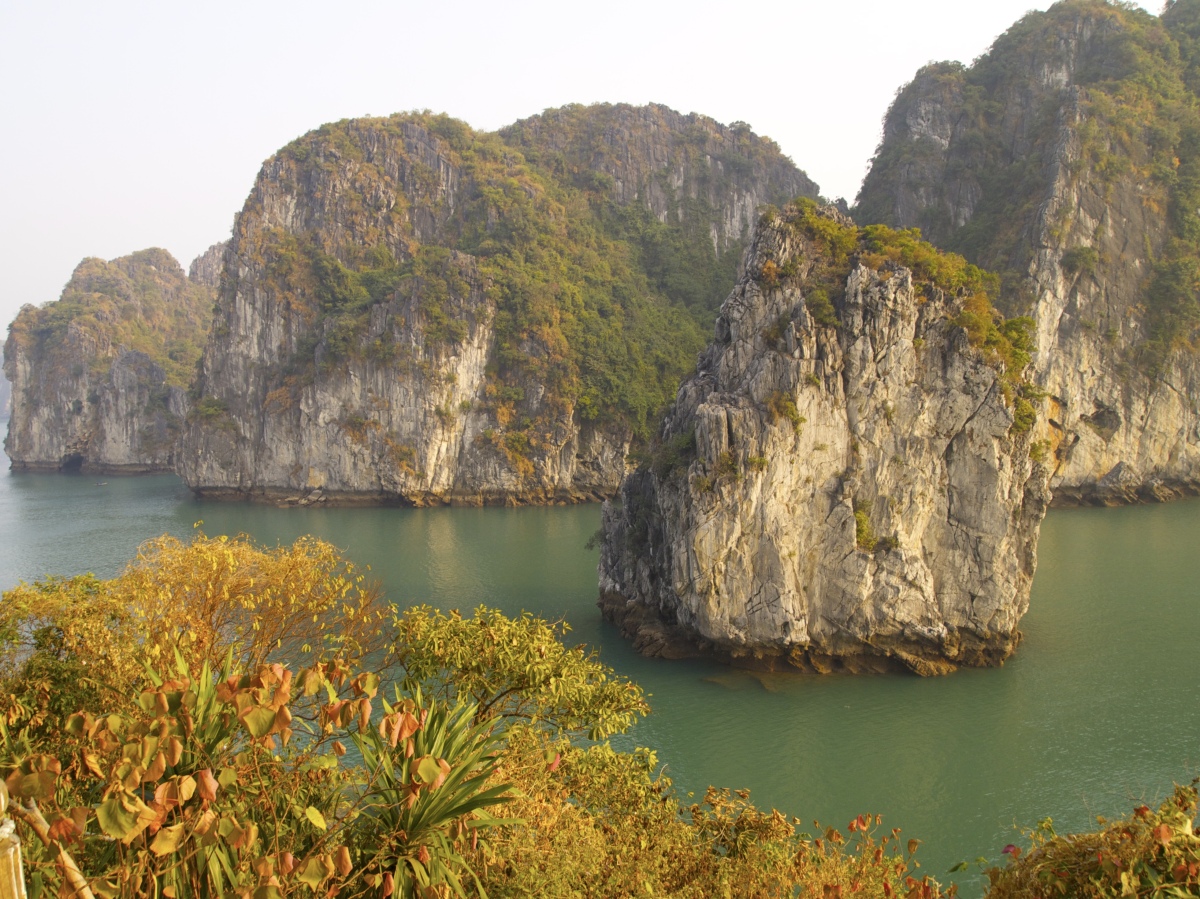 I was excited, as always, to travel to an exotic land.  But, I also felt trepidation about this trip, mainly because of my lifetime exposure to the horrors of the Vietnam War and the extensive reading I’d been doing to prepare. I was a child of the Vietnam War-era, but I was in the generation too late, thank goodness, to actually go to war. I was too young to understand everything that was going on at the time, but I remember the horrifying images of the war brought into our living room nightly on T.V.: A Viet Cong suspect being shot point blank in the head, the terrified naked “Napalm girl,” a Buddhist monk setting himself on fire, and many others.  The Vietnam War was the first U.S. military conflict to be televised. We had never before been able to watch, from the comfort of our homes, scenes of a faraway war unfold in moving pictures.

The world seemed a crazy and scary place in those years of my youth.

This June of 2019, I saw an exhibit, Artists Respond: American Art and the Vietnam War (1965-1975), at the Smithsonian American Art Museum (SAAM).  The following photos by Martha Rosler from the series House Beautiful: Bringing the War Home, juxtapose the feminine realm of domestic life with the masculine business of waging war. The artist combined documentary and advertising images cut from popular magazines like Life and Ladies’ Home Journal to show figures from the war front, like soldiers or refugees, moving unexpectedly through affluent American homes. The photomontages aim to show how we are all interconnected, and they are reminders of how the war was brought into our U.S. homes, far from the violence our country was inflicting on Vietnam. The artist collapses the distance between “here” and “there,” essentially “bringing the war home.” 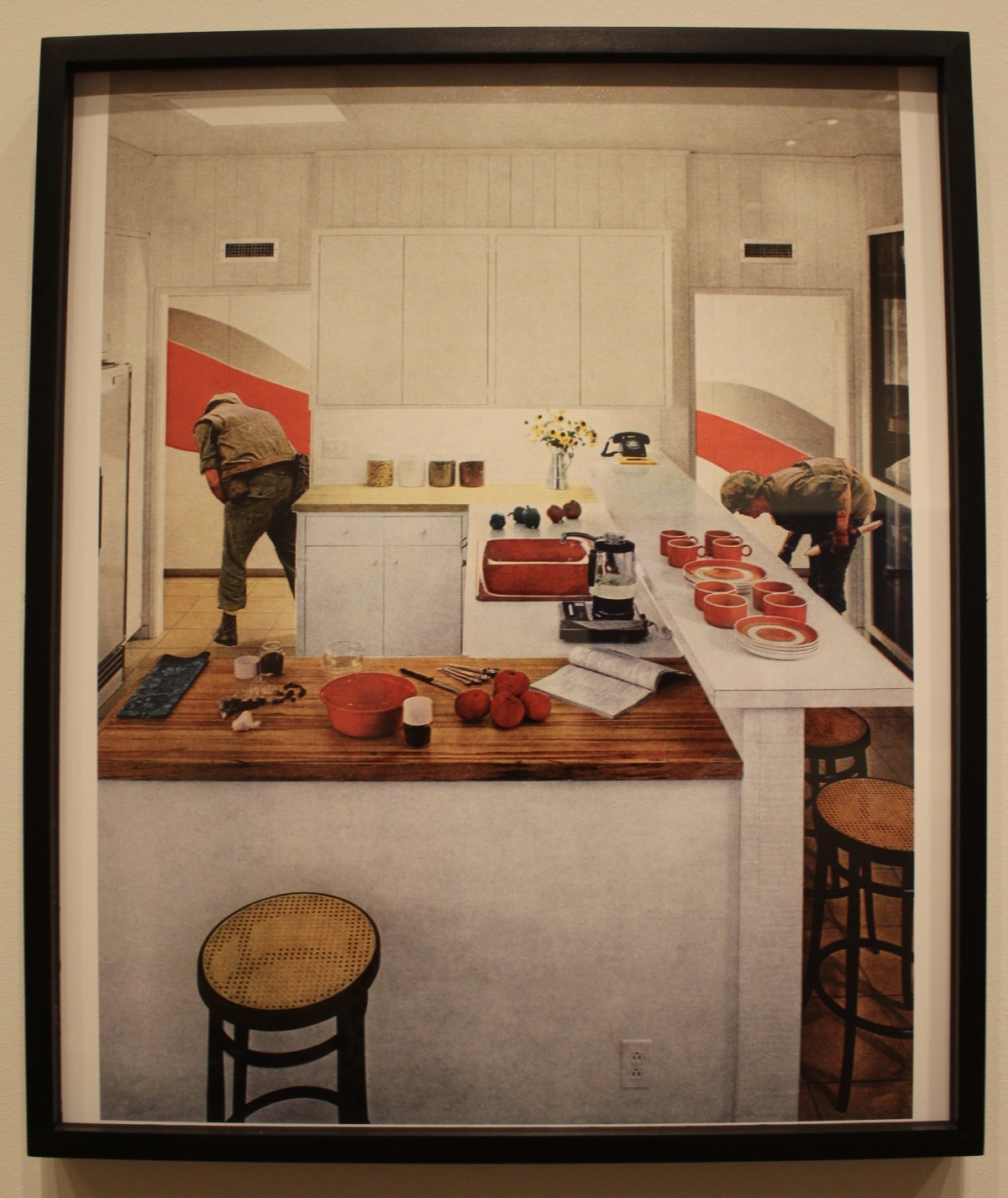 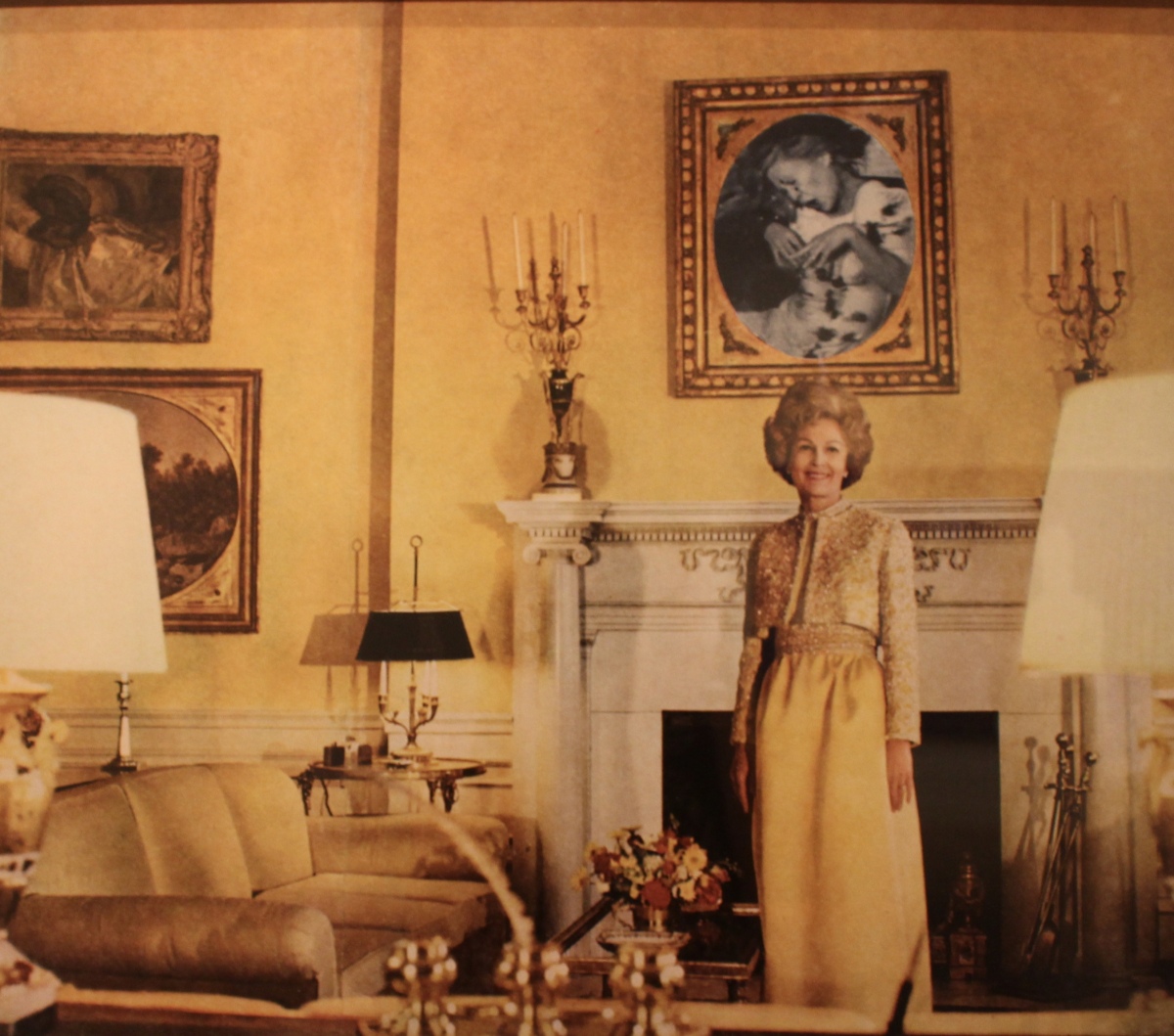 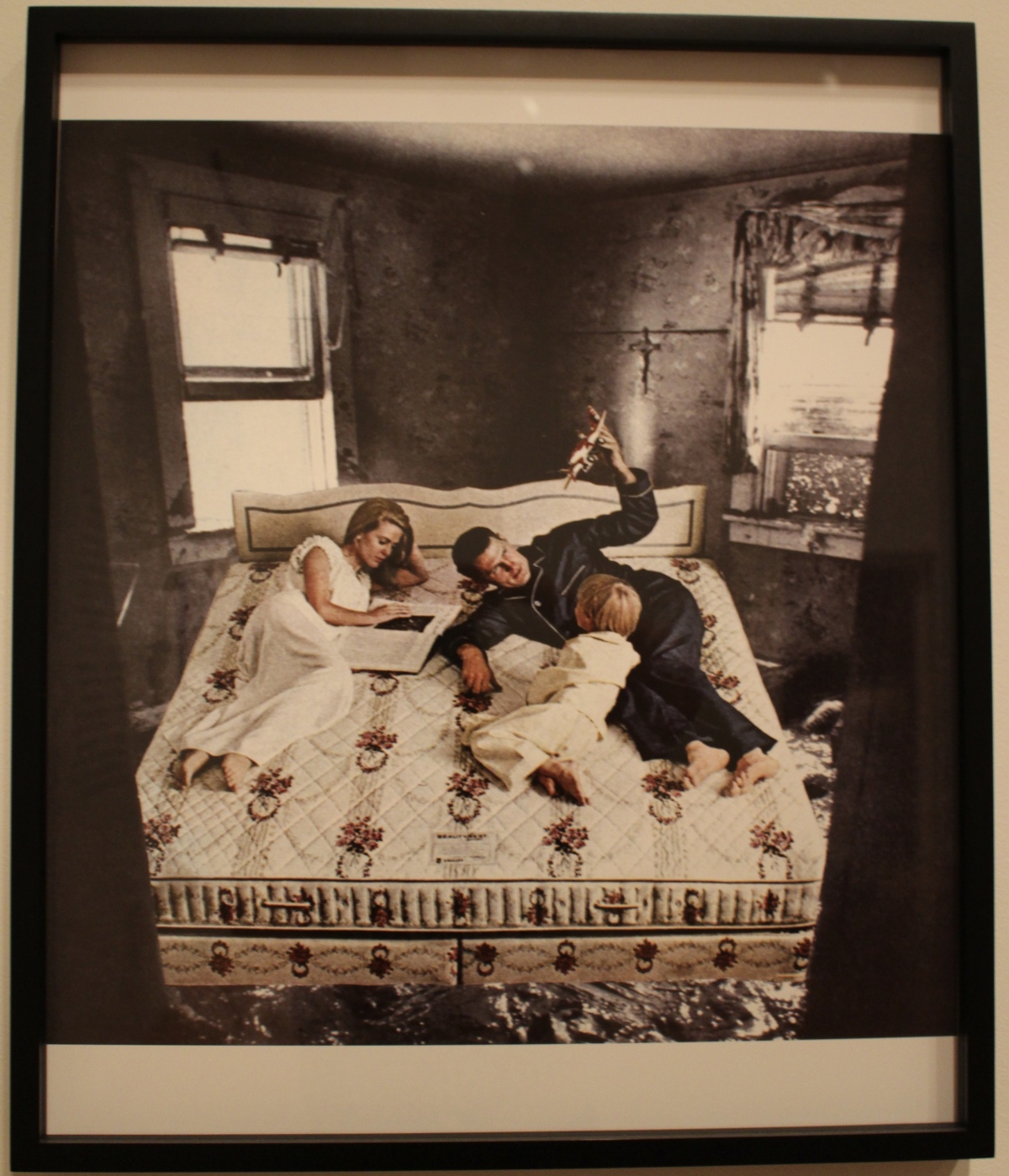 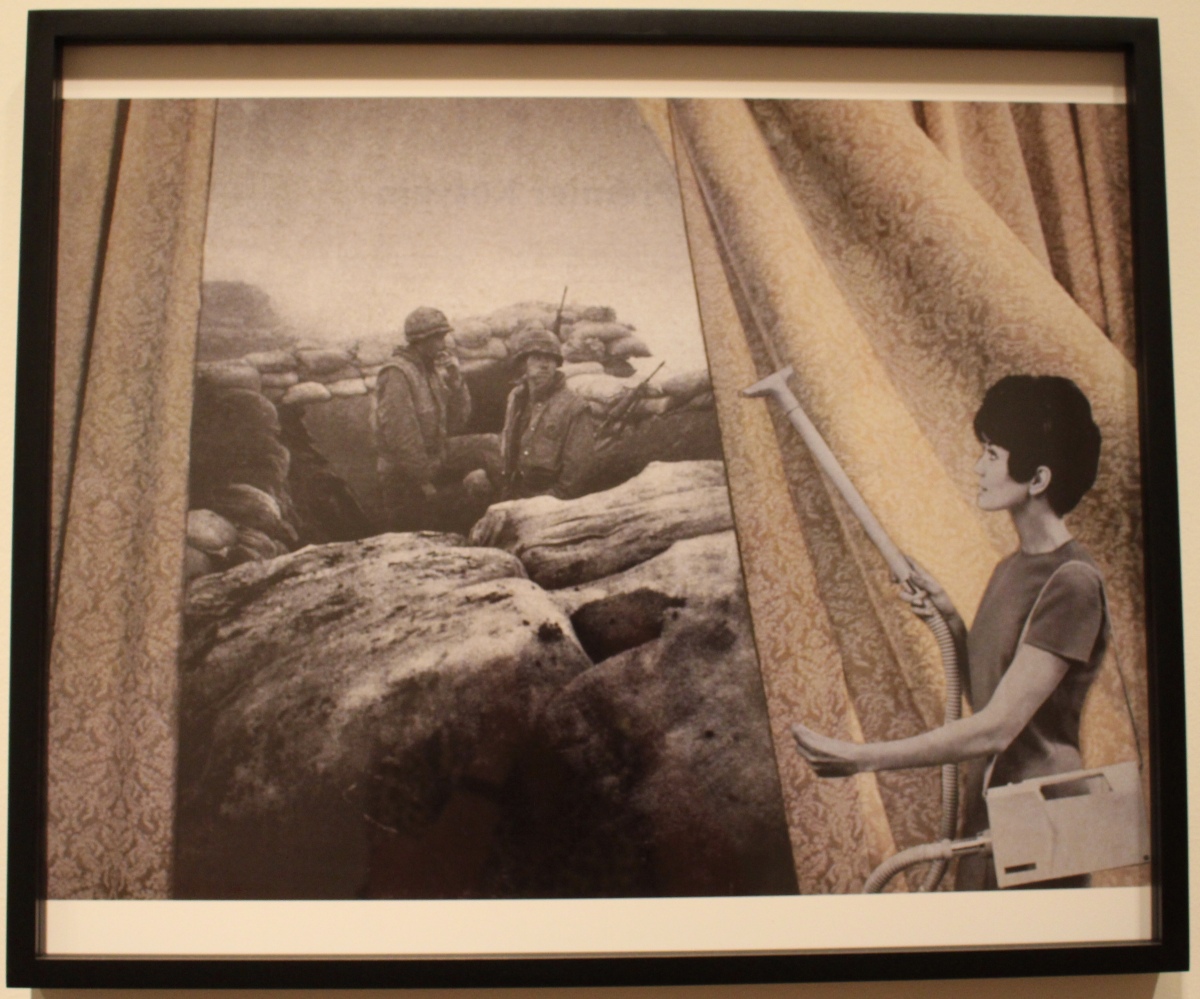 Cleaning the Drapes by Martha Rosler

From my home, I also watched news coverage of student protests on college campuses all over America and was infuriated by the Kent State massacre and by the way war protestors were vilified.  My father was a die-hard Republican who hated war protestors, and I grew up having to listen to his tirades. I didn’t know at that time who was right, but since then, I have learned much about the Vietnam War and what a disaster it was for our country and for the Vietnamese people.  And I have formed solid opinions about people’s rights to protest horrible things that governments do.

Here is a poem I wrote about a famous photograph (see photo here) taken in the aftermath of the Kent State shootings:

I wrote this poem in reaction to the photograph, as if I were a college student at Kent State.  I was too young to be in college during the Kent State massacre, but I wasn’t too young to be furious over, and disgusted by, my father’s and others’ anti-protester rants.

One prominent protester of the war was Muhammad Ali.  I remember my father’s diatribes about him too, because Ali objected to the draft and refused to fight in Vietnam. By taking a stand against the war, he put himself into the crossfire of public opinion. Earlier this year, I visited the Muhammad Ali Center in Louisville, Kentucky, where I learned of his opposition to the war. 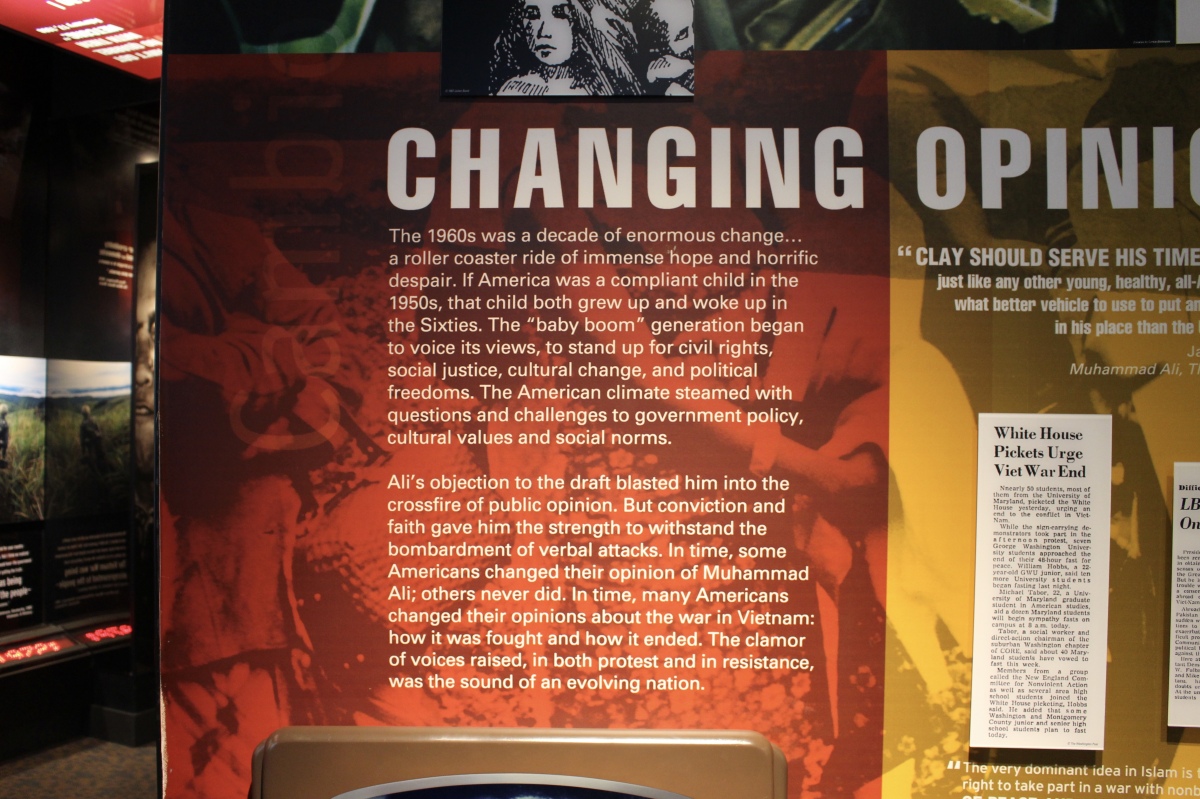 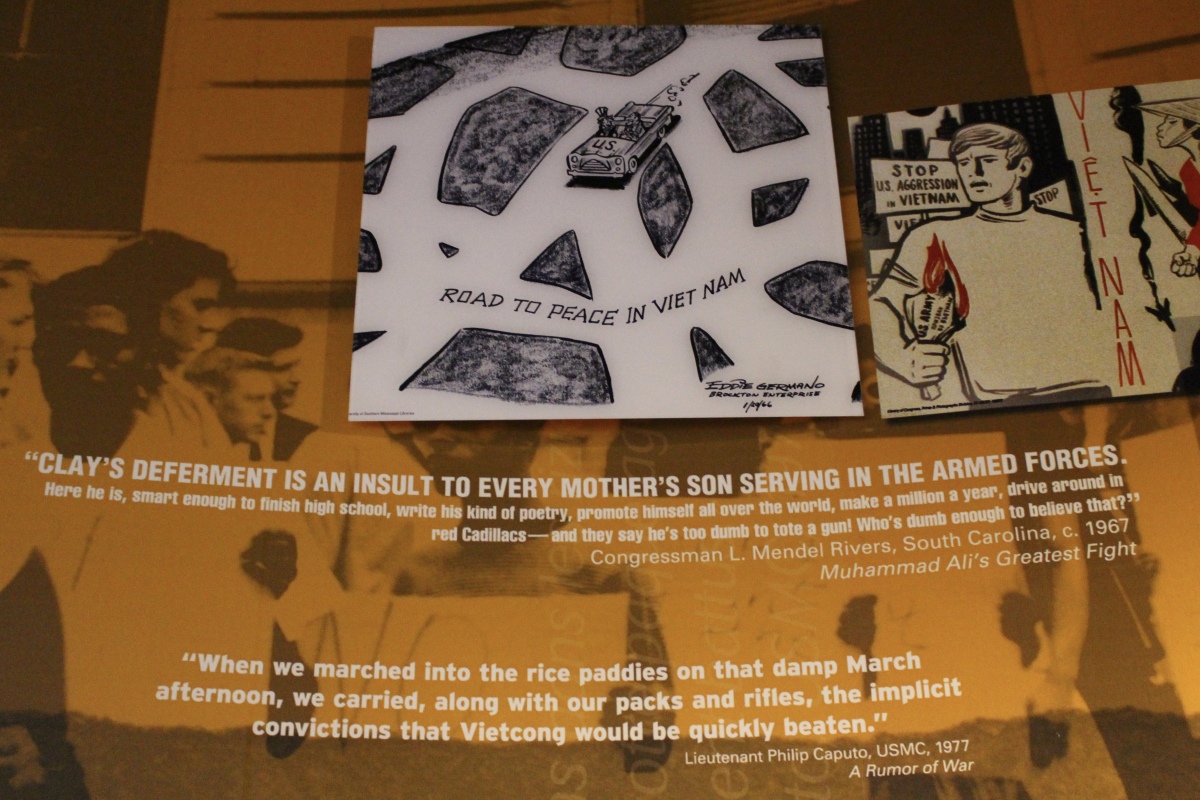 more about the war 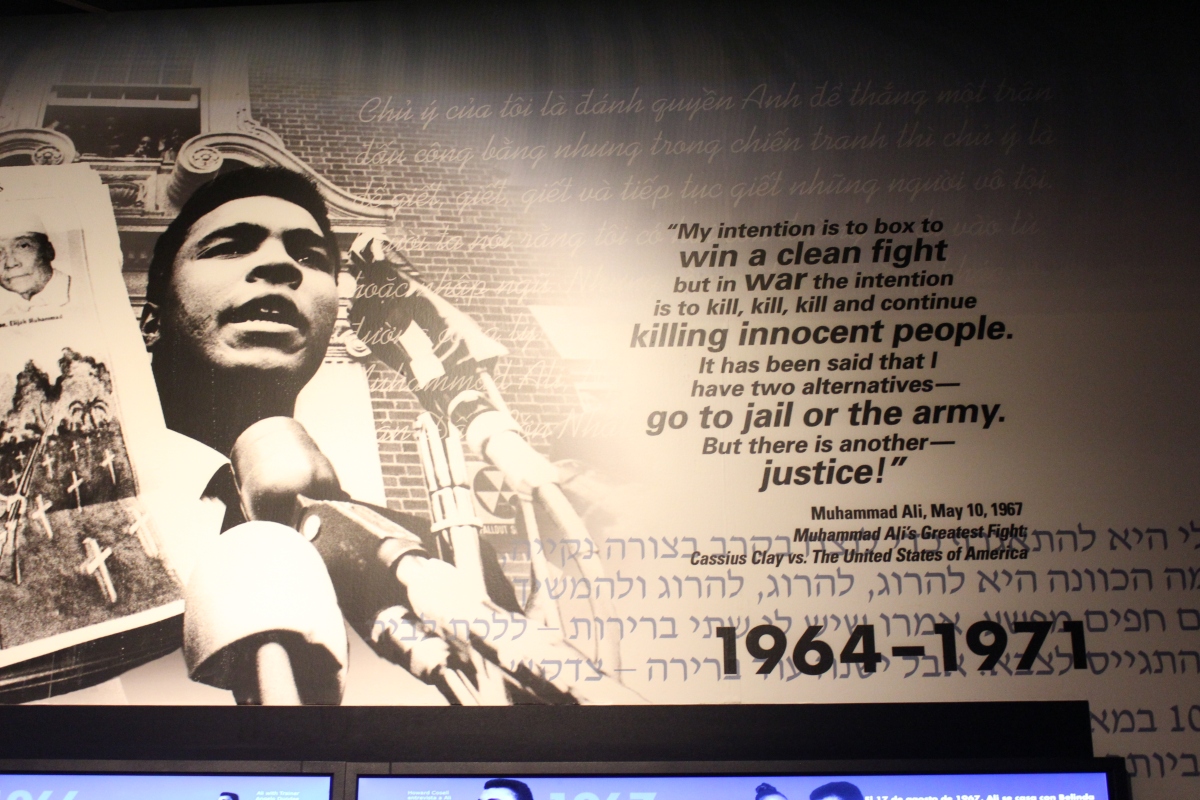 In later years, in one of my writing classes, I read a great short story by Tim O’Brien, “The Things They Carried.” It told about the things American soldiers in the Vietnam war carried with them and the meanings behind these things; in essence, these items told the greater stories of the soldiers’ lives and the horrendous war they were part of.

In another part of the recent SAAM exhibit, I saw how American artists made statements about the immorality of the war.  Dennis Oppenheim’s photograph, “Reading Position for Second Degree Burn,” shows two photographs of the artist lying on the beach for five hours with a volume of military field tactics on his bare chest.  He was trying to register a sense of what many human bodies in 1970 had to endure: His weaponizing of the sun, in particular, conjured media reports of American soldiers baking in the Vietnamese heat and Vietnamese citizens being burned, far more gruesomely, by napalm weapons (from a plaque at the museum). 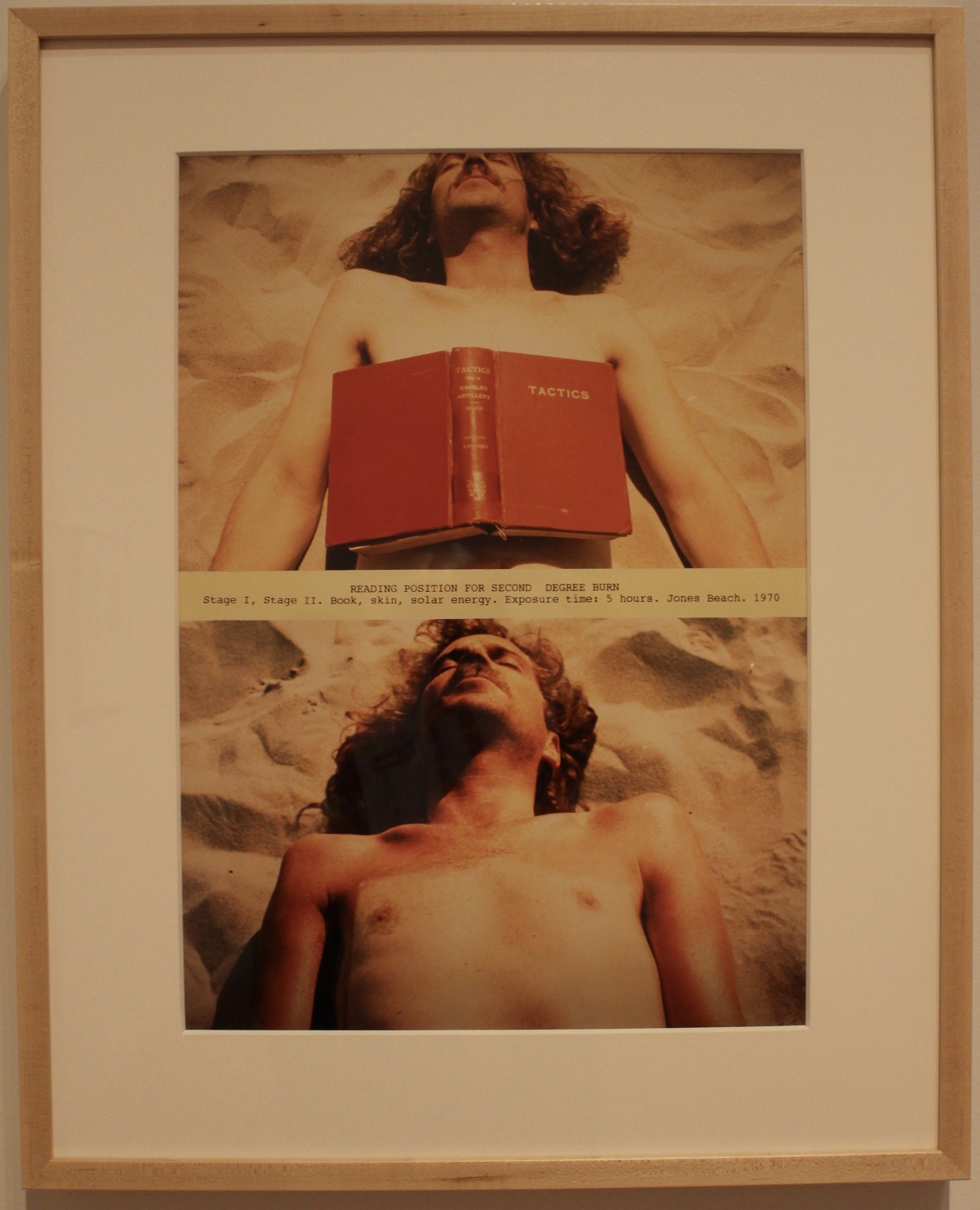 In the Non-War Memorial, artist Edward Kienholz, “imagined thousands of army uniforms – the same number as American soldiers killed in the war – filled with clay and placed in a chemically destroyed meadow in northern Idaho. Given that mechanical and chemical deforestation were deliberate U.S. military strategies in Vietnam, Kienholz’s unrealized plan to plow under and poison a pristine field sought to bring the war home to the American West” (from a plaque at the museum). 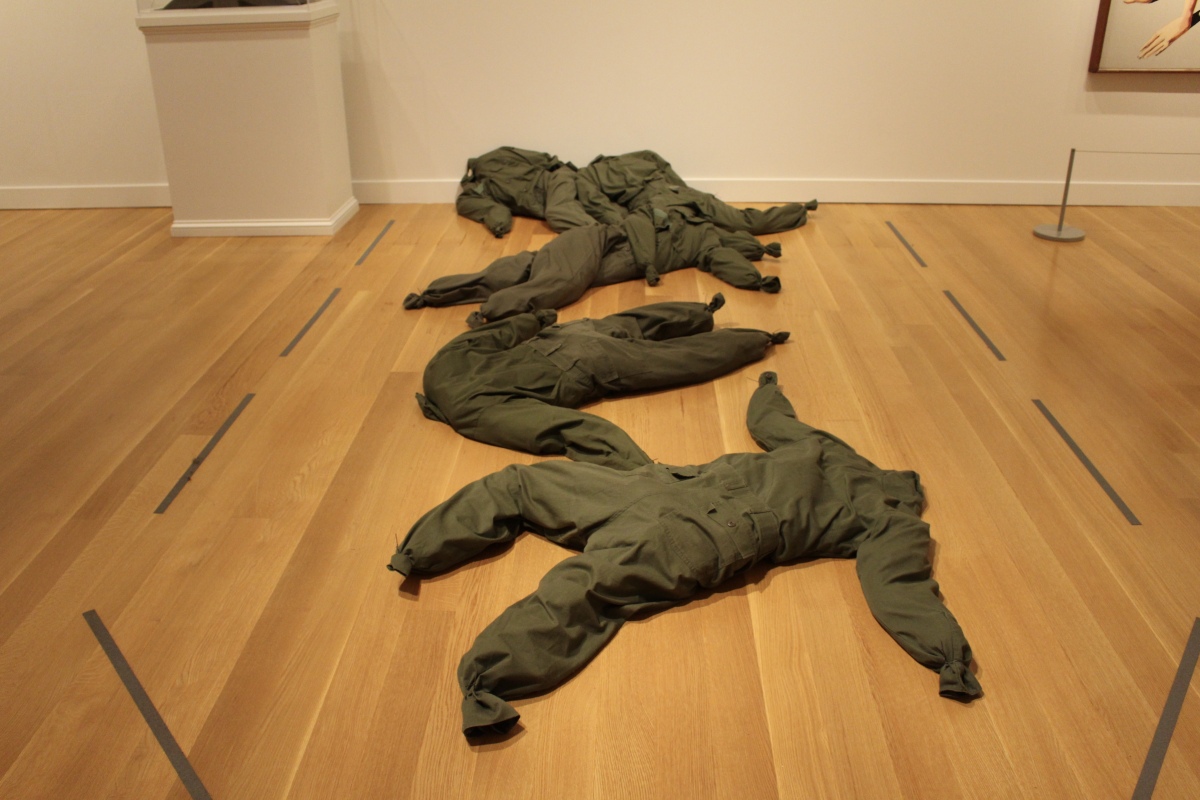 Also in the SAAM exhibit, Liliana Porter appropriated a photo taken by photojournalist John Schneider of a woman detained by U.S. and South Vietnamese forces on suspicion of Communist affiliation. Her words go from “northvietnamese” to “my mother, my sister, you, I,” to guide the viewer to empathy and identification. 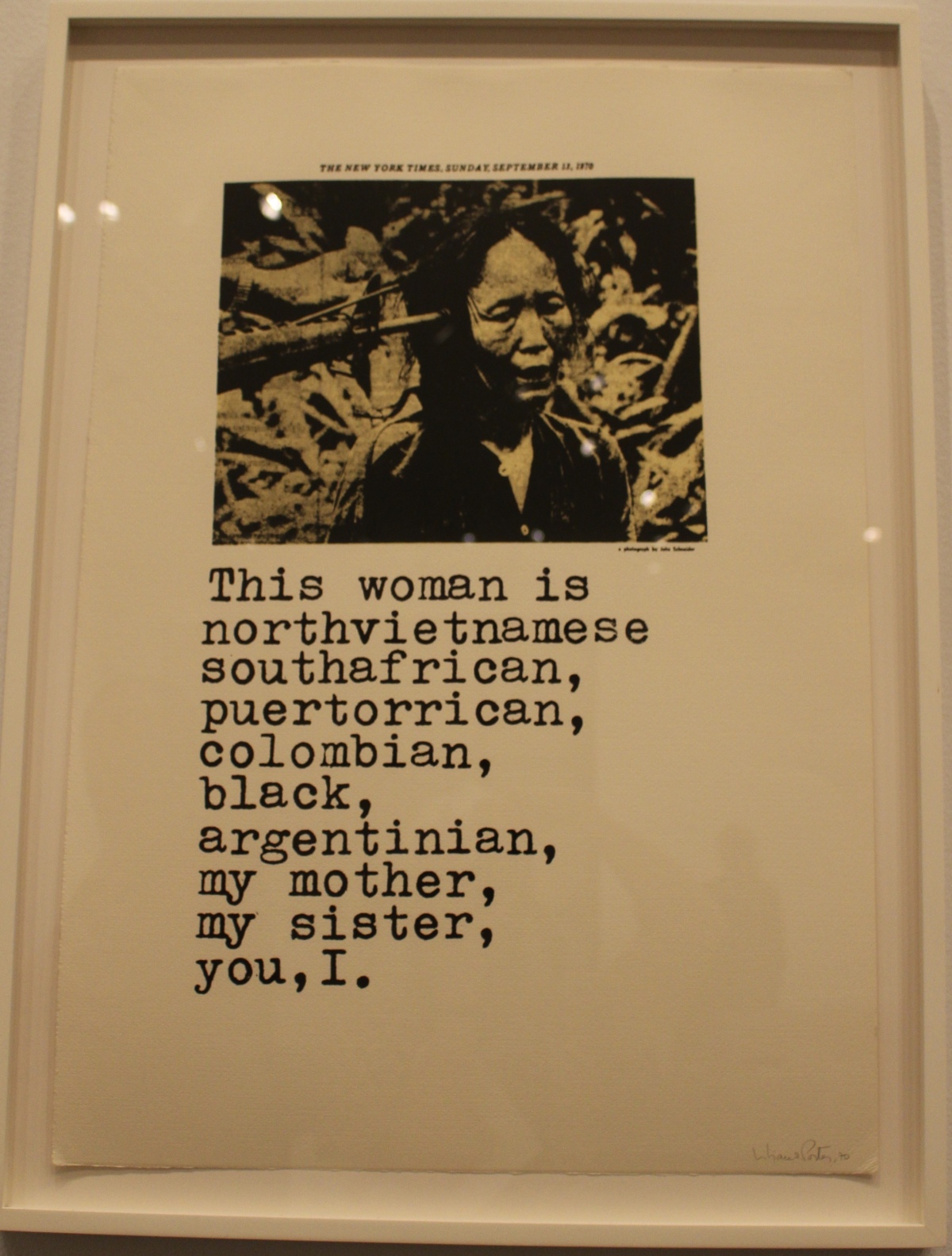 Finally, there were the refugees.  In The Vietnamese Exodus History Learning Project: the exodus, the camps and the half-lived lives, artist Tiffany Chung commissioned a group of young artists from present-day Ho Chi Minh City to make watercolors based on photographs of the refugee crisis in the late 1970s and 1980s.  These images were unknown to the artists painting them, having grown up in a country whose textbooks and public conversations do not acknowledge the crisis.  Through this process, the artists began to recover parts of their own past.

In one scene of an immigrant camp, a little girl holds out an empty food bowl, her hopeful expression unfazed by the rain and the barbed wire surrounding her. 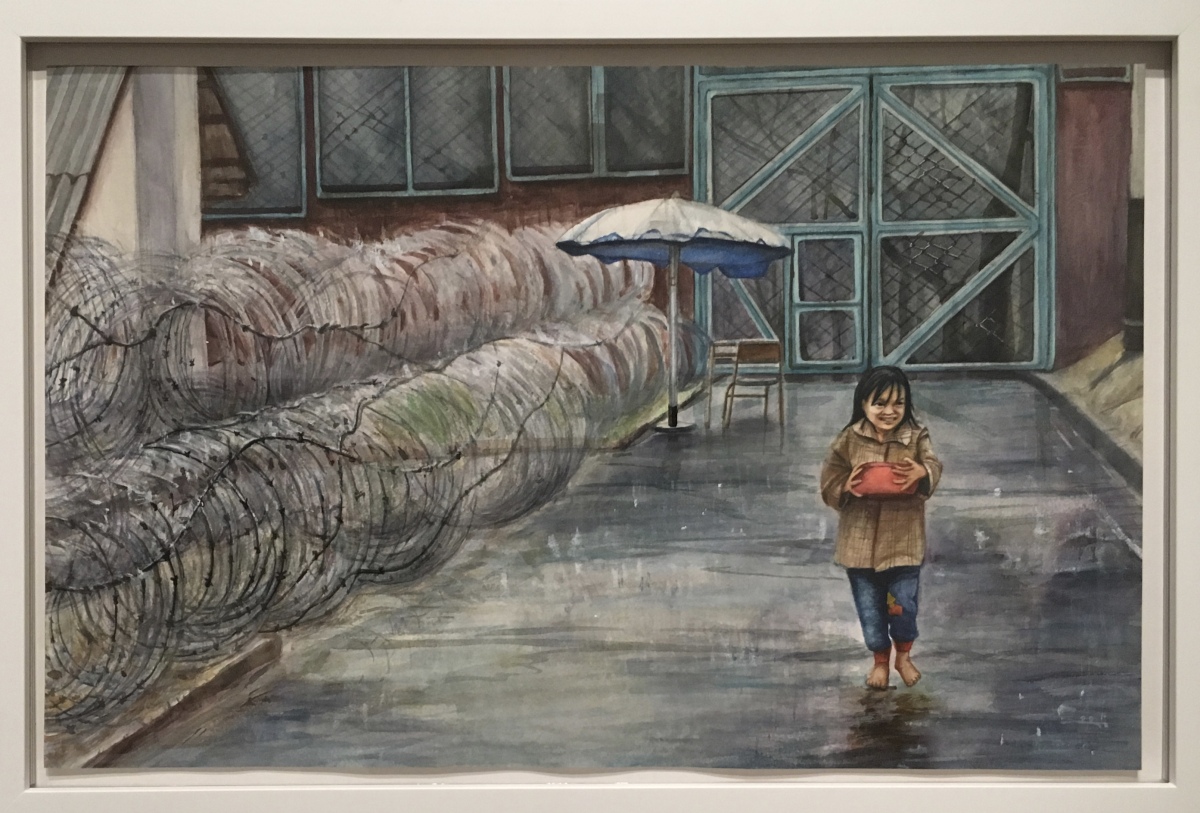 The scene below depicts Hong Kong in 1988, when refugees were no longer admitted; it shows a father clutching a small child as scores of people disembark from a crowded boat. 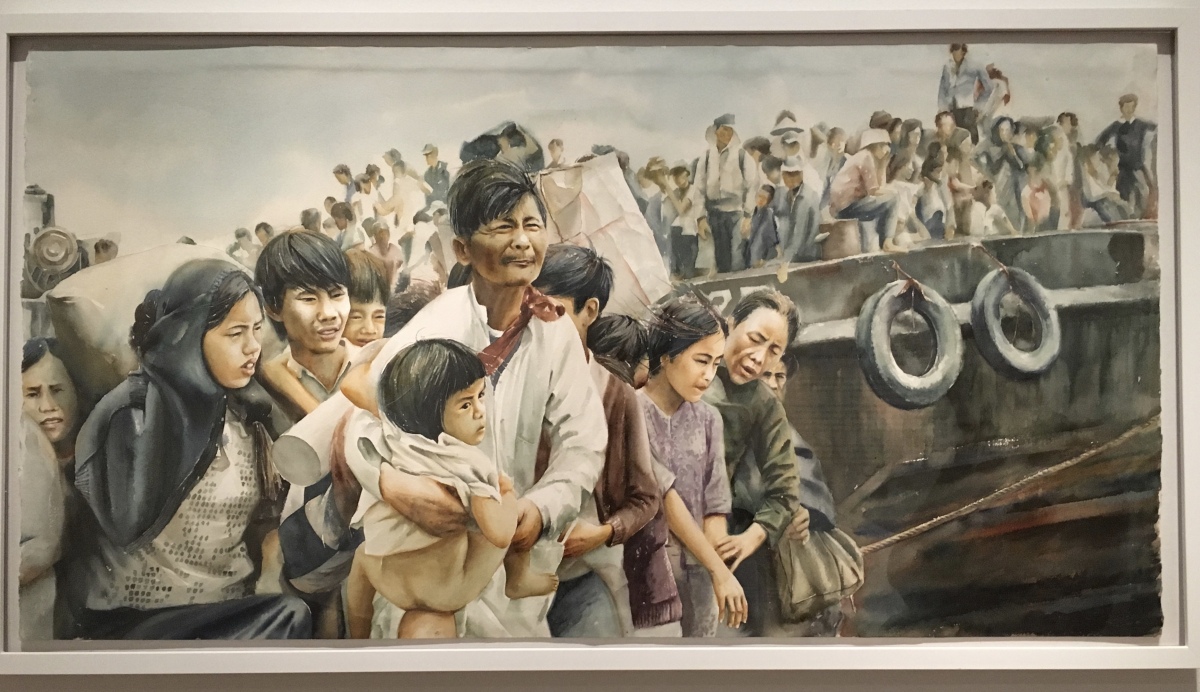 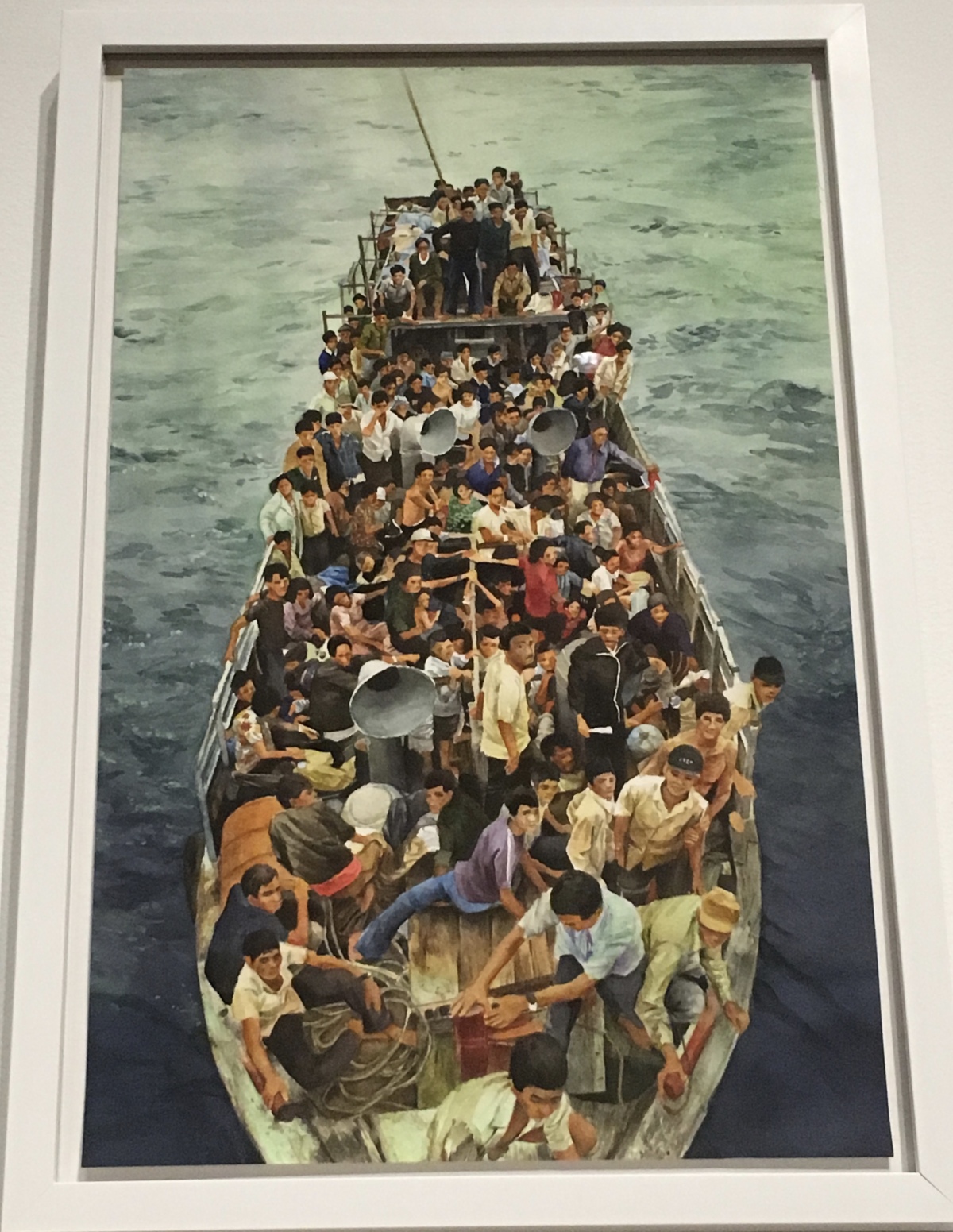 I had seen one movie about Vietnam that evoked a peaceful and slow-paced culture.  The 2000 movie, Vertical Ray of the Sun, was about 3 sisters and their families and their loves.  The movie is full of lush greenery, drenching rains, and romantic scenes.  This movie has colored my imaginings of Vietnam since I saw it in 2001.  Of course, when I was younger, I also saw violent and disturbing Vietnam war movies, such as the 1979 film Apocalypse Now, Platoon, Good Morning, Vietnam, Born on the Fourth of July and others. 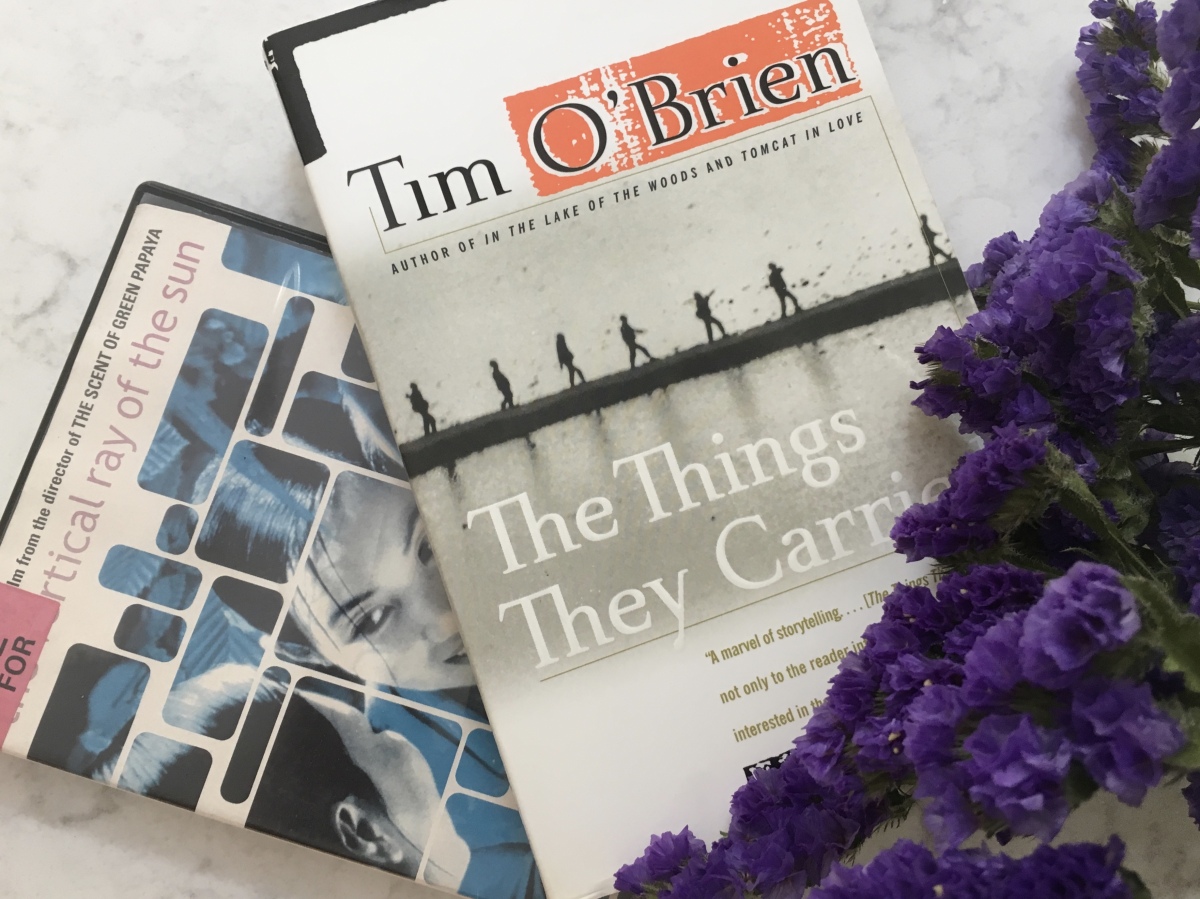 Vertical Ray of the Sun DVD & Tim O’Brien’s The Things They Carried.

Here’s the trailer for Vertical Ray of the Sun.

Here’s a video of Vietnamese music I found on YouTube to inspire future visits.

Though I was only able to go to the north of Vietnam on this trip in 2011, I hope to return sometime to the south.

Include the link in the comments below by Wednesday, August 21 at 1:00 p.m. EST.  My next “call to place” post is scheduled to post on Thursday, August 22.

If you’d like, you can use the hashtag #wanderessence.

This will be an ongoing invitation, on the fourth Thursday of each month. Feel free to jump in at any time.  🙂

Thanks to all of you who wrote posts about “the call to place.” 🙂