On September 14, 1999, my husband and I embarked on our first ever trip to England. This trip was a milestone for me, having never been across the pond to Europe; I had only taken extensive road trips around the USA and Canada, and had been several times to the Bahamas in the Caribbean. It was late in life for me to be traveling abroad for the first time; I was 43 and Mike was 45.  We left behind our children, ages 15, 8 and 6, with their grandparents for the first time.

I remember being afraid to venture to a non-English speaking country, so we chose England to be safe. When I look back on it now, I realize how unadventurous I was in every respect.  I was afraid of flying, afraid to explore unfamiliar cultures, afraid to leave the kids behind.  I wouldn’t even consider traveling until we had wills drawn up in case we should die. I was so cautious then.

I thought England would be much like America, so I was thrilled to find it was surprisingly different. It felt foreign, even exotic! I realized I could travel abroad, and the journey transformed me into a braver and less anxious traveler.  I began almost as soon as I returned home to plan our next trip to France in 2003.

In Bath, we walked around the Roman Baths, at one time the most elegant resort in Britain. We stayed in bed and breakfasts with sumptuous breakfasts; we watched senior citizens lawn bowling.  I ate rarebit.  We went to the Circus and the Royal Crescent. We laughed our heads off at the Bizarre Bath Comedy Walk.  We went to Glastonbury Abbey under gloomy skies.

In Wells, we found quintessential British homes and gardens and were moved to tears by evensong sung by a men and boys choir at Wells Cathedral.

In the Cotswolds, we had lunch in the Plaisterer’s Arms Pub, and ventured to Sudeley Castle, where we enjoyed boxwoods, topiary, a knot garden and the Queen’s Garden. We bought an Ordnance Map and walked through rolling hills dotted with sheep and pheasants, and traipsed across farms to the remains of a Roman Villa, including a mosaic floor in some woods near Winchcombe. We stopped in charming villages such as Stanton and Chipping Camden, with their thatched roof cottages and well-tended gardens.  We walked from Bourton-on-the-Hill through sheep fields and cow pastures, over stiles, through gates abutting cattle grids, and past the incongruous “Indian Palace” of Sezincote Manor. Rye Farmhouse became the house of my dreams. We drove through picturesque villages such as Upper and Lower Slaughter and the overly touristy Bourton-on-the-Water. We were overwhelmed by the sprawling Blenheim Palace, too grandiose and pretentious for my taste.  We met wax figures at Warwick Castle and imagined horrors in its torture chambers and dungeons.

In Windermere, in the Lake District, we stayed in the boathouse at the gorgeous Langdale Chase Hotel, where Mike got a stomach flu. I picked my way through a million bones in kippers. I took English baths while drinking a pint or two. We visited Dove Cottage, Wordsworth’s early home, in Grasmere. We strolled through Rydal Water in search of Wordsworth, while the confused skies sprinkled, drizzled, poured, and periodically glowed with sunlight. We rode the Steamboat Gondola on Coniston Water. Near Keswick, we took a six-mile hike up Cat Bells and alongside Derwent Water.  The sun popped out to give us magnificent views over the Lake District.  We were awed by the scenery as we drove through Kirkstone Pass amidst rolling mountains, sheep pastures and stone fences, from Ambleside to Glennridding to Ullswater.

We drove east across Yorkshire Dales National Park and stopped in the atmospheric Fountains Abbey, where we found schoolchildren dressed in monk’s habits doing a monk reenactment.

Finally, we ended up in London. Our time in the capital was too short.  We only had time for the Thames, St. Paul’s Cathedral, Hyde Park.  We glimpsed Kensington Palace, stopped by Buckingham Palace, and delved into Westminster Abbey.  We wandered through Notting Hill and the Travel Bookshop — the model for the bookshop in the movie Notting Hill.  We marveled over tiny British cars and double-decker red buses.  We mingled with the pigeons at Trafalgar Square. To top it all off, we enjoyed a play called Quartet at the Albery Theater after a dinner of spicy Indian food. 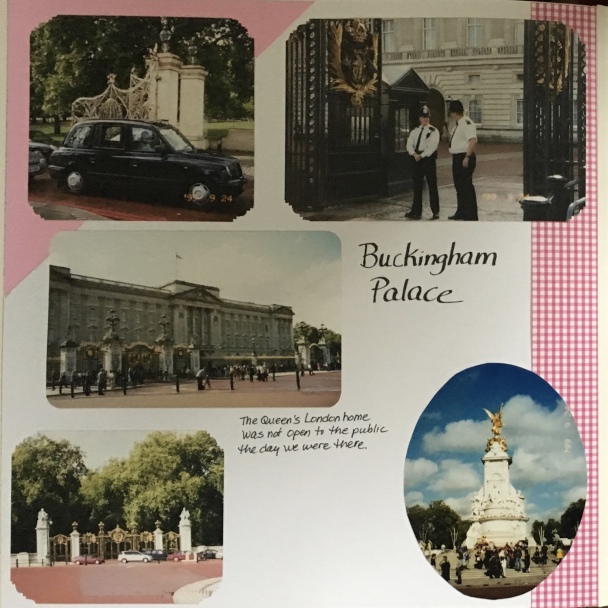 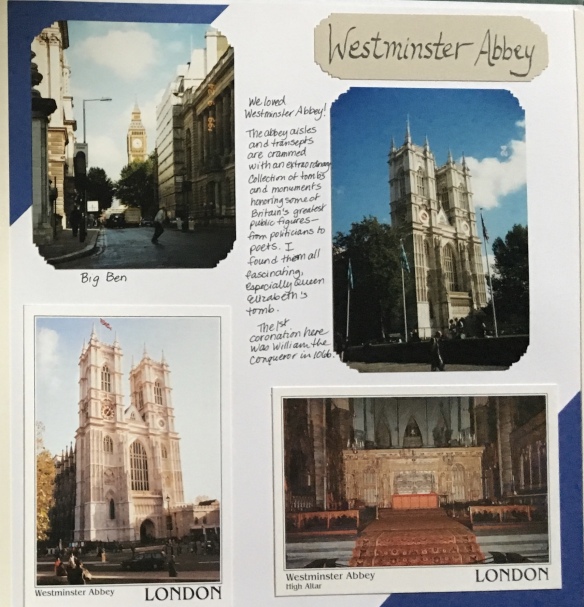 This trip marked a turning point in my life.  My once sheltered and constrained life would become increasingly interspersed with travel.  My nomadic side kicked in, and I sprouted an adventurous side. While during the first 43 years of my life I had only traveled to four countries, including my own, I have now, in the last 20 years, traveled to a total of 30, with return trips to several countries (France, China, Japan, Canada, Spain and Portugal).

As 1999 was before the digital days, I spent endless hours putting my photos into a scrapbook. I wrote a villanelle called: schoolchildren at abbey ruins. I also wrote a poem about Evensong at Wells Cathedral, which is scheduled to post on November 2. I loved creating something from our journey that would bring back happy reminders whenever I cared to revisit them.

Most importantly, this was the beginning of a more confident and adventurous me. 🙂

While I’m in Spain walking the Camino de Santiago from August 31 – October 25, and then in Portugal from October 26 – November 6, I kindly request that if you write a “returning home” piece, please simply link it to the appropriate post, this one or my next one as soon as it publishes.  I will try my best to read your posts while I’m on my journey, but I won’t have a computer or the time or ability to add links to my posts.

Thanks to all of you who wrote “returning home” posts following intentions you set for yourself.  🙂